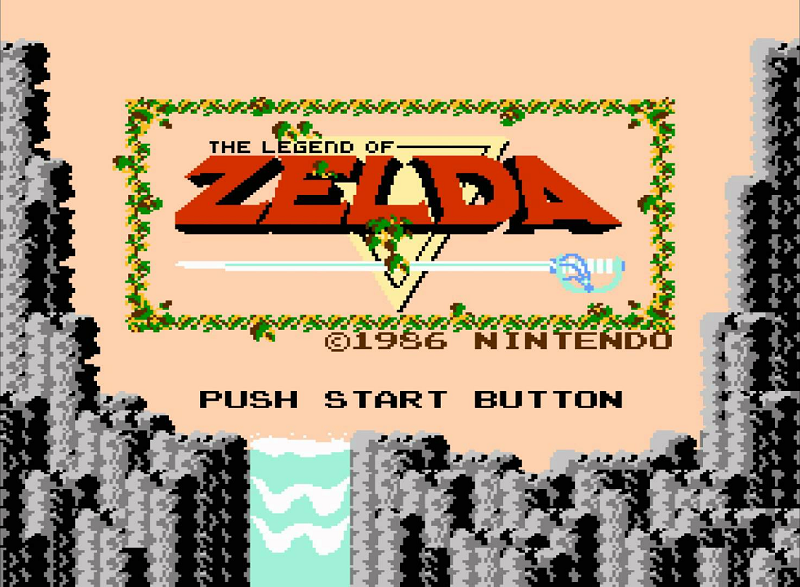 Writing a retrospective on the entire Zelda series is one of the ideas I was playing around with when Legacy of Games was originally conceived. From its very first release all the way to the upcoming Breath of the Wild, this franchise has always been a darling of gamers worldwide. It is with great pride that I present to you our review of the game that started it all: The Legend of Zelda for the Nintendo Entertainment System.

In a little country located in the world of Hyrule, a legend existed about a mythical relic called the “Triforce” that was said to contain great power. When that legend spread abroad, an army of darkness led by a monster known as Ganon invaded the country in search of it. Princess Zelda foresaw that Ganon would come and split the Triforce into eight pieces and hid them across Hyrule before she was eventually captured and locked away. Her nursemaid Impa escaped and traveled the land in search of a hero, which eventually led her to a courageous young man called “Link”.

Kind of fun to see how this grande series that in recent years introduced some really complex story-lines and had to release a massive book to tie the lore together started with a humble fantasy tale. Since this is the Nintendo Entertainment System most of the story I just told is found in the manual that accompanies the text with some nice illustrations of our hero. It’s small and simple, but gives the player just enough to be invested in the adventure.

Link has to journey across the world and find the temples, then defeat its guardians and reunite the eight pieces of the Triforce before he can face Ganon. On his way he’ll meet various various people that provide cryptic hints to help him along or sell him the equipment he needs to do battle with Ganon’s army. What’s more classic than a knight on a quest to save a princess from monsters?

A knight with no sword

While there is no clear definition for the term “hand-holding” when referring to video games, it is generally used to imply that a game won’t let the player figure things out themselves. This can mean the game always shows you what path to take or features overbearing tutorials. If we go by that definition, then the first Zelda game is the antithesis of just that; the game starts you off with nothing and trusts that you are capable of figuring it out.

At the start of your adventure Link doesn’t have a sword and only 3 hearts that represent his health. You have a shield that can protect you from ranged attacks, but even then you don’t have a clear map or directions to go by. In fact, from the very first screen you can head in 4 different directions. Many people will quickly find their sword in the most logical of these and proceed on their adventure. You’ll quickly run into some of the game’s easier enemies and stores and secret areas are always nearby, yet it’s up to your judgement in what ways to interact with these. A lot of the game is optional and non-linear, in fact there have been people who got to the very last dungeon without ever picking up a sword. You decide what kind of equipment you need, if any.

The first three dungeons of the game, or at least what players generally accept to be the first three, are all accessible right from the start and you’ll need some items from these places to reach a few of the later dungeons. In that way, the game prevents itself from being too open. Friendly non-player characters will also happily share information with you, so you’re not entirely lost. Still, in this day and age I find that the game is a lot more bearable with a map. Especially later in the game some of the hoops you need to jump through get a bit insane and this way you keep the game at a nice pace where you are regularly making progress.

Each screen of the game is a square the size of your screen with scenery and obstacles in it. Each time you reach the edge you quickly transition to the next. You then have a few seconds before enemies begin spawning at the other edges so that you can’t be caught right after entering a new zone. Combat in Zelda is also a little more involved than you’d expect from a humble NES fantasy title. A button-press will make Link stab enemies with a sword, assuming you picked one up, but if you have full health you’ll also fire a beam that can hit a target at range. This makes it beneficial to play safe since this is a huge advantage, especially when facing off against a guardian of a Triforce piece. Still, you do need to cope with enemies whose tricky patterns or sheer speed can catch you off guard, plus health restoring items can be hard to come by or require you to sacrifice other upgrades.

The other button uses whatever item you equipped on the start screen. These include the bow that always allows you to do ranged damage, a boomerang that can stun foes, bombs to blow up walls that hide secrets, and a candle that spews fire and lights up dark areas. These bring even more variety to the combat and, as mentioned before, not all of them are mandatory. You also acquire static upgrades, my favorite of which is a ladder that allows you to pass bodies of water that are exactly one square in size. Using this, you can position yourself above water and strike at enemies on both ends, a little exploit I admit saved me more than once.

The Legend of Zelda would have benefited from some tighter controls and it actually would implement these in the sequel, Zelda II: The Adventure of Link. Furthermore, some of the enemies are a bit cheap. Besides that, this is a perfectly enjoyable fantasy adventure that provides hours of exploring and a varied combat system.

It’s hard for an NES game to hold up graphically and Zelda indeed struggles to sell itself visually. The various characters and environments look messy and when a lot is happening at once the game’s graphics begin to stutter. It’s easy to forgive the game because of its ambitious open world, but when looking at each individual screen it’s not that exciting.

Enemy designs lean towards the creative and cute, with the Moblins, Like Like, and Octoroks remaining popular foes to this day. Other designs are pretty lackluster and vague, such as the Leevers, Peahats, and Gels that are just kind of hard to describe because they look so random. The good outweighs the bad, but the good is used sparingly. On that same note, non-player characters are all the same handful of people with little to no animation.

3 years into  the systems lifespan I would have expected something slightly better than just serviceable. At least the soundtrack by Koji Kondo does a lot to compensate for these issues.

New game+ in the old days

Managed to beat the game? You can head straight back and do a second quest that provides a significantly meatier challenge. The overworld and dungeons are reworked entirely for this mode, so you only have your skills at the combat system to go on, everything else needs to be relearned. For 1986 this is insane: the game already excels due to its open world and ability to save your progress, so throw in the second quest on top of all that and you have a remarkable title for its age. Heck, many games wouldn’t even go this far today.

Since the game is also loaded with secrets and optional equipment you could replay both these quests many times over, introducing self-imposed challenges like those people who played it without a sword at all or by never picking up the optional hearth containers that expand your health.

While graphically the game is somewhat lacking it makes up for that by vastly outclassing other fantasy titles for the same system. There is a ton of content here and the game is so varied and engaging that you’d struggle to find a competitor for it. Even by today’s standards it’s a game deserving of respect, even when you ignore the rest of the franchise that it spawned. Definitely give it a shot and decide for yourself if you want to play it completely the way it was intended or use a map.