The last two games we tackled here were both action titles, but as we all know there is more to indie games than pixelart and sidescrolling platformers. For example: in early 2014 everybody was suddenly hooked to Shining Rock’s cruel city building game Banished. I volunteered to dive into this nightmare once again and deliver you this review.

There is no real story to Banished. You start up the game and right away you are in command of a budding village, presumably a group of exiles who took what little they had along with them. You have some basic resources, some animals, seeds, and, most importantly, people. With this meager start you need to eke out a living in whatever wilderness the game randomly conjured up for you.

There is no campaign and the tutorial honestly does very little to prepare you for what the game is actually like. There are also no goals to the game besides survival, which just so happens to be the one thing Banished wants to prevent. Your villagers will die of cold or hunger, accidents will claim their lives, or sickness will strike and reap through your workforce without mercy. And of course there is another staple for city building games: disasters. Good luck preparing for those.

Villagers are a resource like any other. You assign them to a specific job you want them to fulfill and they will begin to perform it once the corresponding building has been made and other necessary resources are delivered. A farm can have as many farmers as you want, but without seeds there is nothing to grow. Likewise, a woodcutter has very little to do if the foresters don’t deliver him any wood to cut. Assigning these jobs is done through a simple and easy-to-read menu that you can permanently leave on the screen. Useful considering how often you’ll be moving villagers around between jobs. In fact, you can leave any menu you find useful anywhere on the screen, but sadly you can’t resize them much.

There are also quite a lot of buildings to build and they are divided into easy categories for your convenience. You’ll need houses for people to live in, production buildings that turn raw resources into equipment and clothes, as well as buildings where those resources (stone, wood, iron, food) can be acquired. Then there are special buildings like schools where you can prepare kids to be more useful later or the trader where you can make deals with merchants that pass by from time to time.

The challenge here is that you can’t expand at a consistent rate. You are going to hit roadblocks and I sincerely recommend not getting attached to your first, second, or even tenth village because restarting the game is going to be frequent. One game I’d be expanding happily and gleefully, only for the stone to run out. And while I was busy trying to hotfix that the clothes ran out and the tailor needed leather or wool to fix that, which was an issue because my village only had chickens. One cold winter later I had some stone and everybody was dead. Another game that lasted barely ten minutes placed me so far away from rivers and in such awkward terrain that hunger struck before I could set up the infrastructure to get food from faraway places.

This may sound like the game is fond of beginner traps and it does indeed mellow out once you get well on your way. Once you have the village set up in such a way that food, wood, and medicine are plentiful it becomes a lot easier and your focus will shift to managing people to make sure your populace doesn’t grow faster than the food supply can handle. Still, the game does have some tricks up its sleeve that will only come into play during longer games, making sure you can’t grow wholly complacent. In one of my games I had a quarry that reliable produced lots of stone, but in the middle of an expansion to my village it ran dry. I had gotten so used to drawing stone from there that I had no alternative, the rocks on the ground had long since been gathered and the quarry left a permanent scar on the land. We ran out of stone and the expansion stopped dead in its tracks, which led to a chain reaction where issue after issue began to pop up.

If you’re an actual city planner then this game might be nightmarish for you and I recommend staying far away from it, but despite the harsh learning curve and frequent restarts it’s actually quite fun. It takes a lot of skill and foresight, as well as a little luck to get a village to last, so when it finally succeeds there is a lot of satisfaction involved. It feels great to beat the odds in this game and go through an entire winter without deaths and I look forward to hitting milestones I set for myself.

The game does wear out its welcome when the randomly generated world messes with you and you end up restarting a lot early on. In some cases I can’t even pinpoint what prevents the game from playing the way I expect it to, such as when builders just flat out refuse to proceed with a project. There is a helpful in-game wikia in times like these, but another issue entirely is that I often reach a limit of what I would like to build. When the village works and expansion is under control it doesn’t take long before Banished runs out of content. There are no fun buildings to build or decision you can make to personalize the way your village works: a functional village will generally look the same for every player. There aren’t even any decorative elements for the base game.

In short: it’s fun to overcome the steep adversity that Banished offers and it manages to keep the challenge up for some time, but it doesn’t have anything to offer once you are up and running.

The visuals of Banished are pretty good and somebody who doesn’t know any better might actually mistake it for the work of a midsized studio. Even I thought it was at least the product of a small team, but Shining Rock is actually just one dude. That almost makes me feel bad for bringing up the lack of content as a negative. Buildings look detailed and nice, both from far away and close by. It’s easy to visually differentiate a house from a gatherer’s hut and while some other buildings may need a second glance, there is no lack of graphical detail here.

The seasons in this game look amazing. From the thick rainfall to the calming snow, it’s great to see the world of Banished shift from spring and summer to the cold autumn and winters. I am especially fond of seeing my villages coated in the white snow, so long as people are still alive when that snow melts away. Banished evokes the image of a cozy mountain village with brooks and people going about their daily lives and it’s wonderful to see.

The music I tend to forget about as I play, precisely because it matches the game’s feel so well. It’s a selection of calming and soothing medieval-sounding tunes. It’s nothing remarkable on its own, but it’s fine to listen to while you plot down new houses and pull the first potatoes of the season out of the ground.

Mods to the rescue

In July 2014 modding support was set up by Shining Rock, allowing users to upload their own content for Banished to the Steam workshop for others to download. I tested a handful of mods and they work fine, so if you find that the game itself is lacking in some fields you can always see if another user fixed that for you. 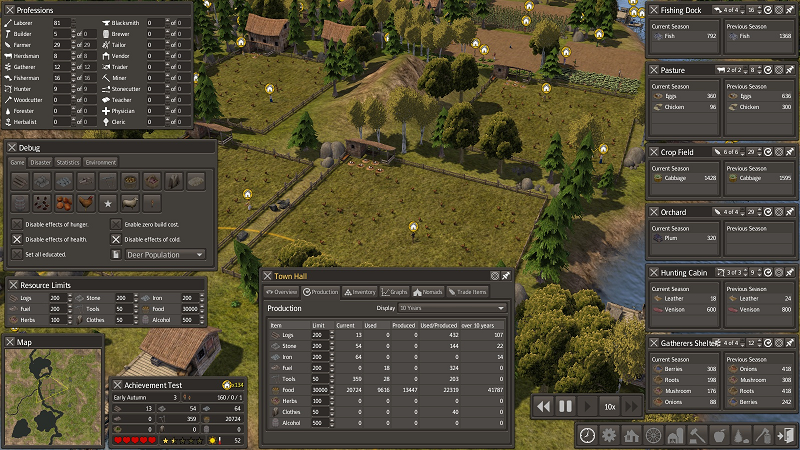 As mentioned before, Banished does have an issue with retaining interest. Since I bought it in 2014 I have installed it several times, played it for 2 hours, and then removed it again. That’s the time it takes for me to set up a self-sustaining village, overcome a number of late-game hurdles, and grow bored of seeing it play out before me. Worse still, it’s not a game that I regularly return to due to the lack of flexibility. I pop it in maybe twice a year for a few rounds, only to find that I repeat the same steps I did before in slightly different terrain.

It wouldn’t be right to say something along the lines of “below a harsh and steep difficulty curve you’ll find a satisfying city builder” because having your ass handed to you and restarting a dozen times IS what you do in Banished. The game is fun for as long as it keeps you occupied with learning how to play it, but once you do you’ll find that there is nothing past that. Unless you’re willing to delve into the modding scene Banished runs out of content quick. At that point it still looks and sound great, it’s also still a very good city building game mechanically, you just wish there was more to actually do in it.