What makes indie developers so good at creating games with strong stories in an industry often mocked for its amateurish storytelling is the lack of people involved. A studio has to cope with multiple writers, directors, and folks at the publishing company all getting involved with the product in development, whereas somebody like Daisuke Amaya can express himself freely and create games he is passionate about. The same goes for Dean Dodrill, a designer who spend three and a half years creating Dust: An Elysian Tail with only a bit of outside help. And it turned out fantastic.

Memories scattered to the wind

It probably won’t surprise a great many people that a game called An Elysian Tail falls within the fantasy genre, but this is not really the kind of world you might expect. Players take control of Dust, a swordsman who awakes in the forest with a bad case of amnesia. He quickly finds a sword, called the Blade of Ahrah, and is then approached by the “thing” that was supposed to be guarding it, a tiny, female fairy-like creature called Fidget. When a voice within the sword begins to speak about Dust’s past, he convinces Fidget to let him borrow Ahrah until its guidance leads to him recovering his memories.

The situation quickly grows sour as Dust, Fidget, and Ahrah find themselves involved in a bloody war between a fearsome general and tribes of lizardmen, which results in tragedy striking all across the land of Elysium. On his journey of self-discovery Dust helps out wherever he can, but it soon becomes obvious that he’ll eventually have to meet with both sides of the war and neither will be exactly happy to see him.

The characters in this game belong in a gaming hall of fame. So rarely have I seen characters with this much personality and dialogue that flows so naturally, and to think this is one guy’s solo project instead of the next big Bioware epic is kind of stunning. I really like Fidget, for example, and that is saying much for a play on the Navi-like, annoying sidekick character. She has all the basics to fit that role, as she talks much, is way too hyper, and freaks out at the first sign of danger, but there is a human element to her that transcends the regular stereotype, which really struck me in the big emotional twist of chapter 2.

Big emotional twist? Yes sir, there is plenty of that to go around in this game. Another grievance I have with so much game writing is that it eschews emotion because that is all stuff you can’t put into the trailer or hype up in your marketing campaign. Rather than putting all of its emotional content in one big scene, as so many games do (the “Dom’s wife effect” if you will) Dust has a healthy helping of the stuff throughout. Like in Sly 2 there are just as many victories as setbacks for the team, moments where our heroes need to pick themselves up or make mistakes. It’s great storytelling all around.

Combat in Dust is frankly hilarious and if you are looking for a realistic or even reasonable action game, then this is not it. Our hero starts off with a few nice combos and the ability to do battle in the air as well as on the ground, but you soon acquire the “Dust Storm”, a move that lets you spin your sword rapidly. By combining this with Fidget’s magic projectiles you create massive storms of magic and when you figure out how to use the Dust Storm in the air it just goes crazy. Dust isn’t so much controlled as he is propelled, you jump, hold the button for the storm, and he just zooms off into the air; throw in some magic and you basically turn into a plane carpet bombing the foes way below you. This does mean that combat is fairly unchallenging on most difficulty settings and that in turn means that whenever the game wants you to slow down it does become kind of a bother. Eventually the game introduces enemies that require more tact, which feels like it’s holding back your fun more than anything. For example, early on the game teaches you a counter-attack that lets you stun foes and several hours later you suddenly run into groups of enemies that require you use it, but by that point it was never required and frankly kind of useless, so the player is unlikely to know the timing, creating a massive difficulty spike each time even just one of these bastards show up. The other “harder” foes aren’t as bad as this, but do force you to play in ways that don’t really feel ideal or fun.

The game is also a metroidvania, as you will encounter many paths early on you can’t take yet, but which hide great treasures or optional content. The money and items you loot from fallen foes can be used to purchase or craft equipment that give you stat boosts, but there is little tact to this. As long as you make clever use of the merchants you will always be able to keep the best equipment currently available to you at all times. Dust can also take on many side-quests from the inhabitants of Elysium, which send him to even more areas to find specific items for the questgiver. These are fun diversions that often lead to more complex puzzles and platforming sections.

This is all perfectly fun, if a little dry. It’s cool to fly around and destroy foes for a while, solving side-quests and getting interesting dialogue to break up the action, but I wish Dust was better at varying up its combat. A better tutorial to the counter mechanic or more combos would have been ideal, or at the very least not making the dust storm as overpowered as it is. It’s great and full of energy, but it can’t carry an 8-hour long action RPG and I definitely found myself carrying on for the sake of the story halfway through chapter 3 and onwards.

When showing people this game, I often got reactions along the lines of “eh, I am not really into furries” and that is really a shame, as well as kind of a lame argument. This game is full of style and presents players with a large, intriguing world inhabited by anthropomorphic animals, i.e. all the people look like cats, bunnies, and so forth. Mixed with the vibrant and frankly draw-droppingly beautiful graphic style this makes for one stunning game to look at, much less play it. 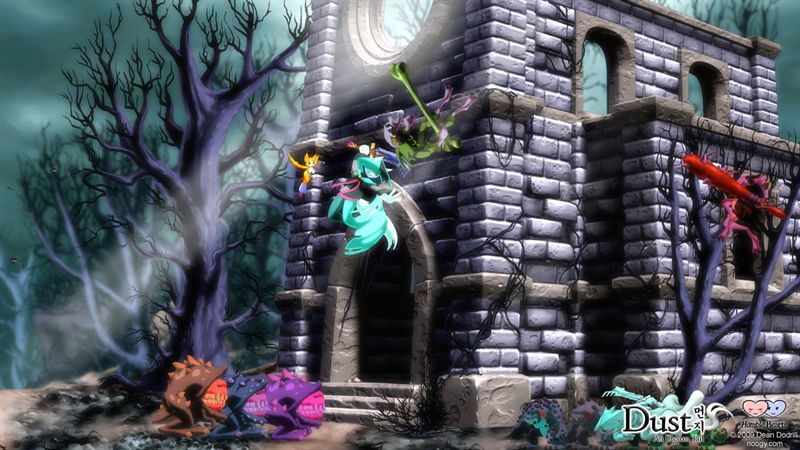 Designer Dean Dodrill famously worked with Epic Games on the animations of Jazz Jackrabbit and it shows that an animator was at the reins here. This is a 2D game, but it features grande vistas and it’s crazy to see all of this in motion. To pass all of that off because you are afraid of being associated with the furry community is truly robbing yourself of experiencing one of the most beautiful games currently available.

The character design is excellent and each voice-actor perfectly matches the looks and personalities of who they play. For a fantasy game the dialects and word choice feel more modern than expected and you hear a lot of voices that don’t really sound like actors acting out a character, and I want you to take that as a positive because it makes the dialogue feel that much more real. Some of the side-characters do not sound as great as the main cast, but that is a petty niggle in an indie game that somehow managed to have an art-style like this and round up this many quality voice-actors to begin with.

I have this tendency to always start a game promising I’ll go for 100% and it then bothers me when I begin to realize how big of a bother that would be. Same case here: Dust: An Elysian Tail features many side-quests and optional challenges you can tackle and not all of these are exactly enjoyable to complete. I had fun doing the first two arena challenges, yet I had grown somewhat tired of them by the sixth. Likewise, hunting all the treasures, which requires treasure keys, is not exactly my idea of fun, especially when they can be hidden really well and the rewards for doing so is a bit of useless currency, some foodstuffs, and maybe an item way under your level. Still, these are pretty easy to ignore if the percentage next to your save isn’t that important to you.

A cooler collectible is found in the “friends”, a series of indie gaming shout-outs that sees characters from other big indie titles pop up as passive bonuses in this one. You’ll notice many heroes from games we covered here before pop up and it’s much more fun to hunt for these than spend your hard-earned treasure keys on the actual treasure chests.

Dust is a game I will bring up whenever the chance shows itself because it’s a really great title that never got as much attention as it deserves. That is not even speaking indie terms, because even there it never exploded the same way that Cave Story or Undertale did while offering something not entirely unlike those games, I feel fans of either of them would be all over Dust if they knew about it. This game snuck in under the radar a bit too much, even I had to learn of its launch through a Youtuber I had only started following the day before it, and since then I haven’t heard of it anywhere else. Go play it if you can.