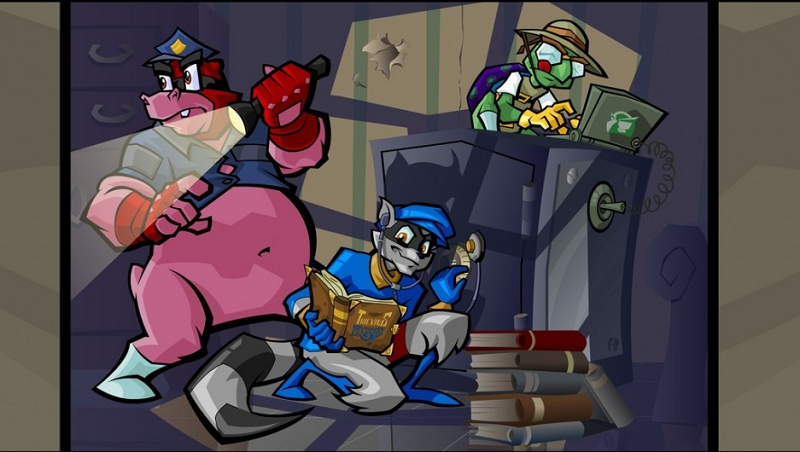 Editor’s note: some of the pictures in this review are of the Playstion 2 version, not the HD remake. We apologize for this inconvenience, but promotional material and screenshots of this game are remarkably hard to find.

A few years ago this would have been the end of our journey. For 8 years Honor Among Thieves was the final note in the Sly trilogy, a series of 3D platformers following a group of career thieves. Fortunately, that note was not sour, Sly 3 is a beautiful and polished game that finally managed to assemble everything great about the series, expand on it, and suppress the parts that weren’t as good.

For the first time the first level isn’t necessarily the start of the adventure, but rather the end of it. We kick off with a big heist that has Sly and his friends, as well as a number of mysterious, new party members, raid an island where the Cooper Vault is located. This vault is Sly’s birthright, the storage where all of his ancestors hid the treasures they collected in their lifetime. However, a mad scientist has since bought the island and has been trying to breach the vault for years; as the heist takes a turn for the worst, we flash back all the way to the start of this adventure, after the events of Sly 2: Band of Thieves.

Murray has left the Cooper gang out of guilt for failing his friends in the final battle and Bentley is now bound to a wheelchair. When Sly learns of the location of the vault, Bentley mentions that the two of them are not enough, they are going to need Murray back, but they’ll also need a number of other expert thieves to get the job done this time. As is traditional for this series: there is no problem that can’t be resolved with a roadtrip, so Sly and Bentley fly to Venice to start assembling their new team.

The story of Honor Among Thieves is easily the best the series has seen so far, even though it lacks the more dramatic and emotional touch that part 2 brought to the table. The characters have never had this much chemistry and personality before, which is even more impressive considering how many new ones are brought in. The new members of the gang, which are kept secret in the prologue sequence, all have fun personalities and their stories keep going even after the episode they are recruited in. I am especially fond of a romance side-plot that spans several chapters before coming to a charming conclusion.

I will say it’s weird to see recurring characters like Murray and Carmelita having their personalities rewritten once again. In the first game Murray was a dopey comedic relief whereas in the second game he became obsessed with a superhero persona. At the start of this game he’s all zenned-out and obsessed with spirituality, only to quickly lapse back into a destruction-hungry bruiser. Carmelita’s development makes even less sense, as she was shown in both previous games to have a sweet spot for protagonist Sly, only to now have a very hostile attitude at the start of the game that mysteriously vanishes by the end. She also plays a much smaller role now despite having actual, playable sequences. It was great, however, to see characters from previous games make a return here.

To add to this the villains are better than ever before. They are charismatic and receive plenty of development and screen-time, which was an issue in the preceding games. Each episode feels like a satisfying, self-contained story that helps build towards the final goal of raiding the vault. It feels less like a continuous journey than Band of Thieves, but this structure paces the story in such a way that you are regularly seeing a story-line end.

More of the same, but better

I was worried Sly 3 would follow a similar strategy as the last game and just throw everything out the window to build a whole new game with few similarities to its predecessor. While a lot of mechanics did get thrown out, the core gameplay remains the same this time. You pick one of the three characters: the nimble and agile Sly, the gadget-focused Bentley, or the heavy fighter Murray, and move around an open area where you can find markers that kick off story missions.

In-between missions you can wander the location to explore and familiarize yourself with the layout and pickpocket guards for cash that can be spent on new moves. Once again, it’s a shame that few of these abilities see actual use outside of the ones that are passive upgrades or mandatory to story missions, but it has to be said that level design is miles better now. Sly 2 suffered from annoying layouts with lots of verticality that made playing anybody but Sly a major hassle. Now the levels are actually really well designed with clear paths and easy ways for other characters to reach higher areas.

The collectibles in each stage have been scrapped, which does admittedly leave them bare and it means you need to do much more grinding to get coins for new abilities, since treasures only come into play near the end of the road. While it was annoying to scour a massive map for the small, easily-obscured bottles it’s an issue I would have preferred to see fixed, not removed. On the positive side, missions are now a big departure from the regular platforming you do to reach the markers, featuring many more gimmicks and gameplay styles. All the party members you end up recruiting are playable in missions, which gives you so much more variety and abilities to play around with. While there are still pure, platforming challenges to be done, mostly as Sly, everybody else now performs odd tasks that see little repetition, yet another issue that plagued Sly 2. This game is never monotonous; one moment I am rowing a small boat through a battlefield and a moment later I am racing up a hill in an RC car trying to reach a bomb before the fuse leading up to it. The diversity is much appreciated.

The game also controls like butter thanks to improved combat mechanics and less glitches. In fact, I didn’t really have any frustrating encounters that were entirely on the game, most were actually my own dumb fault. If there is one issue I have, besides the lack of collectibles, it’s that the game features dialogue options that don’t really matter. You don’t actually get to make a choice here, any wrong input will  loop you back to the choice. But really, compared to how fun the game is now, complaining about that is akin to nitpicking since you still get fun lines of dialogue out of it. Sly 3 is simply a blast to play.

What I always liked about the Sly series is the use of real-life locations for the levels and this entry definitely continues this proud tradition. Each level is the manifestation of a country’s stereotype and nowhere is that more apparent than the Holland stage. I actually live in The Netherlands and to see a level like this was hilarious to me. There are windmills and farmland everywhere, a major dyke that you actually end up breaking and which permanently changes the level layout, cheese for bounce pads, and the star of the stage is a fighter pilot called The Red Baron. It’s absurd and I love it.

Never before has the series managed to so well emulate the joy and creativity of fifth generation platformers. With the music that fits the design of each stage to a tee, animal people for guards, and a bright color palette I found myself enjoying every moment of Sly 3.

It’s a shame I never played the original games because that makes judging the quality of this HD remake a lot harder. I was a lot less bothered by the models this time around and I have pretty much accepted by now that the cut-scenes are in 4:3. Models still occasionally glitch out visually, but it’s overall a lot less noticeable. Worse was a sound glitch that made the entire exterior of the final area sound like my TV was about to explode and some shoddy sound-direction that had background music drone out important dialogue.

The voice acting is top notch, though I do dislike that once again we changed Carmelita’s voice actress. Alésia Glidewell carried the character perfectly and the same can not be said about Ruth Livier, who sounds a lot more stiff and directionless. Everybody else sounds perfect, especially Matt Olsen and Chris Murphy who respectively play Sly’s lifelong friends Bentley and Murray. Annette Toutonghi brings a new female voice to the table in the form of the geeky engineer Penelope and many returning voice actors from previous games sound great too.

As mentioned before, many of the collectibles and optional stuff you could do in the series have been removed. Sly 1 had the time trials that were lost in the transition to Sly 2 and now we have lost both the bottles and treasures from that game, leaving missions and exploring as the only interaction you have in the worlds themselves. 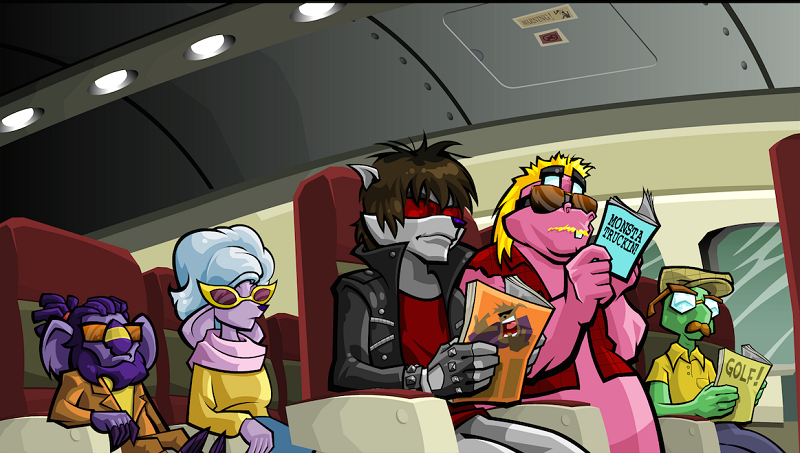 “Removed” is perhaps no the best word for it, since just “moved” would be more apt. If you exit back to the title screen and select a chapter you have the option to scroll through a number of challenges. These are generally opportunities to replay older missions, but with an additional criteria added to it. Usually these will be strict time trials or force you to complete a mission while collecting X amount of coins or not taking any damage. Later in the game you also unlock a final mission type where you have a pirate map and must follow cryptic hints to find a treasure.

While these offer some extra challenge for those that seek such, I personally wasn’t too fond of either. Replaying the entire game with some extra conditions to it isn’t exactly fun and I think it would have helped if the developers made it so that the challenge is already there in the story mode. Like, once you start the mission, a little message in the top corner informs you what extra task you can try to do. The pirate maps, while new, aren’t that exciting to do due to their slow-paced nature. This does mean that Sly 3 is definitely the hardest game in the series to score 100% on. Despite this lack of optional content, I do feel confident in saying that I’ll happily replay this game, more so than the previous entries. It’s the most consistently-entertaining entry in the franchise and missions are the least tedious they have ever been, thanks in large part to the absence of game-breaking glitches.

Sly 3 should not be underestimated under any condition. I feel that it’s really easy to look down on kiddy genres and that some may subconsciously add the words “for a mascot platformer” to any of my praise above. Don’t. This is an excellent game with a brilliant story that easily outshines many “mature” genres and I honestly wasn’t prepared for that either. The quality of the writing shocked me and it’s supported by a solid game with great art and sound that rarely disappoints. If you are able to resist that shiny platinum trophy at the end, then this is a near-perfect game.