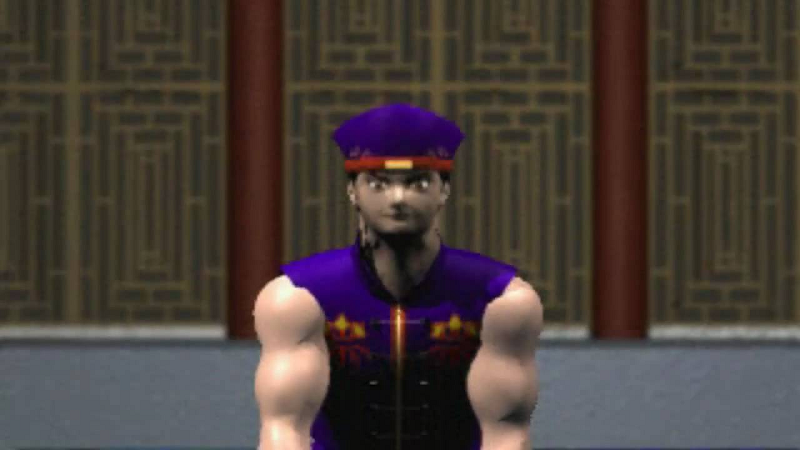 I have many guilty pleasures when it comes to videogames, but one that most people are sure to know (and love to criticize) is the Dynasty Warriors series. Since my plans to review TimeSplitters are delayed until I can buy a working Nintendo GameCube controller I decided to seek out the very first entry of this series, only to find it’s a different kind of beast than I was expecting.

When games came with a manual

Dynasty Warriors is set after the fall of the Chinese Han Dynasty somewhere in the year 220. With three great warlords all trying to rise to power in the provinces of China, their greatest warriors have now stepped forward to duel it out in one-on-one battles against each other.

Like with so many older games the story of Dynasty Warriors is safely tucked away in the manual, so if your copy came without one (as it did for me) then you get to look around online for a PDF file. Even then the setup contained within is pretty minimal and fits on one page, with each individual character getting an additional paragraph of their own some pages after. While the character bios are neat very little of this plot shines through in the actual game as its campaign mode is just a series of battles against random opponents.

The fact that this game is a one-on-one fighter is a bit troubling. There are several genres I would rate as my “strengths” when it comes to reviewing and tournament fighters are definitely not one of them. Regardless, I did the best I could and found myself being somewhat fond of Dynasty Warriors despite not enjoying several of its design choices.

The game is semi-3D, featuring opponents shuffling towards each other on a 2D plane, but allowing them to sidestep and roll around the other, turning the 2D playing field along with them. To engage in jolly fisticuffs you have two types of attacks that can be combo’ed together, as well as a list of around eight moves per character that require a specific input to work. And that’s kind of where the game loses me, I am not fond of fighting games where your chances of winning depend on how well you can execute its special moves. Even when I know the input for all the moves of a character I can’t reliably get them to do it, and of course the AI doesn’t have the same issue. Regular hits take away a pitiful amount of health, but any fancy stab the opponent throws at me can potentially drain up to 80% if I am not quick to dodge.

What I will say is that the moveset is enjoyably complex and that compensates well for the slow, stiff movement of your characters. Everybody has a jumping attack to quickly close the distance between them and the opponent, for example, and there are two types of counters (one for stabbing moves and one for slashing moves), as well as a grapple move and different “musou” attacks when you have filled a meter. Adding the special moves on top of that and you have a lot of options to deal with various situations. 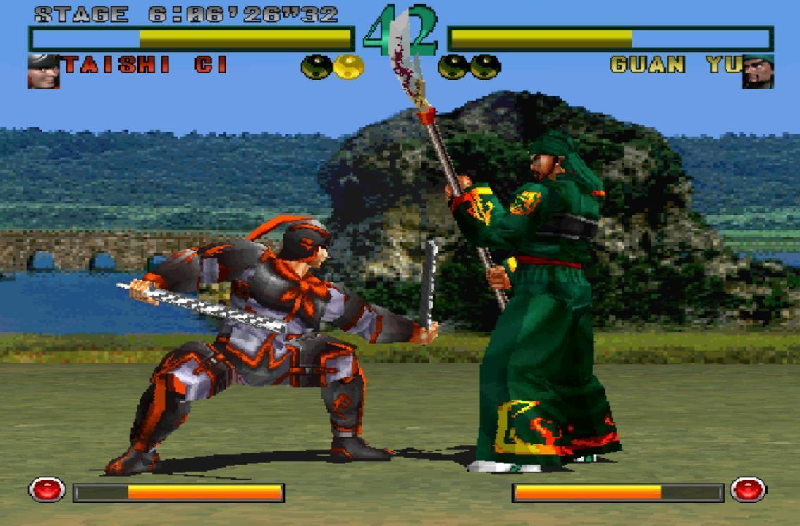 The character roster is also enjoyable, featuring both famous heroes and lesser-known generals, including my personal favorite Xu Zhu. Everybody has their own kind of weapon that yields different benefits. Sadly Xu’s massive hammer doesn’t seem to do anymore damage than a stupid, little knife, but at least he can hop around on it like a pogo stick and do massive damage to downed enemies.

Overall I can enjoy a few battles in this game, but the stiff movement and stubborn special moves keep it from being a title I would regularly return to.

Dynasty Warriors looks like a vastly improved version of Virtua Fighter, featuring a very polygonal character design that looks surprisingly appealing. There is enough detail to make each character look complex and the colors are well chosen and utilize a lot of shading, making the clothes and armor look stunning for their time. Voice lines also sound great and there are a lot of neat animations for attacks and victory poses.

The arenas this all take place in are simplistic. Everything is just a flat platform with a fancy background and most of those are recycled several times for day, noon, and nighttime atmospheres. These are sometimes nice, but generally dull and uninteresting.

Dynasty Warriors 1 is something else and that something I am not sure will resonate well with the people who consider themselves fans of the series today. While it has a lot strengths, such as the neat character bios, varied moveset, and great use of colors, the Dynasty Warriors series is fun because you can casually start it up and just wreck dudes up for a few hours. This game doesn’t have that, it requires a lot of learning and practice to even unlock some of the fan favorite heroes; it’s the kind of game that will bash you around until you put in the dedication to get good at it. And really, why would you put that effort into an average-at-best Playstation 1 tournament fighter…