Hi, and welcome to another new type of article I wanted to try out for Legacy of Games. With games being as popular as they are, a release of a particularly big name often goes accompanied with many extra products on the side. This can be merchandise along the lines of cups with Mario on it or the Pokémon wallet I had as a kid, but sometimes we get an interesting product that is definitely worth talking about. In rare cases, the popularity of such a product may even eclipse its original source!

The female duo who write under the pen-name of Akira Himekawa have written adaptations of the Zelda games for several years now, giving each entry in the games their own unique spin. What makes the Oracle games in particular stand out is that, rather than adapting the story of the games, the duo chose to take elements from them and create a completely different kind of story; one that would never fit within the constraints of gameplay or the kind of experience we are used to from the Zelda series.

This saga starts in The Legend of Zelda: Oracle of Seasons wherein Link is cast as a young farmer living with his grandparents. He is the latest in a long lineage of knights, but due to his grandfather forcing him into continuing the tradition, he isn’t particularly hyped for the upcoming knight trials at the big city. When he ends up going anyway he finds himself getting lost and running into a temple where the Triforce, as it does in the actual game, teleports him to the distant land of Holodrum. 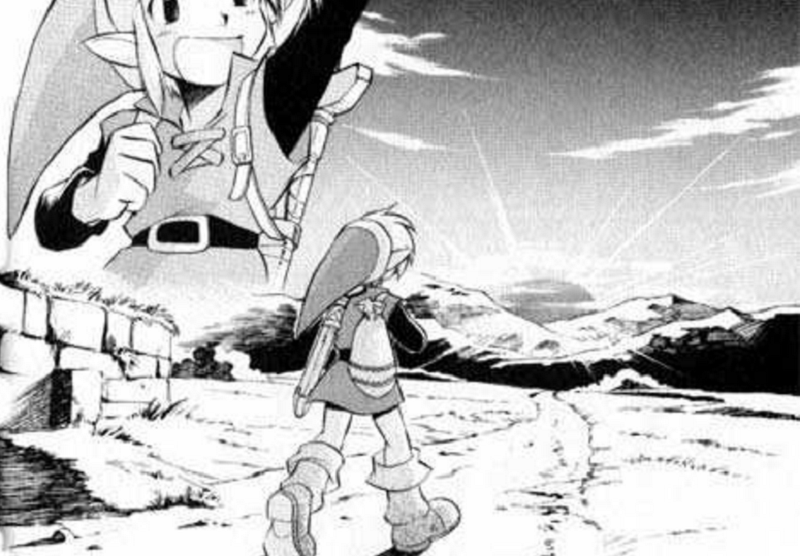 Link meets with Din and her troupe, spends some time with them, then has to spring into action when the General of Darkness takes her away and sends the Temple of Seasons plummeting into the underground realm of Subrosia. The manga reads like an abridged version of the game as Link journeys around Holodrum for a bit, teams up with characters from the game, then confronts the big bad guy at the end. Link is given a lot more personality and an animal companion in the form of a chick he helped hatch back at the farm. Whereas I felt the games were lacking in any real excitement, the manga does pull off some really interesting moments and setpieces, like when Link and Ricky are trapped and forced to fight every boss battle at the same time, as well as some genuinely emotional scenes.

My main complaint with the older Zelda titles is their lack of storytelling and this adaptation fixes just that. It takes a game that focused primarily on gameplay and took elements from it to restructure the whole piece into a more engaging narrative. Not everything in the game is addressed and a whole lot of characters are absent or glanced over. Some events are also explained away a little too easily, like Link gaining the ability to speak with animals and his chicken just magically becoming an all-knowing source of information so she can provide exposition, but if you are like me and these classics don’t really intrigue you, then this is a perfect alternative.

That brings me to Oracle of Ages, which is nothing if not an odd duck. This book is posed as a direct sequel to Seasons and starts Link off in Labrynna where he meets the Oracle Nayru who, what else, promptly gets kidnapped. Link chases after Nayru by hopping into a portal back to Labrynna’s past, where he finds that the people have been oppressed by the dictatorial regime of their once-benevolent Queen. Rather than having Link travel and fight monsters, he winds up becoming involved with a faction of revolutionaries hiding out in a hidden village, where he starts helping his own ancestor free Labrynna from Ambi and the possessed Nayru’s grasp.

This is why I find the Oracle saga Akira Himekawa’s most interesting work, because it distances itself from the typical proceedings of the video game to instead focus on putting Link in a whole different situation. Link is a knight, now caught in a land filled with political turmoil and whose ruler is being manipulated by a scheming adviser. It’s a tale of revolution and Queen Ambi is perhaps the most intriguing villain this series has ever seen, as you really get a sense of why she would do the things she does. The finale of the books also makes for a great surprise, both in what happens and how it is resolved.

So, yes, these books really have the storytelling down, but how does it hold up in the art department? Well, that is where things become a bit tricky. Akira Himekawa is really good at drawing characters… when they get a full shot to themselves. There are some really gorgeous panels here, showing off the best of both male and female characters. Especially Nayru, the Oracle of Ages, has some really nice drawings. Except, this is balanced against the many, many times when the designs look off or events make very little sense. Characters that do anything other than strike an emotional pose just look off and designs that were simplified are just blatant, with even main characters sometimes missing a mouth, eye, or just having no face in wide-angle shots.

While the presentation manages to pull off some cool moments, it’s not really a book you read for the action, for the same reason you don’t really play most of the games for their combat either. Humor, then, is something Akira pulls off a lot more reliably, with a mix of scenes that are just plain funny and a good use of exaggerated expressions. In fact, I think this series may actually have my favorite example of comedy through expression. Sometimes it’s a tad overbearing, but in general it helps create a strong mixture of comedy, characters, plot, and action, that makes these two manga fun to read. It really feels like you get a balanced package here, as the comedy doesn’t detract from the serious moments or vice versa. In fact, all the elements join together and strengthen each other.

If you are interested in trying these out of yourself, then the Oracle stories I personally recommend, but there are a lot of adaptations available. In fact, you can order a boxset that contains a bunch of them, including these two I reviewed today, and popular ones like Ocarina of Time. You may want to wait, however, because Viz Media is releasing the Twilight Princess adaptation soon.