It’s not often that I purchase games on their day of release and even rarer are the occasions where I’ll do so without any prior research at all. I really enjoy music visualizers, however; games where the gameplay, presentation, everything is decided by the music you are listening to while playing. When I saw Melody’s Escape‘s beautiful screenshots, I just knew I had to buy it.

Turn up the volume

Melody’s Escape is a runner game in which you control a girl wearing headphones who goes out for a run. This isn’t your ordinary jog around the block, because you select a song to play that will then turn into a level itself. The resulting course will feature hills, large gaps, obstacles to jump over or slide under, and walls to kick down, which you do by following the button prompts the game shows you. 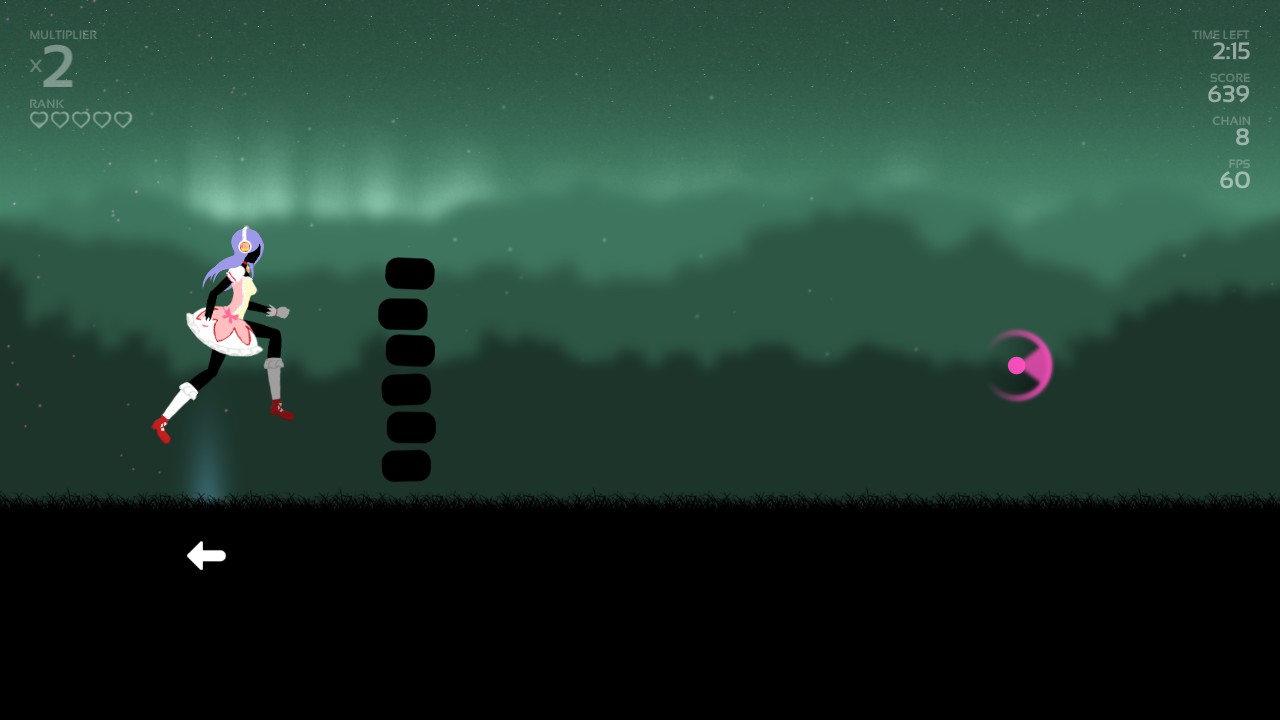 What the prompts are depends on the difficulty you play on. On Relaxed and Medium you only have to bother with the arrow keys that correspond to the symbols and arrows the game shows you, but on Intense and Overload you will also have to use WASD for the symbols and the arrow keys for the arrows, which is just a little too crazy for my tastes. Fortunately, you can also opt for an in-between solution with custom, where you can set your preferences for speed, density of notes, and what input methods you prefer, as well as how forgiving the game is in general.

As your character runs through the course you just keep following the prompts to keep her going. Missing a symbol will cost you your multiplier and points, but missing an arrow, which correspond with actual obstacles, will make your character trip or run into it. The only punishment for this is that you respawn seconds later and miss out on all the points you could have collected in that time. There is no real goal to Melody’s Escape beyond visualizing music and getting as high a score as possible, unlike games like Beat Hazard and Symphony that feature boss battles and such. This is just a game to chill out with and that goal it realizes perfectly. 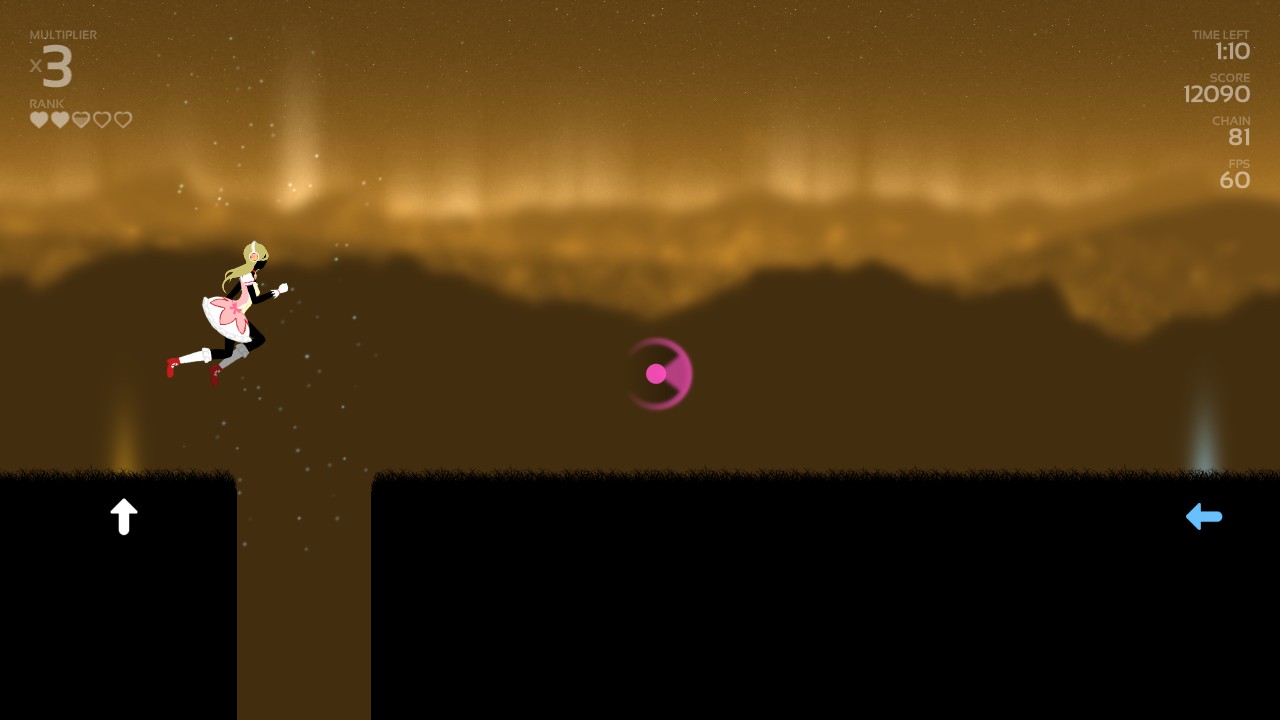 A mayor annoyance is that the degree to which the game actually lets you interact with your music is questionable. I am not a musician and can’t really comment on the relation between sound and the levels Melody’s Escape generates, but it seems more concerned with the pace and volume of the music, rather than the notes, and even that is often vague. The songs that come with the game work excellently, but most other tracks I tried varied in quality and none came even close to matching the special effects shown in the included songs. While speed is not an issue most of the time, only a few songs had prompts that actually matched the music, whereas most just have you press random buttons at seemingly random moments.

Even that is fun though and the game is forgiving enough to let you mess up a few times. Missing any of the inputs only has gameplay consequences, it doesn’t mess with your music and you can (and probably should) turn of in-game sound-effects in the menu. Whenever I feel like listening to some music and I don’t really intend to do much else while I am at it, I figure I might as well fire up this game for a few runs.

I don’t know what’s going on, but I like it

The game doesn’t provide much context for what it’s about, besides a girl called Melody that runs and has to avoid obstacles while collecting orbs. What the visuals represent is, of course, open to interpretation, but at least they are really cool to look at. Melody herself is designed either with a white or black body with clothes that contrast nicely and hair that changes color as you grab orbs. You have multiple options for different clothes and hairstyles to choose from, all of which look the same as I just described.

The world around her is colorful but dark, like a nighttime blue or a yellow that almost looks like things are on fire. The overall color of the screen depends on the pace of the music, so during slow parts you have a city background that turns to dark forests as the song picks up, only to literally explode into color when songs reach their peak. It’s a beautiful spectacle and fortunately the game is easy to play so you can safely enjoy it without screwing everything up.

The animations on Melody are also satisfying and, to me, the imagery of her kicking down walls, grinding on rails, and just bursting out into full sprints as the city skyline fades away is a nice representation of music allowing us to forget what’s around us.

Perfect for anime music. I tested it!

A rhythm game like this can be played for as long as you like and so long as you have music to put into it. You also don’t have to worry about compatibility; everything I tried running through the game just worked and it worked fast, with songs being translated into stages so fast you’d almost think it already had the song cached beforehand. When it first came out I did have some problems with the visuals being headache-inducing, but fortunately that seems to have since been fixed.

If you want to work towards some goal while playing the game, then you can try to beat your own highscores or get hearts for your music. Hearts represent how well you did overall and you can get a maximum of five per song. They fill gradually and deplete a bit when you miss notes or trip up. It’s really satisfying to get all five hearts on a song you like and even better is perfecting it, whereupon the hearts will turn orange. There are also 8 achievements to get with the toughest demanding you perfect 10 songs on intense and play a total of 100 different songs.

More interesting, though, is the active modding community. You can download tons of different costumes for Melody through Steam’s workshop that become available pretty much instantaneously. In the picture I used here you can see me using a Madoka Kaname skin that I got from there (for free, of course). Seemed fitting since I have a large library of Kalafina songs.

While not all the workshop content is guaranteed to be of high quality, it’s amazing to see how much you can download and how easily the game can be customized.

If you want to play something while listening to your own music, then Melody’s Escape is a really cool and relatively cheap option to go with. While it isn’t nearly as good at actually matching the levels to the beat of your music as it claims it is, it gives you something cool to play and look at as you go that sort-of matches the pace of the songs. It’s visually pleasant, fun, and comes with a few nice tracks that make the most of the system it uses.

One thought on “Melody’s Escape”