During my time at Rely on Horror I was the person in charge of handling all the indie games. Hundreds of titles came through my mailbox hoping to make it to the front page of our website and after a while I grew allergic to the marketing blurb “lovecraftian horror”. I must have played dozens upon dozens of titles claiming to pay homage to the legendary H.P. Lovecraft and few of those managed to actually capture his iconic style of horror. Eldritch was, at the time, an amusing game to find in my inbox, as it didn’t market itself claiming to have Lovecraftian horror and instead just admitted to plundering Lovecraft’s lore entirely.

Countless years prior to the start of the game humanity was pushed to the brink of extinction by The Great Old Ones, cosmic Gods that humanity stood no real chance against. The survivors eventually discovered a ritual that allowed them to lock the Gods up in a labyrinth where they slumbered for a long time, until archaeologists disturbed their sleep and unleashed the creatures upon earth once again. This is where you come in.

You awaken as the only soul in a massive library chosen to be the site where the Gods will be locked up once again. This story is mostly told through the books you find both in the levels themselves and the hub area, allowing you to either study up on all the lore the game has to offer or to play it without bothering with it. If you choose to pursue it then you’ll quickly learn that the plot isn’t too deep, ripping deities straight out of Lovecraft’s Cthulhu mythos and using a more easy writing style than that of the early 20th century author it borrows from. Information comes in short, single paragraphs and is straight-to-the-point, meaning the action isn’t broken up by long texts.

Still, for a game basing itself on Lovecraft’s fantastic work, you get surprisingly little story or context here, making it feel more like an action game that borrows some cool monster designs.

The goal of the game is to make it through the three labyrinths where the souls of The Great Old Ones are hidden away, retrieve them, and then tackle one last stage to finalize the ritual. The labyrinths all follow the same structure: they have 3 levels, with each 3 floors, and the exit is always on the ground floor. Everything else is randomized with levels stringing together a fluent maze. The algorithm used for this is actually remarkable, often demanding you drop down to lower floors and find another way up if you want to explore the whole thing, and each level is immediately accessible without any loading screens between different floors. 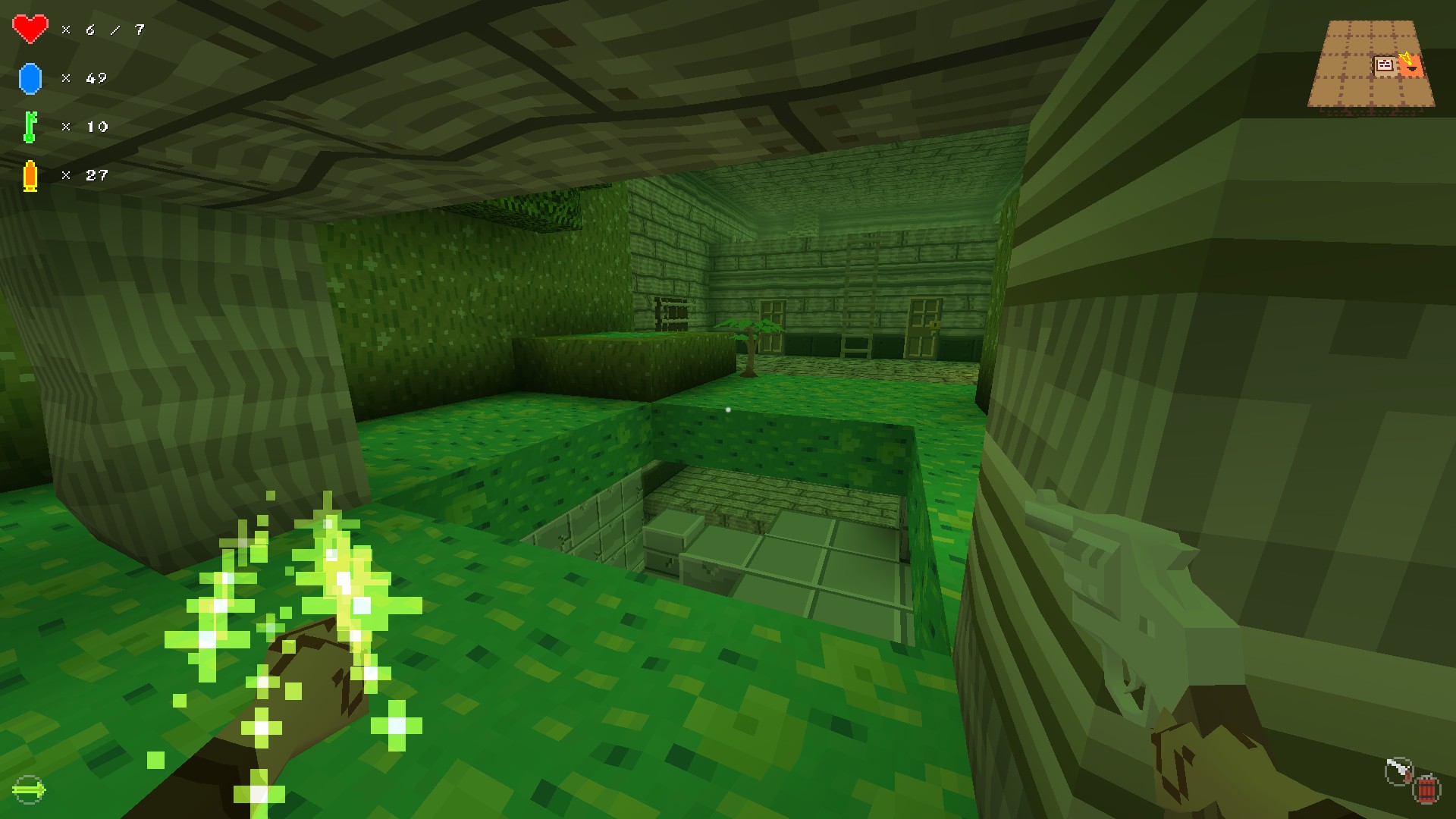 Your character moves quickly, but starts out with a paltry 3 hitpoints that most enemies and traps will rip through in seconds. By platforming, stealthing, and catching enemies by surprise you must make your way through the levels and gather equipment to become tougher. Fountains will permanently upgrade your hitpoints and you can find items like guns, knives, rocks, as well as equipment like boots that silence your footsteps, an emblem that makes you do more damage, or a kit that lets you eat enemies, among many others.

The items in this game are awesome and most of them are really multi-functional. For example: rocks and bottles make for a good early game projectile, but also make a noise to lure enemies away with. The combinations of items you gather open up a vast amount of strategies and it doesn’t take long before you find yourself tackling situations in ways that almost feel like cheating. In my original review for Rely on Horror I mentioned using a powered up gun to shoot a hole in the wall on the opposite side of a gauntlet of nasty enemies and throwing a teleport spell through it, but I also tackled similar moments by letting myself jump infinitely or just blowing up a wall important to the puzzle with dynamite.

You can find these items by either exploring or visiting a shop where you pay with runes, except runes can also be used to cast useful magical spells that were essential in at least two of the strategies I mentioned above, so that’s another multi-functional item to take into consideration. You can only hold two items at a time and equipment works with slots, so you have to choose which upgrades to take and which to leave behind, preventing you from becoming a jack-of-all-trades.

Enemies are also handled excellently and dealing with them requires strategy and patience. Hits scored on them while they are unaware do extra damage, enough to instant-kill the likes of fishmen or cultists, and some enemies can’t get along and can be tricked into fighting each other. You can also loot enemies for runes, bullets, or keys, but this will cause them to respawn somewhere within the maze, meaning it might be more beneficial to you to leave their corpses untouched.

There are enemies that fly, enemies that fire projectiles at you, enemies that are small and hard to see, and, most importantly, enemies you can’t kill to begin with. Foes like the tall mummies or the classic Shoggoths are literally unstoppable and must be avoided or tricked. One hilarious example of this is when I managed to trap a mummy in a tiny hole with a giant ant that would continuously stun it. Some enemies are a bit of a bother though, like statues that are inspired by the Weeping Angels from Doctor Who and are a massive pain to deal with. 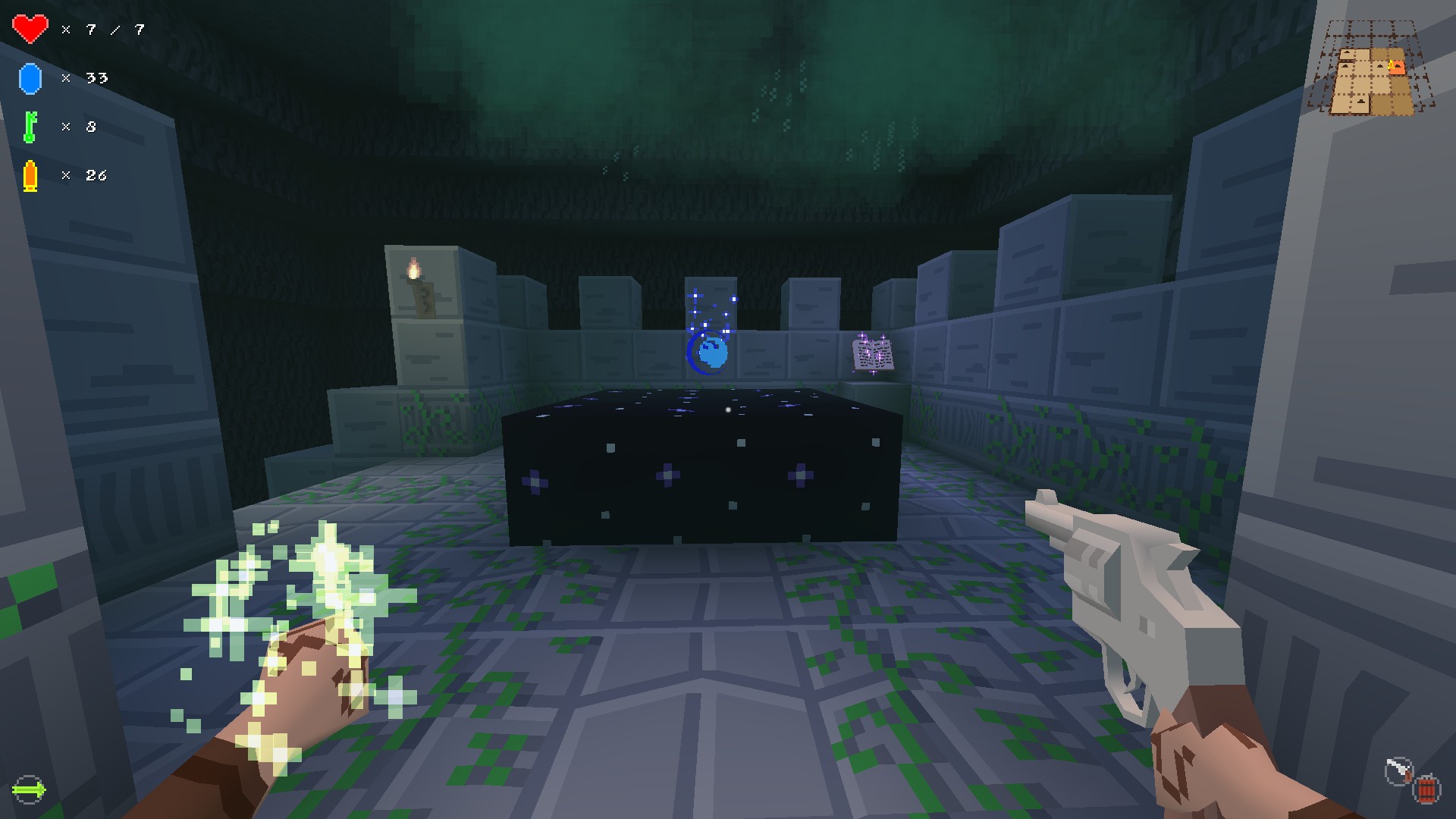 Another part of the game that becomes a bother over time is its roguelike structure. You start with little health and no tools, building up to become more durable, yet any enemy or trap that finally does you in will set you back to the beginning. You lose all the progress you have made, both in collecting upgrades and collecting the plot-relevant items, and have to start anew. In a game where death is swift and often hard to trace back to a source, I find this a tad too harsh, especially since the average session takes more time than I would consider ideal for a roguelike structure.

Even so, for a roguelike game Eldritch offers a remarkable amount of depth. The movement and platforming require skill and this is one of the few games where the promise of letting players decide their own play-style rings true. Picking your items and equipment wisely is important and you’ll really find yourself wagering the risk versus reward factor of looting enemies. It’s also just darn fun to play, so while dying comes with a harsh punishment, you are likely to immediately head back in to try again.

No, I am not playing Minecraft

Another popular influence that Eldritch borrows from is Minecraft, but here I feel the decision may have been a misstep. There are so many Minecraft clones out there that I could easily understand it if gamers thought it was just another clone or skipped out on this fantastic title because they are just sick and tired of it.

And it’s not even like the game looks particularly bad or uses the blocky, pixelated architecture wrong. Levels are created out of cubes and utilize a bright, cartoon art-style that is appealing to look at despite its simplicity. Each of the Gods’ worlds have their own ambience with the garden-like world of Cthulhu being particularly memorable. I also really enjoyed the classical look of the library, which really succeeds at looking like a mystical place filled with ancient, magical tomes, while at the same time being cozy enough to let you relax between their adventures.

Character and monster design achieves varying levels of success. Creatures like the Fishmen, the mummies I mentioned earlier, and some other monsters look fantastic and are a great adaptation of the Lovecraft entities that manage to look great while fitting in with the game’s own visual style. Others like the small Cthulhu-like creatures or the cultists look too goofy for my tastes, which conflicts with the otherwise threatening feeling of the game’s levels. Your own avatar also looks really lame because of the low quality of the model you can customize.

What the game does handle well is the sound-design. Even monsters with comedic designs manage to instill a sense of fear as you sneak through the labyrinthine hallways of Eldritch with the humming of nearby Cultists or the snoring of Cthulhu’s children around you. Oftentimes creatures make noises that sound like they spotted you, which never fails to put me on high alert. Those cultist may look like they were ripped straight out of Magicka, but the knowledge that they’ll tear me apart when they find me makes their creepy chanting still work.

When I started playing the game for indie month I was initially surprised and thought that the developers had done some re-balancing that severely messed up the game’s difficulty curve. Turns out I was playing on New Game+, which allows you to tackle the whole game again with more and tougher enemies after finishing it once. You do this by picking up the Soul of the Librarian in the Library, so if you just want to play the normal game, then be sure not to accidentally take the darn thing along. 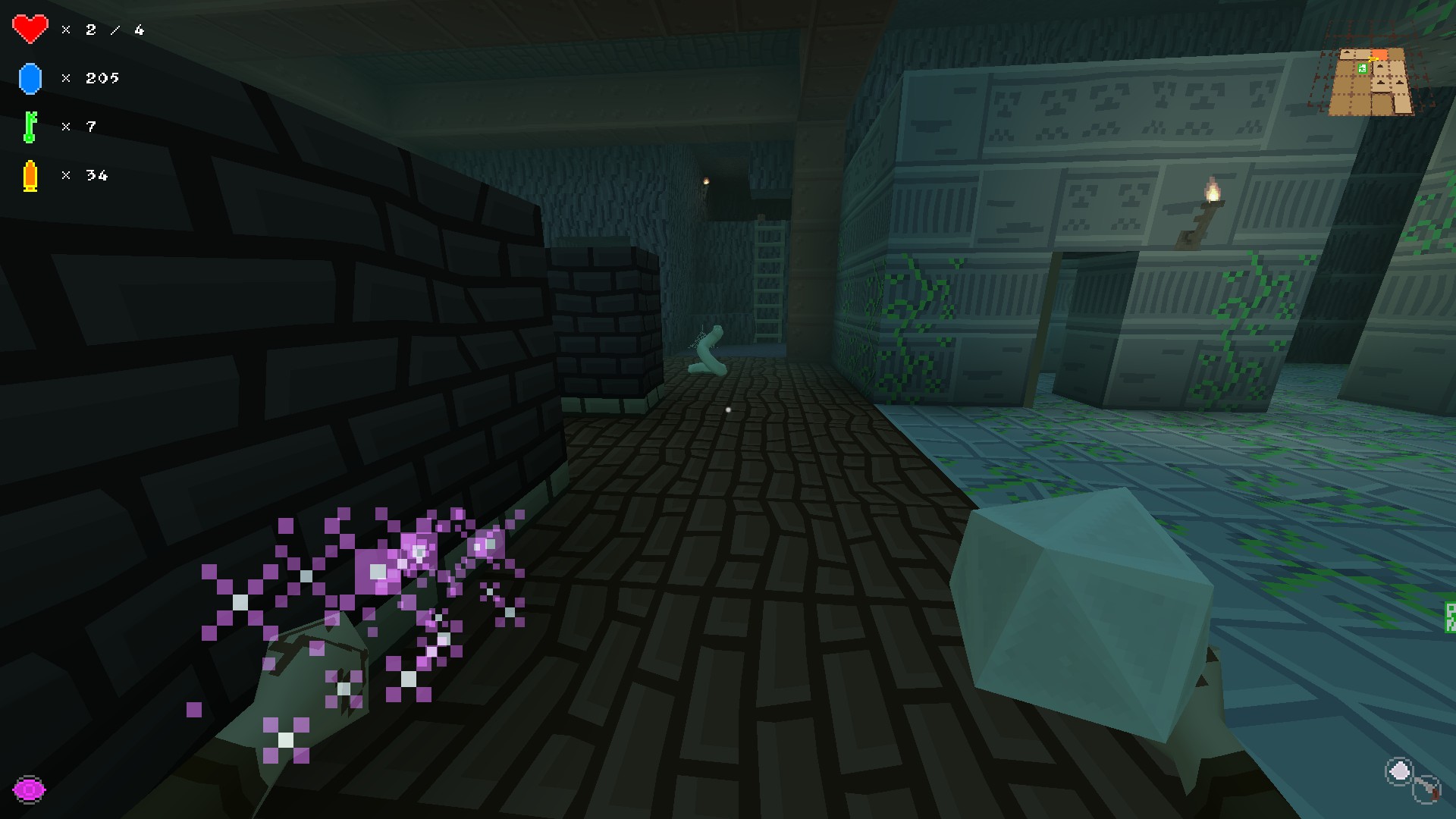 The developers also added two new stages disconnected from the main game, with one being inspired by The Mountains of Madness. These stages are a tad different from the normal levels, but about as long, so that is an extra 2/3rd of the game on top of the original product, free of charge.

Eldritch is the kind of indie game I’ll gladly recommend. While it’s visual style and character designs are ill-chosen, everything else about the game screams quality. If you like games that reward exploration and which promote finding clever ways around obstacles, then you can’t go wrong here. Every moment of Eldritch features informed choices, both big and small, that can and will affect the rest of your session, and it’s just a fun arcade-style action game to begin with.

One thought on “Eldritch”