3 years after Maxwell’s debut on the Nintendo DS and the often ignored sequel that followed, 5th Cell finally decided to leave the humble handheld behind and seek a broader audience. Scribblenauts Unlimited was scheduled to be a launch title for the Wii U and make an appearance on the 3DS and PC, as well as mobile devices. Except, I live in Europe, where the Wii U version, for seemingly no reason, was delayed for 13 months. By the time it finally hit shelves in late december for full price, Steam was selling it for under 10 bucks. PC Master Race, people.

For the first time in the series we get some insight in the deep and complex lore of Scribblenauts with an introduction cutscene that tells us about two, brave explorers who end up marrying and producing a few dozen kids, including Maxwell and his sister Lily. While all of those kids ended up leaving the house over time, Lily and Maxwell stayed around and became spoiled little brats. You see, Maxwell was given a notebook that would bring anything he wrote into it to life and Lily got a relic that could instantly teleport the two anywhere in the world. 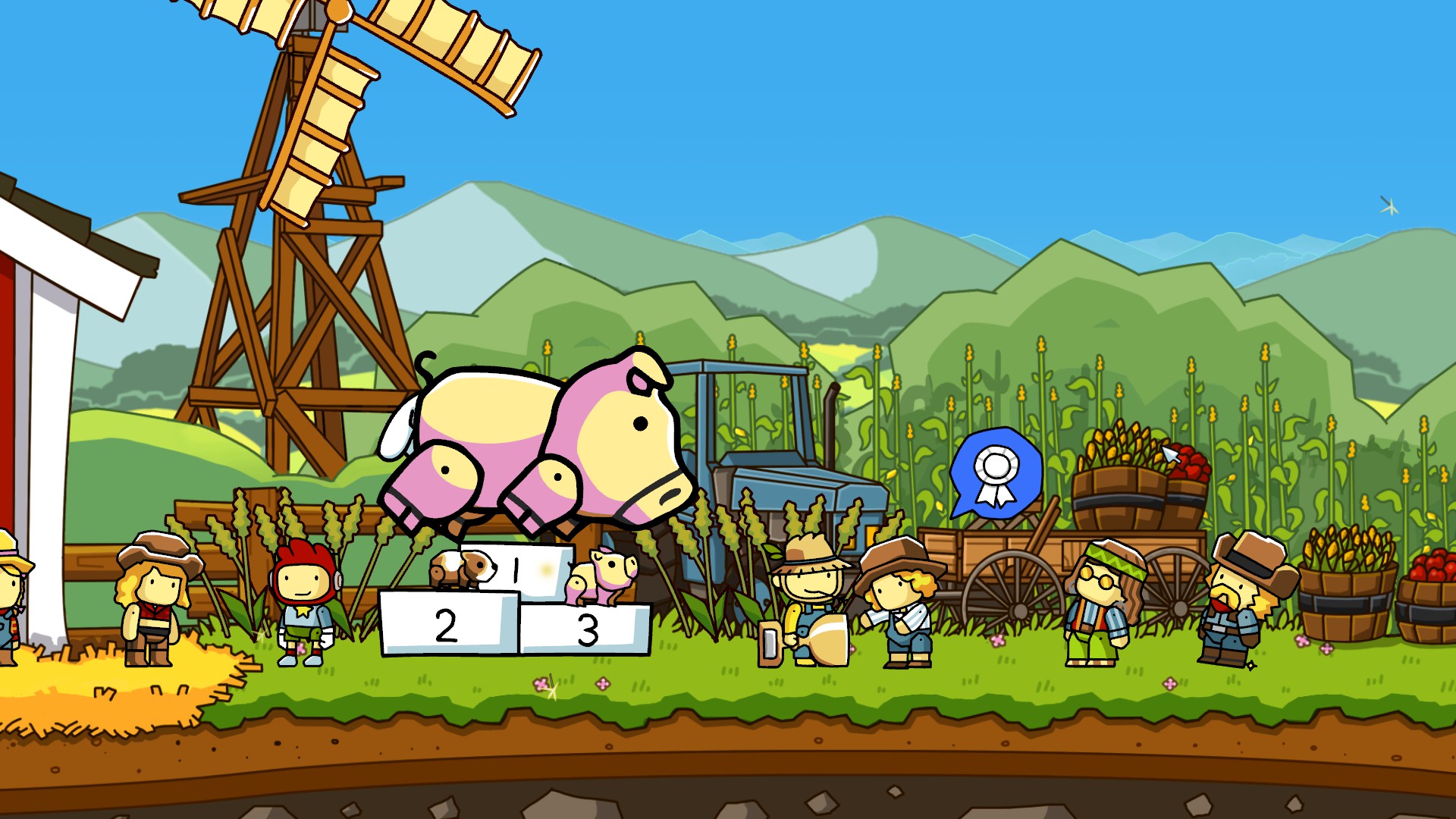 Concerned, their parents send the two out on an adventure to do good, which Maxwell immediately messes up by giving a hungry, old wizard a rotten apple. In return, the wizard curses Lily and she slowly but surely begins to turn to stone. A nearby brother then promises to take care of Lily while Maxwell travels the land to collect Starites, which are created when you make a person happy. With enough of those, Maxwell can undo the curse on Lily. Probably.

The whole story is presented in a fun way with an opening narrated by Lily herself, which sounds reminiscent to how you would read a bedtime story to your kid about the importance of doing good deeds and not poisoning random old men. It’s really sweet and kid-friendly, and even for older gamers it’s not too bad of an intro. Really, I am just amazed they bothered to actually make a story for this game and it really lends some context to the levels you are asked to tackle, with many being tied to some of Maxwell’s siblings. Yet, despite all of the effort, we still don’t know what a “scribblenaut” even is.

Like the Death Note, but the other way around

Unlimited certainly varies things up by completely changing the formula of the series. Rather than a mission select screen with a contrived theme, the world of Scribblenauts is now separated between actual zones. You select the one you want to go to and you can then wander around the level.

To progress you need to collect Starites and to do that you need to help out the many characters found in these levels. By clicking on the star in the upper-left corner your screen is filtered and characters that need help are highlighted in yellow. You can then click on them to see what their dilemma is and you can then open up your notebook and create what you think might solve it. Being able to actually type in what I want to make is such a relief and makes the whole game flow a lot better than it ever did on the DS.

The game is pretty good at interpreting what you want to make and by using adjectives you can create some really good and specific stuff. Generally speaking the puzzles are hardly complex, which makes it fun to experiment and see if you can solve it using the less-obvious solutions. On the other hand, the puzzles that reward you a full Starite (as opposed to a shard) are a tad harder and will typically put you in a mini instance where you complete a series of objectives. Fortunately, the game is pretty easygoing and the bar for unlocking new levels is low enough that even young players can keep progressing.

Since each zone is effectively a mini-sandbox, there is of course the potential for the player messing up the lives of the characters found within. After all, you can click and manipulate anything or anyone, so if you decide to spawn Lovecraftian horrors in the middle of a city center, they are likely to eat a few of the people you are supposed to help. This leads to the slightly questionable “reset” button that restores the default state of any zone. I appreciate this feature as a means to clean up the mess, but it also has a Majora’s Mask kind of effect where all your work is undone. I would have preferred it if the reset button cleaned up your trash and restored dead characters, but kept the people you helped the way you left them.

Unlimited is true to its name and really feels like everything that Scribblenauts should be. It has a ton of content with each zone being packed full of puzzles and jokes, it feels perfectly at home on the PC platform, and the puzzles are the best they have ever been. When the most I can complain about is that the reset button works too well, it should be obvious that the gameplay is just fine.

The presentation has received a facelift as well and looks really good at 1080p. Not only have we moved up to an HD resolution, but animations are also a lot less stiff and the sound is overall a lot better too. And when you consider just how tiny the screen of the original DS was and how relatively weak that machine is compared to the average computer, this is an upgrade that really shouldn’t be underestimated, Scribblenauts look gorgeous and not just in comparison to its previous titles. It’s a colorful and fun puzzle game, certain to appeal to children without deterring the older players, who will find a lot of clever comedy hidden within the game. 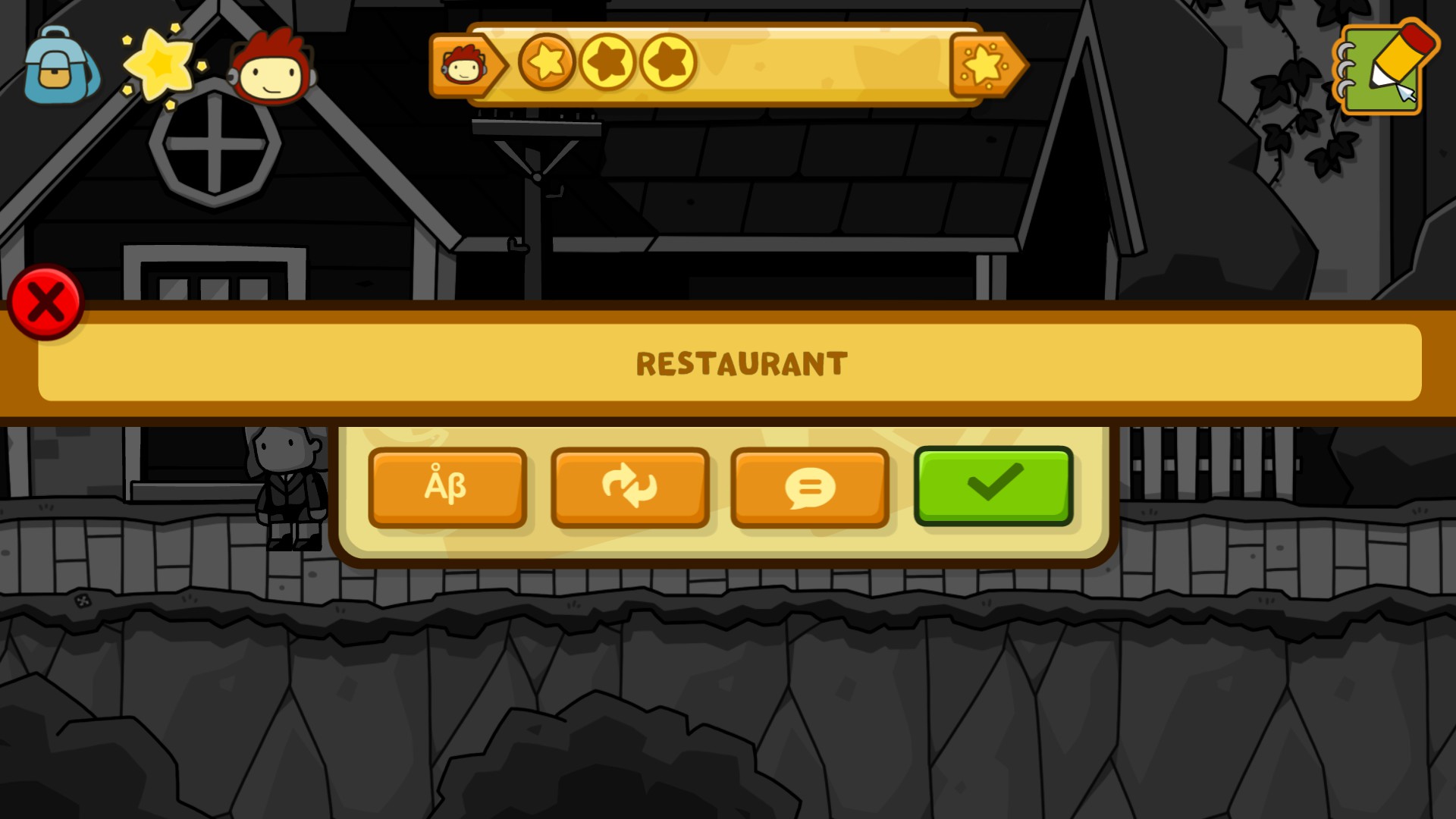 On a side-note, that opening cutscene I mentioned before is narrated by Lily, and Lily is voiced by Jennifer Hale of all people. For those who don’t know her, Jennifer Hale is a massively talented actress that has been active in countless games and tv shows. This is Commander Shepard, Ophelia from Brütal Legends, and Alice Twilight from No More Heroes we are talking about. As happy as I am whenever her voice comes around in a major role, she does sound a little too old to be portraying Lily and I think that might have worked better if she was an unrelated narrator instead.

For true linguists only

While you only need a portion of the game’s Starites to save Lily, there is only challenge and time preventing you from scoring 100%. While the average puzzle is not too hard to solve, there are a few that really stand out in terms of challenge, like the aptly named Gauntlet late in the game. Hidden in the game’s menu you’ll also find a massive list of riddles to solve, requiring you to spawn specific items and people to solve them. These tend to be a lot tougher to solve than the normal puzzles once you get the obvious few out of the way.

It took me a while, but I actually did get 100% completion. Sadly, there is no reward for doing such and I have since overwritten the save file for it too.

While the original two Scribblenauts games were fun in their own way, if you are going to play them you might as well just go straight for Unlimited. It’s by far the best game in the series and being able to play it on a PC really improves the games, both visually and mechanically. If the idea behind the game sound at all appealing, then try it out because it utterly and completely delivers on its premise.