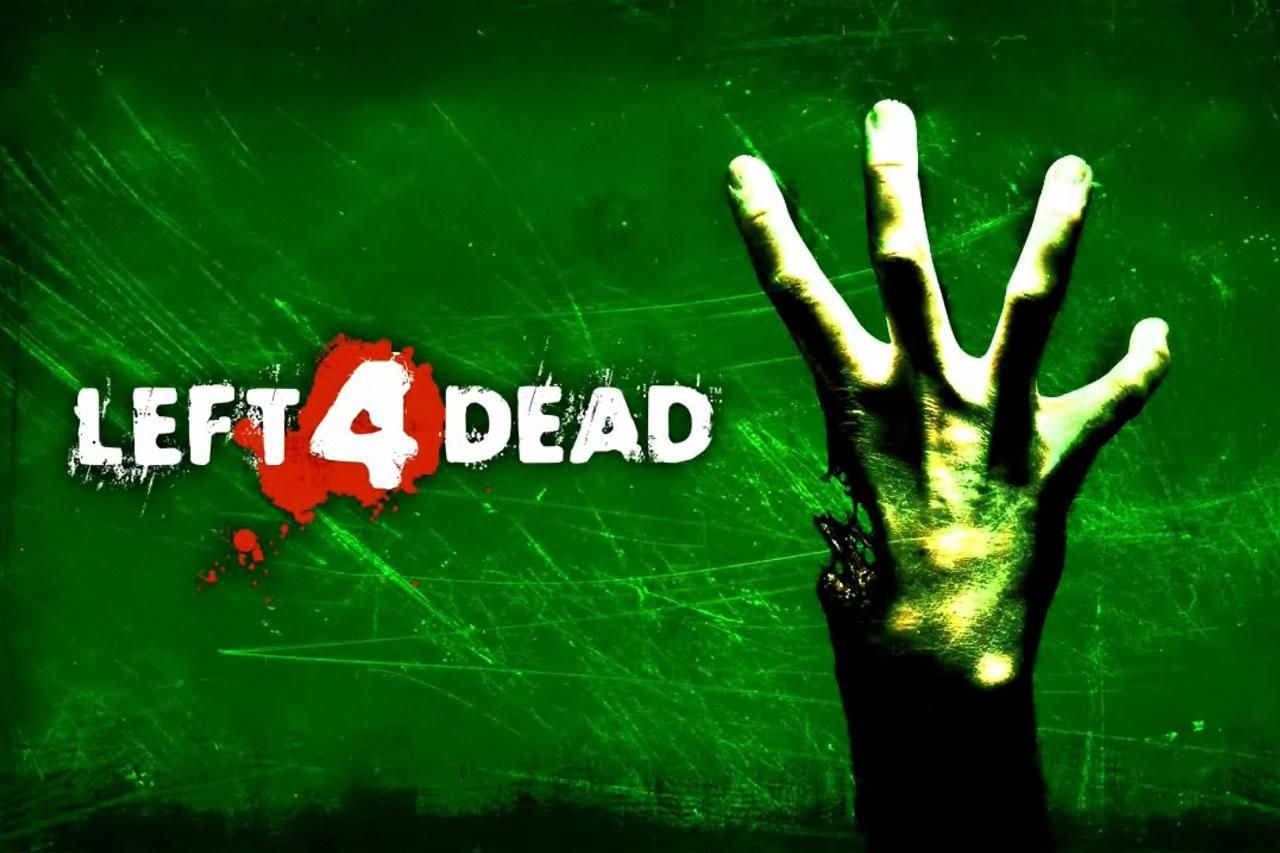 Now this takes me back… Left 4 Dead was one of the first games I ever bought on Steam all those years ago. I had just upgraded my old brick of a Packard Bell desktop and celebrated that with finally signing up for Steam. This game, and by extension its sequel, were two of my favorite titles for a few years. I figured it was worth revisiting the franchise for exactly that reason: to see whether teenage Casper had good taste in games or if he was just making do with the few games he had.

Dead, but not defeated

This is a zombie game and as such the plot is pretty simple. Some mysterious flu came around and those susceptible to it fell ill, turning into zombies over time. The game follows four people who are immune to the flu, but not to being eaten alive.

These four survivors are a rowdy and diverse bunch. Francis is an outlaw, biker guy clad completely in tattoos and giving off an imposing vibe. He hates almost anything, except for killing zombies. Louis is an optimistic fellow that worked at an IT company before the outbreak and frequently clashes with Francis’ more cynical outlook on life. Bill is an old, grizzled war veteran with a bad leg and, to contrast this, Zoey is a young university student with a love for horror movies.

While the characters look cool and sound like fun people to pick from when tackling the zombie apocalypse, I can’t really say that the game does a good job at endearing them. The game utilizes a system where dialogue is selected from a large pool of options depending on several criteria, like which zombies were encountered and in what condition the group is, which certainly prevents repetition in a game based so heavily on replayability. The problem, however, is that most of the dialogue I got was just informative, like characters hinting at where to go or that a specific zombie must be nearby. I actually had to look at the wikia to find out what little I know about these people because the game never triggered any of the organic discussions between characters that the developer commentary claims are possible.

Your experience may vary of course and I did get a few lines where characters made a joke or responded in a way that says something about how they feel about each other. Those were the good moments. In short: a simple setup with few surprises and characterization is a bit muddy. On the upside, though, you do get a lot of environmental storytelling, which I will get to in a bit.

Each campaign is split between several chapters and the goal of each of these is to make it to the next safe room and lock the door when everybody is inside. This is a first person shooter for up to four players, so at the start of a stage players pick from a machine gun or shotgun to supplement their pistol, with upgrades and extra items like pipe bombs and molotovs hidden around the stage. Weapon selection isn’t exactly diverse and the shotguns I find a tad unwieldy, but that is a minor issue. The shooting itself works well and is made satisfying thanks to the large amount of zombies and the gore & dismemberment you cause. 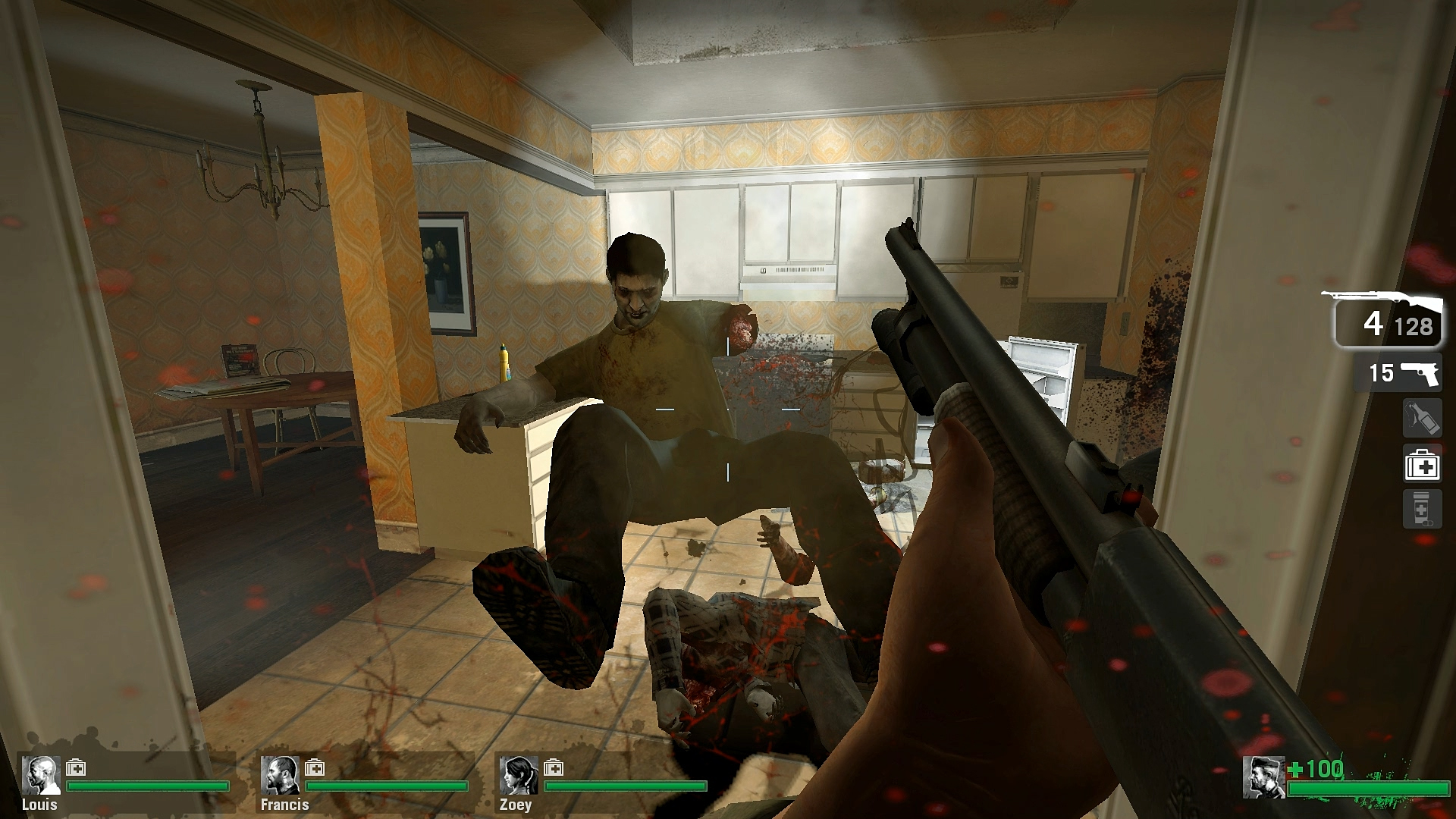 The route through each stage is fairly linear, but there is plenty of opportunity to explore thanks to the many side-rooms and alternate paths. When a survivor dies they will also respawn locked in one of these side-rooms, allowing you to recover from earlier mistakes at the cost of making a detour. Now, just fighting mindless zombies would be boring, so Valve implemented two solutions. Firstly, the famed AI director monitors the players to see how well they fare and adapts the difficulty to this. This means that hordes of enemies may swarm you when you are being overly careful or going too fast, or that you’ll find some extra first aid kits when the game gave you a tough time earlier.

The second solution are the special zombies that are mixed in with the hordes. The Hunter can leap great distances and pin survivors to the ground while clawing at them, the smoker’s tongue is incredibly long and drags survivors away, and the boomer’s vomit blinds survivors and lures the horde towards them. There is also the tank, a hulking creature that can take a lot of punishment and throw survivors around, as well as the witch who is passive until agitated, whereupon she will chase down the survivor that annoyed her and deplete their health in seconds. Fortunately those two are a tad more rare.

These solutions on top of a solid FPS experience make the gameplay something you can keep coming back to despite a lack of variety. Blasting zombies is just plain fun and these “special infected” and AI director make sure you keep running into new challenges. Even after so many hours of play I still found myself in situations that caught me off-guard; a tank that hurls a forklift straight through my team, a smoker pulling me off my turret right as the horde descends on a position we are defending, a witch in a stairway with no way around her. Even on normal or easy difficulty the game can generate such scenarios and throw your well-organized band of survivors into disarray. 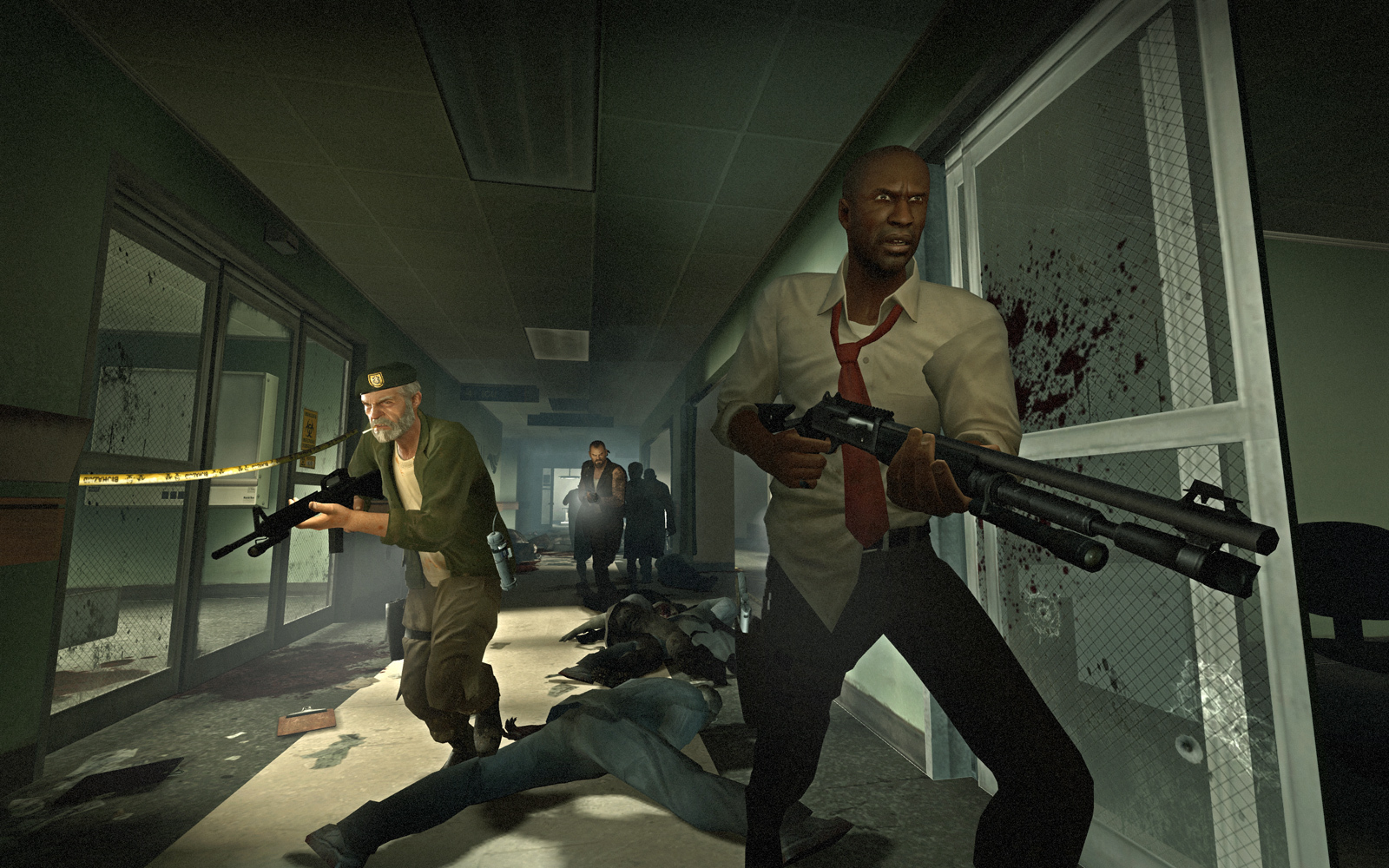 Also fun is how the game uses familiar elements from horror movies in the gameplay. You can close doors to stall attacking zombies, but they’ll claw through the woodwork and break it down in time. You can, however, shoot through the holes they create to keep them at bay. Abandoned cars will sound their alarm when you touch or shoot them, sending a massive horde your way, and each campaign ends on a desperate survival round where you must fight off waves of foes with what little resources you have. There are a lot of recognizable moments for fans of horror, including, of course, the obligatory creepy hospital as the game’s first campaign.

All in all I continue to find Left 4 Dead an absorbing game filled with some small issues. Perhaps the most prominent of those are the bot players; I lost count of how often they would run after me when a smoker drags me away instead of just shooting it, or prioritized shooting random zombies instead of concentrating fire on the tank barreling in our direction. Another niggle are the pipe bombs that usually seems to lure more zombies than it kills and the ridiculous spread of the shotgun. Not a deal-breaker when the core gameplay is this solid.

The atmosphere in Left 4 Dead is dense. It portrays a world torn apart by the zombie apocalypse in a way that doesn’t necessarily surprise, but certainly attempts to perfect it. You’ll fight your way through streets filled with abandoned cars and lined by burning buildings, shady alleyways with graffiti and trash, and no matter where you go, the zombies follow suit. And Valve really nailed the zombies here. There are hundreds of the buggers, yet they feel so diverse thanks to their somewhat-randomized designs. While there are rare moments where you spot two clones between the horde, those are the exceptions rather than the norm. The zombies are also a bit comedic, as you can see them doing all sorts of weird stuff before they decide to attack you. Sometimes they are fighting among each others, some of are just kind of lying around, I have found a few headbutting the walls. It’s fun to see that they are not just static video game enemies.

Graphically the game looks surprisingly good for 2008. I mean, wow, 9 years certainly did more of a number on me than it did to Left 4 Dead. Character models look cool, the animation is mo-capped, and the environments look neat and varied. Perhaps the only issue with the presentation is the sound-design. Sound is important to Left 4 Dead since the special infected make distinct noises to alert you to their presence, but I found that the sound effects were a bit too loud. Especially the guns often overpowered the dialogue or atmospheric sounds and there is no option to set individual volumes. 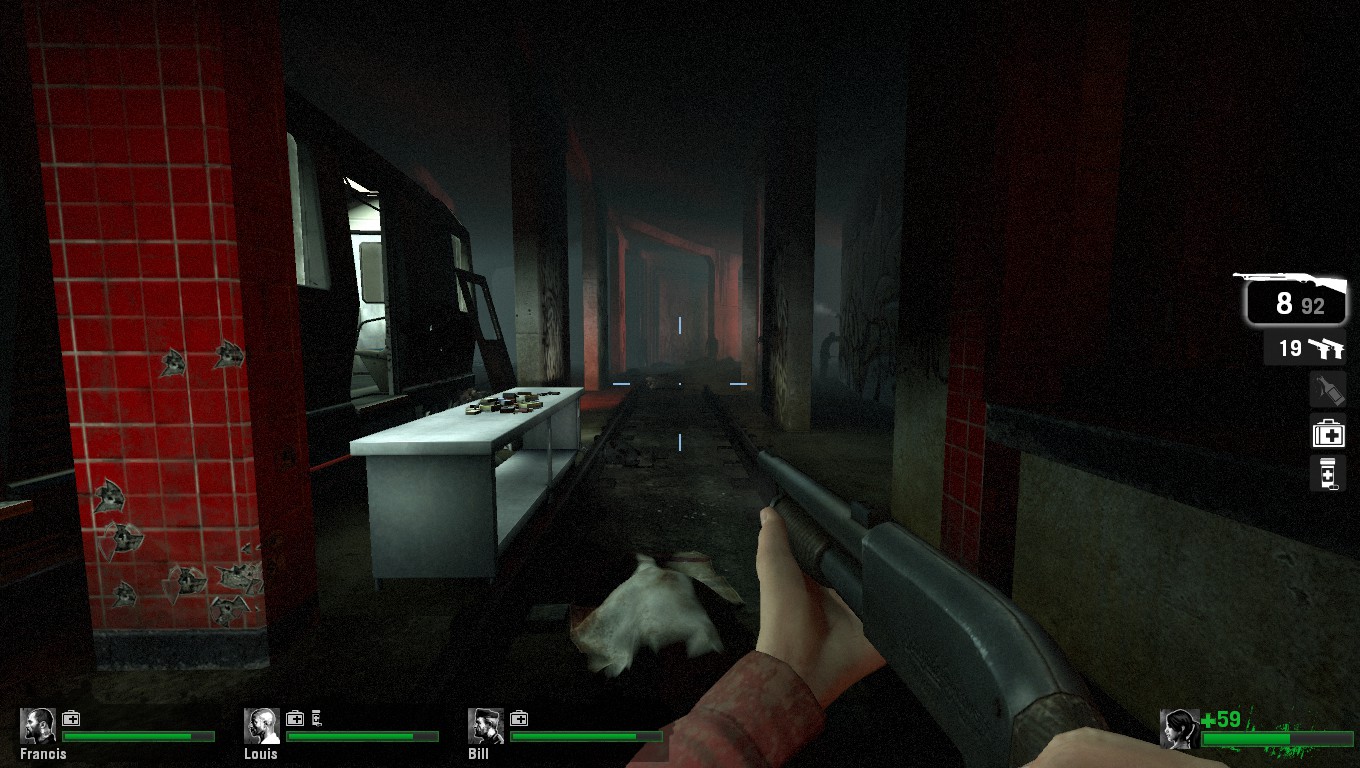 My favorite touch are the various stories left behind by other survivors on the walls of safe rooms and elsewhere. With the dialogue being what it is, these were the main source of storytelling throughout the game, along with subtle environmental details you can sometimes spot if you catch a breather between all the chaos. You’ll find messages to loved ones, conspiracy theories, warnings about places that are overrun. It’s a fun and creative detail.

Besides the regular campaign there are a number of multiplayer modes available. The first is a survival game where you must hold out for as long as possible, which is kind of impossible with the bots being what they are. I tried finding people to play this with, but the matchmaking system couldn’t find any active games, not a big surprise considering Left 4 Dead 2 is the more popular of the two games. 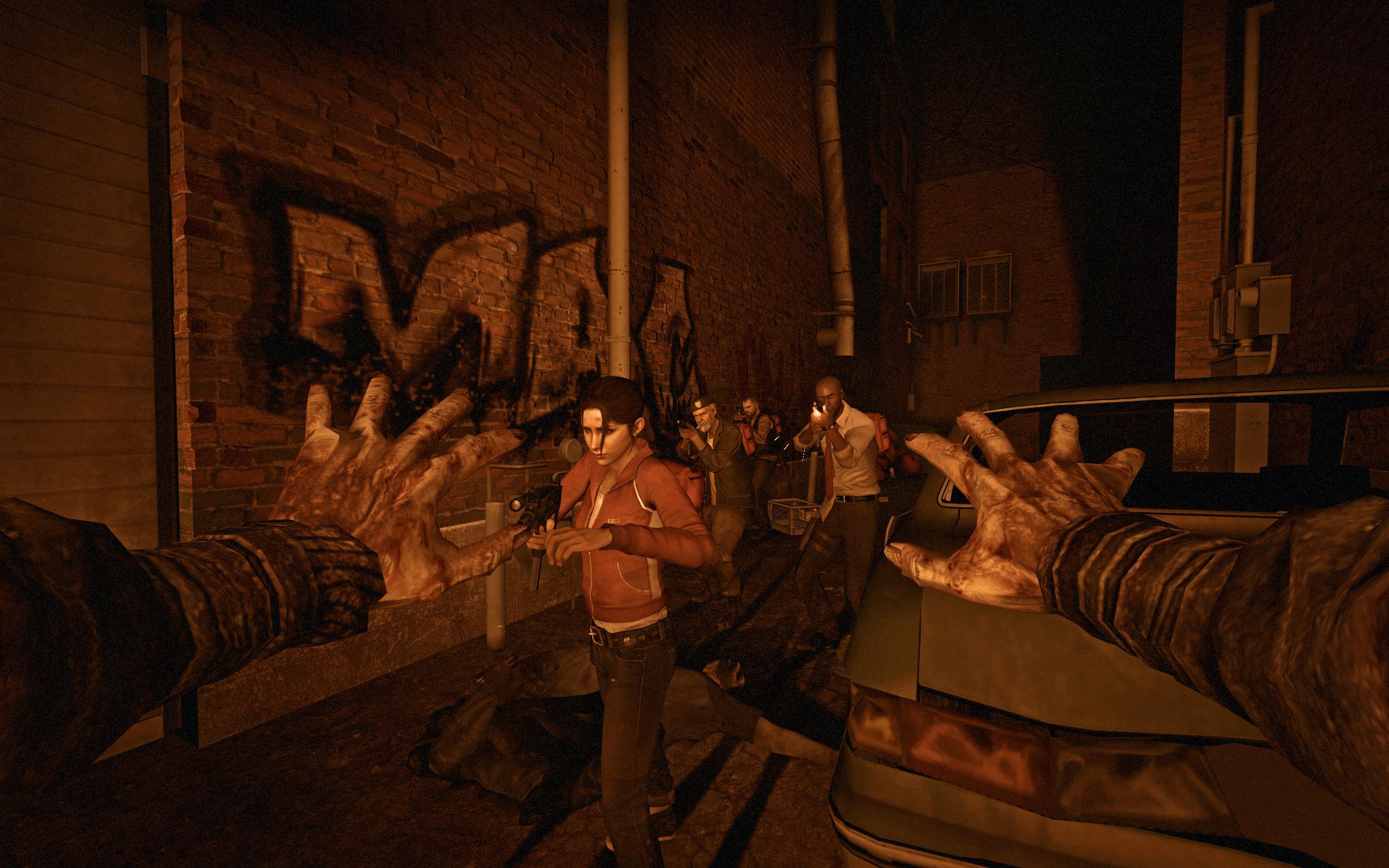 The second game is fun, but completely multiplayer-exclusive: versus mode has two teams take turns playing as either the special infected or survivors in a race to get as far as possible. The survivor team is graded on how far each member gets in the stage, so respawns are disabled and you may run into situations where camaraderie has to be abandoned in favor of running away from a doomed team to grab those extra few points. Sadly it’s not possible to play this exciting mode against just the bots, at least not without messing around in the development console.

If you can convince at least one person to play this with you then that solves a lot of issues. You can access versus and having at least one buddy to rely on in the campaigns already improves the experience that much more.

While this is certainly a fine game, I find it a bit hard to recommend. Left 4 Dead 2 contains all the campaigns offered in this game with upgraded gameplay to boot. With both games demanding the same price on Steam, the only reason to pick this one over its sequel is for the developer commentary and if you prefer the game without additions like melee weapons and extra special infected. Even so, Left 4 Dead will be remembered as an excellent title still played by a dedicated few, even if it was overshadowed by its younger brother.

One thought on “Left 4 Dead”