We still experience the aftermath of the 2011 Syrian Civil War to this day, with fighting in the area raging on as ISIS continues to hold their ground and the future of the region remains unclear. When asked to come up with meaningful games for this month’s indie marathon, few titles stood out as clearly as Endgame Syria, a strategy game putting you in the difficult shoes of a revolution leader. While it asks you to win the war, the game also reminds that what comes after is just as important.

As mentioned in the intro, the game puts you in charge of the revolution, both the diplomatic and military aspects of it. You must direct your troops and fight the oppressive regime to create a better future for your people. In this, I feel the game missed the opportunity to add in some details to foster an attachment to the country itself. Your character has no background or ties to the people you command, and an opportunity was missed to describe Syria in any meaningful way.

For example, a random event within the game has either the regime or rebels destroy monuments, which would have been an ideal opportunity to show us some pictures of those. Perhaps go the extra mile and show us a comparison between some of these sites before and after they were destroyed. I don’t think the game would have benefited from elaborate writing and developed characters, but more trivia and history on the country we are asked to fight for would have been nice.

The game features a handful of different endings that branch from two core choices. You either fight the regime until it collapses or accept a truce, both of which then show you slides detailing the outcomes. I am not sure how well this works, as I got pretty much the same results each time regardless of how I played. It feels more like the slides are randomly picked and those I got featured several typos. This was an idea that definitely deserved telling, but it’s clear it needed more polish than this.

Can I summon Exodia?

In this game you manage your influence, which is the resource with which you field troops, deal with problems, and cope with losses. A turn in Endgame Syria begins with a political phase where you get a hand of cards of which you can field two. Most of these cards involve courting with foreign powers, which gives an immediate boost of influence, or you use cards that up your attack or defense in the next military phase or unlock special equipment for that turn. 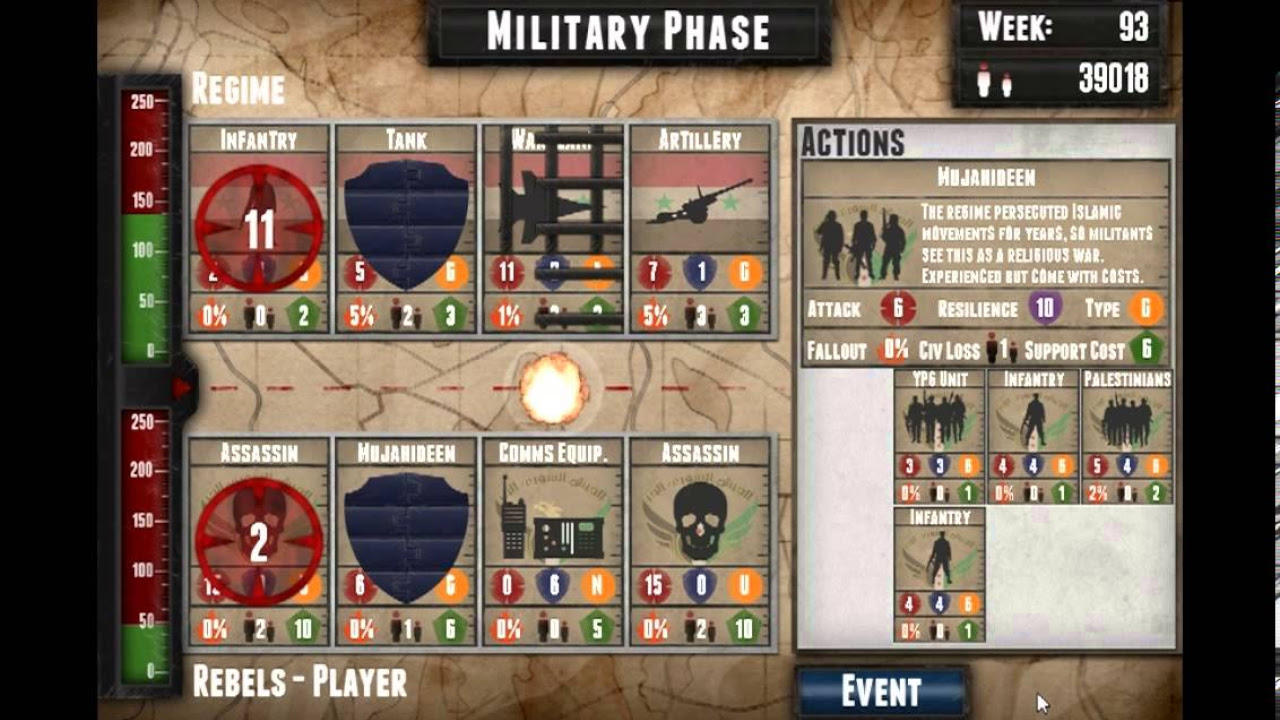 During the military phase you, again, get a random hand of cards representing troops and tactics, each with an attack and resilience statistic. You have four slots during this phase and the goal is to look at what the regime is fielding and putting a card in the opposite slot. The ideal match is a card that has enough attack power to overcome the enemy’s resilience, but which has enough resilience to survive the enemy attack. If the attack of a card is higher than the resilience of the opposite card, then it hurts the influence of the weaker card for a number equal to the difference. When neither card can overcome the other it results in a stalemate with no reduction in influence for either army.

There is a nice bit of unbalance at work here. The regime has less room to gain influence as foreign powers are unfavorable towards them, but they do have many cards in the political phase that improve the attack and resilience of their troops or decreases that of yours. During the military phase your ground troops tend to be slightly better, but the regime has access to strong artillery and aircraft that are almost sure to inflict some losses. In fact, you can’t hurt aircraft at all unless you gamble one of your political actions away to gain AA weapons for a turn, which are useless if no aircraft show up.

The system has the right amount of imbalance and randomness to make it fun and some rounds were certainly tense for me. I have once concluded a game with less than 10 influence left, it really was a race to see who would waste their last bit of influence first. I do feel the game is too much of a calculation, as there are multiple countries to gain influence from during the political phase, but it’s only sensible to always pick the ones that give the most. During the military phase too you always know exactly what the regime will field, so for the player it’s just a matter of calculating the best counters. Maybe it would have been nice if there was a chance some enemy troops would be obscured so you’d have to take a gamble on what to field against it.

While having more cards would certainly have helped the game, as it stands this a very enjoyable strategy game that is made very replayable due to the randomness involved in what cards you’ll get and the short length of any session.

In terms of presentation nothing in Endgame Syria is particularly exciting, and that is fine really. Gameplay is set to a static background and your play screen involves a section where you put the cards into and one representing your hand, which shows all the different cards you got and has a box that provides a description of them. The cards themselves have simple pictures on them and when you finalize your decisions some small animations play depending on the outcome.

For a purely strategic game meant to be played on phones it needn’t be any more fancy than that.

Games based on recent events are always kind of tricky and controversial, so much so that Apple refused Endgame Syria until it was rebranded to feature a more generic war and called Endgame Eurasia. But that GameTheNews could just do that to begin with is a compliment to the core of the game, you can just take it and put it in any other setting and it’ll still be just as strong of a strategy game. While the war in Syria continues to rage it remains a reminder of how dreadful the conflict is, but after it’s all over this will still be a game worth playing.