A few days ago we reviewed the police game This is the Police, so I figured it was only logical that the next title for this indie month should be about prison. After all, all those criminals I had Jack Boyd arrest need to go somewhere, so I decided to put on a tie and start managing a prison. To me, Prison Architect is like a trip back to the strange era of PC gaming where everything had a Tycoon game of its own. Fortunately, while the quality of the actual Prison Tycoon games left a lot to be desired, Introversion’s attempt at it went a lot better.

Their greatest crime is hurting my feelings

True to its name, Prison Architect has you construct a prison by directing the people who will be doing the actual legwork. It’s a management simulator where you hire staff, plan what you want them to do, manage the budget, et cetera. The goal, of course, is to make a prison and have prisoners inhabit it safely, meaning you need cells, canteens, and showers, as well as guards, solitary confinement cells, and huge walls to keep prisoners from murdering each other or escaping. 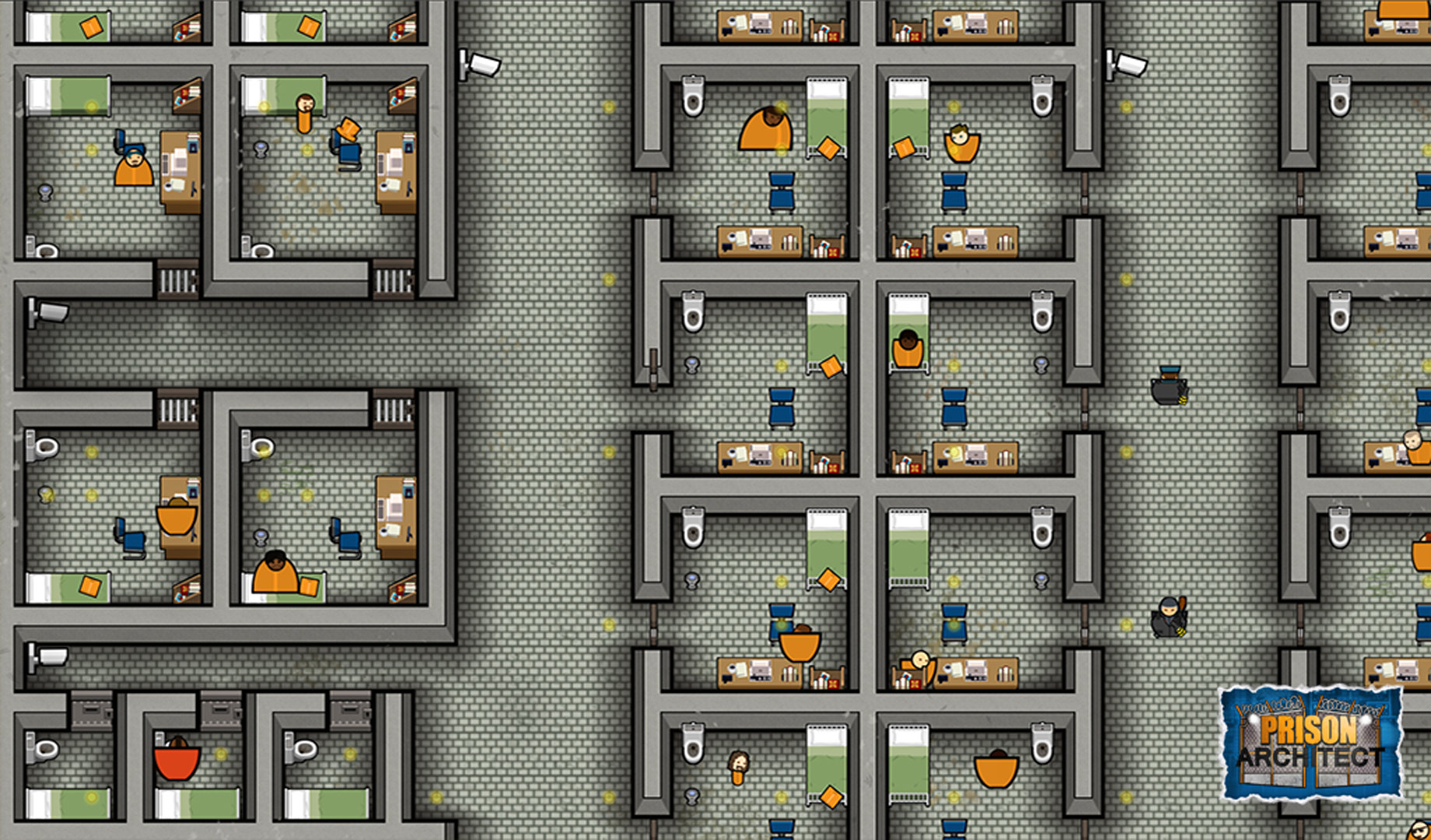 The tools to achieve this are honestly kind of remarkable, as I have yet to play a management game that is as accessible as this. You can select a foundation and just click and drag, after which your construction team will rush out to go and build everything that building needs, including all the lights and a basic floor. You can then select a room from the menu and drag it over the building you just made, which will dictate the purpose of the building and show you what kind of objects you’ll need to make it function. So designating a room as the kitchen will immediately instruct all your cooks to go there and display that you’ll need stoves, sinks, and freezers there. As an added convenience, those items will be highlighted when opening the items menu while the room is on-screen.

There are lot of different rooms with a lot of functions, so to guide you as you go the game offers a variety of grants from the main menu. You can accept these to get monetary compensation for building specific structures, which in the early game mostly guide you to setting up the essentials of a prison. You won’t always need a shop or library, but you’ll definitely need medical staff, offices, and some cells. Once prisoners move in you are compensated for the amount you have and the amount of days you went by without any major incidents, which balances out the growing costs of keeping staff and feeding everybody. Even then it may take some time to get the basics down and you may find the game dumping the first prisoners on your doorstep while you are still figuring the controls out. 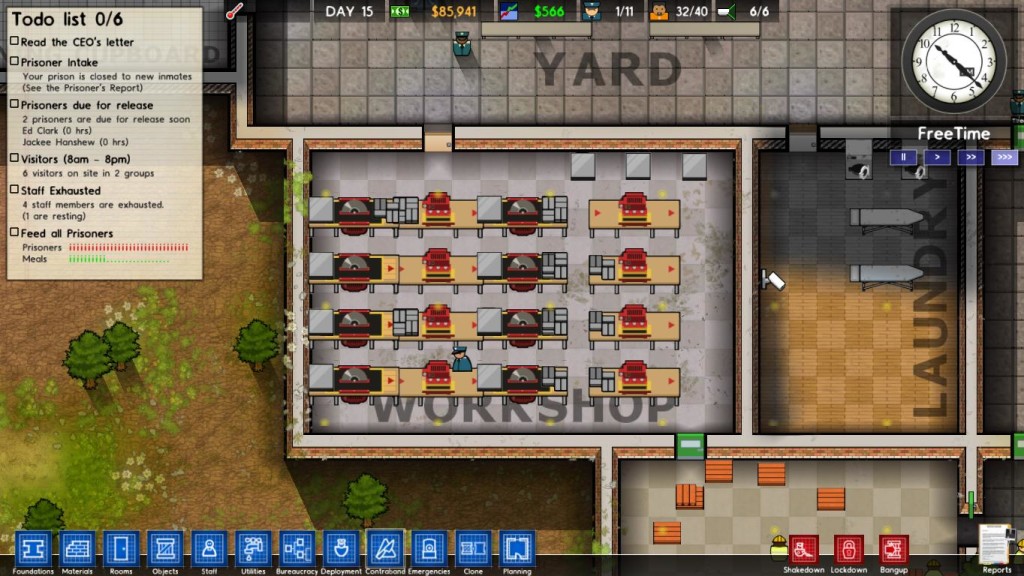 Once prisoners are in their cells and most of the basic necessities have been constructed the game has you mostly manage their daily routine. You can assign an activity to each hour of the day, which can be stuff like free time, shower time, lock-up, but you can also have prisoners work and study. Reform programs play a big role and decrease the chances of a prisoner falling back into a life of crime after their release. If you are so inclined, you can set them up with basic education, treat their addictions, tackle their inner demons… or you can run the prison like a tyrant and force them into hard labor. After all, having good food and holding these programs is out of your own pocket.

Prison Architect is really interesting because it allows you to run the prison in many different ways, each with benefits and downsides. I tend to run prisons that emphasize reform, which makes prisoners a lot more cooperative and calm, though it weighs heavily on the finances. If you feel prisons should emphasize the punishment, then that can be done too. You can schedule a lot of lockup time, serve bad food, and hire a lot of guards with the spare money, but this will make prisoners more violent and unpredictable. There are many middle grounds and directions to take it in, each with pros and cons.

I do have to say that the game is bad at tutorializing the more specific mechanics, despite making such a good start with the grants for the early game. I often had to hit up a wikia to figure out the use of special rooms that just don’t have any sort of explanation or other issues. For example, dog patrols only seem to work sometimes and do a horrible job of uncovering tunnels. I also ran into the issue that everybody was flunking reform programs because they had really low concentration, which isn’t explained at all in-game and most of the immediate suggestions on forums didn’t match my situation. What irked me the most is how much crime there was in my prison, even though I got it to run in such a way that most everybody was perfectly content. I had to build so many solitary confinement cells because people just kept getting caught with cellphones, weapons, and tools, even if they were doing well and were generally happy. WHY DO YOU ALL NOT LIKE BEING IN MY PRISON! WHY DO YOU KEEP STEALING PHONES, I HAVE PHONES FOR YOU TO USE LITERALLY EVERYWHERE.

A problem that follows soon after is that Prison Architect is quick to run out of content. Using offices you can hire management staff that unlocks extra options across a tech tree of sorts, but I found this quick to max out and required little to no attention. Once you get your prison running the way you want it, there is very little you actually need to concern yourself with, except maybe adding some extra buildings as needs change. Yes, you can buy land expansions and grow your prison even further, but that just felt like a hassle to me after I got everything working with the space I had. Working to reduce the chance that your inhabitants will reoffend is fun, but many prisoners will either stay for just a few days before their parole kicks in or have several years to their sentence, so either way there is no pay off to your hard work at all.

Interactivity just kind of drains away after a while and there was little in place to change that. Sure, sometimes there were tunnels to fix up or a fight, but with some guards in place that got fixed real fast. You can have random events, but these had a tendency to glitch out on me, so I had to turn them off. It’s a fun game when you are trying to figure it out, yet offers nothing new once you do.

This game enjoys a very distinct visual style, or at least it did until Rimworld came around and looked confusingly similar. The characters are all simplistic cartoon dudes and the prisoners have a wide variety of visual details like haircuts, body shapes, and accessories to give them variety. If you keep your prison small, you’ll find yourself recognizing some of the prisoners after a while, which I find a nice touch. You’ll remember the quirky looks of a renowned troublemaker or the unassuming looks of the first guy to actually pass your basic education program. The rest of the sprite work is also good, but just not very noticeable because it’s mostly common objects like desks and prison doors. I will say it’s a bit of a shame that there aren’t much decorative options. I found myself constantly re-using the same few floors over and over again, and most of the objects you can place are just functional. Likewise the sound design is nothing to write home about, mostly ambient noises and sound-effects. If you are going to play this for a while then I recommend putting on a podcast or something.

I will say that this a bloody game, which I feel is a weird choice. Management games are typically an E-for-Everyone thing and I could certainly see the gameplay of Prison Architect appealing to a younger player, but when riots break out this game gets rather messy. That’s not even mentioning the story mode and collectible pictures, which often show violence in a more realistic style than presented with the in-game visuals.

Designing your own prison is at the heart of this game and clearly had the most work put into it, but at the same time there is a story mode available. This mode functions partly as a tutorial and has you build specific buildings or perform actions in pre-built prisons as objectives that drive the story forward. While it would be a nice extra, I really didn’t enjoy it for several reasons. First and foremost, each chapter takes a really long time and is prone to bugging out in ways that prevent you from completing the scenario to unlock the next one. While it’s fine to have a longer story mode, it feels like you are putting a whole lot of effort into temporary prisons, as nothing you design carries over to the next mission.

Secondly, the story mode is really violent, vulgar, and all-around kind of cynical, which again makes it hard to appreciate, especially since the game itself is so much like a cartoon. A lighter tone would have suited the story better, though even then I wouldn’t have played it for long since it’s so buggy and doesn’t work well as a tutorial.

Another extra you can work towards if you like are the polaroids that appear in your prison when certain set-pieces happen. For example, I got one showing prisoners playing billiards when a few of them gathered around a table. It’s nothing special, but fun to find when you stumble across them.

I had a lot of hope for Prison Architect when I first bought it as an early access project, and did enjoy it while it was being actively developed on. It was disheartening though, when the game finally got a full release and I struggled to find what all those months of development had gone into. Gameplay-wise the game hadn’t expanded much at all and was still low on content and poorly tutorialized. Come on, there are entire rooms that have no tooltip or in-game explanation to them. Has it gone into the story mode? The fancy polaroids? I sure hope not.

Prison Architect is a better Tycoon game than most and probably the best option for you if you specifically want to run a prison. It’s just a shame that the initial excitement soon makes place for confusion and boredom, as mechanics are poorly explained and content runs out respectively.