At the beginning of this site and even before I was a part of this wonderful journey, I remember a specific review I was very surprised by. Casper is one reviewer I respect wholeheartedly, as no matter if I agree with him or not, he always brings up valid arguments in a way that shows understanding for other people’s point of view, while still providing in-depth and thorough arguments of his own. But I was quite shocked when I saw one game I did not like, was so highly praised by him. Actually, it was generally highly praised and it caught me off guard. To be honest: Brothers: A Tale of Two Sons came when interactivity was at a low-point and a more story- or atmospheric focus was at the forefront in videogames. When I saw his review, I decided I should one day give it another look and see if my opinion has changed.

As you start the game, you see a kid kneeling before a grave, grieving over the loss of his mother. Having lost her at sea, unable to save her, his luck is not turning around as his father has become sick and severely so. After helping his brother take their father to the local doctor, they are tasked with finding a tree with some form of holy water, which is known to cure all ailments. What I love about this story, is the grand adventure these two characters are taken on. They have a long way to travel, through cold mountains with giants who apparently died in a battle, cursed forests with lurking creatures, and trolls inside a mine, which is reminiscent of dwarven architects. It really feels like an old fairytale from before dark fantasy and I was on the edge of my seat for every event. However, this is also a weak point to the story as none of these events are in any way connected to the overall plot and just feel added for making a magical world, but not for storytelling. 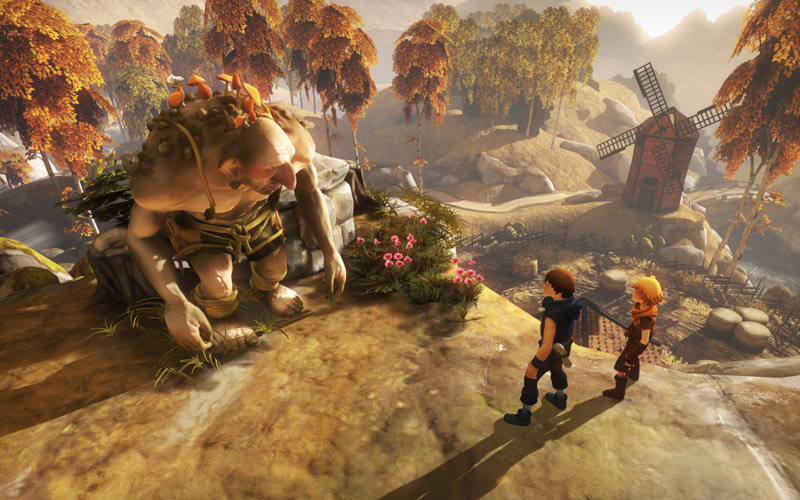 The characters are lovable and feel genuine, such as the troll seeking his loved one or the brothers themselves, with the older one being more responsible and hardworking, while the younger one is more artistic and playful. I also love how this is shown through both optional and mandatory conversations as this is a very effective way of making the brothers have clear personalities, despite the only words they utter being names and gibberish (or simlish if you will). Unfortunately, while their interactions with the world around them are lovely and detailed, their interactions with each other are limited and rare. It would have been nice to see them fight more, that they have have something that makes them close or at least have more emotions towards each other, as what they have is limited. I can only recall a couple of times they showed love for each other, and these were short, except for two parts: the ending and an odd dream-sequence.

Speaking of which, the same can be said for when they try to have flashbacks or dreams symbolizing their relationship with their parents and previous events: they are rare and limited. The little brother blames himself for the death of his mother, but that is already apparent and seeing the older boy going fishing with his father seemed very sudden and randomly added. Why not showcase what made him responsible instead of revealing that they both like fishing? These are faults that often took me out of the story, and some parts became unnatural, such as the village bully in the beginning that doesn’t want you to go save your father’s life. That is saying something when it is easier to accept the fairytale creatures than one humanoid character. Still, you are getting a magical adventure, so if you are okay with that and don’t need anything more, you will be pleased. It also ends on a bittersweet note that really got to me, despite the rest of the story being average at best.

Stick to the brothers

In this linear, story-driven game, you control both brothers at the same time using both analog-sticks to move each of them around and shoulder-buttons for interacting. If this sounds uncomfortable, it is, and something I never got quite used to, as it was always hard to remember which analog-stick controlled which brother. It is a unique and intriguing take on cooperative gaming, but it can be similar to rubbing your belly and patting your head at the same time. The concept of this dual-controlling starts out well, with a good tutorial. Here you use both characters to push and pull the wagon their father is in, and it showcases some strengths and weaknesses they have, such as the big brother being stronger and can pull harder switches, while the younger one can go through fences because he is smaller. They also help each other to progress as shown when they carry their father to the doctor for example, which is very clever. It shows how this could be used for some clever puzzles or to create a strong connection between our protagonists by helping each other through combining their strengths. However, that is not the case.

The puzzles are often straightforward and almost automatic, making each encounter forgettable. Pushing away a giant’s arms, carrying constructions to destroy machines, or riding goats in the mountains sounds appealing, but are over way too quickly and can often be as simple as just holding the analog-stick in the right way. All interactions feel more like making this into an interactive movie, rather than a game, which is suitable, but with no puzzles being any kind of fun brain-teaser, I was set on autopilot throughout this entire adventure. There was one puzzle I enjoyed, where the brothers were at separate planes inside a cave and had to operate machines to help each other progress, but that was pretty much it. The fact that many concepts of progressing get repeated, such as lifting the other brother up to a cliff, makes me wonder if they had any clear plans for this.

I was originally not planning on adding much about the extra-content, but there are some optional conversations and tasks that can be done, but more for giving an achievement and not much more. They can be an interesting additions though and at no point was I halted in either the side- or main-objectives. While I felt the game was on auto-mode for the entire journey, there was always a flow and a sense of progression. Even the boss fights, despite being okay at best, made me approach them in different ways. But it really lacked any gameplay to make me engaged and challenged, or to add to the connections these two could have had. The ending had a fantastic example of this, but why only end with it and not add similar creativity sprinkled throughout the actual journey? It would have made an already strong ending even more devastating.

If there is one area I can completely agree with Casper about, it is the game’s presentation. This world is amazing and features landscapes that reminds me of the non-urban environment in Scandinavia. Green forests, icy lakes, dangerous mountains, and plenty more, all filled with creatures from fairy tales that are as classic as they are traditional. As one who has indulged in these old tales and is Norwegian, I can tell they put every effort into this and hold true to many familiar creatures down to their design. There are even benches placed in the areas to show this world in all its glory from a better view, and it is marvelous. Adding to this, are the mysterious and magical creatures, such as trolls mining in the background inside an enormous cave, townspeople going about their daily lives in an old village, and the cursed forest filled with eyes watching you and death lurking around every corner. There can be some off textures, but when everything is this magical, it is easy to overlook. Even the characters that represents normal humans have great artstyle and the animations everyone has make this world feel alive and real. 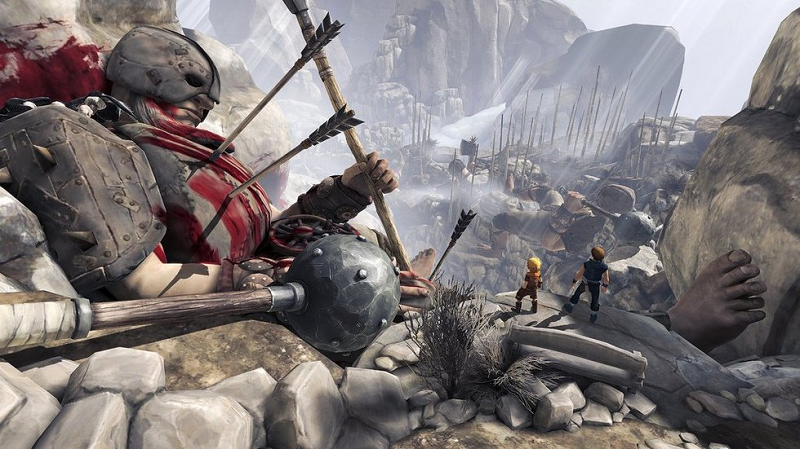 Next, is the beautiful soundtrack, filled with long stretches of instruments such as violins, drums, guitar and voices, with it all having an old Scandinavian tone as well. Fitting as the developers were Swedish, and it captures the traditional folk-songs to a tee and it all sounds beautiful, echoing into the void of this huge and dangerous world. Gustaf Grefberg did a fantastic job here. Voice acting consists mostly of gibberish as mentioned, and while not bad, is an odd choice that, to its credit, works for conveying mood without relying only on pantomiming. Asbjørnsen and Moe would have been proud.

I don’t think Brothers: A tale of Two Sons is a good game, but I do admire the adventure you are taken on, despite the story being nothing to write home about. I believe this is where it has its strength: this is better as an experience. The game is only 3 hours long, but it never overstays its welcome and is a marvel with creative creatures and a fun trip through a Scandinavian fairy tale. However, I would much rather recommend a lets-play of this, as playing it is not very exciting and having some witty commentary can help. I unfortunately object to this one Casper, but not for being a lackluster fairy tale.