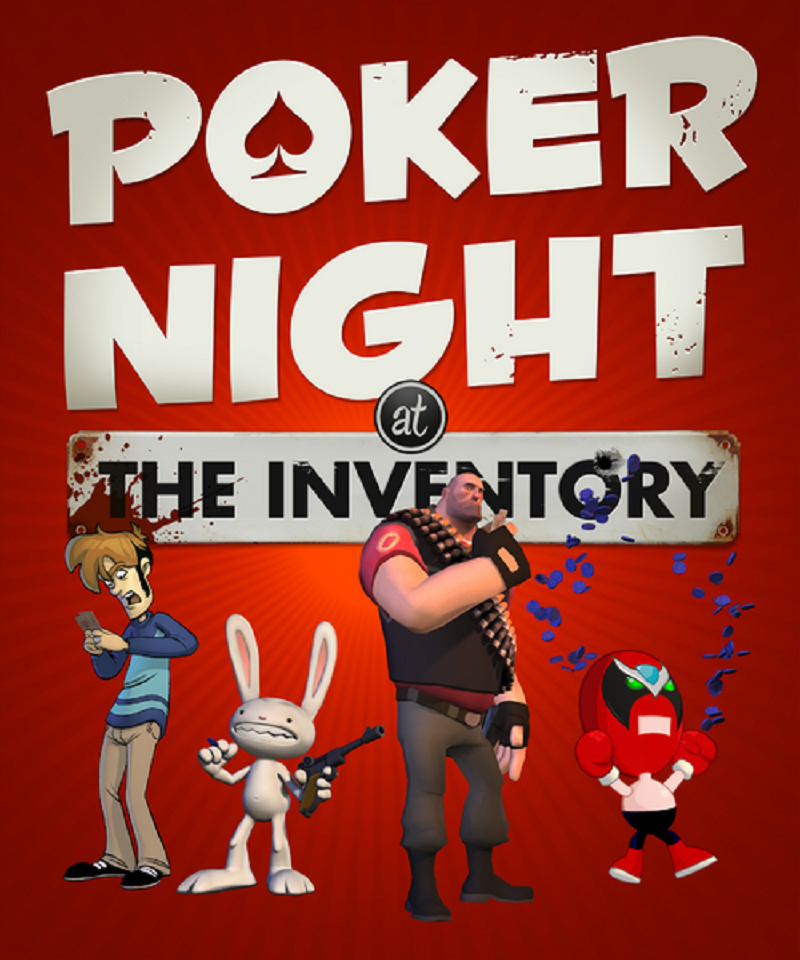 For a while now there have been murmurs at my office that people want to organize a few poker nights. So far nothing has come of it, but I was silently dreading the moment when somebody actually got the ball rolling. Not out of fear of social interaction or anything, but for the simple reason I didn’t actually know how to play poker at all. Fortunately, at some point in my life I ended up buying Poker Night at the Inventory because I used to be super into Penny Arcade, and then never played it because I didn’t know how to. It was time to buckle down, deal some cards, and learn how to play this weird game.

A writer, a rabbit, and a mercenary walk into a bar

Poker Night at the Inventory works on the rather insane premise that a bunch of characters from wildly different intellectual properties come together in this secret, underground bar to play cards together. You arrive there yourself and are led to the table by the bar’s owner, where you find yourself face-to-face with Max from Sam & Max, the Red Heavy from Team Fortress 2, Strong Bad from Homestar Runner, and Tycho from Penny Arcade. 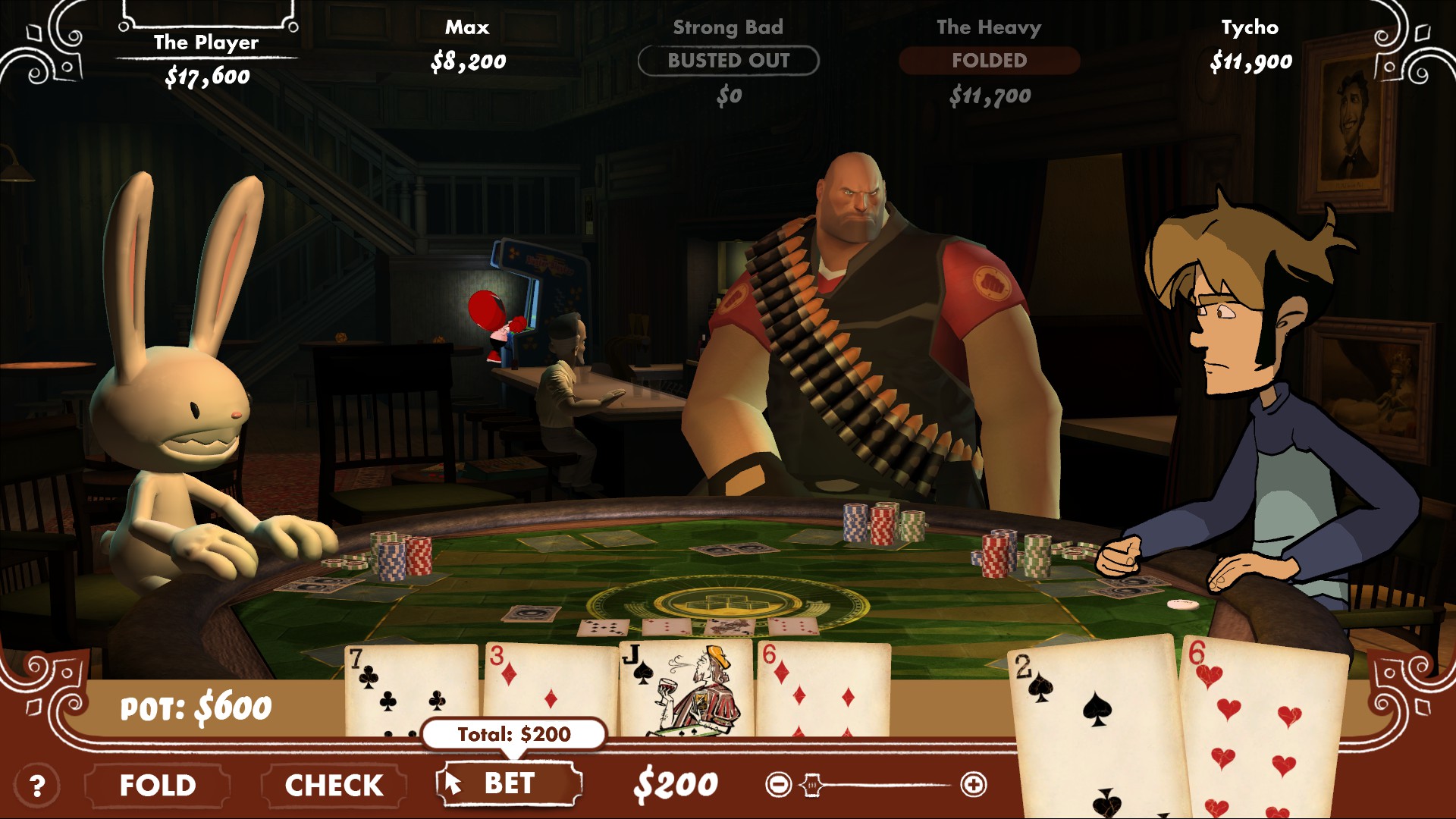 Each round has all five players weighing in 10,000 dollars and then play a game of poker. Fortunately for me, the game features a really nice tutorial that explains the game much better than any of the people that have attempted to teach me before. You can always check this tutorial again, but after just a few games I already had a good feel for the game. The different card combination and in what order they rank can also be found behind a single button-click, making it very accessible to check if you are working towards a good hand.

Besides that it’s just a game of poker that works. The computer deals the cards and then the bidding starts. There are buttons to either check, call, or fold immediately, and a slider you can manipulate to determine how much you raise. The slider could be a little more user-friendly, but that’s a minor problem. The AI is really fun to play against and does a good job at feeling as dynamic as human players. You can lead them on or coerce them into folding, and they will generally do the same thing to you. I have certainly had times where I was anxiously considering whether to call Strong Bad’s bluff or not, or where I was relieved when the AI folded after I raised a ton of money. 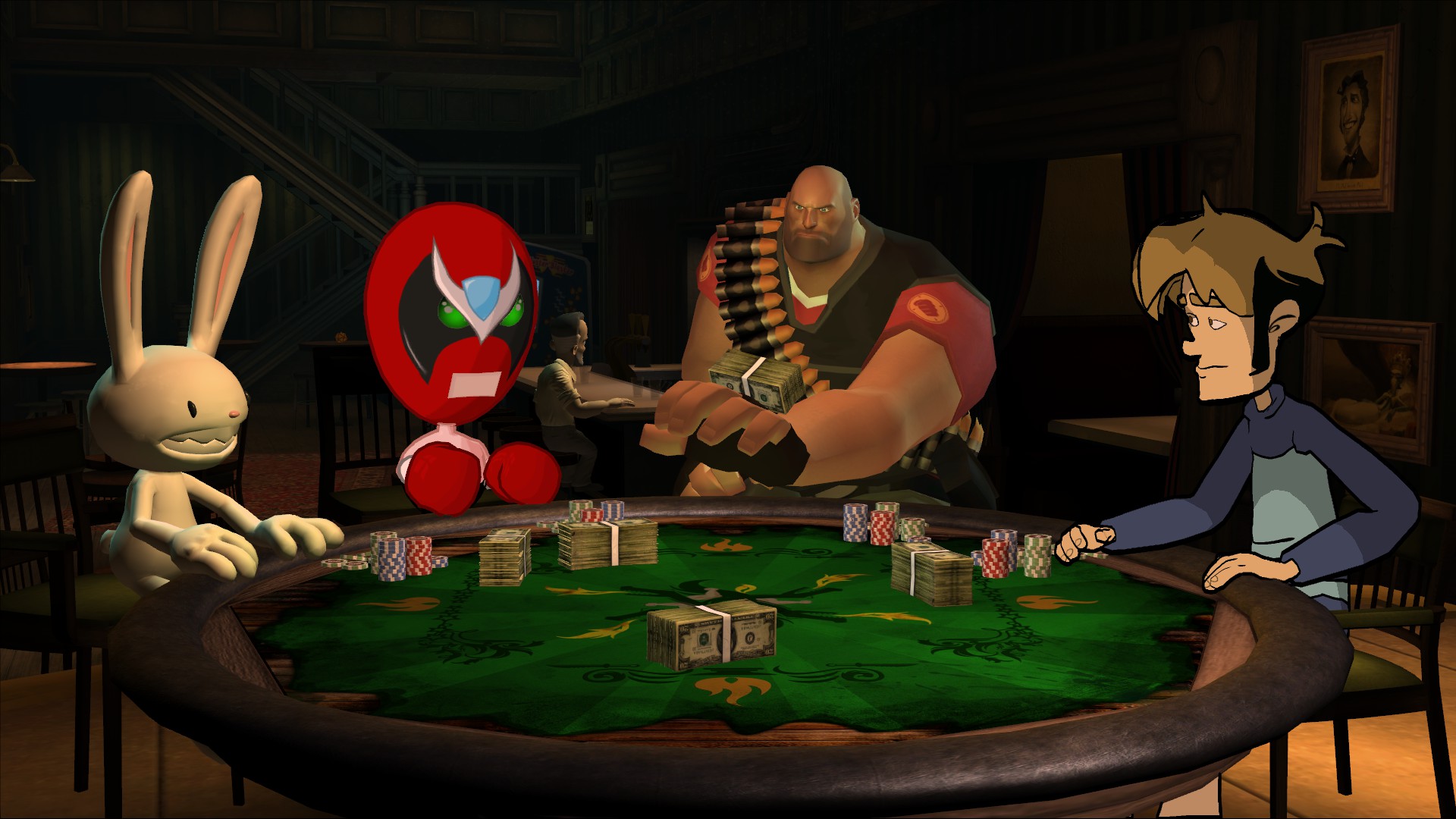 It’s difficult to tell, however, if the AI has unique personalities or if the recurring patterns I saw were just incidental. Tycho and the Heavy seemed to play very cautiously, often folding in the first round of bidding already. Especially the Heavy was really easy to intimidate, which you’d think wouldn’t be the case. Meanwhile Max and Strong Bad were really enthusiastic and eager to bluff. I often had those two either rake in a ton of money on the first round or even lose it all by going All In right away. The fun part is they aren’t just senselessly bluffing, they often actually did have some worthwhile cards to back up their reckless bidding.

Besides the excellent tutorial and good AI opponents, what makes this game really worthwhile is the amount of personality worked into it. Your four opponents are constantly talking about all sorts of topics and get into various discussions. Strong Bad will brag constantly about what an awesome guy he is while the Heavy tries to recruit him into the Red Team, Max talks about weird adventures he had and Tycho just behaves like a weird nerd. I love that he sometimes just rolls a D20 and then either bids or scowls at the die and folds, there is so much personality on display here. 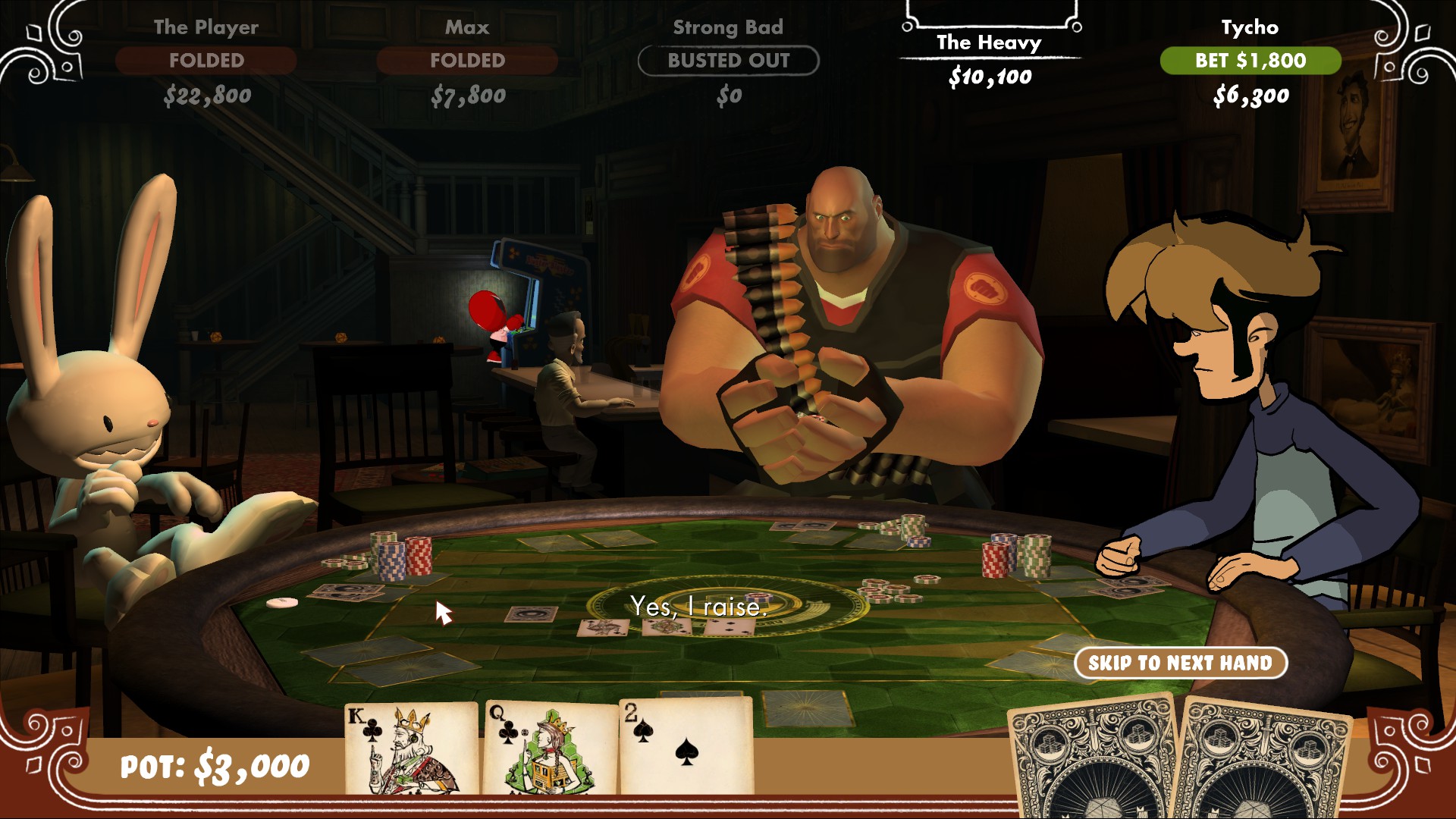 If you play the game a lot and set the frequency of conversations high you’ll run into repeated jokes a few times, but you can’t really fault the game for that, it can’t have an infinite pool of dialogue to work with, after all. Getting insight on what the Heavy is like and watching Tycho get into arguments with Strong Bad was really entertaining and more than you could hope to expect from other poker games.

Blinded by the blinds

There was no way a game like this wouldn’t look weird. Max, Tycho, the Heavy, and Strong Bad aren’t just from different IPs, they also utilize vastly different animation styles that clash with each other. Throw the bar on top of that, which itself occupies a different aesthetic realm, and you got a game where everything looks really out-of-place. If you are bothered by such things, then you probably shouldn’t be looking into this kind of game.

The voice acting is spot on, though. William Kasten reprises his role as Max, Gary Schwartz is here to play the Heavy, it’s really good stuff. I was kind of surprised to hear Tycho speak, since it’s a comic character I have followed for years, but apparently his voice is done by Telltale Games mainstay Andrew Chaikin, who also did Tannen for the Back to the Future point & click game. It’s a strange experience for me, but I do really enjoy his delivery and I find that it nicely fits the character. 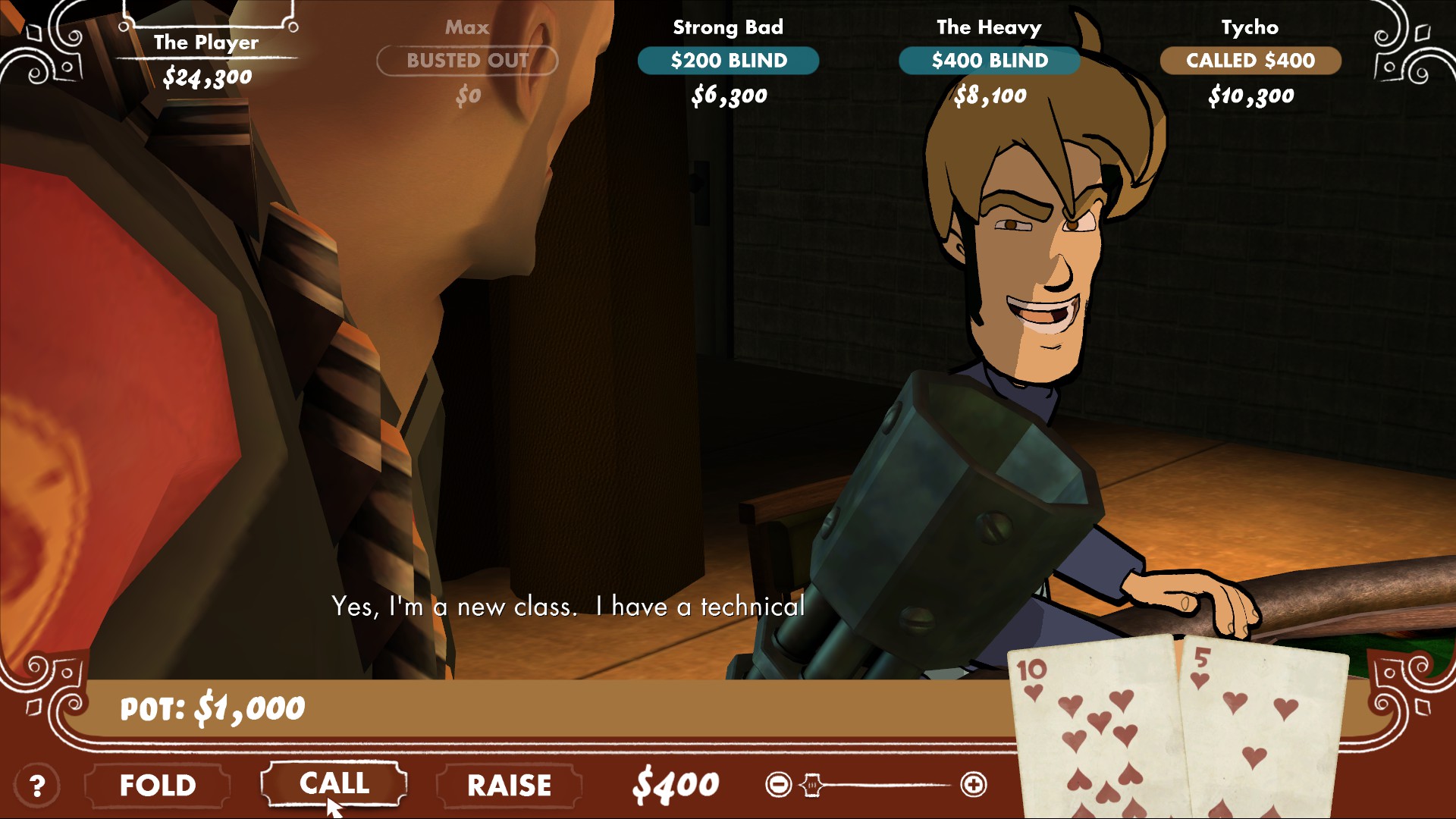 Now, there are some bugs here. Characters’ eyes often turn pure white, their animations bug out slightly, all temporary issues that pop up now and then. Audio also has a tendency to cut, like if something happens in the card game it will unceremoniously end a line of dialogue, which may restart from the beginning or just end there. It’s kind of weird, but again, small and rare matters.

By winning tournaments (i.e. finishing an entire game by eliminating all 4 opponents) you slowly unlock new tables and card decks to work with. It’s a small customization to be sure, yet I really enjoyed having the option to vary up what cards I played with or on what table. Additionally, you have a rare chance that one of the characters can’t fork over 10,000 dollars and will instead offer collateral. This comes in the shape of a possession that, if you manage to eliminate the character in that tournament, will be transferred to you in Team Fortress 2. There are 3 such items available, though the chance for them to appear is small and even then you still need to beat them in that round. If another characters does this before you or if you lose, you’ll have to wait for the item to appear again later.

Poker Night at the Inventory is a good poker game with a novel and kind of nerdy twist to it. While your mileage does increase the more you are into the series that are a part of it, I did have fun listening to Max and Strong Bad despite never having played or watched anything with them in it; I actually feel compelled to play Sam & Max now. The extra customization options and TF2 items are neat inclusions too, even though the game is already fun enough to warrant returning to now and then.