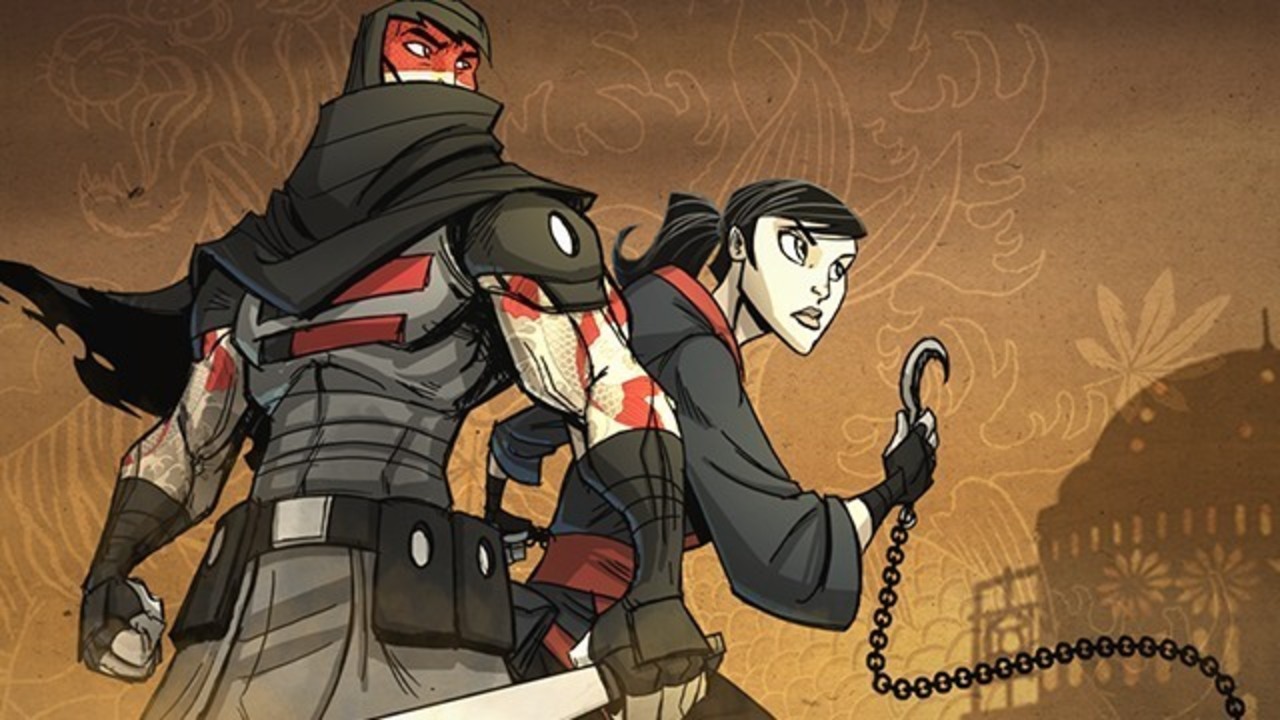 When it comes to indie gaming, one of the big names to look out for is Klei Entertainment. Standing proudly alongside the likes of Team Meat and Supergiant, Klei is responsible for games like Invisible Inc., Don’t Starve, and Shank. All of them interesting titles that mix a strong, central gameplay idea with different, appealing cartoon art-styles. Mark of the Ninja is another stellar example of that and one that I really should have finished when I originally bought it years ago.

I always find ninjas a weird theme to base any kind of medium around. They may be master assassins with a prominent place in much of Japanese history, but growing up with Teenage Mutant Ninja Turtles and their general portrayal as dudes sneaking around in black pyjamas has lend these historical killers a somewhat juvenile image. An image that Mark of the Ninja doesn’t seek to abandon, choosing instead to roll with it and give it a new touch.

You play as a member of a hidden clan of ninjas that have continued to stay true to their image well into the modern age. Though they stayed hidden for centuries, the clan is eventually found and attacked by a PMC commanded by a rich businessmen. After working your way through the compound, aiding your companions, and eventually rescuing your master, you are ordered to avenge the fallen by hunting down the man who ordered the attack, Karajan. The reason you are chosen is because you carry “the marks”, an elaborate tattoo that bestows the wearer heightened senses and special powers, though it slowly drives you mad. Knowing that you’ll have to commit suicide after the mission is complete, you head out into the big city to hunt down Karajan and murder your way through his private military.

Helping you along in this journey is Ora, a childhood friend from the clan that offers advice and shares bits of lore as you move through the levels. The story is all-around quite nice and advances at a nice pace while still letting gameplay take the wheel for a lot of it. Nicely directed cutscenes and a few in-engine “playable” scenes tell most of the plot and there are a few neat twists here that really make it worth playing all the way to the end. There is even a final choice moment that, like with Oneshot a few days earlier, had me pondering on what to choose, though in this case it was because the game deliberately wants you to make a decision without having all the facts straight. It’s definitely an open-ending that is up to a lot of interpretation, and I say that as a positive quality here; I was still rationalizing bits and pieces of the story days later, trying to figure out if I made the right choice or not.

Do you want the silent stab or the LOUD STAB

Or, you know… no stabbing. Mark of the Ninja is a stealth-action game set in large 2D stages. Most levels will have you complete objectives that require moving through huge buildings and zones, dealing with guards, dogs, security measures, and traps along the way. Freedom is a central concept here, as you can often choose between multiple routes to reach your destination or pick between a handful of different objectives. Most importantly, you always have a choice of what kind of ninja you want to be and the game rewards you regardless of play-style. 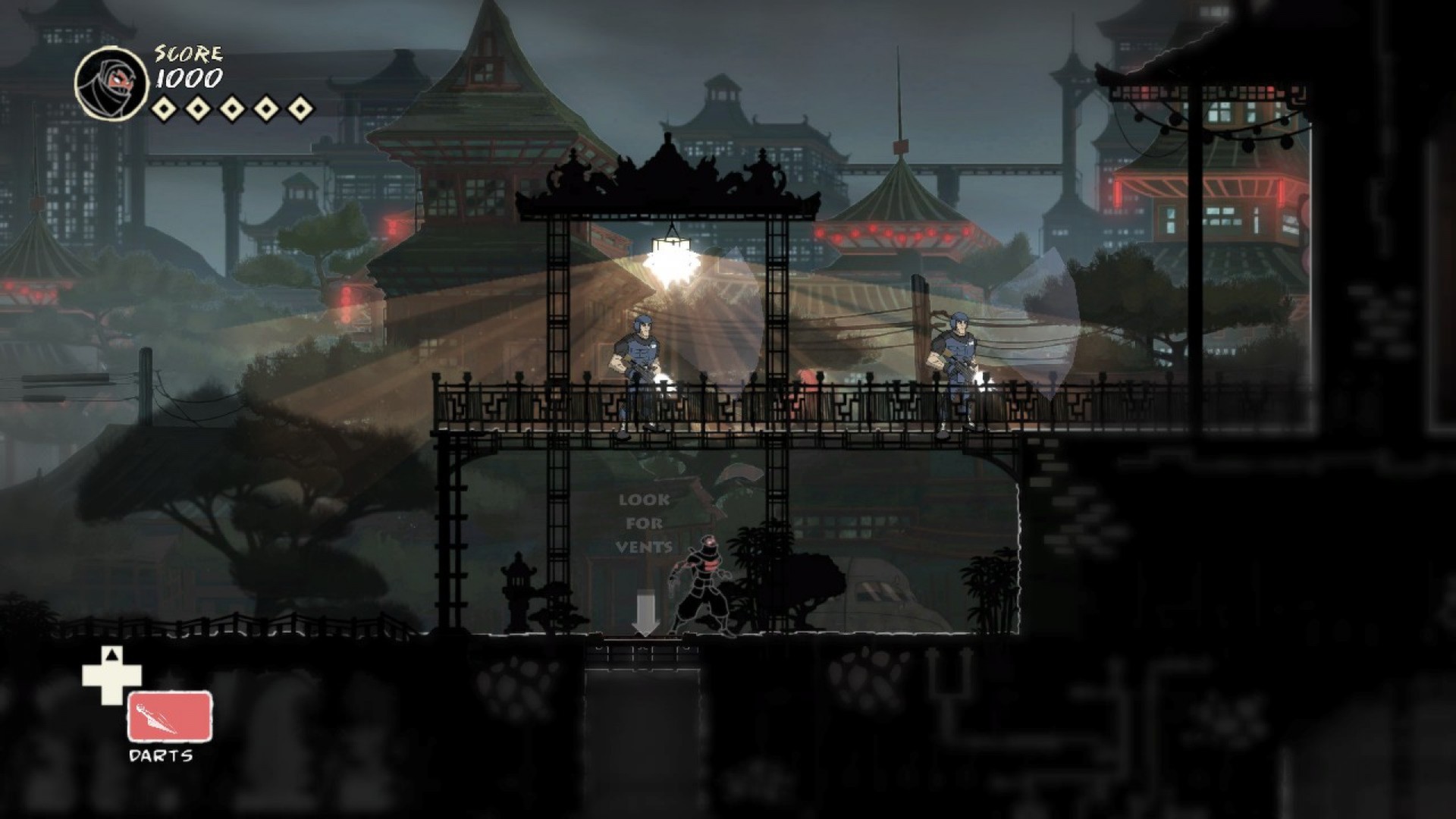 You can choose to be lethal and violent, taking down as many enemies as you can and leaving a trail of blood from one end of the stage to the other. In this regard the game rewards performing kills unseen, hiding bodies away, and being effective. You can fight normally, but melee combat is crude and geared against you, as enemies will try to create some distance and gun you down. You may be able to handle one guy, two if you luck out, but it’s not a fun way to play. It feels much better to clear out an entire room full of tricky enemies one by one, using tactical kills, hiding bodies, and setting up traps. It’s especially satisfying when you leave bodies in specific places, like hung from poles or directly behind their friends, as this can cause the mercenaries to panic and become a hazard to those around them.

The alternative is playing mercifully, staying out of sight, dashing between cover, and using distraction objects to clear a path. This often means using your kunais to destroy lights, as enemies have a short cone of sight in the dark, but can pretty much see you across the entire screen when fully illuminated. This is the play-style I really wanted to use because it just feels really cool to do, like solving an intricate puzzle. The game rewards this with additional tokens that can be used to purchase new tools if you made it through stages with no deaths or entirely unseen.

What Mark of the Ninja does really well is communicate with the player visually how stealthy they are. Everything that makes noises sends out a little bubble representing how far the sound carries, so if you run or break a light, you can see exactly which (if any) enemies can hear it. Enemies also have a clear vision cone that allows you to estimate how close you can get. It’s all useful information and I love how gracefully this game employs it. You always notice these visual cues, but they never feel off or like they are ruining the presentation, in the same way that, say, objective markers in roleplaying games do. Another great touch is that your character looks normal when in light (and thus visible), but when in a shaded environment he is a shadow and his tattoos light up.

The important thing is that both options are always viable, though some parts may be super easy if you just go for a kill instead of stealthing around, while others are easier if you avoid foes instead of trying to pick them off or engage them. If you’re willing to mix around how you play it’s no problem, but this can make it tough to dedicate yourself to murdering everything that moves or going the true pacifist route.

The game is not perfect however. The controls, especially on PC, are a little jittery and I often struggled to have my dude follow along with my intentions. This leads to situations like repeatedly entering and exiting a ventilation shaft, when what I want to do is start crawling on the ceiling just above the shaft. The quick-time event to pull off stealth kills is also a bit unpredictable and would sometimes fail when I was sure I did it right or succeed when it seemed like I messed up the prompt. The game also got a little annoying towards the end when the final few enemies were just too much of a hassle to deal with. These issues combine in the final enemy type, which is such a bother to deal with that flight is the better option, but the short-range teleport skill you unlock at about the same time is so glitchy and unreliable I really had to push myself to stick with the game so close to the end. It was worth it for sure.

In terms of presentation Mark of the Ninja really reminded me of Klei’s earlier work, the 2D action game Shank. It utilizes an appealing cartoon style that, despite the innocent and safe atmosphere visuals like these provides, still allows for a good bit of violence. Blood gushes freely as you slit throats, dead bodies stay around and can be moved or hung from morbid places, and some of the traps and tools you’ll run into can be brutal. 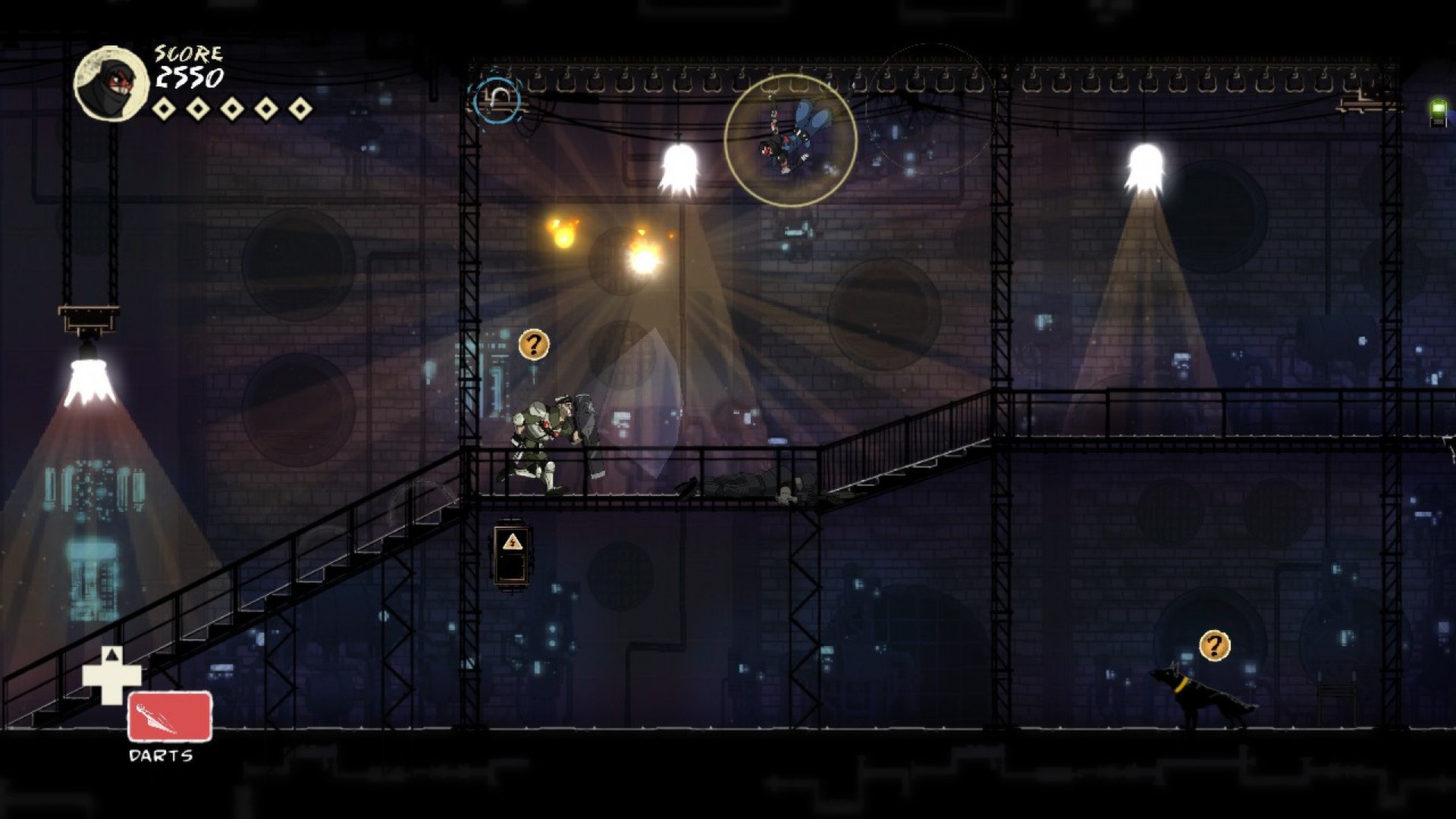 I do have to say I find much of the level design kind of bland and repetitive, with interiors and exteriors looking kind of samey across entire levels, and themes being repeated a few times for good measure. I have a lot of passion for anime and I am pretty interested in Japan as a whole, but I am remarkably not fond of their historical architecture, and Mark of the Ninja often goes for the low-hanging fruit in that regard. With how dark and shaded everything has to be for the ninja gameplay to work, the game also lacks the kind of vibrancy and mixture of colors that make a game like Shank 2 so cool to play.

Even so, the visuals in this game have a lot of use in gameplay, and from that viewpoint it might actually be a benefit to not overstate the rest of the presentation. The same applies to the soundtrack, which is kind of what you’d expect from a ninja game and doesn’t go anywhere particularly interesting. Though in regards to the music I have to point out they commissioned an actual band to do a song for them that serves to underline a very important part of the story, but it’s such a brief bit of gameplay the song barely gets started before you’re at the next part already.

You can freely replay any of the game’s levels and work on getting more honor, which is the currency used to buy new equipment with. The best way to do this is by completing side-objectives around the level, as well as succeed at the no casualties and no alarms raised challenges that are always available. Hidden in the levels are also scrolls that tell bits of lore and a challenges that provide other unlockables.

I really enjoyed my time with Mark of the Ninja. What it lacks in visuals and music, it makes up for with diverse and challenging gameplay, a story that is really cool to follow, and by giving you the freedom to decide your own play-style. It’s well-realized and creative games like this that make Klei the indie juggernaut that it is, and if you have any interest in stealth games or want a game about ninjas, then this title can’t be skipped.