When I first got my NES many years ago, Golf was one of the three games I bought along with it. Of course, I also had Super Mario Bros., you can’t go without that one, but what made Golf special over the years is that I kept it complete. Back in the day we used to tear up the boxes games came in and throw them in the trash, and manuals usually got lost one way or another. Golf was spared this fate and for years it remained as my one and only complete NES game. It’s not much to be proud of, but it made me look forward to reviewing it.

The straightforward title on the box is exactly what you are going to get out of this game. Golf is golf, it’s nothing too exciting or special, just another competent sports title for Nintendo’s beloved console.

The controls are simple. You see a top-down view of the stage and can aim where you want the ball to go. You then press the A-button to start a wind-up for the swing, then A again once the wind-up is where you want it to be, represented by a power bar beneath your golfer. The bar then rapidly shoots back to the starting position as you swing and challenges you to hit A a third time right as it passes over the marked portion of the bar, which will give you the most straight shot possible. Hitting it too early or too late will cause the ball to veer off, though this is also affected by the direction and power of the wind, displayed on your HUD.

There are a total of 18 courses to clear with fun layouts, from straightforward fields to series of islands. The power bar is innovative for its time and works well; it adds skill and timing into the mix, plus it allows for some strategy by intentionally causing a ball to stray from the intended path. An issue I do have is that the directions you can hit in are rigid, so sometimes getting the shot you want is not 100% possible. You can get pretty, though. 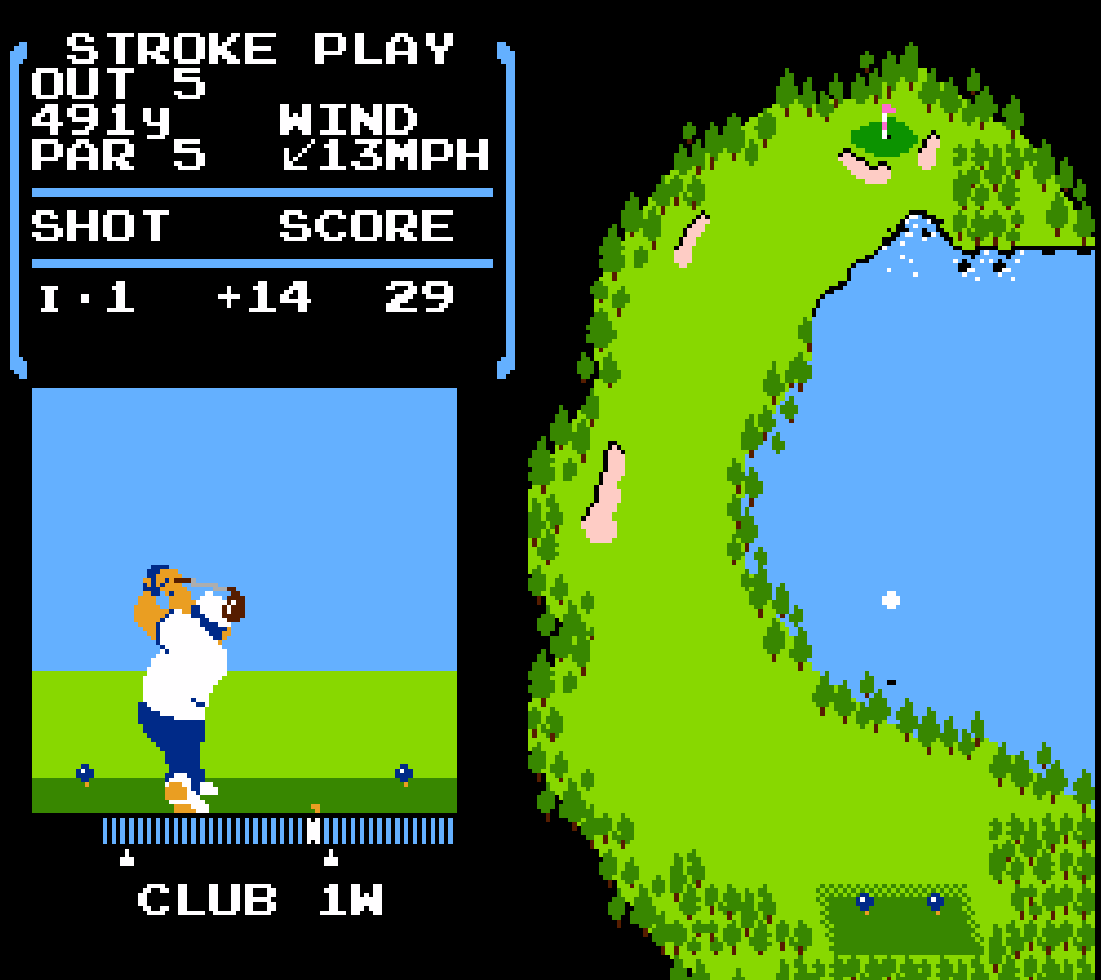 Another feature that is confusing and which caused me the most annoyance are all the different clubs. I know nothing about Golf, but also didn’t know a darn thing about American football either, and managed to learn it pretty well through playing its NES game. Golf just really confuses me because all the clubs ostensibly have different stats and qualities, none of which are immediately apparent. The game always defaults to either the strongest one or the putter, so I tried to stick with those. Any time I felt compelled to use another club, it ended poorly for me.

Golf also doesn’t have the replay value of 10-Yard Fight for me. It’s some okay fun to play through its courses once and for the time the mechanics are a novelty, but after a single round I shut off the console feeling quite confident I’d never feel the need to replay it. Of course, this may vary and perhaps you’ll feel compelled to perfect your strategy for each course, but that didn’t have much value to me.

Dual-screen play 20 years before the DS

The screen is split between the top-down view of the golf course and the hud information that goes accompanied by an image of your golfer. If you play it multiplayer then there are two different golfers, but both of them animate the same, so it’s purely a matter of what shirt you prefer. I do have to say I enjoy having the sprite there as a visual representation, otherwise the game would just be a map and numbers.

The various stages do look pleasing, with all of them having nice layouts and visual details to them. In that regard, this is definitely the most visually pleasing game of the NES sports launch titles, though that goes at the cost of having next to no soundtrack and few sound-effects. There were times where I was playing this game and was honestly not sure if I had it muted or something, there is just so much nothing and that really stinks.

If you enjoy playing virtual golf, then Golf on the NES is a classic that may have aged plenty, but still holds some merit. It’s a fun game to play a for a bit and innovative for its time. If you have no prior interest in Golfing, however, then don’t expect this video game to be your entry into the sport.