I tend to like complex strategy games like Crusader Kings a lot, but at other times I can appreciate more simplistic strategy games also. 911 Operator caught my attention because its theme seemed very grounded and interesting. Operating the emergency services for an entire city struck me as an interesting job and one I hoped I could learn a bit about through this game. While the real thing is probably a bit less exciting, I do feel it has been a fun and educational experience.

Rather than just answering phone calls all day, 911 Operator gives you a bit more power. The game takes place on a map of a city and this can really be any city. I thought it was an exaggeration, but you really can play anywhere as far as I could test. Big cities like New York and San Francisco are obviously there, but so are smaller cities like my hometown. Street names and the locations of hospitals, police, and fire departments are also accurate, making this a major selling point for me.

Anyway, on whatever map you choose, you got color-coded icons for the vehicles you have under your command: red for firefighters, white for medical, and blue for police. Throughout each day other icons with the same color-coding will appear on the map, representing incidents. These you then respond to by directing the appropriate vehicles. To a degree, it is just a simple case of matching colors, but you also have to guess at how many resources you need. A simple speeding case can probably be solved by one cop on a motorcycle, but in a hostage case, you’ll probably need at least a car that can transfer the criminal to prison, as well as cops that are actually armed and ready.

Much of the strategy comes down to spreading your resources out across the city so you can fix problems before they time-out, as well as making sure those resources stick around properly. A few hours of patrols and a few cases might suddenly leave a part of the city unprotected, which you’ll regret when somebody then gets a seizure there and you can’t reach them in time. 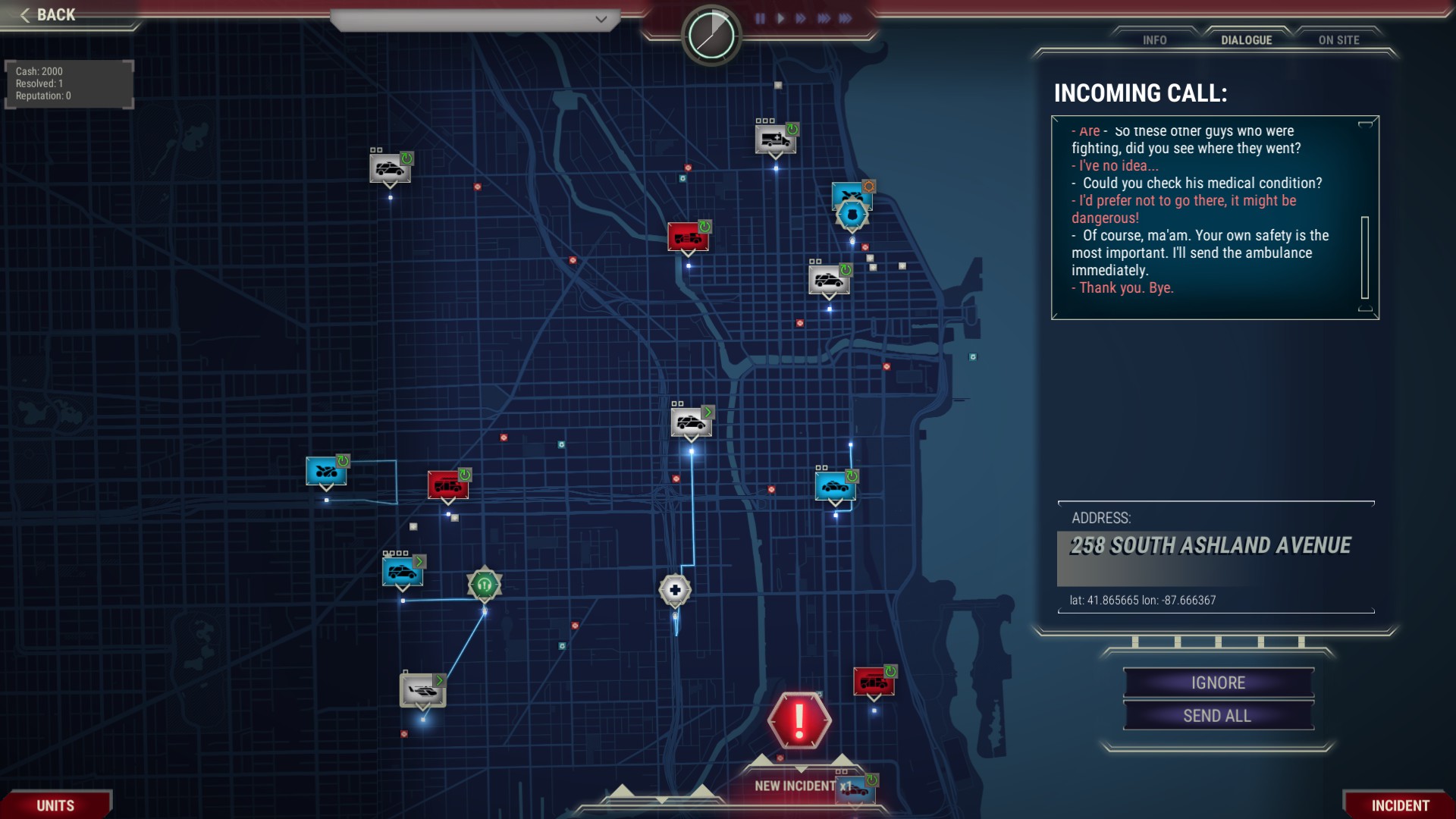 The goal of each day is to keep a positive reputation, which you do by solving cases and taking phone calls. During these phone calls people will be asking for your help and you have to give advice. Giving the wrong advice or asking the wrong questions means things go wrong and you lose points, as does sending emergency services out to solve cases that probably didn’t need it or letting cases time-out. These calls are fun, if a little too easy. There are few options and while the game does give you lots of first aid advice on its loading screens, only rarely was I asked to use any of them during these calls.

After each day you are awarded money based on your performance and the number of fines you handed out, which you can then spend on hiring new or better staff, buying new vehicles, and getting equipment. Each employee has some relevant stats, like driving, first aid, and marksmanship, and can hold up to two items. For officers, this could be a gun and a PDA, maybe give them a fire extinguisher so they can optionally do a bit of firefighting on the side. This is nice, but I kinda wish there was more of it.

Besides the free mode, there is also a campaign, which has you take on a number of big cities back-to-back. These are also more scripted, so you are sure to at some point face prison breaks and big disasters. It’s a fun mode and got me to play in cities I otherwise wouldn’t, but the structure is strange. You are only in each city for two days and then switch to the next, meaning you start over in the next one with new staff and no funds. You can’t work towards anything and it made me really indifferent to the lives of my staff. Who cares if they get wounded in a shoot-out, I’ll be in a different city in 10 minutes. 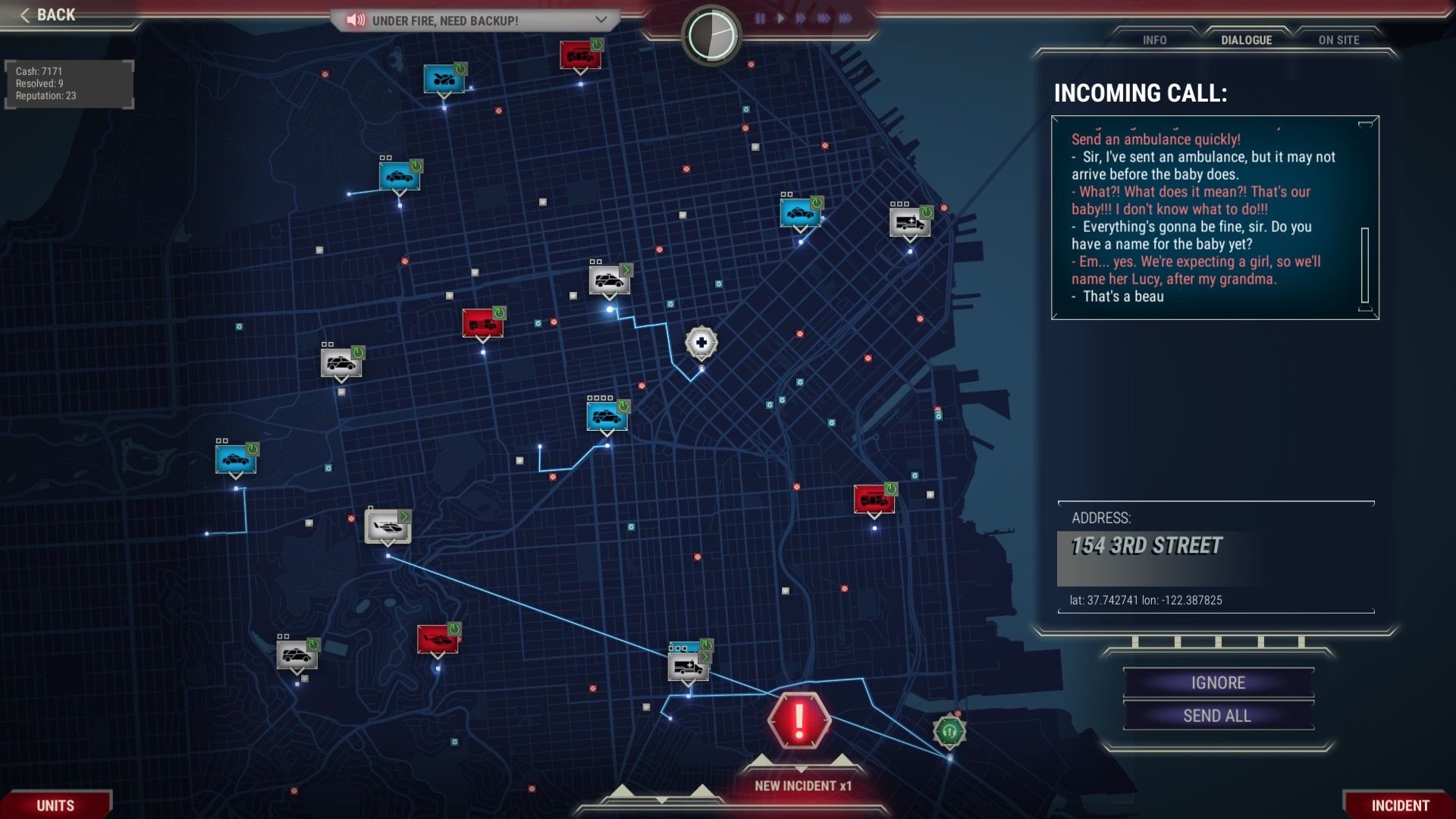 The gameplay is entertaining and I definitely got my money’s worth from it, but I do fear it can’t last for long. Being able to pick any city you want to play in is neat, but 911 Operator has very little to work towards. Each city starts you off with sufficient resources to handle anything it can throw at you, so all the money you get just goes into optimizing your force far more than you could ever hope to need. I got about 3 hours out of the game before phone calls started to get recycled, but I was still having fun with it at that point.

911 Operator uses a nice, high-tech style wherein you are presented with a city map, supposedly on a large monitor that also displays the location of each unit and problem as represented by the aforementioned, colored icons. I think the game has some sort of tool that lets them read and convert data from Google Maps into the game, because all the maps look good and match, as far as I can tell, the real-life counterparts.

The maps look good and throughout each day you got a lot of ambient noise through radio chatter and sound-effects like police sirens. The chatter is a bit repetitive, but easy to dismiss as just background noise. The calls you get are voiced, but you do notice it was done by amateurs and there were few actors to go around. You’ll hear a lot of voices multiple times and many of them don’t really get enough emotion across. A few do manage and there were some fun and stressing calls in there, which makes it a shame you can’t really see these stories conclude. You might be helping some dude who is slowly bleeding out, trying to keep up some chatter to keep him conscious, and then at the end of the mission you just get a generic “victim was brought to the hospital”.

911 Operator has a novelty appeal to it and delivers exactly what I hoped it would. If like me, you are interested in what’d be like to be an operator for 911 (or your local equivalent) then this game offers exactly that and little else, so if you couldn’t care less it’s safe to skip this game. With its ability to pull real map data and the variety of calls and situations you are asked to tackle, 911 Operator is a good package and game I had a lot of fun with. Do keep in mind, however, that the story mode is lacking and the game doesn’t have much to work towards.