The more you try to censor or ban media, the more desirable it becomes. This was true when countless kids begged their parents for Grand Theft Auto or perhaps even Doom if you are a bit older, and it’s definitely true for HuniePop. I would not have cared about this game in the slightest, were it not for Steam’s infantile attempts to censor it and the developer’s cheeky ways of bypassing its demands. Suffice it to say, I purchased my copy from the Humble Store and decided it was high time to figure out what this forbidden fruit had to offer. Besides the obvious, of course.

After another hopeless night of trying to seduce women, presumably ending on a solo act, our nameless main character awakens in his bedroom in the presence of a pink-haired girl in a bizarre dress. She introduces herself as Kyu the Love Fairy, a foul-mouthed creature that offers to help our sad main character become a master of seduction. Turns out it’s not our looks or personality that condemn our romantic attempts, it’s that we didn’t know how to play Bejeweled. 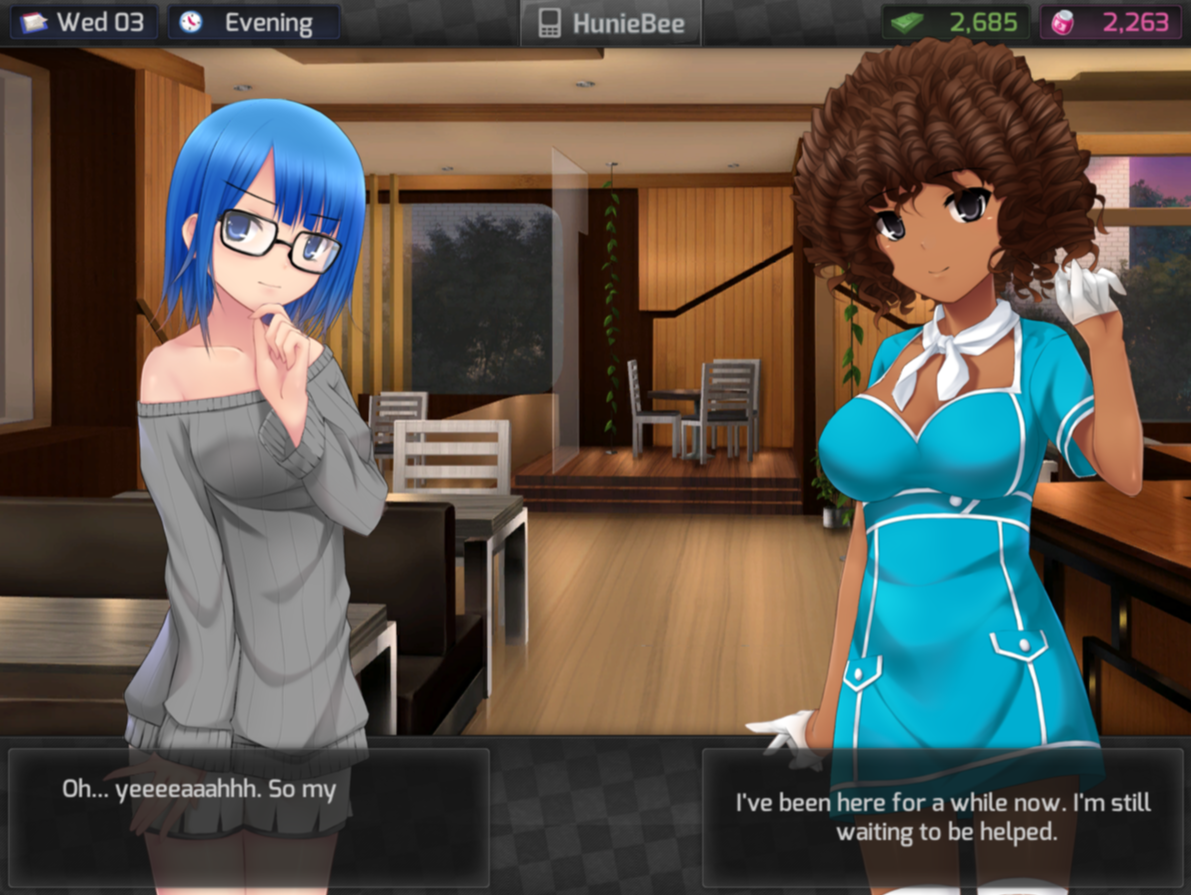 With Kyu’s guidance, we set out to find some lady friends to impress and a fun thing that HuniePop does is that its roster of characters is introduced as a sequence of events where we keep meeting acquaintances and friends of friends. It’s a hilarious and well-executed way to get a diverse cast of characters involved.

The 8 available women all represent familiar archetypes, yet also some that are wholly under-represented in anime culture. There is the Mexican fitness girl Kyanna, the spiritualistic yoga instructress Beli, the black stewardess Lola, and the perpetually-angry party girl Audrey, just to name a few. These stand alongside more typical characters like the cheerleading student Tiffany and the Japanese teacher Aiko.

I honestly enjoyed the cast of characters. They aren’t as solid and well-developed as more focussed dating-themed games like Katawa Shoujo, but they all have fun qualities to them and the voice work added a lot to their personalities. I also appreciated having characters differ in age a lot, with most of the ladies being somewhere in their mid-20s. Kyu was probably my favorite character, as I got a lot of laughs out of her blunt and quirky advice. If I had to raise a complaint, it would be that the game feels kind of cynical to me. You don’t really dedicate yourself to any one character, rather you cruise between various different ones and, more or less, cheat your way through life. The game incentivizes you to be a manipulative bastard, going from girl to girl and adapting your persona to whatever scores points with them. You’re probably not meant to think about it like that, but I kind of felt like an ass from time to time.

Each day in the game consists of a morning, afternoon, evening, and night, with time passing only as you move from one girl to another. When you meet with any of the girls, you have several options available to you. To further your relationship you need to do dates, which take on the form of increasingly-difficult Bejeweled levels. You play a typical game with tiles that represent sexuality, talent, romance, and flirtation. You can click and drag a tile anywhere in a straight horizontal or vertical line, then release it when you can place it somewhere that creates a matching pair of at least 3 tiles. You are awarded extra points for matching up 4 or 5, and each date requires you to get a set amount of points within 20 turns.

The number of points each type of tile gives is further altered by the preferences of the characters and the “passion” of the date. Passion can be increased by matching up the heart tiles, but by increasing it you stand to lose more points when you accidentally line up any broken heart tiles. These are difficult to avoid and can ruin an entire date with a single mistake, but you can turn the tide with date gifts that become available after matching up tear-shaped sentiment tokens, such as one that turns all broken hearts into regular ones or a gift that immediately removes all tiles of a certain type from the board. There are also joy tiles that grant an extra turn after being matched up. It’s a lot of information and, if I am honest, the game would benefit from having a legend available. Talent and Sexuality were obvious enough, but I was constantly confused between Romance, Joy, and Flirtation. Once you wrap your head around it, however, HuniePop reveals itself to be a remarkably good puzzle game. The Bejeweled gameplay is perfectly functional and all the various tiles and date gifts allow for fun strategies, with the promise of getting more interactions with a character serving as a great reward to deal with the increasing challenge.

Besides the dates themselves, players can also chat with the characters and send them gifts. During conversations you earn Hunie, which can be used to upgrade your stats that increase the points you get during dates or improves the RNG. Each conversation allows you to ask a question that reveals more information about that character, but at other times they will ask you something or quiz you. By giving the correct answers or saying something they like, you earn a bonus payout of Hunie. You only get so many interactions with any lady, however. A hunger meter represents their willingness to interact with you, with simple talking consuming a whole 2 blocks of food. You can get additional Hunie by buying the girls the correct gifts or get more time to chat by buying them food, but they’ll only accept the food and gifts they actually like and you only have so much money to spend. Money is earned by earning points in dates, but those too require a character to not be hungry. Additionally, you can increase the amount of Hunie you get by drinking lots of booze, which I completely approve.

So you might be wondering by now: what about the love-making? Well reader, fear not, for there is plenty of the ol’ four-legged foxtrot to be found in here. After maxing out your relationship with any character, you can take them out for a date at night. By succeeding this date, you then get a bonus round of mingling limbs in the bedroom. This takes on the form of another Bejeweled game, but one where speed is of the essence. As your unseen character and ladyfriend get busy with the struggle-snuggle, you have to match tiles quickly to fill up a constantly-depleting points meter. This mode has fewer types of tiles and no gifts, so getting combos is easier and play is much faster. Fill up the meter and your jiffy-stiffing is successful.

HuniePop is, surprisingly, a fun game to play thanks to its competent puzzle gameplay, but there is some room for improvement. It’s a bit cheap that items in the store give away if the girls will like them and that there is no penalty for getting the quizzes wrong or even insulting the girls. Considering so much effort has gone into making these characters memorable, I feel players should at least be expected to pick out the proper gifts and put effort into answering their questions.

This is usually the point in the review where I talk about the presentation of the game, but that takes on sort-of a double meaning in this case. Like their personalities and backgrounds, the designs of the girls are diverse and delightful. They largely abide by how you expect modern anime characters to look and while they don’t animate much, they do have multiple expressions and poses. Perhaps most surprising of all is that the game is fully voice-acted and quite competently so. I did need to get used to Skyler Davenport as Nikki, but all the other performances I really enjoyed, especially Jaclyn Aimee as Kyu. While the main reward for completing a character’s romance is getting to do the boom-boom in the bedroom, you also get various smaller rewards along the way. Each character has around five different outfits and hairstyles, which you get through various unlock criteria. These were really cool, especially when you set them to random and get to see the girls in different combinations each time you meet them. For completing dates you also receive pictures and selfies of the girls, which become increasingly lewd as you progress. Due to WordPress policies, I only get to show the tamer pictures, but even those are really nice.

Besides the 8 available girls you can already romance and the bonus outfits, haircuts, and trivia for them, there are an additional 4 characters to be unlocked as extras. Two of these will come as a matter of course as you work to complete the base game, but the remaining two require a bit of experimentation to get. To be fair, I would say that especially the last girl almost requires you to use a guide or wiki. I had to rely on that as well and seriously didn’t even know you could do the actions required to get that character.

The game has multiple save files for those who want to replay or perhaps even share the game, as frightening a thought as that is. You can set the game to multiple difficulty levels, which changes how many points you need to complete a date and seems to make newly dropped tiles more beneficial to you. Finally, there is the option to play the game as a woman, but all that does is alter dialogue in a number of places. You can even switch between gender in the options menu and the altered dialogue is fun if you are really looking for it, but it also removes some of the saucier pictures you unlock due to your lack of white troopers, making it difficult to recommend this mode.

I attempted to 100% this game and while I did get to romance every character, the game’s own counter also wants you to buy each character every gift they will accept and learn all their trivia, both of which are RNG-dependent. Once you complete the game by my definition, you do unlock the ability to buy gifts outside of the randomly-assembled selection of a day, except it costs a ludicrous amount to do so. Kyu will also offer you Alpha Mode, where the game is locked to hard and dates keep getting more difficult. I didn’t try this mode myself, mostly because it required me to surrender all the panties I collected across the game and I refuse to do so.

HuniePop is a game that deserves to be famous for more than just its controversy. It’s the kind of casual-style puzzle game I find really satisfying to play, as completing all the relationships, getting all the pictures and extras for each girl, really gives a driving motivation to keep playing. The Bejeweled gameplay is solid, with the gifts providing an extra layer of strategy and the statistics you upgrade with Hunie making the late-game content increasingly easy for players who struggle to proceed. And darn, the art and voice acting is so nice, they make the game feel like a premium-quality title that is worth paying for despite the internet’s over-abundance of free alternatives.

With that said, I can’t recommend getting the Steam version. Firstly because Valve arbitrarily threatened to ban anime games like HuniePop, but also to avoid having to manually patch the nudity back into the game. It’s probably also better for your social standing if Steam isn’t publicly announcing how many hours of HuniePop you are clocking on Friday nights.