The sixth generation of consoles marked an interesting period for Nintendo where its games were getting more experimental. The release of the GameCube represents this well, as it was the first time a Nintendo console would hit store shelves without the company mascot Mario. Super Mario Sunshine wouldn’t arrive until 2002, so instead we got Luigi’s Mansion.

It’s a game I had myself, but as a kid coming from Super Mario 64, its new ideas were difficult to understand and I could never get far in it. Today, I am finishing what my younger self could not and finally give Luigi’s Mansion the time it deserves. Just in time for the upcoming third installment.

The plot sees us assume the role of Mario’s brother Luigi, who has just received a letter informing him that he has won a splendid mansion. Mario has gone there ahead of him, but when our green-capped hero arrives, he finds the mansion looking more ominous than the pamphlet implied. Once inside, Luigi is attacked by ghosts and promptly saved by an elderly professor called E. Gadd.

He informs Luigi that the mansion had appeared just recently and a band of Boos attacked his laboratory. The Boos made off with his paintings, which imprisoned all the ghosts that E. Gadd had captured across his career. Both these ghosts and the Boo army are now holed up in this mansion and Mario is presumably captured by them. After some training, the professor passes the torch unto Luigi and tasks him conquering the mansion, freeing his brother, and capturing the many ghosts.

It’s an elaborate story for the Mario universe and one that I quite enjoy. The mansion has a lot of mysteries to it and the ghosts you need to capture all have personality to them. This rings especially true for the ghosts that E. Gadd captured, but the Boos also have silly joke names and introductions. E. Gadd himself is also a fun inclusion, though I will say that characters like him and some other allies are a bit too talkative and the comedic dialogue doesn’t always land very well.

Equipped with the Poltergust 3000, Luigi has to brave the many rooms of the mansion and defeat all the ghosts. Each room is a mini-challenge where ghosts will appear and attempt to hurt Luigi. By shining the flashlight on them, the ghosts become startled and can then be sucked up by the Poltergust. While trying to suck in a ghost, the number showing their health rapidly decreases and they attempt to pull away from the player. By steering in the opposite direction with the C-stick, you can prevent being dragged along or losing the ghost.

It’s a fun gameplay loop and definitely impressive when you lose footing and get dragged along the room or awkwardly dodge away from another ghost while trying to capture another. The ghosts are also diverse and have different strategies for hurting Luigi. It’s a game that requires tact, like flashing a ghost at the last second or trying to capture multiple ghosts at once.

The controls are generally fine, if a little difficult to get the hang off. You view the game from a static camera angle and the control sticks move both Luigi and change his orientation. This can make it difficult to judge where you need to steer, especially when you need to look up or down while also turning around. It’s easy to mess up and get hit, which only becomes more troublesome when you gain temporary power-ups that turn the Poltergust into a flamethrower or hose, which also require precise steering to solve puzzles with. 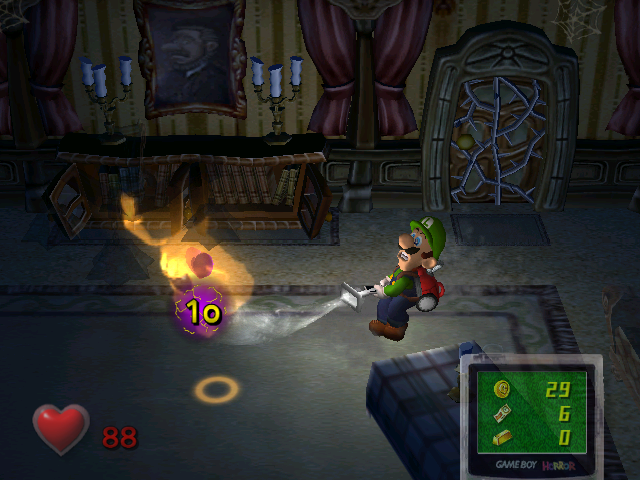 On that note, finding the special ghosts and figuring out how they can be captured is fun. They each have their own personality and a lot of health, but you have to find out when they expose their weaknesses. It’s definitely the main appeal of the game for me. Each chapter of the game also ends with a stronger ghost, which will teleport you to an arena to act as a boss-fight. After these battles, Luigi is brought back to the lab in order to clean out the Poltergust and count the spoils.

I do have to say that the real boss-fights are lackluster. They often require more precision than the game’s camera angles and controls allow for, which becomes especially true when the difficulty climbs. You can’t improve Luigi’s health any and boss arenas never seem to have any hearts to restore your health with. The final boss was especially annoying, as you need to pretty much hug the explosives he throws at you in order to grab them with the Poltergust, and firing them back at him will often see them phase right through instead of counting as a hit.

Besides these ghosts, there are also a few dozen Boos on the loose. These inhabit rooms that have already been cleared and hide in objects, requiring the player to seek them out. Battling a Boo is different from ghosts, because they don’t respond to the flashlight at all. You simply suck them in and attempt to keep the Poltergust targeted, which is harder than when facing any other type of enemy.

As a final negative, I’d have to say that Luigi’s Mansion makes poor use of some of its mechanics. The elemental power-ups for the Poltergust come into play only rarely and, since you can only have one, the game will often put these power-ups in the rooms where you need them or close by. You also have the Game Boy Horror, a sort of smartphone that has maps, statistics, and a scanner in it. Besides the map, you really never have any use for its other functions, until the game suddenly has a puzzle that requires it.

The gameplay is not for everybody and it’s not hard to see why some were down on the GameCube’s launch line-up. The game is also short, yet I would argue that Luigi’s Mansion is still worth having for its unique gameplay. You aren’t going to find any other game quite like it and that, in my eyes, more than excuses the flaws and iffy controls.

Resident Evil has been bested

This is one of those games that takes a horror setting and infuses it with a dose of comedy and cuteness. The mansion is suitably atmospheric, with ghostly laughter, creaking floors, dark hallways, and mice and bats infesting the place. Luigi’s response to this is endearing, as he moves with trembling legs and looks around worriedly. There is even a cute detail where, if you press the A-button, Luigi will cry out for his missing brother with a number of different dialogue lines. 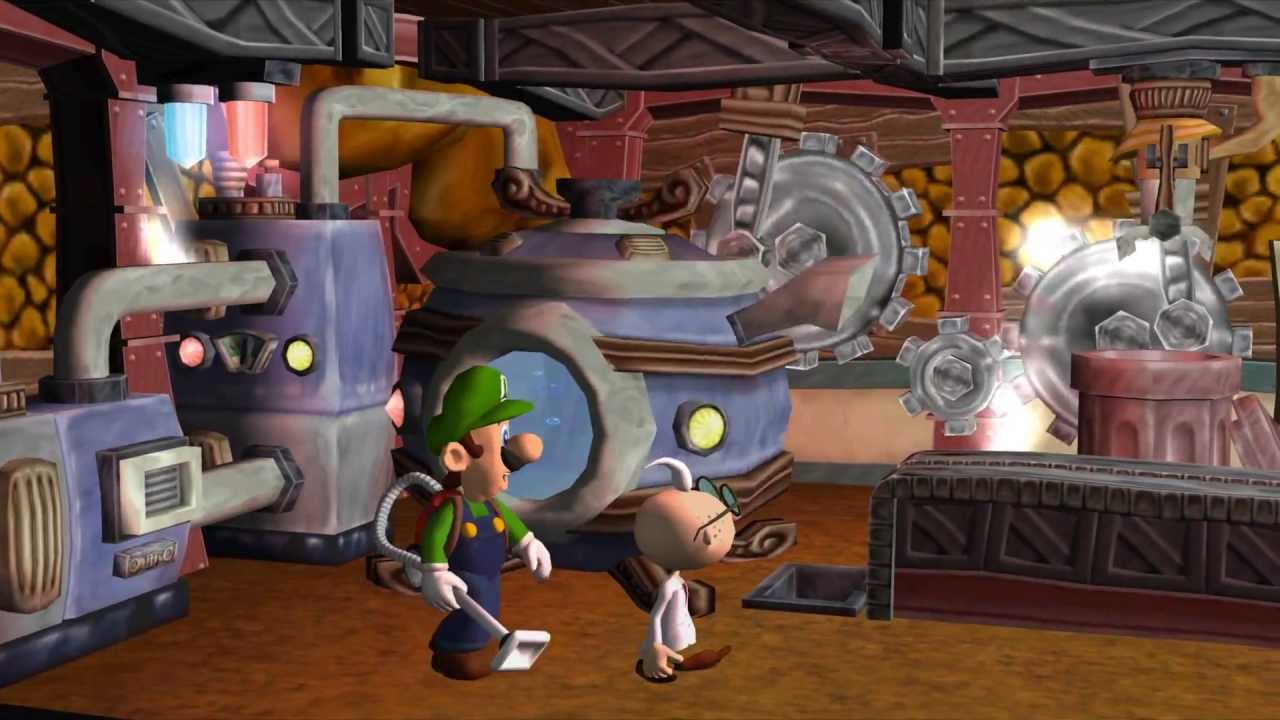 Another cool effect is that rooms where you defeated a major ghost or cleared out the little ones will then be permanently lit up, which also happens if there is a Toad (save point)  in that room and you have spoken with it. It’s a clever indicator of safety and it makes you feel like you are slowly making the mansion pleasant again. The music also changes in rooms that are lit up by playing a more upbeat version of the main theme.

I also adore the look and feel of the mansion. The rooms are all well-designed and stitched together well, with 4 floors that all feel different. The layout is a bit obnoxious and necessitates a lot of backtracking, but there are so many effects and details crammed in that I can’t help but be impressed. With that said, the small, static portraits used in dialogue and the simplistic design of the paintings could have used more work.

All about the money

The game is cut up in 4 chapters that gradually unlock more of the mansion and yield more power-ups, making this an overall short game. Not every ghost is mandatory either, though most will be and it will be hard to miss any of them. On top of that are the 50 Boos that must be captured, which is a requirement for accessing the final boss. It’s a bit of hassle, but if you don’t put it off until the end it’s quite manageable. You even get 16 of the Boos for free.

There is also money, which can be found hidden in objects or by capturing rare ghosts. The money you accumulate is counted and results in a variety of different endings, but being hit by ghosts or falling for traps causes you to drop some. It’s a fun addition, but players don’t have much impact on it because of the infrequent drops and the small handful of coins lost when getting damaged. It really feels like you’d have to actively avoid money if you wanted one of the lesser endings.

Luigi’s Mansion was an influential game in the GameCube library and one that sadly went forgotten until getting a sequel on the 3DS many years later. Its unique gameplay based around capturing ghosts and the stellar presentation make this a memorable game, even if it is short and younger players may struggle with it. Was it a good move to make this the vanguard of the GameCube library? No, but I am glad Nintendo eventually decided to pick up this series again.