Sniper Elite was an interesting third-person shooter held back by bodged mechanics that put it a few steps behind its competitors on both console and PC. The franchise would lay dormant for 7 years, until Rebellion suddenly revisited the idea in 2012 with Sniper Elite V2. While it’s not quite a remake of the first game, it does cover many of its ideas and the story overlaps in numerous places.

Once again we find ourselves controlling a lone sniper dropped in Berlin amidst the Soviet invasion. With the war drawing to a close, the priorities of the higher-ups have shifted and they are now concerned with the potential aftermath. Germany has highly advanced rocket technology and it’s obvious to all that the Reds are after this tech. 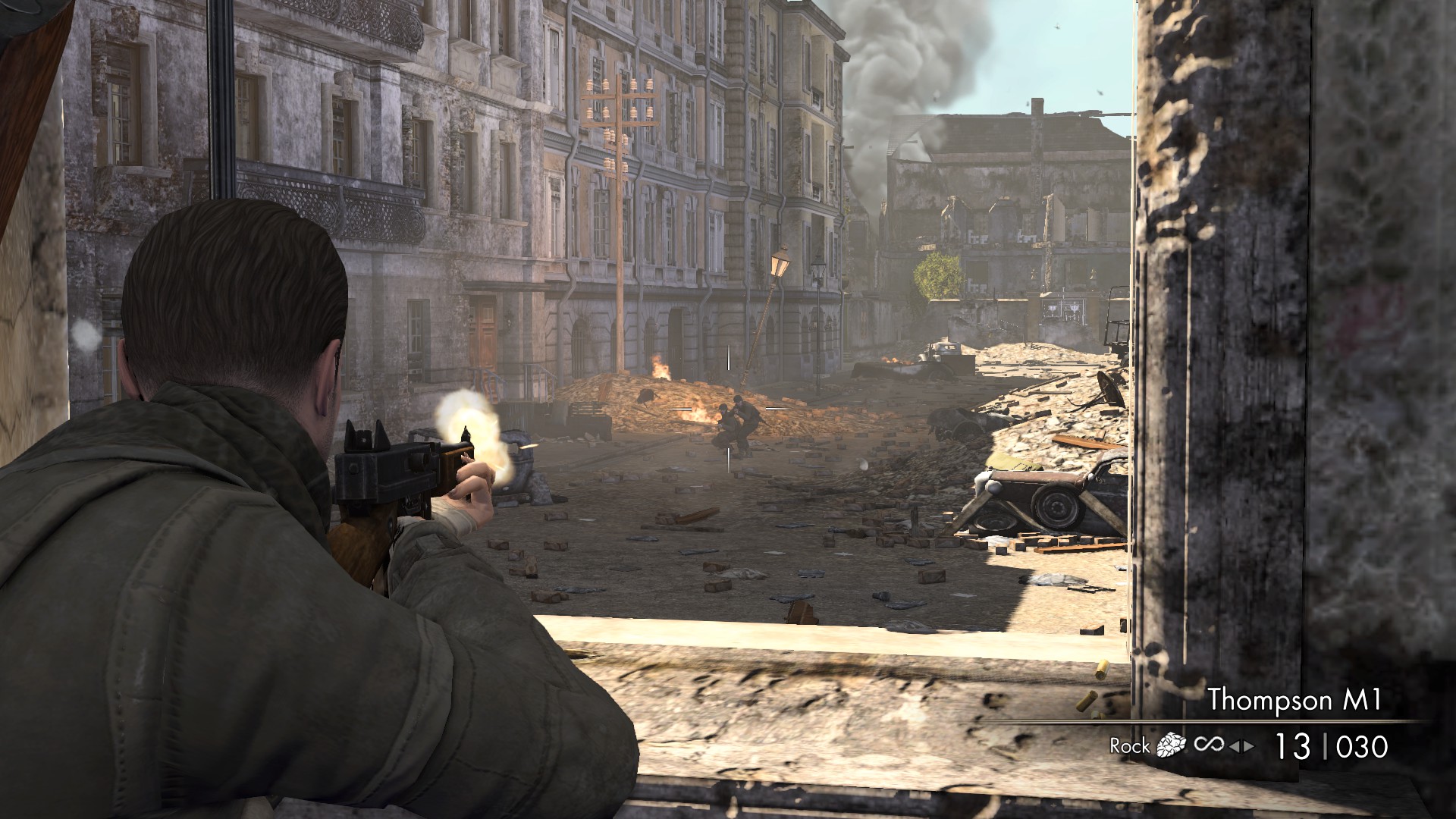 Your mission this time around is to go into Berlin and assassinate the 5 top scientists that worked on the German V2 project before they fall into Russian hands. The story does a nice job of bridging your dual role as both a soldier and a spy, as you also discover information about a plot that suddenly changes the entire course of your mission. The final missions were especially thrilling and definitely not what I was expecting when I first started playing the game.

An effort has been made to flesh out Karl Fairburne, the protagonist, a bit more. While in the first game he rarely spoke and we had to judge him by his actions, he now has a lot more dialogue and narrates his own mission briefings. However, he just ends up being a basic, gritty soldier archetype with no discernible characteristics. There are also few side-characters and the game lacks the interaction with factions and suppliers that the first game had. A shame, because the game could have had a lot more personality and given Karl some traits matching his role as a plotting spy.

A distant enemy is the best kind of enemy

As a sniper, your goal is to assassinate each of your targets and achieve a variety of other goals along the way. Since your specialty is sniping, each mission starts you off with a bunch of ammo for the rifle, as well as a silenced pistol and a secondary weapon. Both of these are usable, but very inaccurate and ammo for them is sparse, so you really want to snipe as much as possible and avoid direct encounters. 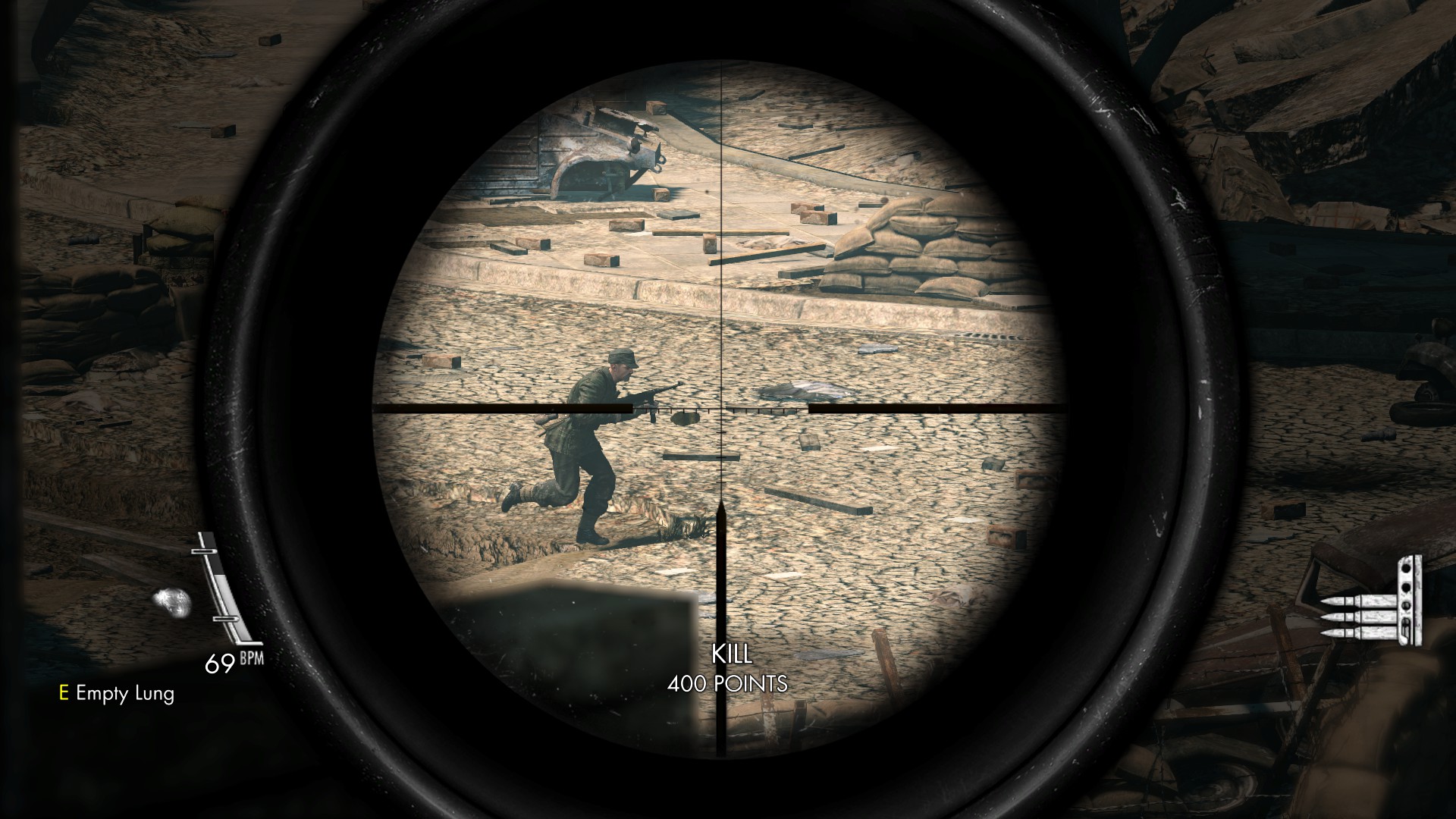 Like in the first game, a lot of effort has been put into making you consider your every move and play the game at a slower pace than other shooters. When enemies are alerted they’ll charge your position while using cover, and their assault rifles will turn you into mincemeat in seconds. Counter-snipers hang around on rooftops, tanks patrol the streets, this is definitely not an easy game or one you can rush, even on the easier difficulties.

Instead, you’ll find yourself crawling from cover to cover and seeking out vantage points from which to snipe at the Russians and Germans. Your bullets abide by physics like bullet drop-off and this effect intensifies the higher you set the difficulty. Your aim also wobbles around a bit unless you hold your breath, which you can’t keep up for very long. The camouflage mechanics from the first game are gone, but enemies are now a bit more reasonable with their perception range and you can even move around while prone without being immediately detected by every Nazi on the map. 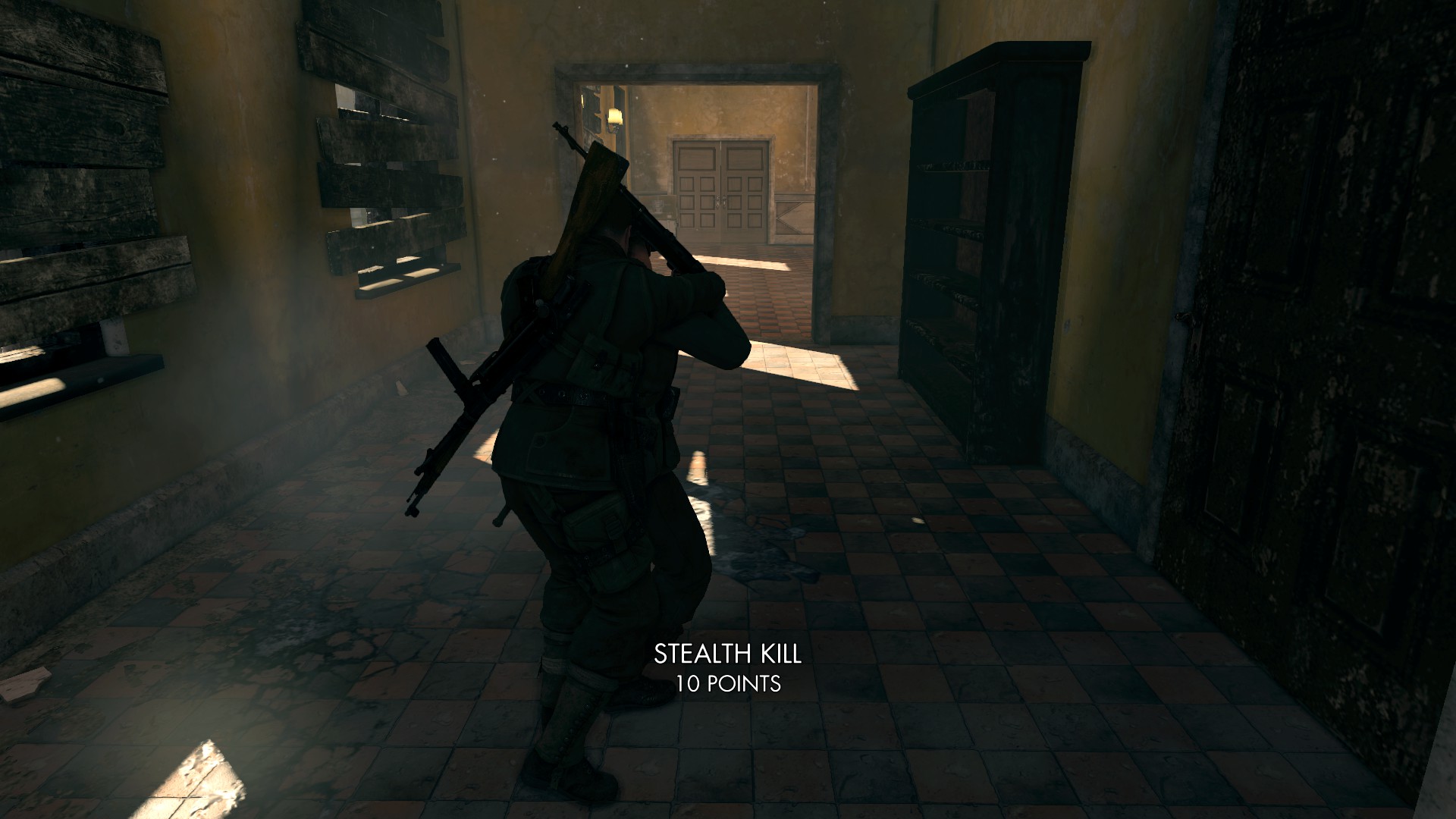 The controls are, similarly, much-improved and more in line with modern shooters. The ice physics for movement are gone and using items is now much easier, which makes it a lot more fun to set up traps to cover your sniper hole. It’s immensely satisfying to be sniping at infantry and suddenly hear an explosion behind you, followed by the score counter letting you know two fools ran into your tripwire grenade.

While every aspect of the game from its movement, to the stealth, to the shooting has been improved, it does have to be said that it feels less adventurous than Sniper Elite and has some cheap design worked into it. Missions tend to be straightforward in their objectives and short, with maps that are much more linear than that of the last game. You rarely have the opportunity to go around a problem or approach it differently, which also means you’ll pretty much end up having to fight each and every enemy.

While it’s fun to snipe at enemies, the original felt very much like a stealth game whereas V2 ropes you into unavoidable combat that also puts you uncomfortably close to enemies. An example is a mission where you need to clear a plaza of enemies with no option to go around it or sneak through; everything has to die. I kill every visible enemy and every sniper, using a good vantage point and timing my shots with nearby noise to mask the sound. Everything is done, I leave the vantage point and attempt to move up through the plaza, when suddenly new enemies literally spawn in. Rooftops empty when I checked them suddenly have snipers on them, and entire squads pop out of obscure corners like clowns emerging from their tiny car.

And when the game forces you into these action segments where alerting enemies is unavoidable, you really are at a major disadvantage. Your pistol and other guns are too inaccurate to stand much of a chance, grenades have a pathetic explosion range, and do you really think you are going to snipe at enemies who get right up in your face? I don’t mind a challenge, it’s just a shame to see the game fail to utilize its best mechanics.

Still, it has to be said that Sniper Elite V2 offers some really good set pieces and a lot of its best moments will be entire unscripted. I remembered one stealth section in an enemy base going completely awry when my carefully-timed sniper shot passed through one enemy and then struck the man behind him right on a grenade, setting of a major explosion and diverting a lot of enemy attention to that part of the base. Troubling, but it did allow me to quickly reroute to a different objective while the AI investigated the explosion. Compared to other shooters out there, V2 feels refreshing and spontaneous.

V2 reuses the setting from its predecessor and earns pretty much the same praise from me because of it: the graphical quality is appropriate for the time in which it was released and stages are plenty atmospheric, though this comes at the cost of the game looking quite drab. 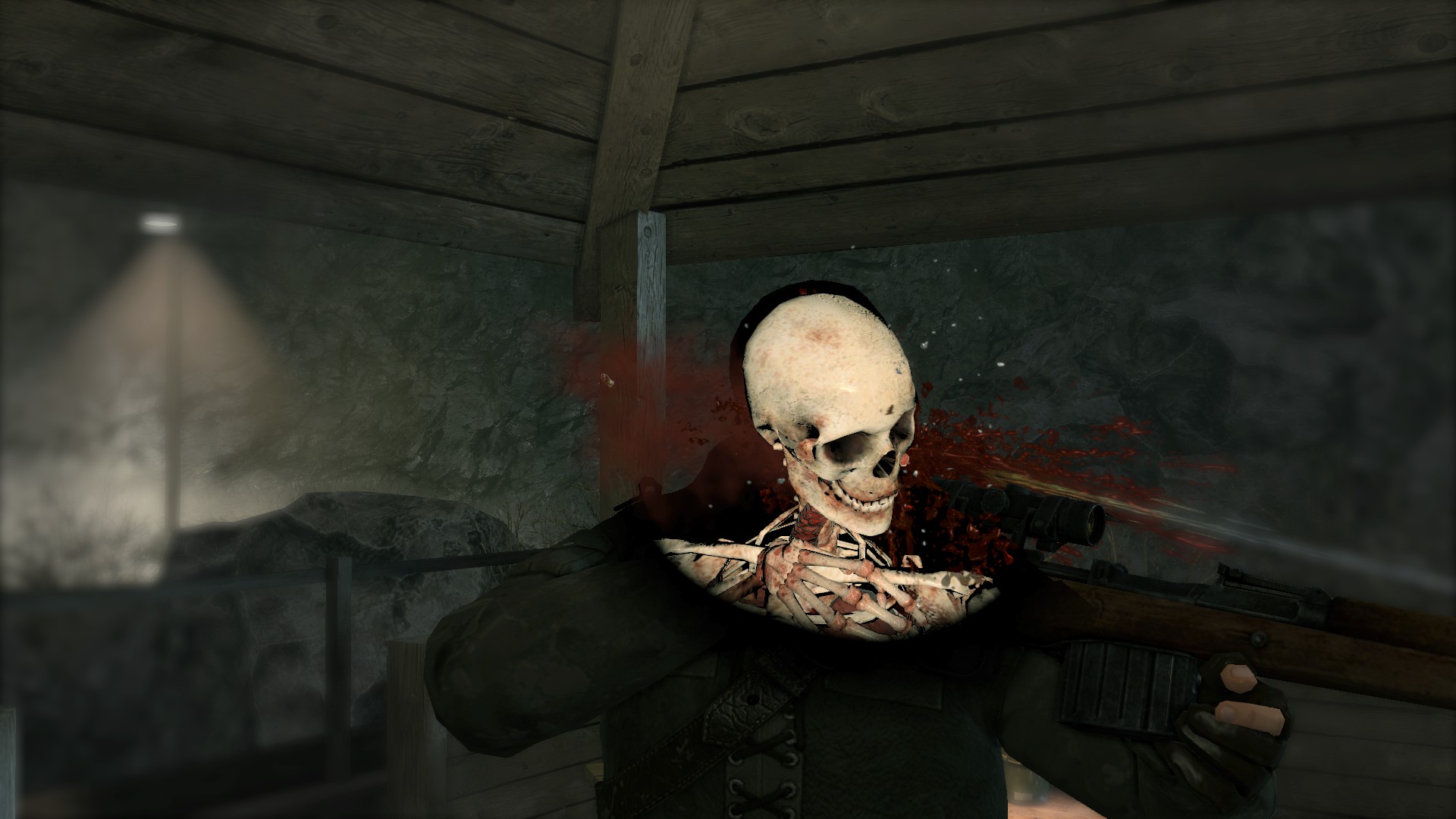 The city streets look fine and textures aren’t bad for 2012, but you do notice that a lot of it gets recycled and the areas do feel rushed. It’s bizarre how many walls you run into that arbitrarily can’t be vaulted over or used as cover, or how many paths look like viable side-paths, only to be blocked off with locked doors.

What is really cool is how much effort was put into the enemies. They constantly communicate with each other in their native languages and coordinate their attacks against you. They also try to rescue wounded friends by dragging them to safety and will stumble when your shots barely miss them, which both look really cool. The bullet cam also returns and has been upgraded to a major feature, with good shots showing how the bullet hits the target and what it does to their bones and internal organs. It’s visceral and you honestly feel a bit guilty, especially when you sometimes hear soldiers discuss their wives and other personal details while you stealth around, only to then later put a bullet in their liver.

No drinking on the job

V2 really wants to push its DLC and shoves a banner in your face every time you start it up advertising it, as well as the game’s sequel. A little obnoxious, but it has to be said that the 4 DLC missions are pretty interesting and especially the mission to assassinate Hitler himself feels like a more satisfying conclusion than that of the actual story. Still, it does set you back 5 euros a piece for missions that are quite short, so it’s best ignored until a good sale comes by. 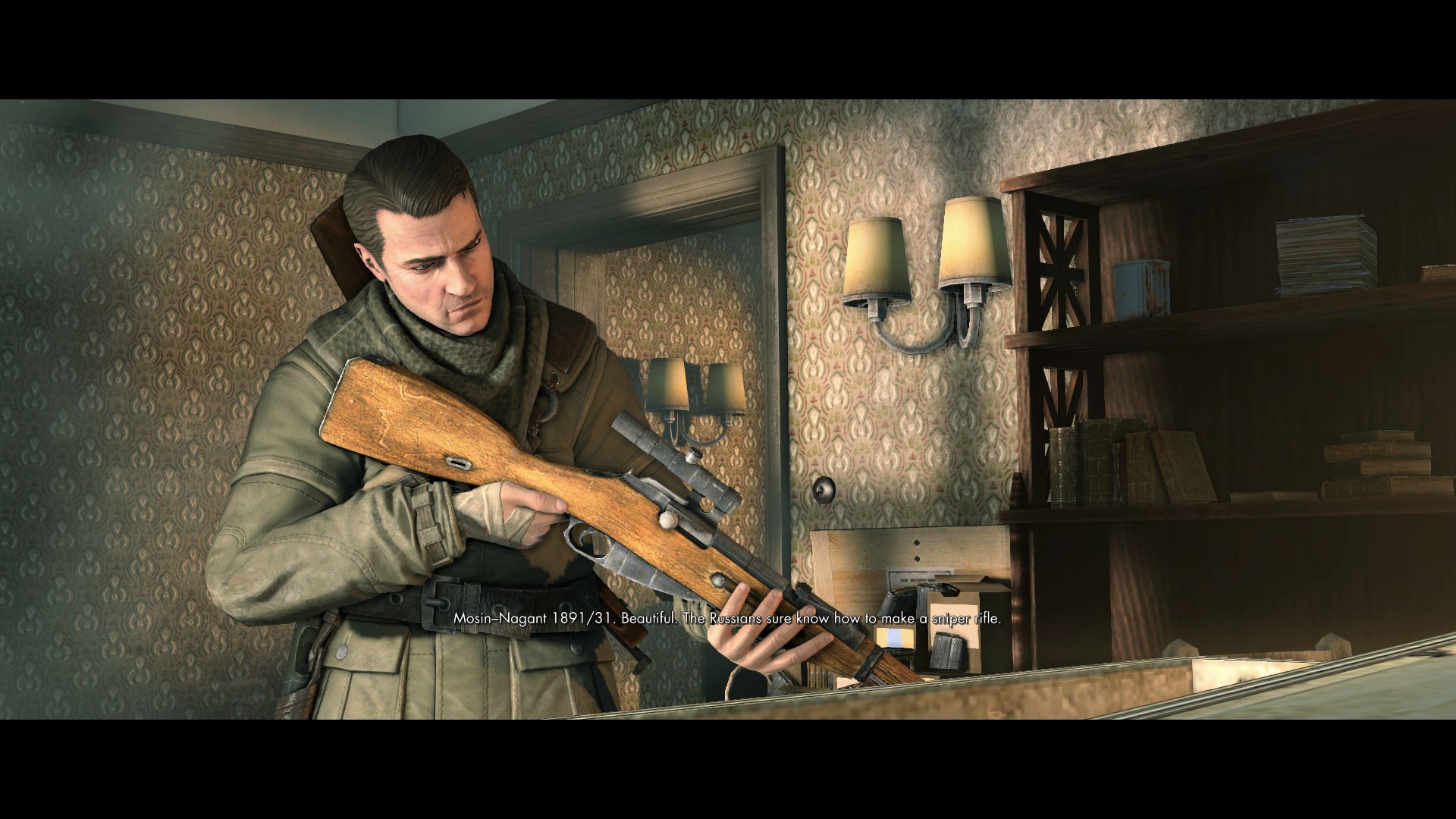 The game also features a bunch of collectibles in the forms of hidden Nazi gold and bottles of liquor hidden throughout the map. It does have a nice twist where the liquor has to be shot with the rifle, so many times you’ll find these bottles tucked away in far-away, out-of-reach locations, which is a nice twist on the typical item hunt. However, these only unlock achievements and don’t actually serve any use, so I just ignored them unless they were right in front of me.

The points system is an interesting beast that harkens back to the highscore rankings on old console games. Your every action awards points, so you can retry missions to try and complete them as a better sniper and beat your old records. The missions aren’t too long and quite replayable, so it’s not absurd and I found it entertaining to go back to the first missions and beat them again now that I was a better player.

Sniper Elite V2 is a shooter that offers something very different from its competitors. With its emphasis on sniping and the gruesome kill cam shots, it’s very satisfying to play well and pull off impressive long-range kills. It could do with better stealth mechanics, but it’s a worthy sequel to the original Sniper Elite and greatly improves on some of its shortcomings. If you can appreciate a more experimental shooter with a higher-than-average difficulty, then this might be the game for you.