I haven’t given up. Sniper Elite 3 may have been an utter disappointment, but I already had the fourth entry lying around and wasn’t about to let it go unplayed. At the very least, I could see how the third game innovated the series and I was curious to see if, with a little more polish, I could come around to liking the game once again. Since this is not another rant, that means I could at least finish the game this time.

The land of pasta

Following the events of the last game, OSS operative Karl Fairburne now finds himself landing on the shores of fascist Italy. The axis forces are working on a new type of missile technology that could devastate the allied fleets, so Karl has to go in and destroy them, alongside any of the smart guys who are developing these new weapons.

While operating from the heartland of the enemy, Karl only has himself and his peculiar strategist Jack Weaver to rely upon. His mission will also force him to cooperate with the local partisans and even the mafia, but both are reluctant to trust the allies and will need some favors before they are willing to part with their much-needed resources.

As a war story, Sniper Elite 4 works well enough. It’s interesting to have a game set in Italy circa 1943 and Karl’s objectives feel realistic within that context. I will say that characterization is a bit weak and stereotypical, especially when you start cooperating with the mafia and you get characters that act like they should be in a parody on mafia movies. It really takes me out of the experience, especially when it does have some interesting side-characters that go underdeveloped.

The ultimate villain is also a weak link, who literally pops out of nowhere for the final mission and is dealt with in the span of five minutes.

The switch to a more open-world format was a hassle for me in Sniper Elite 3 and I criticized the area-design riddled with bottle-necks, the overly-aggressive enemy AI, and how the game discouraged use of the sniper rifle in favor of basic stealth shenanigans. On the surface, not much has changed to the base mechanics, but improvement is seen in the finer details. 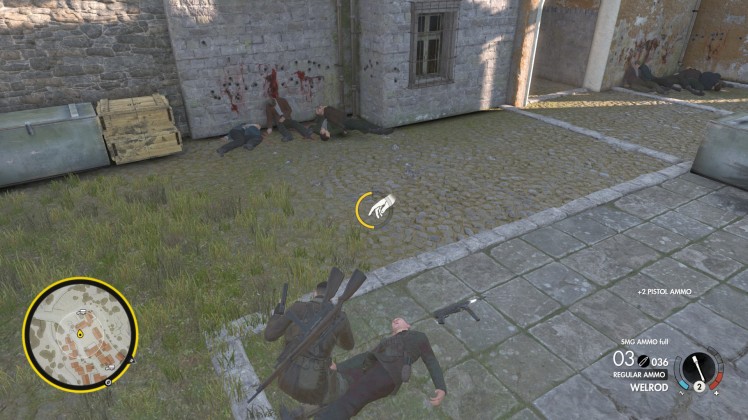 As Karl, you are once again dropped into open-ended areas with a list of optional and mandatory objectives, like disabling AA guns, retrieving vital intel, assassinating key targets, or placing a flare to mark a bombing target. Though once focussed on the sniper above all else, the game now prefers a more wide-ranging interpretation of stealth-action gameplay. You do have a sniper and it feels satisfying to use, but you need the right circumstances to make it work.

Aiming the rifle, holding your breath for increased accuracy, and then finally pulling the trigger and watching a Nazi 2 kilometers away drop dead is kick ass stuff, but all his Nazi buddies are not going to appreciate it much. A single shot will put everybody in a radius around you on alert and causes them to start searching for you. Another shot at that point will make absolutely sure that they know your location and makes them aggressive, at which point it becomes a hellish ordeal to still come out alive. Enemies with assault weapons will murder you in seconds, counter-snipers can absolutely ruin your day, and you’ll be dodging grenades alongside regular gunfire. Enemies will even call in airstrikes to flush you out. 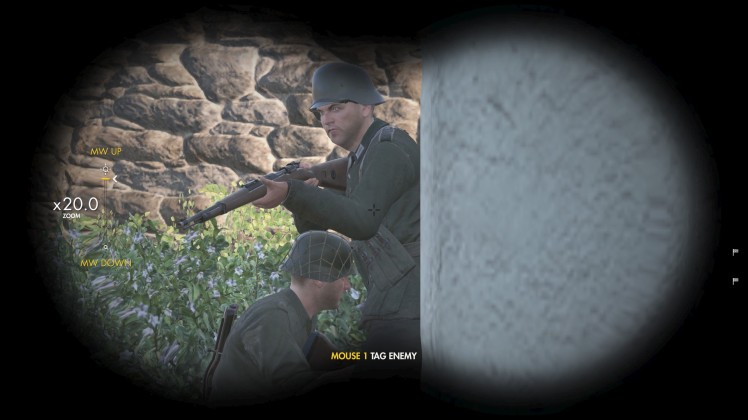 The sniper is great fun and I use it a lot, but it’d be more apt to call the game Pistol Elite. Sneaking around and taking out enemies with silenced headshots, causing noises to divert patrols and pick off individual soldiers, that kind of stuff is a lot more prevalent. The stealth gameplay is improved over the third title, most prominently in how enemies are slower to spot you. Seeing you will make them curious and they will investigate, but it takes a few seconds for them to become alerted, and then even more before they get aggressive. That is until you run up and perform an instant-kill takedown move, in which case they’ll be very aggressive in the brief moment before their neck is broken.

The structure of the missions forms a great benefit to these mechanics. Maps are surprisingly open to explorations and I’d often find myself dropping into a mission and just scanning the map for 5 minutes to decide where to even go first. Deciding on an efficient path to follow is all well and good, but when I messed up stealth or had to deal with a timed objective, I often had to take chances and figure out new routes to escape and still get to my objectives. Sometimes I’d forego an area entirely after bodging an approach and go so far around that I’d eventually get back there from the opposite end, with guards still trying to search for me and keeping an eye on where I came from.

With that said, the AI can also be a bit too simplistic. I could often just sit in some tall grass and defeat an entire camp of enemies by just spamming takedown moves or using silenced headshots with the pistol. It’s too easy to cheese your way out of a tight situation, though that is compensated for by how quickly you’ll die if you ever do get found out and can’t run away. The game also throws in curve-balls by sometimes putting you against tanks or other vehicles, which can make for scenarios that are incidentally hilarious and very, very frantic.

Whether you play the game as a careful, deliberating elite or as a murdering Johnny English, Sniper Elite 4 is a good time. The amalgamation of annoyances I felt with Sniper Elite 3 has been untangled and largely sorted-out, leaving a game that is just all-around quite fine. Each mission takes about an hour to complete because of how much there is to do, but each one ends up filled with memorable moments that feel organic, as a result of my actions rather than pre-scripted setpieces. I’d even be willing to admit that it’s a compelling alternative to the Sniper Elite games of old.

The switch from the bombed-out ruins of Berlin to the sandy villages of wartime Africa left me particularly sour, so I was happy that we returned to Europe for this outing, where the land is more varied and the sun doesn’t fill the screen with horrible bloom effects. Italy makes for a great setting with a lot of levels being set in environments filled with nature, beautiful buildings, seaside cities, and ruins of ancient times. The game is varied enough to keep stages interesting and several locations ended up being genuinely interesting, like the very vertical design of Bitanti Village.

If I did have to complain, it’d be that there is still a focus on mostly Germans. I didn’t see many Italian soldiers or heard much Italian banter, aside from comedy Italian as voiced by regular Americans. It would have been nice to see a different side of the war entirely for once, though it’s entirely possible that I missed some of the Italian influences during gameplay.

Why would you do that Karl?

The game once again adopts an experience system that awards you with unlockable equipment as you complete objectives, perform skillful play, and collect side-stuff. I didn’t get much use out of it because the default loadout was fine by me and you can always scavenge up other equipment during missions, so I mostly ignored it. Side-objectives are fun enough to complete anyway, so if you do have a preference for certain guns, then you can at least invest in having them on you anytime you start a mission. 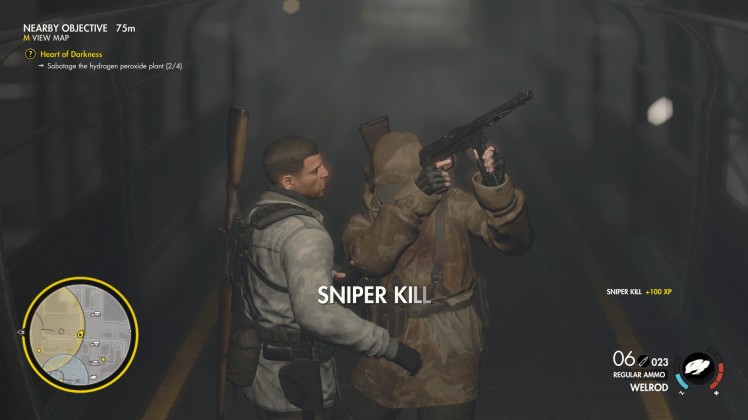 Weapons can also be further improved by achieving special tasks with them, but I didn’t get any of these because the criteria tend to be absurd and difficult to even track, like using the short-range welrod to kill like 30 enemies from well beyond its effective range.

While exploring the open-ended stages, players can also be on the lookout for collectibles that award more experience and contain other benefits. Most prominent of these are the letters, which are final goodbyes to the families of soldiers you have killed and looted. These are a dubious addition, because I think it’s a good thing that individual soldiers are framed in a sympathetic light, to counter the player’s expectation that they are a hivemind enemy to be butchered. However, this also implies that Karl is finding these letters and just taking them with him, depriving the widows, parents, and children addressed in them of their loved one’s farewell to them.

Still, experience also makes you level up and that allows you to unlock permanent perks, so… sorry, I’ll be taking those heartfelt letters if you don’t mind.

Sniper Elite 4 was on risky ground for me after how thoroughly the third game disappointed me. I went into the fourth game expecting to be lukewarm at best, so it was a pleasant surprise when I could actually get behind the game’s design. It’s a weird game, that won’t immediately appeal to fans of modern shooters, but if you can find a place in your heart for its weird niche of stealth-action gameplay, then it’s a surprisingly good time.