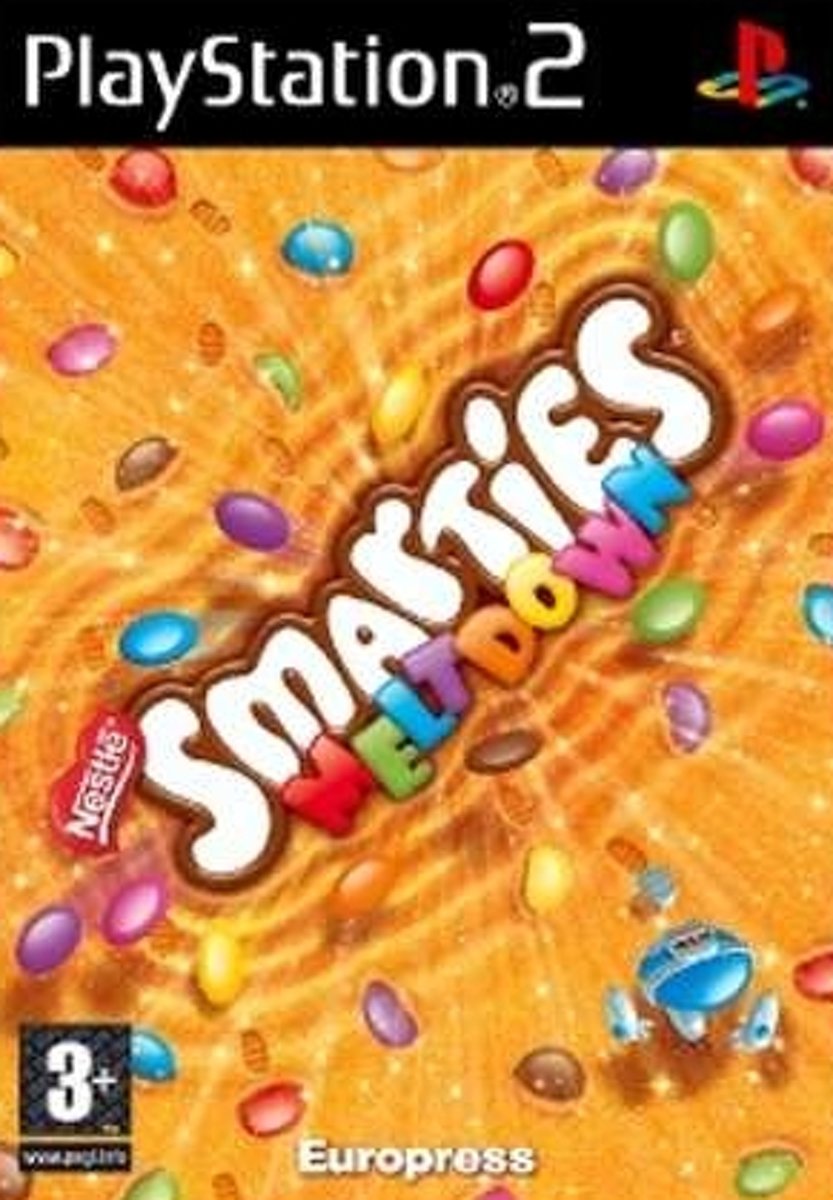 Only days after Stian and I discussed doing Capitalism Month, I visited a game store in Utrecht and found this curious title among its PS2 library. Smarties Meltdown seemed like it would be some shovelware, mini-game collection, so imagine my surprise when the back of the box promised a full-fledged 3D adventure game with combat, platforming, and a storyline. All that for just 99 cents.

The evil Dr. Soursweet has tracked down the location of Nestle’s satellite factory that orbits the earth and which produces all the smarties. Hoping to corner the market with his own candy, Soursweet deploys his army of Stroopers and launches an all-out assault. A lone blue smartie escapes down a tube and discovers the exosuit, a power armor that permits him to fight back against the invaders. 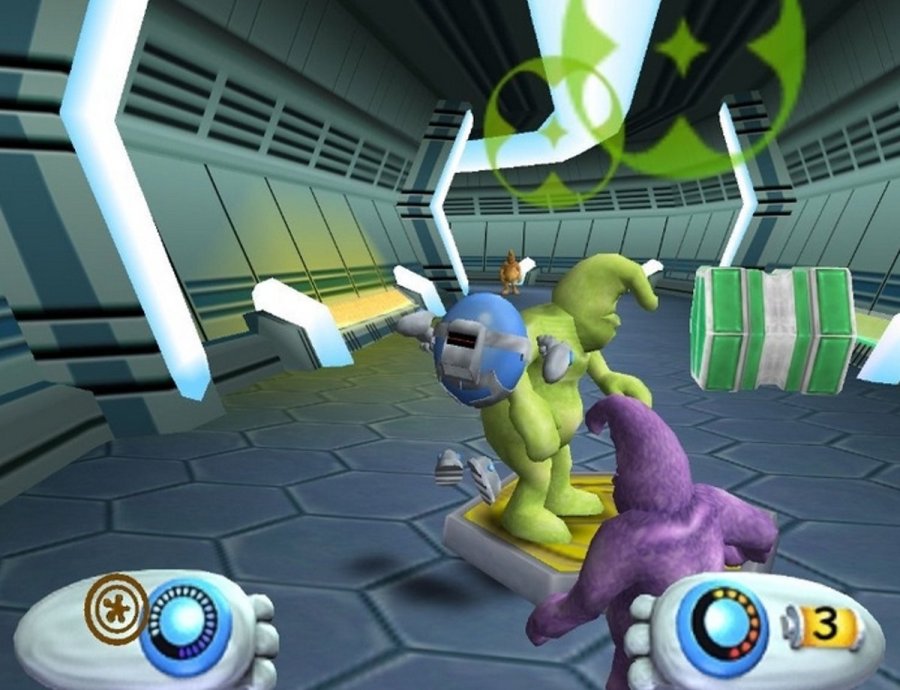 The story is nothing to write home about and even ends with only 2 lines of dialogue before unceremoniously booting you back to the main menu. It doesn’t develop the characters in any way and even our heroic smartie, “Big Blue”, is only vaguely characterized through a handful of repeating quips. A bit of a waste, considering he was voiced by TV personality Dave Benson Phillips.

I am not sure what epic tale I would imagine a licensed game on smarties to have, but since they went through the effort to create Dr. Soursweet and the Stroopers, it would have been nice to see some effort put into their personalities, or at least give Big Blue some more lines.

Smarties Meltdown is a remarkably-ambitious 3D action platformer. Big Blue, equipped with his newfound exosuit, must fight and platform his way around each wing of the factory to reclaim control and drive out the invaders. You access these levels from a central hub area and each one concludes with a unique boss fight.

Big Blue has a simple two-hit combo that stunlocks an enemy and acquires new powers as the game progresses. You’ll gain boots to increase your speed, various projectiles, and a shield to temporarily negate damage, and all of these draw from a shared energy meter that can be replenished by beating foes or breaking some containers. Combat is not too complex since you just hammer on foes until they fall over, but when you are rushed by several stroopers at once or have to deal with projectile attacks, it does liven up a bit and makes it worth using the gadgets.

Stages feature a mix of combat, platforming, and light puzzles. Some segments can feel like gauntlets of enemies whereas others are more about exploring and finding your way forward. You’ll be looking around for switches to activate bridges or platforming around a perilous conveyer belt with crushers that slam down to flatten you even more, it’s a good time and the game constantly introduces new hazards. It’s honestly surprising how many mechanics the game has and how competently they are spread out across the adventure to keep you engaged. This far surpasses my standards for licensed games, I tell you.

The true goal of every level is to collect the smarties. The doors at the end of each segment will remain locked unless you have a minimum amount of them and it does have to be said that these requirements are strict. Even putting in my best effort, I frequently ended up having only around 5 smarties extra at the end, which makes me concerned how a kid with less patience could manage. Smarties themselves aren’t hard to find, though they love to tuck them away in little corners or right behind scenery where you won’t immediately see them from the direction you come from.

While I did enjoy several of them, the tighter platforming stages are a cause of some frustration. Big Blue feels floaty to control and this is made worse by a camera that flails around sluggishly. When navigating moving obstacles or hazards that you need to timely dodge, it can be especially difficult to then also collect smarties. There was one level where you need to navigate tight tunnels with rings that move through them as hazards. When entering a side-passage to collect a smartie, it is impossible to keep the ring and the collectible in sight at the same time, so I’d either stumble around hoping to get the smartie or risk getting blindsided by the ring.

The game’s design is also questionable in places. For example, only a few times was the placement of temporary power-ups actually useful. Strength power-ups often lie at the end of combat encounters or boosts to your speed and the height of your jumps appear right as you enter a difficult platforming segment. Worse are the frequent glitches that have you clip through enemies and scenery or even kill you out of nowhere. Button inputs or hits against enemies also fail to register at times, especially against foes that you need to hit at specific weak points.

That the game has issues is not surprising and, to be honest, very forgivable. Sure, sometimes an air vent messes up and doesn’t launch you in the air or an entire puzzle is skipped with one easy long-jump, but the variety each level introduces and the fun level-design show that the developer was determined to make as a good game as possible.

The game’s level design is a mixture of basic sci-fi environments spruced up with colorful decor. I was disappointed when I first found myself traversing grey, steel corridors, but the cartoon art-style makes these quite tolerable and everything from packing crates to the enemies use bright colors. They even got some giant smarties packages to climb on, but that was probably a given considering the license.

The game’s soundscape is mostly forgettable and just serves to have some noise play while you play the game. Nothing stood out as obnoxious, but I find myself completely unable to recount even a single bit of music from the game. What you will become very familiar with are the 10 or so voice lines for Big Blue and the enemies. It’s not uncommon to hear the same line several times in a row and the delivery is all-around weak. There is also no option for subtitles, which made the intro cutscene difficult to follow due to poor audio mixing.

On a purely technical level, the score you see below is representative of how Smarties Meltdown plays. In fact, I am probably more generous towards it than it actually deserves. The game is full of glitches and wonky design, it’s overly janky and it has the most effortless ending I have ever seen in a video game, but I had a good time playing it. Smarties Meltdown should have been cheap shovelware judging by the cover, only to reveal itself to be quite alright. For a 3-hour PS2 game that costs less than an actual pack of smarties, I can recommend it as a curiosity.