I still look back fondly on my time writing for Rely on Horror, but it was not a job without its drawbacks. As the resident expert on indie games, it was often difficult to convince dedicated fans of big horror licenses to also get excited for the kind of obscure crap that I am into. News about the likes of Our Darker Purpose just doesn’t attract the numbers or hype that anything Resident Evil-related will generate, so it was tough to keep reporting on these games and get them the spotlight they deserve.

There are quite some games I was still covering around the time that I left, which did leave me feeling guilty. One of these was The Miskatonic, a curious, Lovecraftian visual novel, that I ran into again by complete chance whilst browsing Steam. Delighted to see it finally released, I opted to get it right away and give it the review it never got on my old site.

The story is set in a world where all Lovecraftian horror turned out to be true and the entire world has become affected by various shades of madness. All of England has turned to cannibalism, witchcraft runs rampant, people and monsters live side-by-side, it’s completely derailed. In this world of insanity and eldritch abominations, The Miskatonic institute serves as a gathering point for the world’s wisest and those still relatively sane. 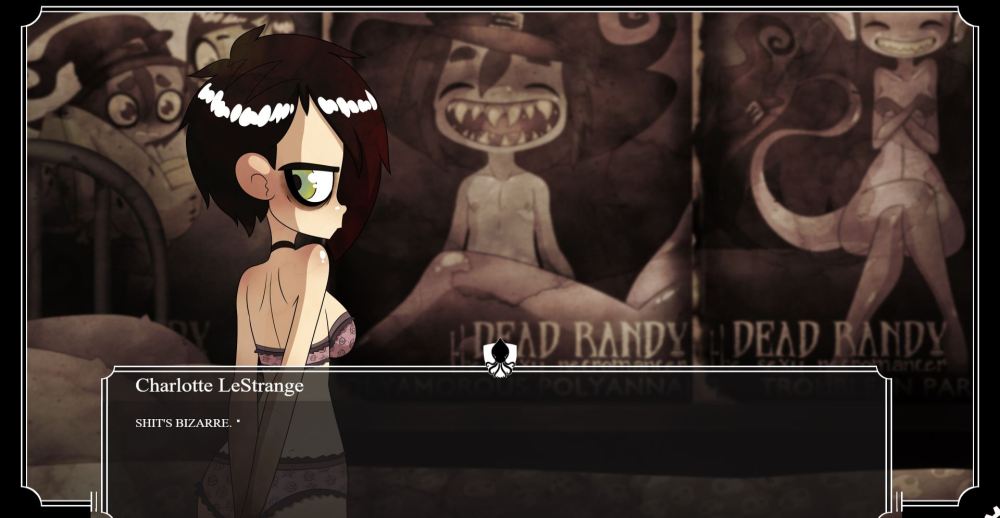 The player takes on the role of Charlotte LeStrange, an American witch who has taken on the dangerous job of working security for the institute. Hardly a day goes by without a massacre or entire department disappearing into another dimension, so there is plenty for her to do.

After being guided around the campus grounds and getting introduced to the faculty, Charlotte’s job takes a turn for the mysterious when she decides to nose around an abandoned outpost and discovers a troubling secret about the Miskatonic, which implies it may not be as ethical or helpful as it appears to be. Charlotte starts her own little investigation into this matter, but who can be trusted when the staff includes a cannibal lunch lady, shamans who vivisect various horrors, and a woman who transformed into a Shoggoth because she spilled coffee on the Necronomicon. 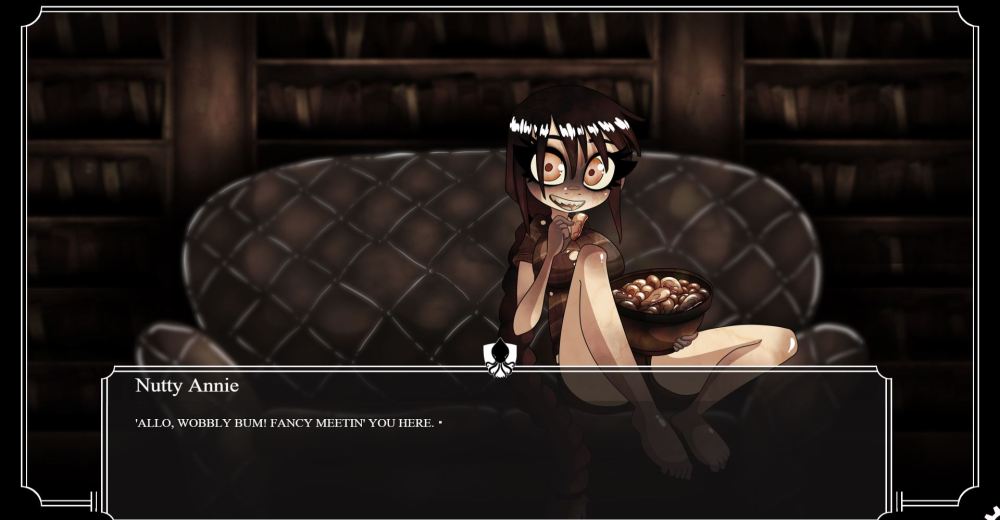 The tone of The Miskatonic leans towards the comedic, but it drew me in with its interesting lore and world-building. Constant references to Dunwich and Innsmouth run rampant and are a bit cheap, but these do go accompanied by in-depth lore that had a lot of effort and dedication put into it. I took a liking to getting into all the optional conversations with staff and students, just to hear what is going on in this world and what its people are like. Apparently, Deep Ones have some interesting ideas about beauty pageants.

The game is, primarily, a visual novel. Hence, reading is more or less what you’ll be doing most of the time, so it’s good that The Miskatonic‘s dialogue is this interesting. It does have its padding, like there is a bit where storyline progression is halted until you have picked up all 5 volumes of a comic book series, read the descriptions, and gotten Charlotte’s reactions to them. Or a bit where you listen in on some gamers discussing their latest strats, which also runs on for too long. I’d say about 50% of the jokes I felt were mediocre, 10% was cringe or overlong, 30% was amusing, and 10% was actually damn funny.

The storyline is easy to follow and I did take a liking to the more important characters, like the cannibal Annie who “jokes” about wanting to eat Charlotte or the little shadow creature Lizzie, who has some intriguing lore behind her. Many times a chapter of the story will just have you patrol the school grounds and head to all the important locations for plot-important interactions. While you have free range to go where you please, it’s obvious that you are being railroaded through the storyline and it doesn’t feature any choices to alter the narrative. This freedom really just exists so you can chat with side-characters if you want. 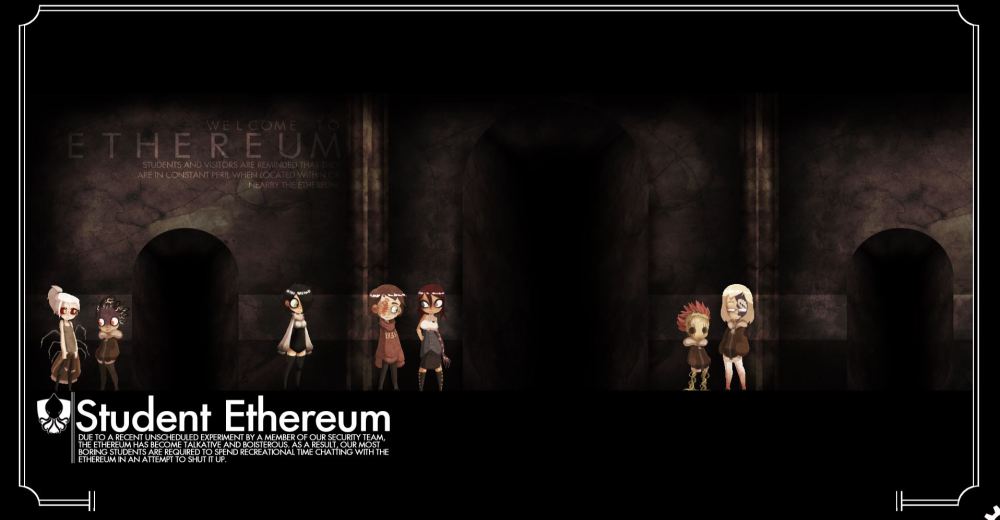 Another major reason that draws me to The Miskatonic is its artstyle, which I’d most accurately describe as a westernized take on moe, given a cosmic horror overhaul. Characters are drawn in a cutesy style with large, expressive eyes, but… you know… tentacles… and slime… and eyes… Cool stuff.

Now, to conclude, I am going to be a bit mean and declare all of the above to be void. For all the game’s merits, what The Miskatonic delivers in terms of story scope feels like just the prologue to a larger story, with the game ending on the weakest of cliffhangers. 4 DLC stories were announced and never materialized. After trading cards were added, the game turned silent. No Steam page announcements, no Kickstarter updates, and Jack’s twitter has erased all tweets relating to the game in favor of hyping up a new project.

For whatever reason, he has lost most interesting in The Miskatonic and continuing to build on its ambitious groundwork. Just like his webcomics have largely vanished, so too does it seem Jack is harvesting his favorite bits and pieces from The Miskatonic and throwing it into his new project.

I did like The Miskatonic a lot, but the story is a whole bunch of setup and lore, most of which goes unused by the end. The Dunwichers only make one appearance, the witch covens are never seen, Charlotte steals a big weapon that is never used again, Lizzy and Billy don’t get to do anything, and the same goes for Marie and her boyfriend. A whole bunch of likable characters and plot devices introduced and then left hanging. On top of that, looking back on my old coverage of the game reveals gutted content.

The game was originally intended to offer more free range of movement and progression dictated by puzzles. The HUB world would change as you progressed the game and it seemed to imply there would be some action elements. Charlotte was originally depicted as a woman who didn’t shrug at a little violence, repeatedly displayed covered in blood and wielding her shotgun. This can still be seen in her role as a security guard, but doesn’t connect with her rewritten personality. The stretch goal bonus story “Family Reunion” was never made either.

This all happened, even though the game shattered its Kickstarter goal and made several thousands of dollars extra. Not only was an ambitious survival horror game cut down to a 2-hour visual novel, it even does that poorly and offers shockingly few options to increase readability, speed, or other basic game settings.

An engaging story, a deeply-intriguing world, stuck to a game that was cut down beyond recognition and abandoned by its creator shortly thereafter. It’s a shame to see a game I was so hyped about in this state and Kickstarter backers left in such distress. A little bit of communication would have gone a long way, but hopefully, this will serve as a lesson for those who find themselves interested in Jack’s newer projects.