This makes you emotional, doesn’t it? Catherine was the very first review I posted on this site and, since then, it has become a favorite game of mine that I like to replay from time to time. It had entirely escaped me that a remake was released, until I spotted it in a games store while on vacation. To start off this month all about romantic games, what title would be a better fit than the remake of the game that started off this entire website?

To clarify, however, I will not be re-reviewing the whole of Catherine. While it is an old review, I stand by my score and opinions on the game. This will merely be a critique on what Catherine: Full Body adds to the game and where it fell short.

The game once again has us take control of Vincent Brooks, a down-on-his-luck programmer who accidentally cheats on his girlfriend Katherine. After a night of drinking with his pals, he wakes up in his apartment besides a young, lustful seductress called Catherine, notice the C in the name, and he is unable to rebuke her advances. Trapped between two relationships, he begins experiencing nightmares in which he is transformed into a sheep and forced to climb a tower of blocks alongside other sheep-people who have been unfaithful.

The core of the gameplay still lies in the nightmare sequences where you ascend the tower by pushing blocks around, with special blocks adding new challenges and possibilities as the game goes on. Full Body adds new stages for both the main story, as well as for all the extra modes. It also comes with new difficulty modes and safety nets, like allowing players to let a level autoplay or removing certain hazards. The new “remix” mode takes this even further and offers a completely revamped set of puzzles and mechanics, which adds a bunch of replay value to the game.

Additionally, the controls and camera have been tweaked, which were major sticking points for players in the original release. This comes on top of audio and visual improvements, which were to be expected for a remaster like this.

Where the game has failed to make improvements is in the Stray Sheep segments between the nightmares. These are meant to be relaxing breaks where players socialize with the cast of characters, learn more about their friends, and make preparations for the night. However, the NPCs work on tight schedules and failing to utilize these can mean some end up dying throughout the story. With the addition of new characters, there is now more than ever to manage in the Stray Sheep, which makes these parts extra stressful and left me constantly wondering if I had already messed up something without realizing it.

While replaying the game gave me a newfound appreciation for its strong dialogue and diverse cast of characters, it also amplified my frustrations with the Stray Sheep portion. You are trying to get things done here, but must suffer a constant barrage of text messages, phone calls, and the bell noise signaling that someone entered or left the bar. Especially towards the end of the now-extended storyline, I felt myself wanting to get these over with as soon as possible.

Where I find the game lacking is in its story. Catherine was an interesting romantic drama about a man being torn between two women: his girlfriend who wants him to commit to their relationship and live the happy, orderly life of a wife & husband, and a seductress egging him on to be more free-spirited and open. Full Body still offers this core storyline, but it ends up overshadowed by the addition of a third character called Qatherine. Yes, they took that joke from Zero Punctuation and made it an actual thing here. Fortunately, our new cast member goes by the name “Rin” for short.

Rin is a mysterious new girl who ends up running into Vincent while being chased down by a stalker. Vincent manages to escape with her and then takes her to The Stray Sheep, where she is employed as a pianist and earns money to rent the apartment next to his. Rin has amnesia and nobody appears to be looking for someone matching her description. Until her memories return, she has nowhere else to go and nobody else to turn to. 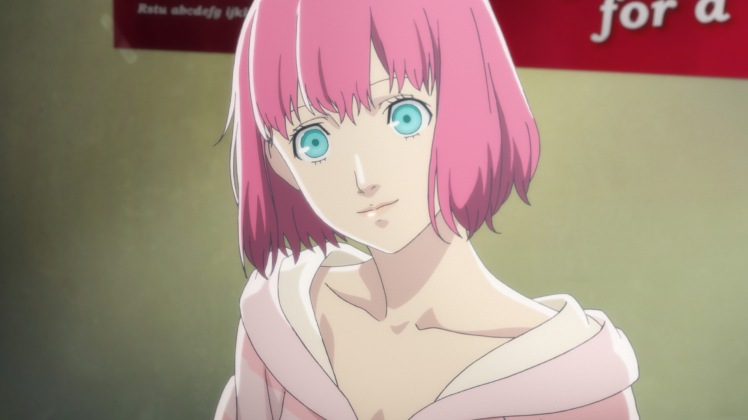 The friendship between these two blossoms as Vincent begins taking care of Rin and the piano music becomes an increasingly-popular attraction at the bar. However, Rin then also begins appearing in the nightmares, helping boost the morale of the sheep and aiding Vincent by halting the collapse of the tower. Neither the Sheep nor the ominous voices controlling the nightmare seem to understand who Rin is, lending some mystery to the story.

However, this is a mystery that distracts from the existing dynamic between Catherine and Katherine. A lot of cutscenes were added that are just about Rin and existing ones have been reworked to include her as well. It’s presented as a third path that breaks away from the Freedom vs Order meter that showed which *atherine players favored in the original, but Rin’s story is so present and so much more involved that it’s clear that they want you to explore it. If you go for a classic run, all of Rin’s cutscenes are just a load of deadweight that slow down the story, whereas the existing scenes don’t feel as misplaced when you are following Rin’s route instead.

While I was initially interested in Rin’s story and felt it was going in a bold direction, her route soon also deviates from the Christian themes of the plot and enters bizarre territory. Without wishing to spoil, there are 3 endings for the Rin route, and a new one each for the Catherine and Katherine paths. All of these feel like the Joke endings to a visual novel, with especially the True ending for Rin being shockingly unfunny and a total disappointment. While the game does sprinkle some hints throughout that the story might get unconventional, it’s a shame that there is no option to have a normal relationship with Rin, after everything leading up to it was setting up for a daring new step forward in romantic storytelling within video games.

Atlus had an opportunity to do something truly interesting here, yet chose to squander that chance by making the intended (good) message overly extreme and comedic, in a way that most anybody playing the game will likely find cringe-worthy, if not outright offensive.

The game also introduces two new sheep to meet in the nightmare, but neglects to include these in the bar. You only meet them after completing certain stages, which leaves their characterization limited. You only get to meet them in person at the very end if you successfully navigated their dialogue trees, which I feel is unexciting.

Whether you should or shouldn’t get Catherine is a topic I find difficult to approach. Gameplay-wise, it is definitely the perfect realization of what Catherine was meant to be. It’s bursting with content and options, which should help people who found the original unapproachable, as well as those who already played it to death. However, I don’t buy into the creator’s statement that, story-wise, this was the intended form Catherine would take. The Rin plot is so detached from the drama that made the original game appealing that I can’t imagine it was originally planned.

If you are a returning fan, then the added content and new story directions can revitalize the game for you. However, those new to the series I would sooner direct towards “Catherine Classic” available now on Steam. It tells the story of Vincent and his two lovers without distraction, after which you can judge for yourself if it’s a game you’d like to replay with a bunch more content added in.