Yeah, I know. This really is a prestigious website, ain’t it?

A word of caution ahead of the review: this game is wildly inappropriate and is a very comedic take on prostitution. Some of the mechanics and situations I describe below may be perceived as insensitive or crude, but are not intended to insult anybody. This is merely a critique of the game as I experienced it. 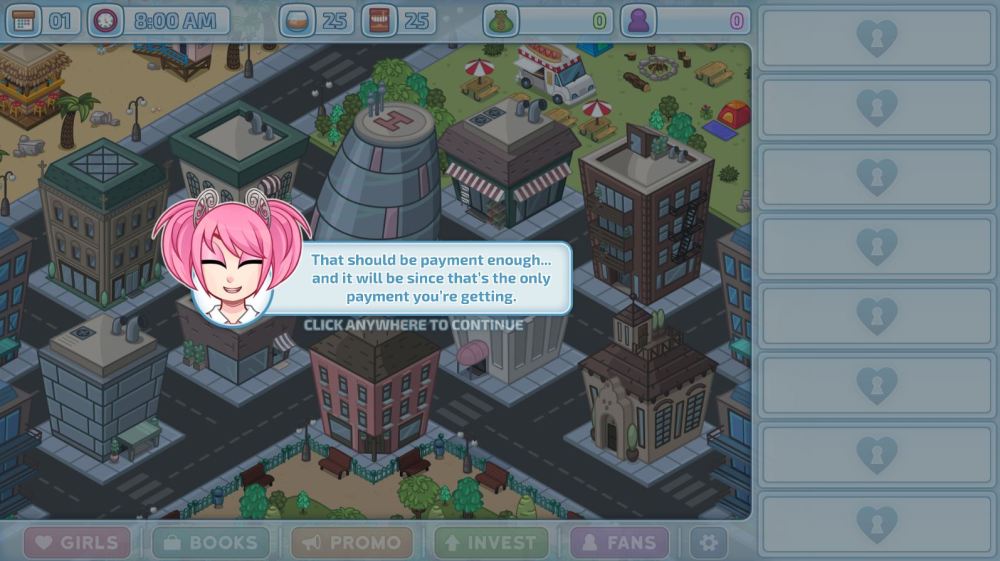 The more fans you have, the more the girls earn doing camwork. However, there is a catch here. Fans are only attracted to specific fetishes and each girl starts off satisfying only 2. You can unlock additional ones by buying items at the store, like cat ears to please the furry demographic, but this also means you are spreading the preferences of your fans when doing photoshoots and may have to invest in ad campaigns to boost the girls’ income. Do you focus on appealing to a select few fans or diversify your offering? 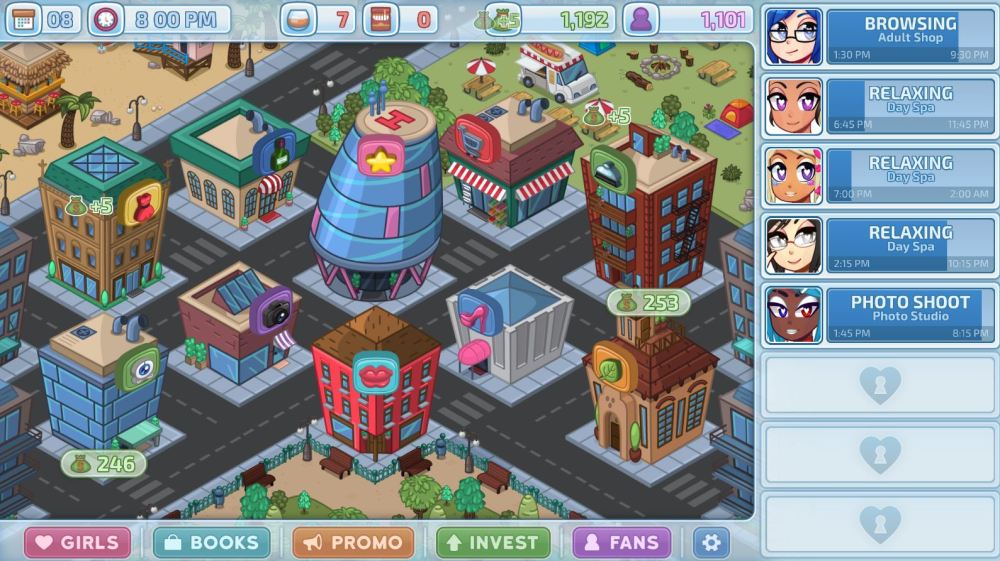 The girls are also not working for free. You have to stay on top of their payroll and lose the game if you end any day while in debt. While they will make more money than they cost if you keep them camming, there are so many other things that need doing. Training the girls is also nice, it increases how many fans or how much money they generate per action, but they will also demand a pay increase when they level up. These girls know no mercy.

You also have to watch their stress meter which goes up over time and as they perform jobs, and which increases even further if they can’t have a drink or cigarette when they need one. You guessed it, that’s another job you need to put girls on. In my first run, I ended up using Tiffany exclusively as an errand girl, who stocked up on alcohol and cigarettes, got new toys and items at the warehouse, and would recruit new girls whenever there was an opening I needed to fill. Characters that reach dangerous levels of stress will start refusing work and must be given a day off at the spa to regain their calm.

The riskiest part of the game is the hotel, where you can earn a full cam-session payout in a fraction of the time. However, unless you can manage to snag a condom at the store, it has a chance of inflicting an STD on the girl, which can even be incurable. On my first run, I played this very safe and only ran into one, curable STD. On my second one, I ended up with two girls forever banished to the sideline because they had unworkable diseases with no cure available at all.  Even the curable ones will have major side-effects that will complicate the game for you until treatment (again bought at the store) is completed a few days later. Days that you don’t want to be wasting.

Now, it has to be said that Í’d make a terrible employer in any type of business, but HunieCam made me feel like a capitalist monster. I was constantly pushing the girls to 100% stress levels before I noticed they needed a break and was keeping them high on coke, which doubles the speed at which they do every job that day. I got girls as young as 18 depressed and sick for the rest of their lives, so I had to replace and neglect them, usually meaning their replacement was going to be facing the same issue not long after. I know it’s a digital and fake, but… I might be a terrible person. 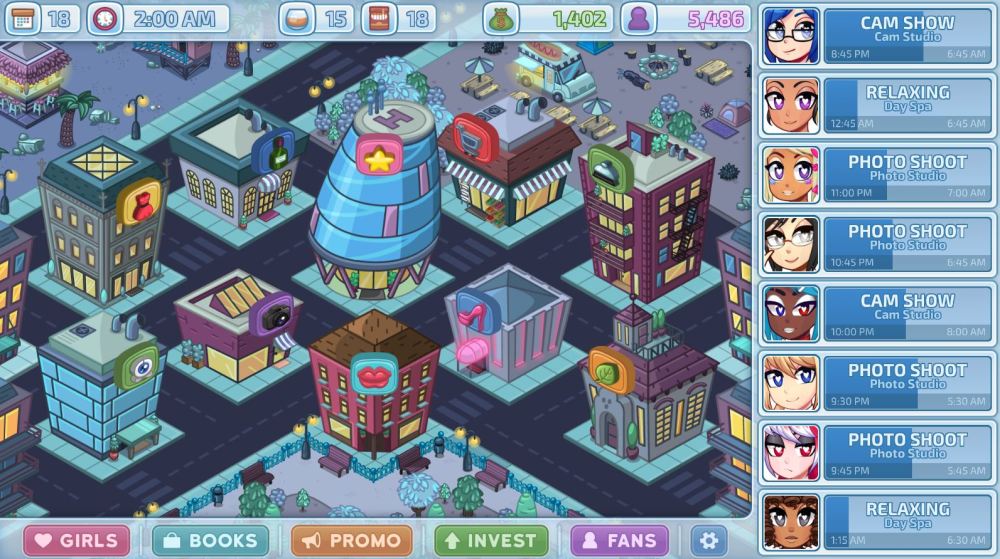 The ultimate goal of HunieCam is to have as many fans as possible by the end of the 21st day, which is kind of tough. Earning money is fun and you can invest it into automating the clicker gameplay and increasing future payouts, but it’s fans that you need to gather, and those only pay the bills in an indirect way. And while you are working hard on getting fans, the girls are improving and their wages go up, which means you are paying more. Finding a good balance between earning money and growing the fanbase is the main objective here. It’s satisfying to pull off, but this does mean that new games have a very slow start where you’ll frequently dip down into debt and will be yearning for when you can finally build up a decent pace.

You can keep playing after the 21st day, but unlike HuniePop, there is not much to it after that besides recruiting all the girls if you really want. While each one has dialogue lines when performing actions and comes with a little paragraph of text, they are interchangeable and there is no storyline to follow with them. Even Kyu is mostly absent after the tutorial and only briefly appears for the ending to congratulate you. 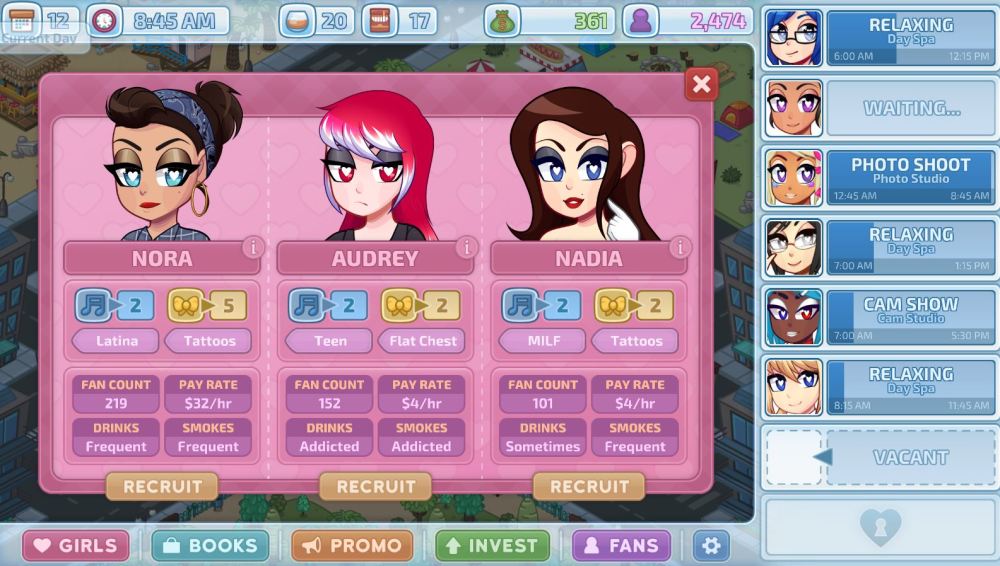 And while I like the cute character designs and the reimagined takes on characters from HuniePop, there are no cinematics in this game unless you count the loading screens, and also no full nudity. After each run of 21 days, all you get are some coins that can be spent on getting the girls new costumes and hairstyles for future runs, which doesn’t give much incentive to replay the game much.

A shame, because it’s an interesting take on a short management game. The simple loop of getting more fans to get more money is nicely complicated by items, fetishes, stress, STDs, addictions, and having to balance training with the increased payroll costs. It’s made to look like a clicker game and has the features of one, but it’s intensive and not idle at all, which makes for a surprisingly involved game. However, once it’s over and you are satisfied with your score, there is not much reason to return.