I’ll be honest here: the older Zelda titles never held my interest much. I could appreciate the simplicity and adventurous feel of the original, I even kind of enjoy Zelda II, but neither A Link to the Past nor Link’s Awakening are games I would voluntarily play. This made it awkward when my family gifted me the Switch remake of Link’s Awakening for Christmas, which I had avoided buying for myself. With the Switch down in the living room, I couldn’t get around it. I had to replay this game.

Don’t worry Zelda fans, because the twist to this story is that I actually came around to really enjoying the game. I always felt that the original fell short due to its lackluster presentation and simplistic design, owing to me being much more fond of the Nintendo 64 titles and onward. What Grezzo did here is not just port the game to a modern system, but also overhaul it with a brand new artstyle not seen before in the series. It takes the basic visuals of the Gameboy version and dials up the cuteness to 100.

But before we dial up, let’s first dial a little back. What is this game about? 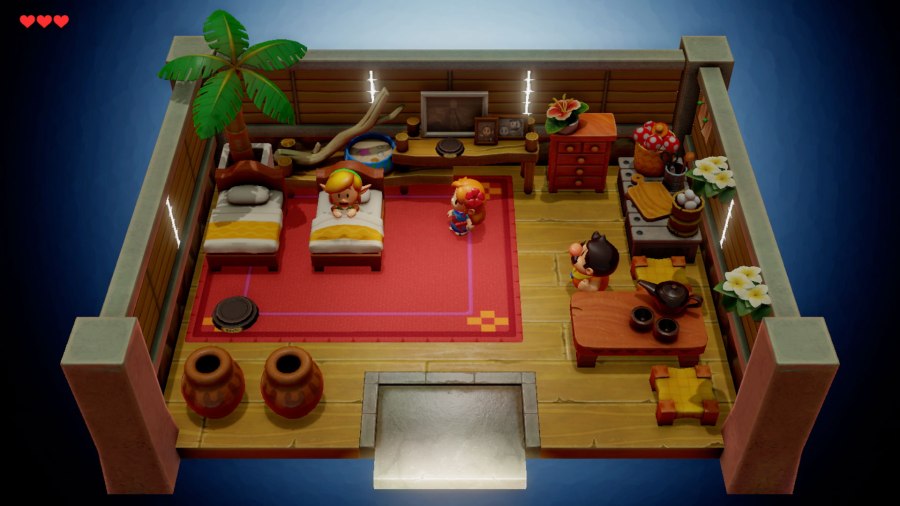 It’s a follow-up to A Link to the Past. While out sailing the seas in search of a new adventure, Link winds up in a storm and is thrown off his raft. He ends up stranded on the beaches of Koholinth Island where a girl called Marin rescues him. After waking up and recovering his equipment, an owl appears and informs Link that his arrival has stirred up the local monsters. However, he can not leave the island until waking up something (or someone) called The Wind Fish, who slumbers in a massive egg atop the largest mountain of Koholinth.

The story is the first time that the Zelda series would deviate from a standard “save the princess” story and I am impressed with some of the details and nuance in here. Marin especially ends up being the first character in a Zelda game that I’d say is truly likable. She keeps playing a role throughout the story and shares many moments with Link, including a segment where she must be guided to a different location and you can have kind of an adventurous date with her. You can just go straight to the destination, but there are many hidden bits of dialogue and fun interactions to discover.

Throughout your adventure you learn more about Koholinth and meet a large cast of island natives. While no other character is as well-developed as Marin, the islanders are all fun and the game is filled with memorable encounters. I don’t remember the last time a Zelda game actually had me laughing. To contrast this, the game is constantly building on the lore of Koholinth and hints at a dark secret behind your quest that comes with an emotional finale. Now that the game is so bursting with character, that ending hits harder than ever before.

In terms of gameplay, much of the original game has been preserved. It’s a top-down style Zelda title with controls similar to A Link to the Past. Link now has two item slots to use and many of the game’s upgrades become passive inclusions that don’t have to be equipped at all. Link’s shield, the Pegasus Boots for running, the strength upgrades, and various other upgrades are instantly mapped to buttons or replace older equipment. The item slots are just for Link’s actual tools, which includes old favorites like the hookshot and bow, as well as new additions like Roc’s Feather for jumping.

Link’s arsenal and moveset is put to good use both in the challenging dungeons and in the overworld. I was especially fond of the rafting mini-game, where your hookshot skills can be used to gather items or set new speed records. The dungeons are all quite pleasant and remind me more of the original Zelda than A Link to the Past. Few of them have more than one floor, which makes navigation less of a hassle and makes it easier to get an overview of the entire dungeon on your map. The old 2D-sidescrolling segments make a return and, with the addition of the feather, now includes genuine platforming elements.

However, before you can enter any dungeon, the player must first complete a mini-quest to get the relevant key. These are fun activities, but I will admit that Link’s Awakening doesn’t always make it inherently clear what to do and where to go. Fortunately, there are two helpers to be found in the story; the owl makes frequent appearances to provide cryptic guidance to Link and the player can head to the telephone buildings to request a hint from old man Ulrira. Only once did I find myself TOO stuck, only to later figure out I was just being stupid and missed something obvious. 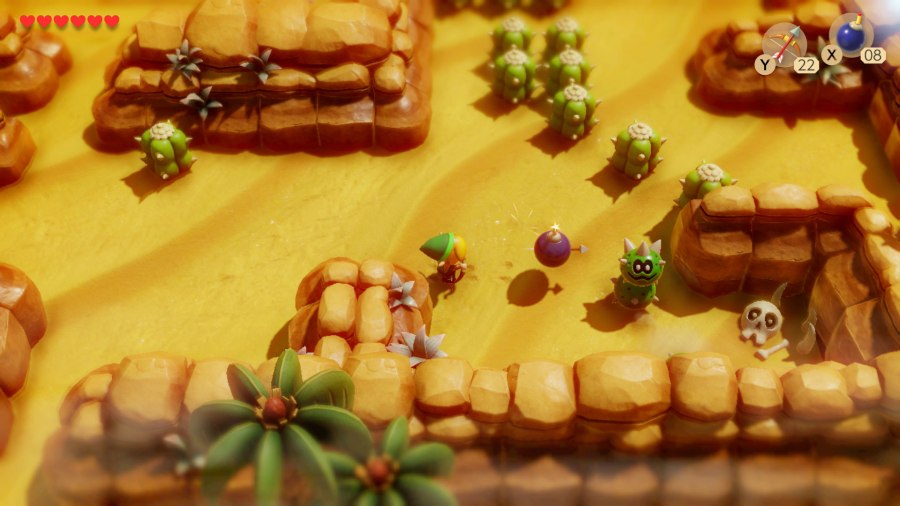 The dungeons are another matter, because there I often found myself utterly unable to progress and desperately going up and down trying to find keys. While the puzzles themselves are great and constantly introduce new gimmicks and challenges, the design of the dungeons often has key portions hidden behind destructible walls. Perhaps easier to see when you were a young lad with a gameboy screen pressed to your face, but I certainly had trouble seeing some of these in the updated graphics all the way from my couch. Some puzzle gimmicks can also be underwhelming, like the final dungeon using the “Lost Woods” strategy of having you look up what way to go in an endless maze.

The boss fights can also be a difficulty spike that isn’t always appreciated. Some of these I really enjoyed fighting, others were a bit of a hassle that left me confusingly trying out my entire inventory to figure out what item would actually cause damage. The final boss is especially bad in this regard, as it has multiple phases that are all weak to different items, some of which are finite.

I did like the enemy design of the regular foes. Link’s Awakening brings with it the return of various beloved enemies, as well as the inclusion of many new ones. You really feel that Link gets more powerful, as enemies that give you trouble and keep you from exploring late-game areas become one-hit kills later on or you gain the ability to counter their attacks. The game also has a bunch of cross-over cameos with the Mario franchise, so players get to battle with Goombas and team up with a Chain Chomp, just to name some examples.

This remaster of the Gameboy classic gave me a newfound appreciation for how much it did for the Zelda franchise. It both innovated on design ideas of its predecessors and introduced new concepts that would become series mainstays. Trade sequences, helper characters, collectibles, mini-games, those are all thanks to this little pocket adventure. The remaster adds to the achievements of the original by connecting the entire world, cutting down on screen transitions and making Koholinth feel less blocky. Its new art style and the orchestrated soundtrack also helps spoiled gamers like myself who could never get into the original due to its lack of personality, and should be a treat for fans looking to re-experience a part of their childhood.