I have never been good with adventure games. Something about the logic required to tackle them just doesn’t click with me and if I ever find myself with a map screen, unsure of where to even go to kickstart the storyline, I’d rather play anything else. Still, despite this dislike for adventure games, I still have a lot of love for Sierra, the titan of graphic adventure games and early pioneers of the text adventure.

That love is mostly earned through Crossfire and Donald Duck’s Playground, though. Not sure if that counts.

Yes, while most would fondly remember Sierra for Leisure Suit Larry or King’s/Space/Police Quest, my nostalgia comes from their action titles. It wasn’t until I browsed through their catalog that I realized old favorites like Red Baron were also published by them. Dig a little deeper and you eventually find Crossfire, a 1981 shooter game and an early entry in the twin-stick shooter genre. 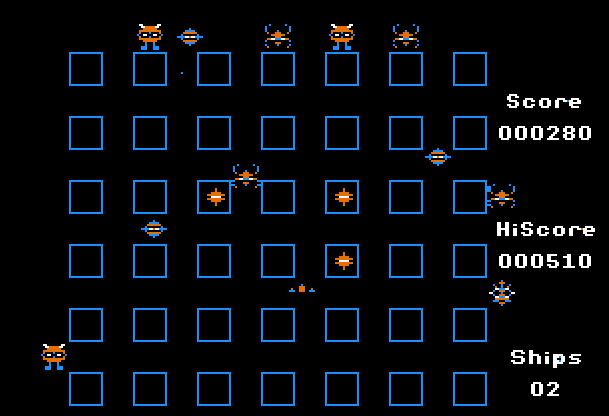 In Crossfire you find yourself controlling a small machine that can shoot in four directions. The playing field is a series of corridors separated by blocks and you are surrounded by enemies that enter this maze to destroy you. With IJKL you start to move around at high speed and with ESDF you can pop off shots in each direction. The game only has 1 looping level that you win when the last enemy is defeated.

Enemies come in 4 types each with a different sprite. The first wave of baddies are little spaceship thingies, but as you thin their numbers, they are replaced with bigger spaceships, followed by humanoid enemies, and ending with robotic skulls. The enemy types are, however, only an aesthetic difference to show you are getting closer to winning. Though it may feel like the skulls are more aggressive, that’s just the tension getting to you. Every enemy is just as fast, just as difficult, and they all die in one hit. The same goes for you, but you have 3 lives. 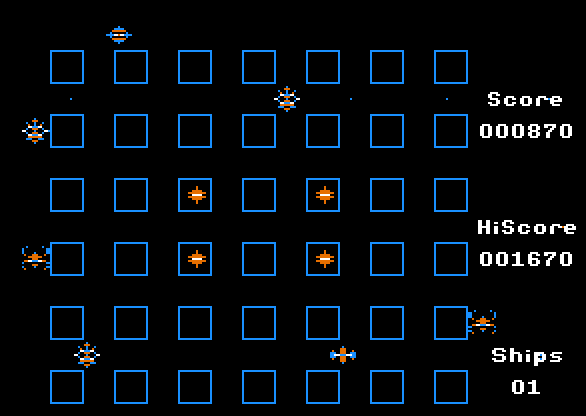 I played this game on the Apple II and do have to say that the game struggles. All enemies are visible all the time and the game run sluggishly as a result of that. When a round started, my avatar moved way faster, only to slow down to a lower but consistent speed after the first enemies entered the field. On the Apple II, I also noticed that the black background was an issue in combination with the tiny, blue pellets that make up the game’s bullets. This is a frantic game and the lack of visibility can feel unfair when some stray hit you never saw coming ends an otherwise great run.

But these are the only two complaints I have for an otherwise action-packed and addicting game. Wiping out a horde of foes while darting in and out of hallways feels empowering and the game controls so well and intuitively. I was especially fond of how it buffers shots: if you press fire while moving and you’re still behind a block, you’ll fire that shot right as you pop around the corner. It’s also cool (and fair) that enemies can accidentally kill each other by colliding.

While the game only has that 1 level, it does increase in difficulty. The game has an ammo system that limits how often you can shoot before reloading and this ammo limit decreases each time you complete the game without going Game Over. When you’re out of ammo, you need to grab a power-up that randomly spawns, forcing you to head into danger and dodge around enemies before you can fight back again.

Crossfire has the makings of a fantastic game. It has a simple formula that just works and controls well, so if it ran more fluently and had some visual upgrades, maybe implemented different behavior for the enemies, it would have been a timeless classic instead of a personal favorite. Whose up for a Crossfire remake?