When it comes to retro strategy games, few names hold as much sway and nostalgia as M.U.L.E.. Originally released in 1983 for various home computers and eventually ported to the NES, M.U.L.E. was a multiplayer economics game that captured the imagination of gamers with its Douglas Adams-y light sci-fi setting and accessible but deep gameplay. It was great to finally get an opportunity to play it now. just a shame that I had to do it alone.

The game is set on the planet Irata, where 4 colonists are dropped off to exploit the planet’s natural resources and enrich the colony alongside themselves. Each game is a competition between 4 players, with the AI filling in any vacant spots.

Players first pick their race and colors, which affects some gameplay parameters, and are then immediately thrust into cutthroat economic warfare. The goal of the game is to get filthy rich, preferably at the expense of everybody else. Players acquire plots of land and then purchases a M.U.L.E. (Multiple Use Labor Element) to work that land with a variety of different outfits that generate difference resources.

Food is best grown at land on rivers and decides how much time you get to complete your turn.

Energy is needed to power your M.U.L.E.s and make sure you get the best yield from your land. It’s best generated on flat terrain, but any land will technically do.

And Smithore is a valuable resource that influences the cost of M.U.L.E.s, but mostly exist to be sold for pure profit. It mostly appears in mountain ranges, where you can also find rare, alien creatures with treasure chests to steal.

Each land can only generate one resource and, each turn, players compete for a free plot of land. A cursor moves across the screen and you hit a button to get the land you want when the cursor crosses over it. Players then take turns in order of wealthiest to poorest and have a chance of encountering a special event. Players in the lead tend to suffer equipment failure or even lose entire plots of land, while those lagging behind frequently get (monetary) support. Events can also affect the entire colony, such as sun spots to boost energy yield or pirate raids that plunder the smithore supply.

The turns in M.U.L.E. tend not to be very interesting. The timer is overly generous considering you oftentimes only have to assign a new task to your 1 new plot of land per turn, unless you want to overhaul your other plots to make clever use of shortages or won an extra stretch of land in an auction. You can squander your remaining time in a pub for free money or go hunting, but this might be vexing to anybody waiting for you to round off your turn. 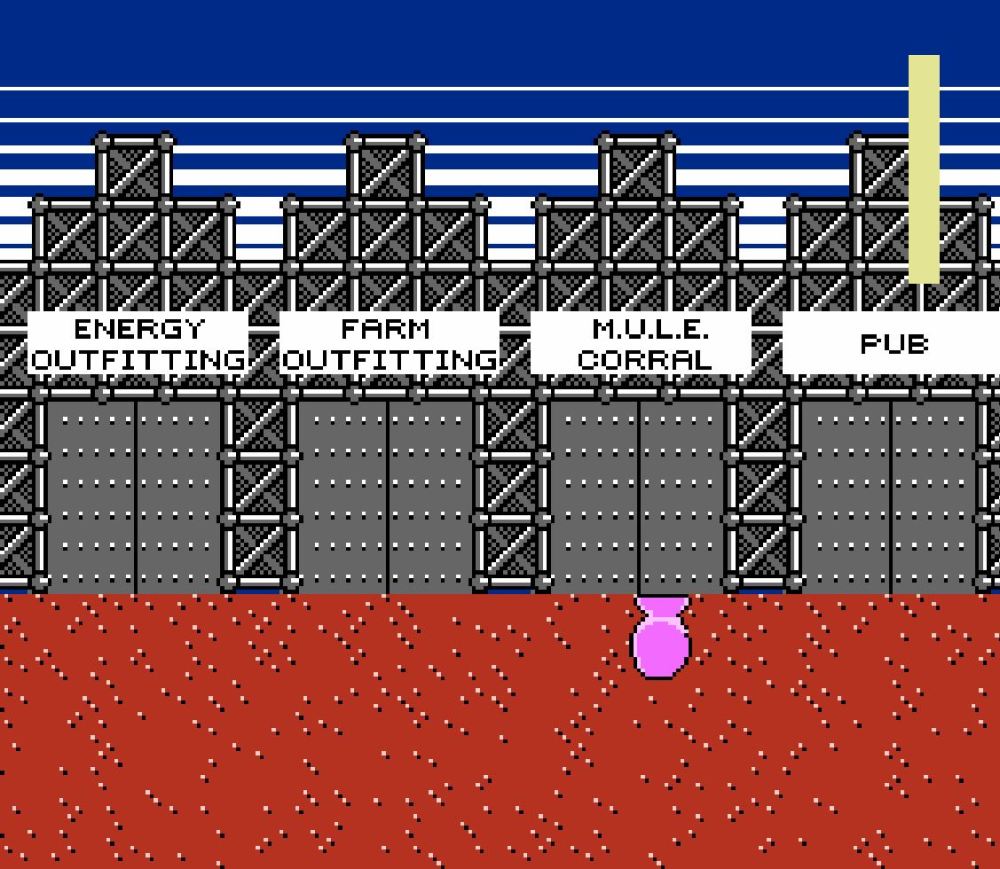 There is also no way for you to interfere with the operations of other players or the colony as a whole, which isn’t too stunning when you consider the game’s humble origins, but does make it a shame nobody ever followed-up on its popularity. M.U.L.E. was no golden egg in terms of sales, but it warranted some more expansion in my eyes.

While the turns may not have much for players to do, the auction part is an interesting segment and one frequently cited  by nostalgic reviewers. Players are shown their consumption and production of each resource and shown if they have a surplus or shortage of that good. Players with a shortage can choose to buy some and those with a surplus are encouraged to sell. Sellers are then put on one side of the screen and move down to lower their price while buyers move forward to increase their bid, literally meeting in the middle. A cruel seller can tempt a buyer out and then keep stepping back to see if the buyer will increase their bids, or a mean buyer can lure a seller down with the threat of spoilage looming overhead if they can’t move their stock. Either side can also move all the way up or down to sell or buy to/at the colony store for the worst margins.

This is where a problem arises, as most people nowadays will play M.U.L.E. solo. Unless you have friends who are willing to gather around an old home computer or emulated version of one, the only decent way to play the game is on the NES, which isn’t exactly the hottest item anymore either. The AI will do a decent job at playing the game, but always picks the same race and has overly predictable behavior in the auctions.

If you want to play the game, get that NES version and some friends. It’s a great time and the NES also benefits from some really nice graphics and a voice announcing the turns. The game’s a real looker on the home console, whereas the computer versions are a little gray and drab-looking. To compensate, the NES town is less efficient in its lay-out and the NES lacks some scenes and effects from the original.