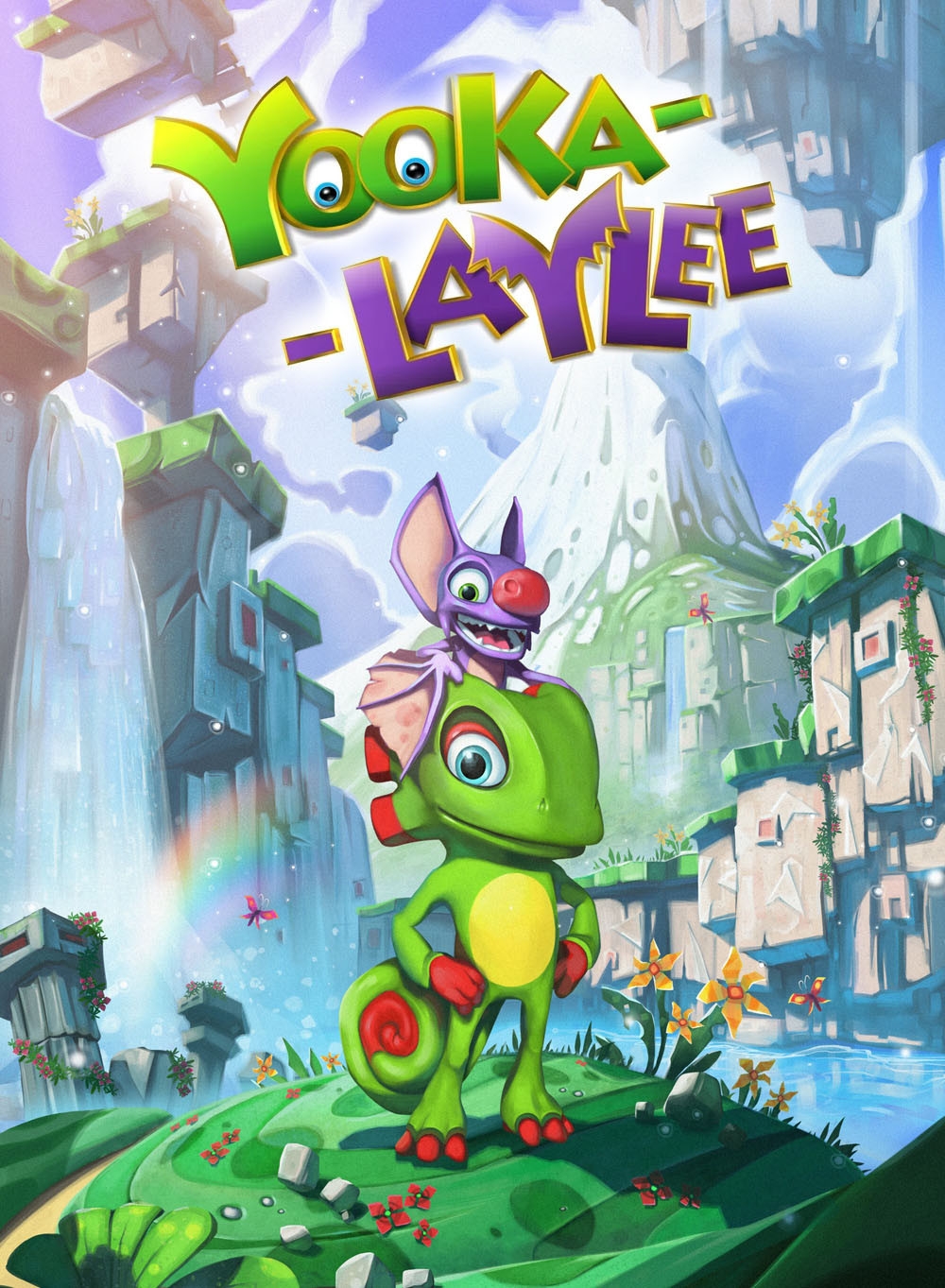 As a Banjo-Kazooie fan since childhood, trying to write a coherent and fair review of Yooka-Laylee has proven difficult. My first draft for this review ended up more like a rebuttal to the game’s detractors and their arguments, which turned out nice, but wasn’t at all useful for informing purchasing decisions. So let’s put that Banjo nostalgia to the side and focus on Yooka-Laylee and its own merits.

The game stars the heroic chameleon Yooka and his belligerent friend Laylee the bat. They have recently moved into a cozy place called Shipwreck Creek and uncovered a mysterious book with golden pages, which is promptly stolen by the evil megalomaniac Capital B who resides in the Hivory Towers corporate complex just across the hills. During this theft, the book’s pages are scattered all across the world, rendering it powerless. 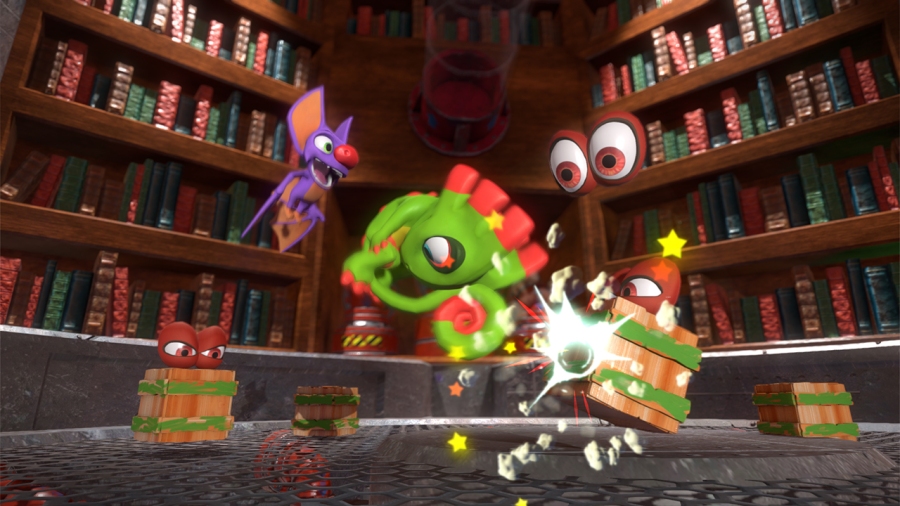 Yooka and Laylee head to Hivory Towers, which acts as a large HUB from which you access the game’s 5 levels. The portals to these other worlds come in the form of large tomes that are accessed by adding the golden pages (Pagies) to them. This allows you to choose between playing a miniature version of the level for a while to get a grip on its environments before adding all the required pagies and growing the level to its full size. A novel little idea.

The game itself is a classic revitalization of the collect-a-thon sub-genre of the noble 3D platformer. Each level has a number of collectibles, most prominently the 200 golden quills that act as the game’s currency, which you find by exploring. This exploration also leads you to challenges and NPC’s that reward you with Pagies if you overcome their challenges or help them, which you then use to open up and expand future levels.

There are 5 worlds to explore each with its own funky theme. You got a Mayan temple with surrounding grasslands, a lively casino with oversized games, an intergalactic battlefield reinterpreted as a high seas adventure, it’s all very creative and the team at Playtonic crafted some impressive-looking worlds. These are enormous places full of creative scenery and the cartoon artstyle is widely appealing.

More important than the worlds themselves are the characters contained within, which are of a high caliber. Each world has some throwaway characters that provide various missions, like the pumpkin dudes in the spooky stage, but the game also frequently brings back familiar faces that feature in multiple worlds. Each world has a Donkey Kong Country-style minecart level hosted by the nostalgic, elderly Kartos, each world has an arcade cabinet manned by the outdated dinosaur character Rextro, and there are supporting characters like Trowzer the salesman and Dr. Puzz, who transforms the duo into different creatures so they can complete special objectives.

The writing is witty and very light-hearted, offering a fun and colorful adventure for the kids without sacrificing appeal for older gamers. The game frequently had me grinning at its jokes, particularly Laylee’s overly-confrontational nature and how she treats the various characters that stand around requesting the help of our heroes. Capital B is another standout example, a true comedic villain and a power-hungry capitalist who frequently taunts the player across the adventure. It’s especially fun to see how many jokes they manage to base around Capital B’s corporate jargon and his interruptions are infrequent enough to not grow stale.

In true collect-a-thon fashion, you start off with a relatively small moveset. You run, jump, and attack, but with quills you can purchase moves from Trowzer. The game is a bit intimidating at first as you slowly trot around the large, open levels trying to figure out where to find content, but you keep getting more ways to get around these spaces quickly. Trowzer’s moves don’t just add to your mobility, they also have puzzle-solving potential and frequently more than one use. Your invisibility, for example, allows you to bypass areas guarded by security, sneak past enemies unseen, or redirect lasers.

The control scheme is very easy to understand and use, even as the new moves are piled on top of it. The transformations by Dr. Puzz do change these up completely, but each new form can only do so much and you receive a short rundown of the new abilities every time her services are used. 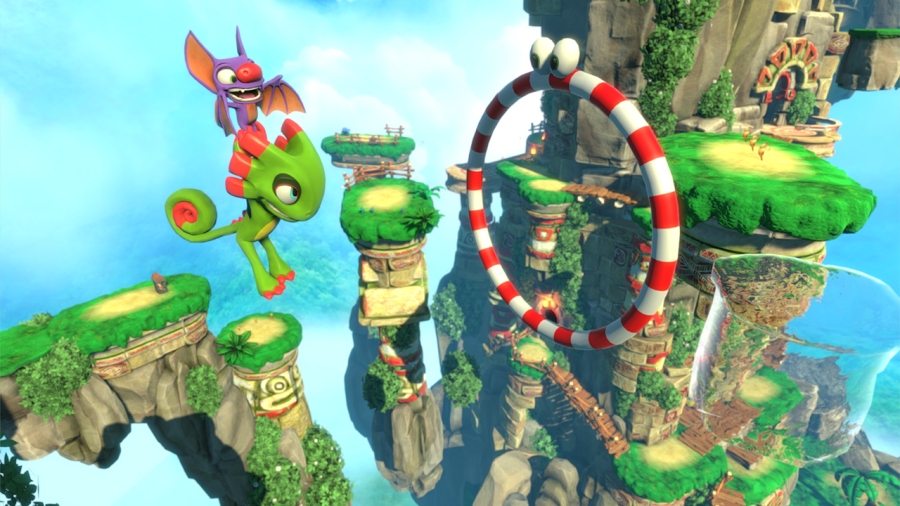 A consistent annoyance with the game lies in the combat, however. Yooka and Laylee can attack enemies in various ways and gain new moves to dispatch foes with as the game goes on, but anything other than the basic mook is a hassle to deal with. Foes have way too much time during which they are invincible to anything you can throw at them, whereas their own attacks aggressively track your movement. Especially the flying enemies were obnoxious: their projectiles home in on you and they are invulnerable until they have fired them, after which you need to somehow land a hit on a small, flying enemy while dodging those projectiles. Keep in mind, these guys come in packs.

The exception here are the boss battles, which were all fantastic and deliciously challenging. They are all long and complex, with multiple phases and attacks that are tricky to counter. I also like how you can accidentally stumble on some of these. It catches you off-guard, in a good way. They also don’t have the problems that make regular foes annoying to deal with and all felt fair to fight against.

While the game was plenty creative in its level and character design, I do lament that similar creativity was not afforded to the game’s objectives. There are hundreds of Pagies to get, but the tasks you need to complete to get them tend towards the repetitive. Each level has familiar building blocks like Kartos’ minecart stages, a boss-fight, the arcade cabinet, the five ghosts you need to capture, and getting all the quills. Besides that, many objectives will just see you explore the level until you meet an NPC who challenges you to an obstacle course, which may or may not be timed and frequently takes place in a special areas detached from the rest of the level.

I did have fun with these, but it was a bit of a letdown after seeing how creative the objectives in fellow collect-a-thon revival A Hat in Time were. There were also many exceptions to this, such as a puzzle maze in an old temple and the various challenges for which you need Puzz’ transformations. By the time I got to the 5th world, I did kind of tire of the formula and left after only 2 hours of playing around in it. 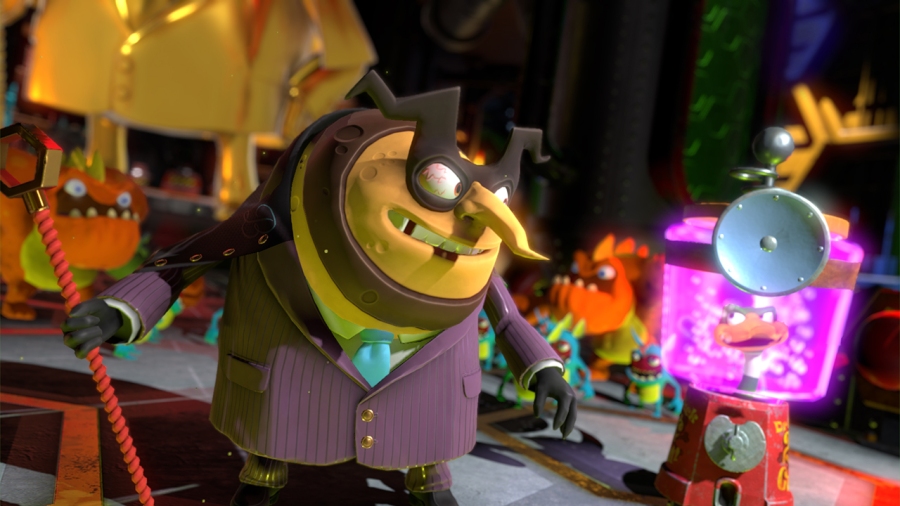 Yooka-Laylee certainly has shortcomings and its easy to criticize it for its lackluster combat and dependence on obstacle courses, but I feel that these issues are overshadowed by how much I admire the game. We are in an industry that loves to declare mechanics, features, or even entire genres as DEAD, but here we have a “new” game that understands these dead genres and returns them to the spotlight.

It stumbles in places, but I’d say that it’s overall goal of reviving 3D platformers and proving that gamers desire these kind of games was a major succes, even if A Hat in Time outshined it.