A while ago I said I wasn’t going to review Atari games much because there’s so many of them and they don’t tend to leave me with much to talk about. However, ever since seeing Mountain King in an old Angry Video Game Nerd episode, I have wanted to try it out.

The game is a pure experiment in exploration-driven gameplay. The player takes on the role of an explorer deep in the mines of a massive mountain. Within this mountain rests a crown and it’s your objective to acquire this crown and deliver it to the peak.

You have a timer in which to accomplish all this, but guidance is limited and to explain the process of getting the crown would be spoiling most of the gameplay. You explore a maze of mineshafts filled with treasures both visible and invisible, which earn you points; for nothing in Atari games is as important as getting those sick highscores.

I really enjoy the animation on your stickfigure character. The limbs move with much detail and you leap through the air heroically, half-hoping there’ll be a platform where you estimated one would be. If you fall, you have to move the stick around to gradually pick yourself back up. The jump itself is on the finicky side as you get more height out of it the longer you press the button. In the tight corridors of the mines, trying to get where you want to be can be frustrating with these controls. You constantly just barely don’t make it up a platform or bump your head against something, which sends you plummeting down.

For an Atari game, I must say the exploration is nicely handled. There are a few landmarks and many of the paths are easily recognized, which makes it easier (though not easy) to find your way around. You can’t ask for too many environmental details on a system like this, but they pulled it off well enough here. 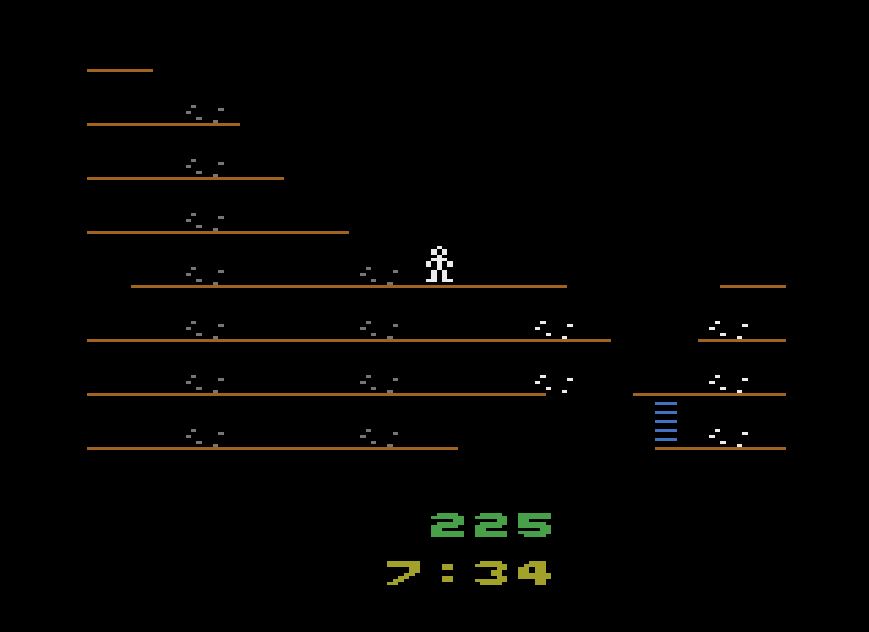 Sound is also an impressive quality here, as much as the Atari can manage. A key element in figuring out the game lies in a sound puzzle where you follow music cues. The code for this is a bit jank because it gets confused trying to track your vertical AND horizontal proximity to what you need to find, but it wasn’t too much of a struggle. Speaking of sound, there is also a rendition of Edvard Grieg’s “Hall of the Mountain King” that plays when you’re in the final stretch of the game. Not the most pleasing rendition of it, but a cool detail that gets you amped up as you rush towards the final objective of your journey.

What I will say is that it’s frustrating to both deal with the time limit and the game’s fondness for losing progress. Even if you solved a puzzle, a slight misstep can instantly lose you that progress and force you to repeat the process all over again. This wouldn’t be too bad if it the logic wasn’t so shakey. There’s a part where you think you fixed a problem and can proceed, but you actually need to climb up something that doesn’t at all look like its climbable. Walking around will reset your progress entirely and this had me stumped for a long time.

Mountain King isn’t long, so if you have the chance to play it and the patience to figure out a game that doesn’t explain its gameplay much, then this is a great title for the ol’ 2600.