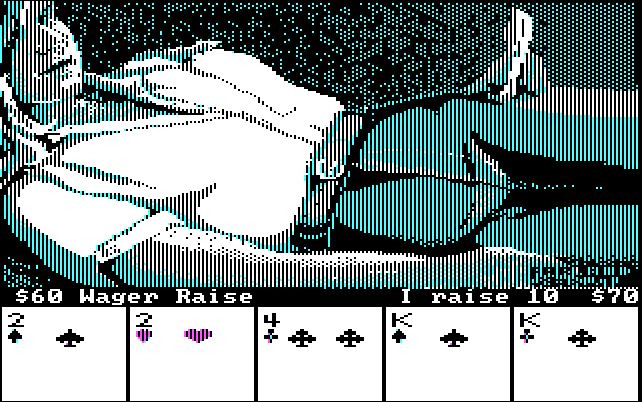 The game originally launched with 2 potential girls to act as opponents and later expanded with data disks that provided an extra girl each. The gameplay is a simplistic take on Draw Poker that basically does what it should. Players are handed their cards, put in the anté, and then either respond to the AI’s bid or take the initiative in it.

The controls take some getting used to and aren’t intuitive at all, certainly not on the older systems like the Apple II or Atari 8-bit. You press the direction keys (or corresponding numpad keys) to cycle between options and raise your bids to a maximum of $25 each time. After the first round of biddings, you use the same controls to mark what cards to exchange and then enter the second round of bidding and the reveal. 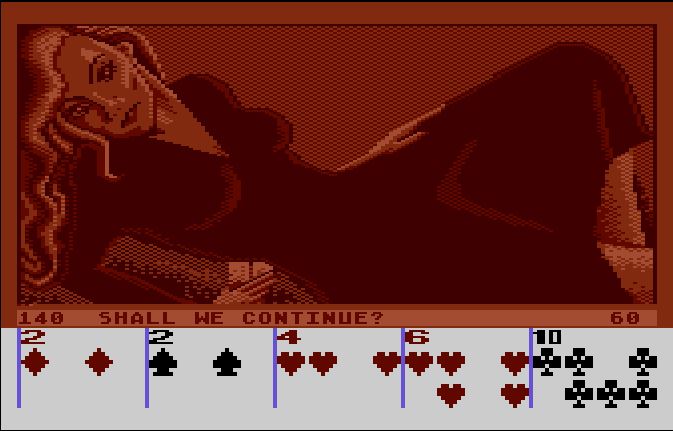 It’s poker, alright. Both you and the AI start with $200, but whenever you exhaust their wallet, the girls will exchange some of their clothing for another $100. They’ll take that clothing back when you suffer losses yourself, so the deck is technically stacked against you, but the AI isn’t overly competitive. It can catch you off guard from time to time, but it’s also prone to overbidding when it has even the slightest chance of presenting a winning hand, which made it easy to score some big victories and drain their savings quickly. Winning felt like an inevitability every time I played and I am not even that good at Draw Poker.

Now, the most important factor is the art and that is a fluctuating thing. Between systems, the clarity of the girls’ pictures varies extremely and it’s never “good”. The limited colors on the display warp the pictures beyond recognition, so if you actually want to enjoy some lewd shots of women undressing, get the Atari ST, Amiga, or the Commodore 64 versions. Anything else is just not gonna do and even then it’s setting the bar very low.

So, is it worth playing? Not exactly? I remember a teenage Casper playing better versions of Strip Poker on online platforms. It’s fun to laugh at, but even then the quality of the art in a hindrance and the clumsy control scheme doesn’t make for a very fun poker experience.