Back when I was still in primary school, the older kids were allowed to play games on the computers whenever it rained during recess. I often looked on with envy as they played Donald Duck’s Playground, which I believe was the only game installed on these old machines. When I finally became one of the “older kids” myself, all games were removed from the computers and you could only do schoolwork on them. I more or less forgot about Donald Duck’s Playground over the years, but I came across it by pure chance and decided I was going to fulfill a childhood ambition.

The game is a true working class story. You alternate between playing Donald Duck and his nephews, with the goal being scraping together enough pennies working various unfair jobs so you can buy toys with which your nephews can play at the local park. 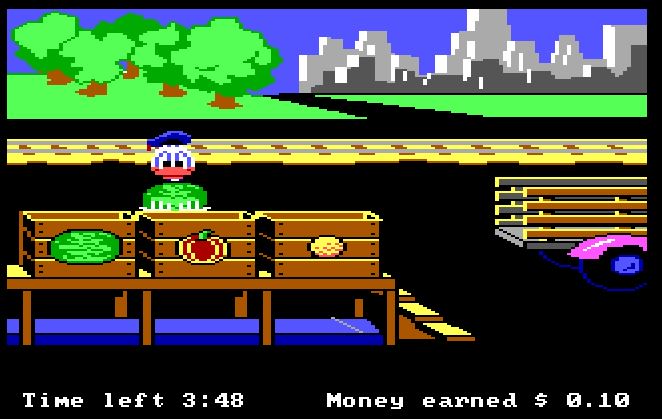 The game offers 4 mini-games that focus on reflexes and problem solving. At the airport you collect luggage and throw them in the correct boxes, at the train station you reroute tracks to get people to their destination, and at the grocery store you catch fruit and put it in the right containers. The games are generally easy to pick and play, but the job at the toy store might have warranted an on-screen explanation. I could not figure out how to make this one work and it’s the only game where you risk losing money if you don’t do it right.

Each successful action awards you a few cents and you are asked to set the length of your shift at the start of each mini-game. You are paid after completing the shift and can then choose to play again or try another one.

With this money, you can then buy toys and decorations from stores manned by various Disney friends. This has an educational layer to it, as you need to manually pick out what coins and bills to use to pay for your item. You even need to figure out how much change you’re supposed to get if you decide to overpay for it, which is a great idea. This is valuable stuff to teach kids and I like the idea of making them do “work” mini-games to earn that spending money.

The mini-games themselves aren’t that fun, though. The only one with complexity to it is the train game, as the train will keep going while you try to solve the puzzle. You’re rerouting the tracks on the fly and it takes actual skill and quick thinking to get a good payout of it. Both the grocery store and airport games are just variations on grabbing a thing and putting it in the corresponding box. It’s fine, but even a kid won’t find it stimulating for too long. Especially the airport game I doubt any kids are going to care about for long enough to finish a 9-minute shift. These games needed more of a twist.

The reward at the end is also not that exciting. You spend your money on toys at the stores and then head to the park where a nephew takes over and can interact with them. This is usually just a quick animation or one that loops until interrupted, all while you are listening to obnoxiously chirpy music.

Once you clear out the stores and filled up the park, there is not much reason to keep playing or doing the mini-games. To be fair, once you’ve saved up enough money to buy all of that, you’ll likely have caught hundreds of fruits and won’t want to keep playing anymore anyway.

Donald Duck’s Playground is a fun side-note in gaming history and, at one point, I feel it taught some valuable lessons. The train mini-game is legitimately good and I like the idea of making kids choose the coins with which to pay for stuff. The Disney branding is familiar and welcoming, with sprite art that looks great and clearly depicts the characters. It even nicely captures Donald’s temper whenever you drop something in the fruit game.

However, the mini-games don’t do enough to keep you coming back to it and getting to see some brief animations in the park is a poor reward to tie it all together.