Indie games love to bring back forgotten genres and modernize them for today’s audiences, and no genre is as old or forgotten as the thinly-veiled rip-off of popular arcade classics. The home computer era was rife with pretenders mimicking the big arcade hits and Strikey Sisters revives this forgotten art by bringing us a Breakout clone.

The game exchanges the usual paddle that bounces the ball around with two angry anime girls. They are on a quest to retrieve their pet from an evil overlord and travel around the map beating up his minions by bouncing a ball around.

Each map requires them to clear every block on the stage, all of which take two hits with the ball to break. Each player controls one of the girls and can bounce the ball by either touching it, attacking it, or using a charged attack, which launch it at different speeds. The physics for this Breakout game are generally alright; the ball bounces around as you expect and you have enough control over it to break the blocks you want. It does struggle when the game’s gimmicks get involved though.

Besides the blocks that make up the levels, the game also spawns in monsters that all have different abilities. Some of these just wander around and try to attack you, some have projectiles, others have means of rerouting your ball. You can defeat these by hitting them with the ball or using your attacks on them when they get close, after which they drop power-ups that either immediately change the state of the ball or can be activated. With these, you can speed up the clearing of the level or defeat the other monsters.

While it sounds like a good inclusion on paper and it certainly adds to the game’s fantasy theme, the monsters are poorly implemented. Each one takes 4-5 hits to take down, which is absurd for a Breakout game. They also move around constantly and their AI is all over-the-place; sometimes they spam their attacks constantly, sometimes they cluster together so you can’t pick them off, some disappear into a corner and are never heard from again. They are obnoxious to deal with, yet even when you do, they just respawn seconds later.

It’s super annoying when you finally line up a shot you need and then a monster spawns in and bounces the ball off at an angle you can’t reach. The ball can even get stuck inside monsters as they spawn on top of it. There is no way to predict this kind of stuff and I have lost rounds because of this; I can’t fathom why the monsters weren’t given invincibility frames as they spawned in to prevent this or why the respawn rate is as high as it is.

Players start any round with 3 hearts each and lose one whenever a ball is lost or they are struck by an enemy attack. Health can be regenerated by food dropped from enemies, but this is uncommon. 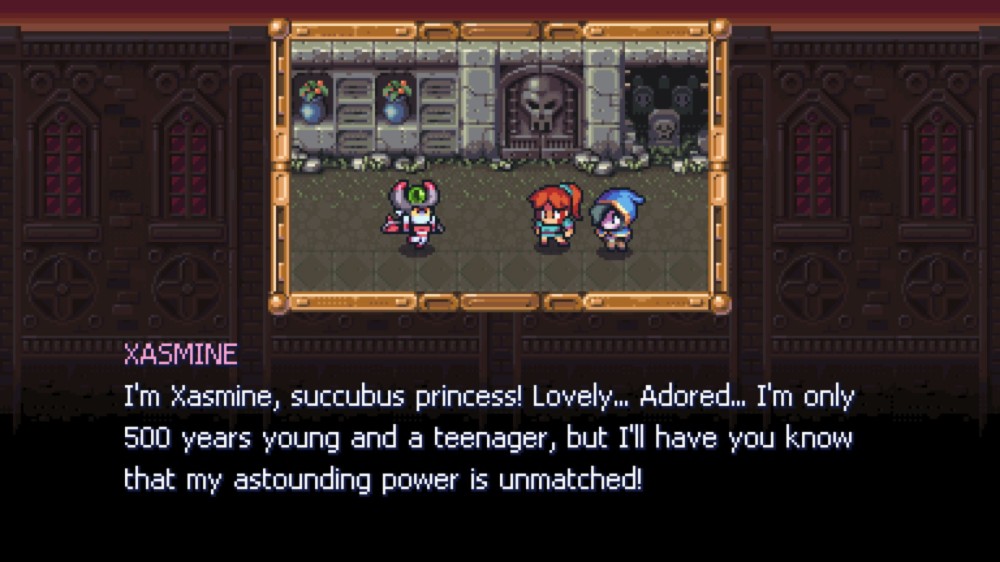 Boss-fights are also included, which feel strange. Like the regular enemies, bosses have a tendency to move around a lot and spam their attacks, but almost all of them are immune to damage unless the ball hits them from behind. The game expects you to line up a shot on a randomly moving target by bouncing it off a wall and hitting it in the back, all while also dealing with the regular enemies that also wander around at random. Some bosses took me an hour to beat because of this, while others would go down in seconds because they teleported on top of the ball.

Every boss feels functionally the same with different projectiles and sometimes a close-range move or unique skill to cope with. Stages also don’t vary up much aside from introducing new enemies, which also tend to recycle attack patterns. It makes for a repetitive game that feels like it’s desperately stalling for time until it’ll let you beat up the (admittedly cool) final boss.

Your power-ups can feel woefully underpowered for the job, especially during these boss fights. Almost every power-up has a critical flaw to it, like the pathetic damage radius on the flames left behind by the fire ball or the explosions of the magic bomb. The most jarring break of logic is the steel ball, whose purpose is to plow through blocks without bouncing off them. However, enemy projectiles still work as they always do, so a steel ball that shatters entire blocks will still bounce off a literal bubble.

I did enjoy the idea of the game and often felt like I was getting pretty good at it, but each level could easily take up to 30 minutes due to the overly-aggressive enemies and their high respawn rate. It often left me frustrated and the story wasn’t doing much to keep me engaged. Dialogue is awkward and overwritten, every interaction between the sisters and boss monsters feels unnatural, which goes on top of the questionable voice performance.

It tries to tell a comedic story, but I won’t blame anybody for skipping the cutscenes altogether. The two opposing personalities of the sisters also fade in gameplay where they both play exactly the same and generally use the same dialogue lines with the same delivery.

Despite its inspiration being a time-tested classic, Strikey Sisters has too many minor problems that are, frankly, inexcusable for a game with this focused of a concept. Every mechanic has some glaring flaw to it and the many tweaks that studio DYA Games made to the formula changed a pure, skill-based game into one dependent on luck. No Breakout clone should ever be spawning in obstacles that suddenly alter the course of the ball, after the player has committed to a move already.