After its initial success on the PC, Doom saw the light of day, or darkness of hell to be more appropriate, on many a home console. These ports were often lackluster, lacking content and performing poorly. For the Nintendo 64, a console more than a little notorious for its technical issues, they decided to run a different course and make a new Doom from scratch instead.

Doom 64 is a unique entry in the Doom series with a story of its own, new weapons, new stages, new enemies, and an approach to level design that feels like another evolution of what we saw in Doom II. Now, many years later, this odd duck has finally come to modern systems.

We once again play as the nameless Marine who saved humanity from the demon invasion. After a time of peace, the demons have now returned and it’s up to you to once again put a stop to them.

The game features 28 levels as part of the main story and a small collection of secret levels, but foregoes the typical “episodes” format. In the original game, you’d see your progress through hell on a map and every few levels would be concluded with a boss-fight. Doom 64 lacks such a structure. There is a boss-fight at the very end, but everything leading up to it are levels devoid of overarching context and which fluctuate in difficulty.

A little disappointing, but it does mean that gameplay isn’t interrupted by lackluster story bits. I am fine with Doom on the Nintendo 64 just being a bunch of levels with a cool, new monster at the end.

The levels are also quite impressive. They avoid getting as large as they were in the first Doom and tend to focus on more compact spaces or branching stages with recognizable scenery to act as landmarks. I never had trouble navigating the levels themselves and it’s fun as ever to fight your way through a Doom-level; shotgunning imps in the face, blasting rockets at Barons of Hell, and unleashing a plasma barrage upon hordes of Cacodemons. Doom 64 has that Doom feel to it. Especially these modern ports feel no different from Doom II. It might even be an upgrade, since Doom 64 features new weapons and enemies, but it also lacks some demon species, so it balances out.

While I didn’t get lost in Doom 64, I certainly still felt like I was wasting a lot of time. As always, you are hunting for keys to unlock doors and access more of the level, but these key hunts are harder than ever before. You’re left scouring the levels for switches and other ways to progress, which is frustrated by the game’s lack of consistent logic. Some switches you can shoot, other you can’t. Some switches run on a timer, some of them are permanently active. Some switches activate things in the same room, others affect something on the end of the level. Heck, some switches affect multiple things for no reason. Double heck! Sometimes things change in the level without even touching a switch at all.

Doom 64 really needed different sprites for various switches and tie logic to these designs, because I could never be sure how to progress. The answer might be in the same room or it might be 8 rooms away. Every action you perform is cause to backtrack through the level, just to see what it actually impacted. Sometimes this would be so small I didn’t notice and ended up looping around for minutes trying to find it, sometimes I’d find out something was fixed and I had no idea what I had done to cause it. Doom 64 is confusing. 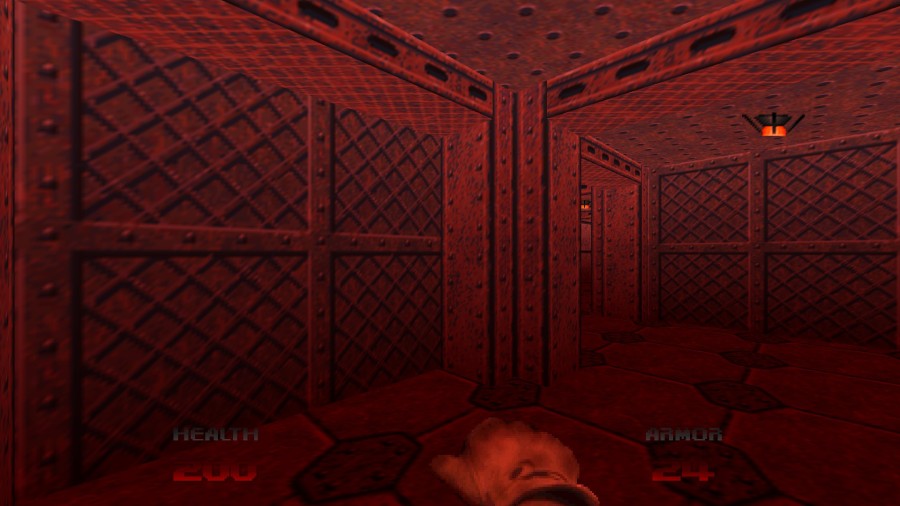 While that is a harsh critique, I will give Doom 64 credit for fixing my biggest grievance I had with the old school shooters. Dying still sucks because you lose all your equipment, but only a single stage had me actually reloading an outdated save to repair my mistake. I ended up dying on that level at the very end and then had to battle my way past spider demons with the pistol, which wasn’t going to happen. All the other levels would be very quick to set you up with at least a shotgun and few of them throw tougher enemies at you from the start. Even then they can usually be circumvented or tricked into attacking each other until you have reassembled a worthy arsenal.

Overall, I’d give the levels a 6/10. Their layout is creative and has a good flow to it, but the logic is shakey and it’s a little too fond off traps that can feel unavoidable. My favorite example is in Map 06, where players can fall in a dark pit and be left fighting off a horde of invisible enemies in complete darkness, with the only way out being a small ridge along the walls that travels upward, which is nearly impossible to see. I cranked up the brightness to the highest it could go and I still couldn’t make out that ridge as I was actively using it. 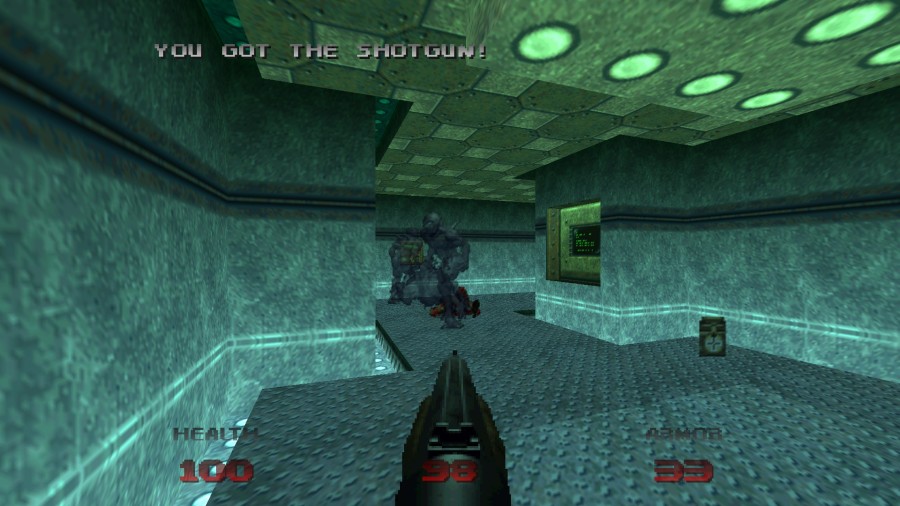 A final issue of note is the game’s over-reliance on spawning enemies. Doom has always had its “monster closets”, traps where hidden walls open up to reveal enemies that ambush the player. However, players could always hear the demons and be subtly prepared for a fight. Doom 64 unceremoniously spawns in new enemies whenever it wants and seems to take great pleasure in just throwing in Cacodemons and Hell Knights right behind you without notice. Enemies even get invincibility as they spawn in, all while they can still freely attack you. It feels very lame and some later stages really abuse this to create arbitrary difficulty. Nothing the super shotgun can’t fix though.

I realize a lot of the above criticizes Doom 64 for its lackluster enemy placement, cheap traps, and illogical level design, but I want to draw your attention back to that 6/10 I dropped earlier. For all those flaws, Doom 64 is still a classic Doom game. It has the atmosphere, the action, the iconic monsters, and hellish locales. I even came around to liking the ambient soundtrack in place of the usual metal tracks; it feels weird at first, but it’s something new and very well done when you take the opportunity to appreciate it.

A 6/10 is appropriate for the game and its port on PC. Doom fanatics will be pleased to have this special bit of Doom history available on modern systems, but most people will be better served with the BFG edition.