Total War: Warhammer is probably the best substitute there is  for the physical wargame, but that is of little use to fans of the sci-fi variant of Games Workshop’s golden goose, Warhammer 40,000. We have reviewed a number of strategy titles looking to bring the miniature-based wargame to a digital frontline, so far without a definitive success. I am sorry to report that Gladius is not it either.

I am aware that Gladius will be included in the upcoming Humble Monthly, so I am posting this review ahead of schedule to inform subscribers what to expect from it.

“It’s Civilization where the only victory goal is conquest” that is how Gladius was advertised to me and it’s remarkably apt. The game is a top-down, isometric strategy game where players take control of 1 of 4 factions vying for control of Gladius, an Imperial colony that was just a little too pristine to exist in this world of non-stop war and misery. These factions are a band of orcs who crash-landed on the planet, the local Astra Militarum charged with its protection, Space Marines because of course, and Necrons who had been slumbering beneath the planet’s surface for eons. 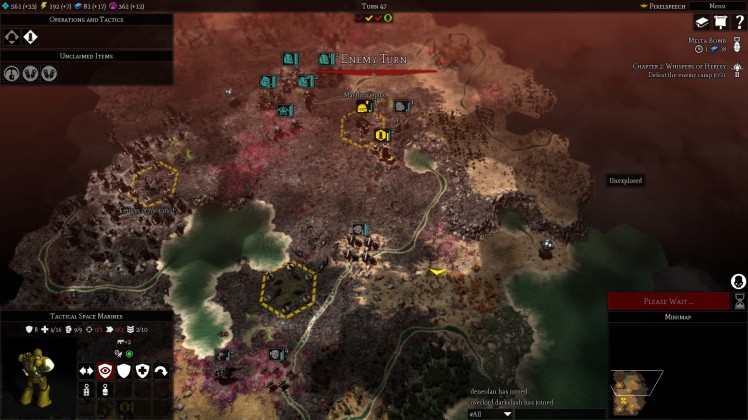 The game features no story mode to speak of, only custom matches where you set the difficulty, the amount of opponents, and the map size, alongside various other settings you can tweak. Each faction has the same opening cutscene with different narration, but receives missions throughout gameplay with big blocks of text that act as the story. It’s boring and more than a little overkill just to give players the objective to build a barracks and recruit 1 unit.

The game controls similar to Civlization 5; players explore a tile-based map with their units while building an expanding their cities. You encounter wildlife and neutral factions, this game’s take on the barbarians, and eventually build up your army and take on rival players and AI factions. While the game does feature resource management, most of this is handled by capturing resource deposits or expanding your city, and all resources go towards fueling your (hopefully) unstoppable war machine.

Each faction has its iconic miniatures turned into units here, but you have to make do with basic infantry until you have researched the right buildings & unit, and then build it in one of your cities. At its basic level, Gladius is competent at what it sets out to do and does make true on that pitch of being more combat-oriented. Neutral factions are plentiful and units are diverse enough to allow for a suitable level of tactical play. It’s just that the balancing is all out of whack. I think the best way to explain is by giving a rundown of how every one of my attempts at playing the game went down.

Space Marine – try 1: This run went relatively smooth. I expanded nicely, raised an army, fought neutral enemies, and captured resources. I eventually found the location of an orc player and mustered my force for an attack. As I did so, the game suddenly started a new mission that involved a neutral camp. This “camp” turned out to be the stretch of land between the orcs and my home base, which was completely scouted out and occupied by me. The game spawned a dozen high-level units out of nowhere, leaving my army squished and my city undefended. I could do absolutely nothing to account for this or counter it, unless I chose to save-scum. 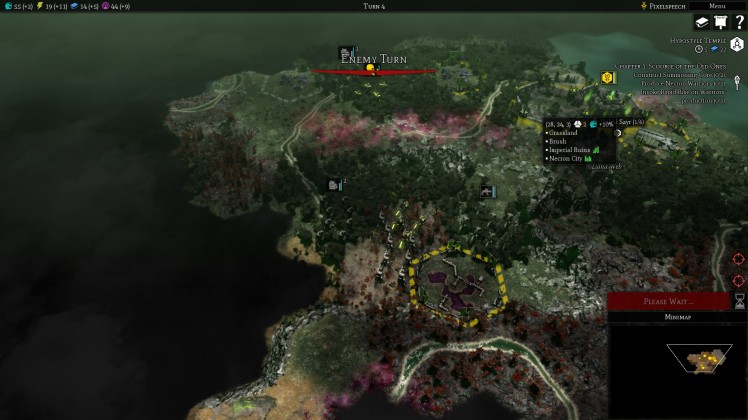 Space Marine – try 2: The random algorithm spawned me in a jungle that offered no resources. To my right were high-level neutral enemies and another player, to my left were 2 neutral towers and 2 units of Enslavers, which are sturdy, mind-controlling enemies. You only spawn with 2 units, both of which were enslaved. It takes 6 turns to produce a single new unit, which was promptly also enslaved. I dropped down a fortress of redemption, which was also enslaved. 70% of this game offered me literally nothing to do, as I had no units to fight back with. The other player eventually expanded all around me and effortlessly overran my undefended city.

Space Marine – try 3: In my final attempt as the Space Marines, I lasted some 100 turns before ending the game out of sheer boredom. The limitation for Space Marines is that they only get a single city, but they receive a free Fortress of Redemption (artillery tower) every 10 turns. I expanded and beat most of my enemies, but eventually ended up in a situation where every single unit I created had to walk across half the in-game map to reach the frontline. Transports are costly and fragile, and you only get alternative fast-travel options late in the tech tree. It’s also not like you have any other opportunity but to expand far & wide, as elimination of the other players is the only end-game goal. 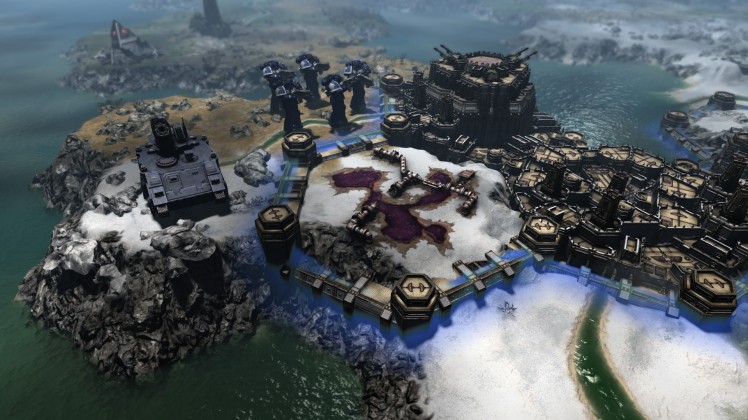 Astra Militarum: Expendable and fragile, the heroic Astra Militarum is one of the more sympathetic factions. Downtrodden as they may be, they at least get to have multiple cities. I secured my initial spawnpoint and kept exploring until I found a new area with resources and a tactical position. As I erected my second city, I found 3 units of Enslavers that promptly took over my entire army. I made a second one to slay the Enslavers, but the AI in Gladius always retreats when threatened and Enslavers move far. It’s a constant frustration to be unable to deliver killing blows as enemies retreat and return at full health 5 turns later, but to chase down an Enslaver I would have to fight through a horde of neutral enemies and my own, mind-controlled units.

On top of that, why does it take 4 turns to make a unit of guardsmen? There are supposed to be billions of these guys, they are tragic cannonfodder meant to be thrown into the meatgrinder. Why do they take almost as much time to make as Space Marines unless you research a temporary edict with a cooldown? It felt like I was playing with the Astra Militarum units, but not with their rules and balancing.

Necrons: The random algorithm spawned me in the corner of a map with literal hordes of neutral enemies blocking every avenue for expansion. I was outnumbered 1:5 in almost any fight and rapidly lost my starting army. Anything I captured would be quickly taken back the moment I moved elsewhere. All the neutral enemies are perfectly cooperative; aliens, wildlife, chaos cultists, Enslavers, they’re all in cahoots. Any enemy I damage just retreat behind a wall of other neutral enemies and comes back to haunt me later. I was having 0 fun.

Orks: Random spawn, immediately run into a horde of level 3 enemies, starting army is killed, city undefended, it takes several turns to get a basic unit out, game end.

The problems with Gladius are consistent across every faction and come down to its utterly arbitrary and random difficulty. A game can be a cakewalk until you’re bored and overextended, or it can spawn you in an impossible situation. Most of the above stories happened on the easiest difficulty available, which seems to have no impact on the level of the enemies it spawns or their tactics.

It takes a long time to muster an army of even basic infantry, with anything fancier requiring lengthy research, followed by long build queues, follow-up research, and unit production. 80 turns can pass before it’s viable to produce a unit of Devastators, which are your only early-game option against high-armor targets and buildings. Even then, units are so easily taken away by the sheer amount of neutral enemies and boss monsters. Enslavers are horrendously overpowered and unhinged, able to mind-control literally anything and form an impenetrable wall around themselves to retreat behind if threatened.

Fatally, the game is just boring. Whether you end up stuck and unable to expand because you’re dealing with hordes of neutral enemies or you dominate the game and have to manage extended supply and reinforcement lines, not one of my games remained interesting for more than 70 turns.

The gameplay issues described above are certainly to blame, but the lack of a story mode (outside of lengthy objectives briefings) and the drab presentation share in the responsibility. The visuals are ugly and the sound-department lacks the kind of oomph that Warhammer games need.

A Civilization game with nothing but war sounds appealing, but Gladius is quick to remind you just why the venerable strategy series has so much more to do in it than just throwing units against each other.