If it seems like I am contrarian now, be glad the writings of teenage Casper have vanished into the void. I first played Shadow Warrior while I was still in school and then decided it was my favorite old-school shooter ever. Even better than Doom! Suffice it to say, I got suspicious of my past self and decided to replay the game and see if still held up.

Lo Wang is a double dose of quasi-racist stereotypes. He is an aging Chinese-Japanese swordsman who used to be the bodyguard of a corrupt businessman called Zilla. After leaving his company and returning to his training, Wang is attacked by monsters and sets out to consult his master for advice. When said master turns up dead, slaughtered by Zilla’s demonic minions, Wang decides to get his vengeance and hunt Zilla down. 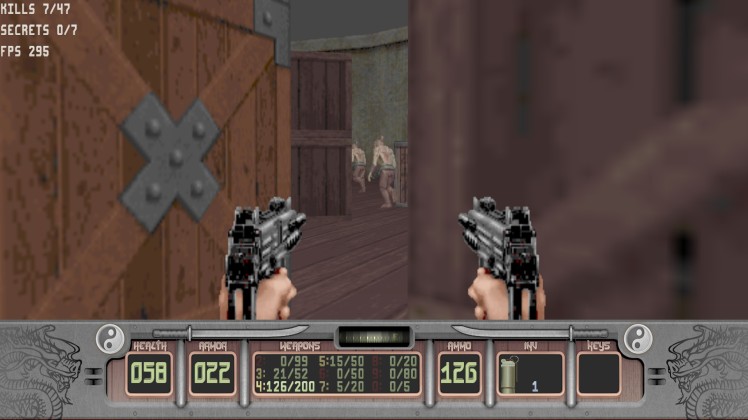 The game is cut up in two acts, the first of which consists of the 5 best maps in the game that were distributed as shareware. The second episode has a lot more content, making for a total of 20 levels not counting the two expansions.

The game is a 2.5D shooter in the same vein as Duke Nukem 3D. It’s a gory, fast-paced FPS filled with secrets and interactive elements the player can mess with. Whereas Id Software’s games favor tight controls and challenging level-design, these 3D Realms games instead put effort into the comedy and novelty levels.

In many regards, this works out well for the game. The shareware disc is a great short story with the highlight being the estate of your master. It’s this wooden mansions, dignified and large. You even need to sound a gong to open the front door. Then you step inside in the nicely-decorated lobby and hear someone upstairs having a tough time on the toilet. The comedy is vulgar, but the game revels in this and does a great job at setting up its jokes. 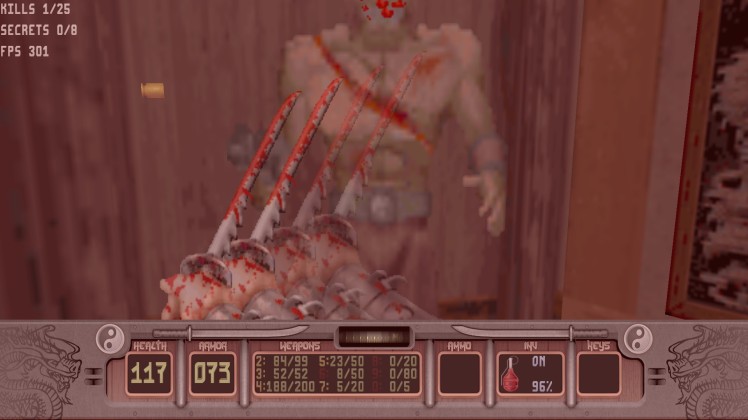 The levels are nicely contextualized while still abiding by the classic format. You might still be hunting down color-coded keys to open corresponding doors, but you might be doing so in a bathhouse or after storming the villain’s evil lair in a rowboat. It’s easy to keep track of where you have been and it’s generally not that hard to find your way around; the game completely foregoes the mazelike structure common in these games and I love that.

Lo Wang is also a comical protagonist who constantly blurts out one-liners and witty comments. He is a perverted old man who constantly talks in an exaggerated Asian accent, and takes every opportunity he can get to mock his enemies and make dick jokes at nobody in particular. A downside is that the game is fairly difficult and you hear the same jokes every time as you replay the levels.

And the game isn’t exactly challenging in a fun way. Even on the lowest difficult, the first few enemies take a lot of abuse before they go down and absolutely wreck you with hitscan weapons that deplete your healthbar in seconds. I am fairly certain that if you and an enemy both start shooting at each other at full health, Lo Wang goes down faster than that enemy. Enemies are plentiful, fast, they got a lot of health, and they are quick to attack you.

How crazy is it to have a 2.5D shooter where the first level already features enemies that can instant-kill you, who themselves can survive a direct hit from grenades and rocket launchers. You step out on that metro platform and a nearly-invisible enemy just rushes up to you at top speed, everything explodes, and you’re dead.

Your guns are very inaccurate and weak, despite feeling like they are strong. Your first weapon is an UZI with a mad fire rate and the second one is a shotgun that can rapid-fire. These should tear enemies to shreds, but both of them seem to need more than one full clip just to take down anything besides the basic demon enemy. Even the recolored variant of that enemy can tank that shotgun just fine and he’ll just shoot rockets at you for massive damage in retaliation.

This made me wonder if the game wanted you to play as a master swordsman and utilize the katana and shurikens that make up Lo Wang’s starting equipment. While the shurikens are more accurate and damaging than the guns, they run out quick and aren’t refilled as often. The sword is devastating, but useless against many enemies and certainly not safe to use in a game where so many things explode on you. Most of your arsenal is explosives, most of the enemies have explosives, and many other foes overpower you in a CC.

It’s not impossible and I could beat most stages just fine once I knew where tougher enemies spawned or saved regularly, but I don’t understand what play style Shadow Warrior expects from you.

I switched to the easiest difficult and still had a tough time, as difficulty only affects how many enemies spawn in. A shame, because I really like exploring these levels and seeing the secrets and hearing all of Wang’s commentary on them. As a comedy game, while potentially offensive to some, I really enjoy Shadow Warrior. I just wish it would embrace its own silliness and cathartic appeal. Challenging gameplay can be fun in its own right, but why must I do instant-death precision platforming while being attacked by minuscule flying enemies in my game about a a perverted ninja fighting demons?

I just came here for the naked anime girls man, don’t give me this “difficulty” nonsense.