A major sticking point for me throughout the original Wizardry trilogy was the design choice to limit player healing and level ups to the inn back in town. The games feature a single dungeon each in which players venture deeper and deeper as their characters grow in strength and they gather new equipment. But in order to exchange experience points for levels, money for equipment, or to lick their wounds and revive their fallen, players must backtrack through this dungeon and return to the surface. 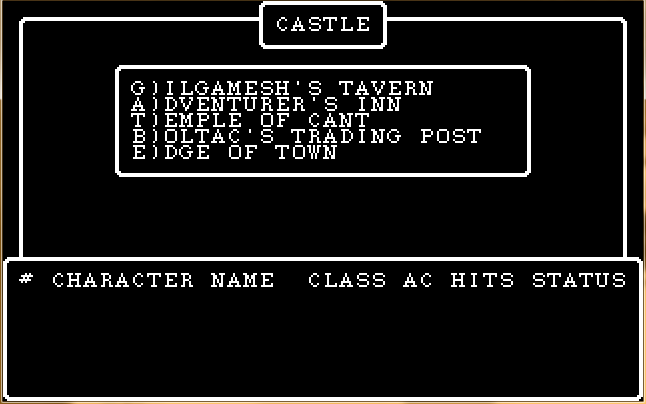 Those who are into the Elder Scrolls games might be familiar with such a mechanic, as the ES games prior to Skyrim had a similar rule where players could only level up by sleeping in a bed. However, those games had the benefit that dungeons weren’t deep, multi-floor labyrinths filled with random encounters. In a pinch, players could even nap in the makeshift bed of a goblin family they just slaughtered, so long as no enemies were nearby that would snack on the player while they were off in a dreamland.

It’s an inconvenient mechanic to the player and, in many scenarios, probably a useless one from a gameplay perspective. It’s a hold-over from old tabletop games and, in both mediums, it has been fading away as designers streamline their rules and figured it’d be more fun to let players level up whenever it’s convenient for them. It’s more fun, yet I would argue plain fun isn’t always the best goal to shoot for.

As strange as it sounds, I respect games that inconvenience players by their design.

The most obvious benefit to foregoing streamlining is that content players engage with will feel more hard-earned. Players have to go out of their way to find an inn to get their level ups, which makes those level ups feel more significant than getting that extra power in the middle of a fight. It also causes players to naturally interact with the game’s world, as they now have to go look for a place to stay like a real adventurer would.

Similarly, it might be inconvenient to contact other players to form a party in an RPG, but it makes tackling group quests and dungeons feel more significant compared to just queuing up and being assigned a bunch of random team-mates you’ve never met and will never meet again. It might be nice to warp and fast-travel all around the game’s world, but I remember how amazing it felt in Assassin‘s Creed when I finally reached one of the cities after travelling up and down the countryside for an hour with crusader armies constantly on my (horse’s) tail.

This also brings up the second issue of context. An RPG world where you fast-travel to every location will feel small, even if your lore describes it as a grandiose place. Merchants who unquestioningly buy up the player’s entire inventory for a good price are nice beep-boop robots to help the player, but consider how much more real the world would feel if merchants were picky about their wares and bartered the players down if they tried to sell them their trash.

Dark Souls, as in many cases, is a good example of these ideas done well, only to be later streamlined out. The first game had players manually navigate the entirety of Lordran, frequently forcing them to employ their knowledge of the game’s environments to reach merchants and other NPCs which offered special services they might need. These NPCs would also travel over the course of the story, making them feel like real characters with their own goals, rather than generic servants to cater to the player. It was inconvenient if you really needed to learn some new magic while wandering around the Darkroot Basin, but it made Lordran feel so much more special.

Players only received an option to warp between bonfires in the final stretch of the game, which was an effective move as the final few areas would be linear extensions to zones players already visited before, so there was no new ground to cover. Even then, the warping didn’t reach to all areas, so players would still have to suffer through The Great Hollow if they needed to (re)visit Ash Lake.

Later games backtracked on this and made nearly every NPC a static part of the games’ HUB areas, Majula and Firelink Shrine. Players received the ability to warp around from the very start and the world-design suffered for it, as there was no longer a reason to have a cohesive world filled with logical paths between areas. It even went so far as to make the very lives of the NPCs a plaything for the “hero”, as Dark Soul II allows bloodthirsty players to return murdered NPCs back to life for a petty fee.

Dark Souls II & III are still fantastic games, but they feel more game-y than the Souls titles that came before them.

This is not to say that all streamlining is bad or that all inconvenience is good. Fable III was justifiably criticized for changing its menus into an interactive pocket dimension where players switched between rooms to change equipment, spells, fast-travel, or to decide their stats and look up information. It was a constant hassle to deal with and shattered  many players’ ability to really immerse themselves in the game’s world. Nobody bought into the idea that they could pause all of time and space to pop into their pocket dimension and put on a funny hat.

Deliberate inconvenience is a precision tool. Use it excessively, and you just create problems for your game that players will constantly be upset about. Use it well and those players might still be a little upset, but the results could be fantastic and stick around in the player’s memory for far longer than the tinge of annoyance they felt at first.