My relationship with Rimworld is a loaded one. I was first forced into playing it by my friends when the game had just come out and I didn’t like it much, so it went untouched for quite some time until those same friends forced me into trying it again following the release of its new DLC. The fact that the title screen notified me that my game had been upgraded from an early version 0.x to 1.1 put into perspective just how long I hadn’t touched the game and how much could have changed. Maybe, this time, I’d be able to enjoy it just fine.

Rimworld is a base-building survival game. Through a handful of different starting scenarios, players are placed on a randomly generated planet capable of sustaining life. You need to create a place to live with your people, which involves more than just getting a roof over your head and calling it a day.

You need stable access to food, you need to be able to replace clothes when they wear down, you need construction materials, and, most importantly, you need to be able to defend it all. While the planet is sparsely populated, it is home to many other settlements belonging to various factions, which may either want to peacefully trade with you or scorch you off the planet surface. This comes on top of the local wildlife, which is a mixture of familiar Earth creatures and fantastical space monsters.

The game is a top-down style game that looks a lot like Prison Architect, which is twice as curious because both games are about laying down blueprints to have your little dudes construct once the necessary resources are obtained. The art is simple and animations quite basic, but it does the job just fine and the game has a lot of atmosphere to it thanks to the naturalistic environments and soothing soundtrack.

The game starts with you picking a place to settle on the globe, which comes with a lot of information like growth periods, climate conditions, and what types of forage and stone occur there. To be honest, I wish the game just started you somewhere random. Outside of wanting to give yourself a challenge, I don’t see why anybody would voluntarily take a bad start if you can just look around until you find a temperate area with year-long growth periods, far away from any anybody looking to do you harm.

Once you’ve selected your spot, the game generates a big, square stretch of land where you do the actual building and living.

As mentioned before, the game is controlled mostly by laying down blueprints of what you want to build. You can specify structures, furniture, machinery, decorations, there are a bunch of categories to pick from. Once you’ve laid down the plans, your guys will fetch the necessary items from the storage and go to work. This does bring up an important mechanic, which is laying down zones. Zones allow you to designate a purpose for spaces, so your dudes will always bring items to the storage zone and dump trash at the dump zone. There is a bit of automation to this as well, as the game will designate any completed building as a home zone and instruct your characters to put a roof over it. 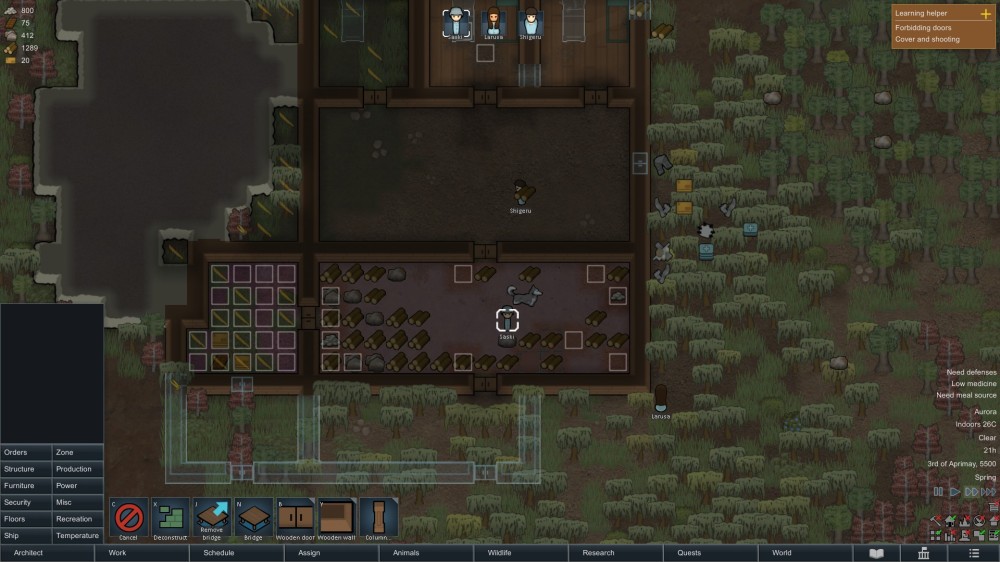 You can also issue orders to harvest, cut, mine, or perform other manual labor to certain objects, which works with a drag-to-select box. This does get complicated because not every character will do every job. If you have some frail weakling, they might refuse to do any hauling or construction, or they’ll be bad at it and suffer increased risk of messing up and wasting your resources. This takes me to the game’s most annoying feature, which is the micro-management of jobs.

You have a matrix with every survivor and every job category, where you select which jobs they will do and in what priority. For example, you might want every survivor not afraid of fire to be able to do firefighting, and you probably want that to be their top priority at all times. The berry bushes don’t need to be harvested when the bushes are on fire. However, with a good number of survivors, you may find a lot of your time going into this micro-management of tasks. You could issue an order and not see it getting done ever, as just 4 different priorities is not enough, especially when you like to plan ahead a bit. 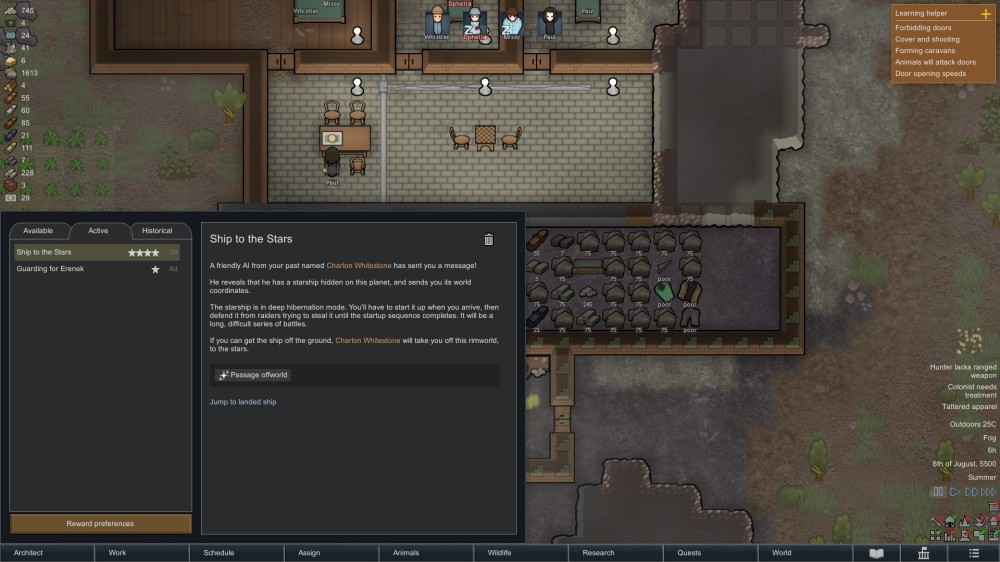 You can force an action, but this doesn’t work well either. When I had to have a wall completed to finish a room for a new inhabitant, I had to force every block of the wall individually, as the builder would run off after every tile to resume her other priorities. Likewise, when feral animals attack in packs, your hunter may just shoot one and then walk off clean the kitchen while your entire camp is eaten by cougars. It’s ironic that this system made to automate the actions of your workers, inadvertently ends up creating more hassle and micro-management for the player.

I do enjoy how much personality the colonists themselves have. Each one has a backstory, expressed through their unique traits, appearance, and jobs. One of my runs in the game gave me Terry, a caring pimp who shared his settlement with 2 young girls. Terry was a melee powerhouse, but also a gentle soul with high points in medical and socializing. He took care of his campmates, often to a fault, and also became a phenomenal cook as the settlement thrived.

Colonists improve their skills as they use them and they can change a lot as the game goes on. Somebody might lose an arm to a wild animal, but with the right tech you can replace it with something cool like a drill. Without the right tech, you might find yourself taking care of a quadruple amputee, until winter comes, food supplies run low, and that character begins looking mighty tasty to the other survivors. Rimworld has impressive systems in place that keep track of every wound and sickness, how well it’s treated, how much various colonists like each other, and what their mental state is like.

Especially the mood of your people can be troublesome. After a series of setbacks, you might find somebody going on a murderous rampage through the camp until restrained by his allies or they might lock themselves up in a room refusing to eat. You can do some nifty things to improve the mood and, if all else fails, just buy some drugs and throw a party.

Rimworld prizes itself on being a storytelling tool first and foremost. It gives you these interesting characters that have so much going on and so much room to grow and change over the course of the game. This mixes with the game’s storytellers, which are like the AI Director from Left 4 Dead. They choose the random events that happen to you based on their preferences and the difficulty you set for yourself. However, this brings me to my second-biggest problem with the game: it can take forever to get any challenging. 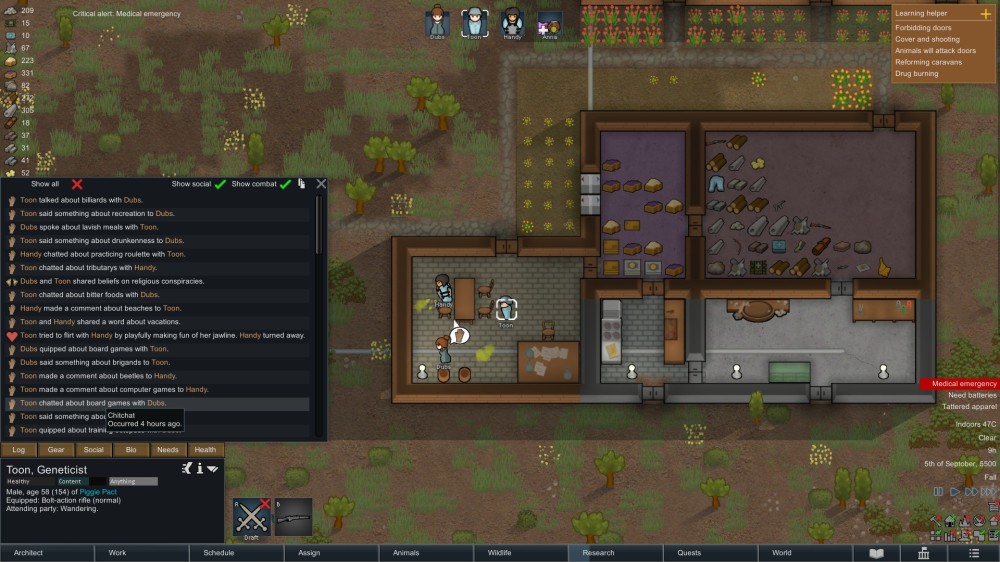 Most of my runs in the game I’d end because I just got bored with it. I’d build my base, set up sustainable living conditions, and then I’d just sit around waiting for the game to make something happen. I’d be sitting behind two layers of walls with multiple lines of defense and escape routes, just waiting for anything to try and harm me. I’d purposefully build my base in the vicinity of every hostile faction, set my difficulty as high as it would go, and still I’d only have to deal with the occasional squirrel or a naked man with a bow.

Rimworld has the potential for big battles and exciting chaos, but I could burn hours on it without any significant events happening to distract from the daily cycles of my colonists. Quests do shake this up a bit, but again, I’d frequently find myself showing up to the doorstep of some prison camp, which would just be a half-finished building in the desert protected by some dude with a spikey club. I see the potential in Rimworld‘s storytelling ambitions, but the heavy reliance on RNG means it’s all up to chance whether you get a memorable game with a Terry in it or you shut the game down and delete the save file after 5 hours of basically nothing.

I did have more fun with Rimworld now than I did years ago, but frustrations pile up quickly and aren’t offset by enough positive qualities. It has some impressive simulations going on, especially in regards to the colonists themselves and I think a lot could be done with these systems. Still, it has been 2 years since I last played, and I still find myself dealing with the same annoyances, the same micro-management issues, the same lack of challenge, and it’s still a game riddled with little problems that soured my mood whenever they popped up.

If you have the patience to negotiate with the game’s work matrix and sit through it’s sluggish research trees, then you may find Rimworld livening up in the mid/late-game when more exciting tech becomes available and you get some more freedom. Some people might be able to effortlessly burn 400 hours on this game, whereas I was out of patience after clocking 40.