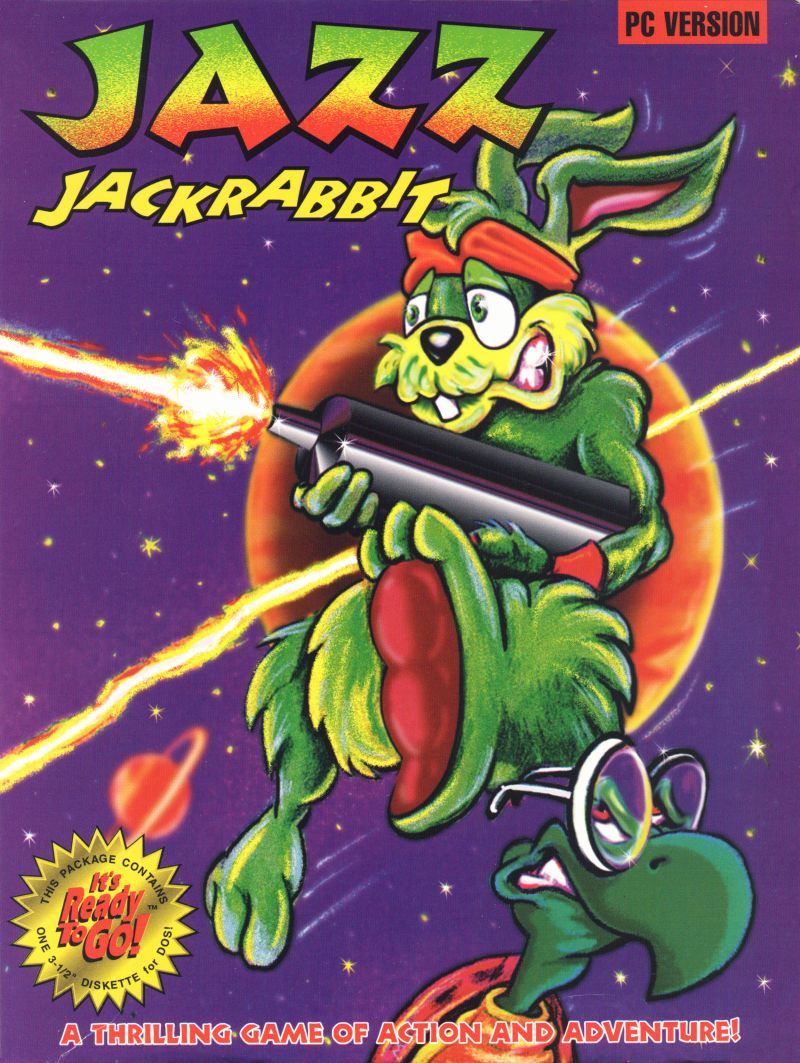 This honestly pains me. I remember having a demo of Jazz Jackrabbit back on my first computer and being enamored with the game. I was used to kid-friendly platformers like those of old man Mario, but having this cool-looking rabbit with a gun as the hero of a game appealed to me a lot. Even the title sounded rad. Replaying it now, Jazz is more impressive than the typical DOS platformer, only to hurt itself in its bid to be as cool as possible.

Jazz is on a mission to save the princess of his home planet from a geeky turtle villain called Devan who has kidnapped her and plans to blow up the whole planet. The game doesn’t take itself too seriously and that’s fine; the story just acts as a vehicle to have you tackle themed levels with bosses at the end, separated by nice cutscenes and brief conversations. 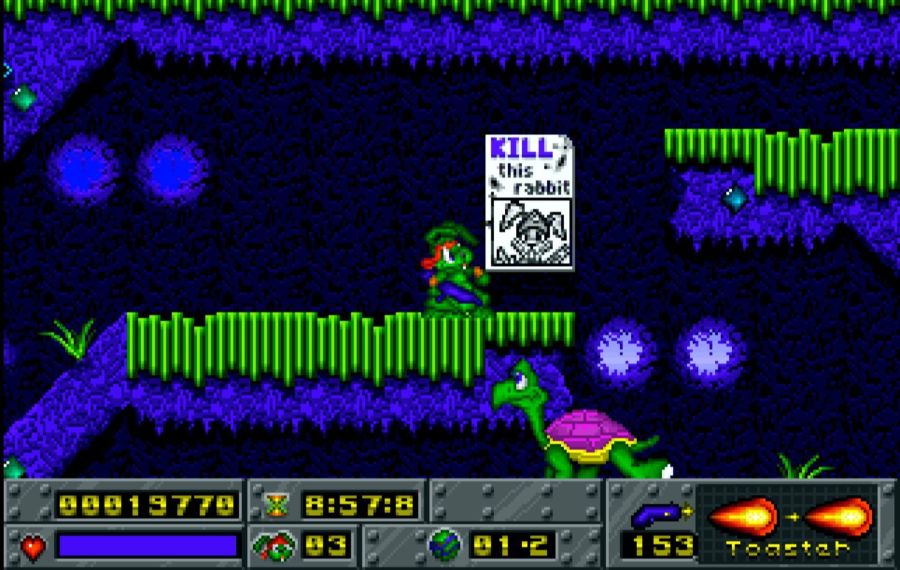 The game plays like a mixture between a high-speed 2D platformer like Sonic the Hedhehog and a standard 2D shooter, which isn’t as great of a combination as you might expect. Jazz can shoot left and right with a variety of guns, including a peashooter with infinite ammo that you can always fall back on. Guns and ammo are plentiful, but so are the enemies. Each weapon is different, but these differences aren’t too interesting and the game curiously lacks the option to shoot up and down, making enemies that fly or crawl ceilings frequently unhittable.

When it comes to the arsenal, I was particularly confused with the rockets that fire at two different angles. It was great for picking off enemies flying diagonally ahead of you, so long as you didn’t mind that the other rocket is always going to hit the ground straight ahead of you.

In their notes, the developers express pride at how fast the game is, but this isn’t a game that needed speed. The action feels very cropped, as the camera is centered on Jazz and sprites at large. You see very little ahead of you, yet you dash into the unknown at top speeds. Even when holding down the fire button, enemies can appear so fast that they’ll hit you before you do enough damage, and you can’t damage anything that is off-screen. So you have a character that is fast, even faster with power-ups, but you need to take it slow or risk taking damage at every turn.

The same applies to the platforming. Levels rarely feel like they are built for speed, outside of a few novelty segments where you don’t face many enemies. Levels are actually pretty cool and have many branching paths that increase replay value and encourage exploration. Other games might reward those who ignore pointers with a brief side-path that gives some points or items, whereas Jazz leads you to entirely new parts of the level.

However, many times you’ll find yourself having to land on tiny platforms or perform precise moves with narrow timing over spikes or hordes of enemies. The floaty controls that accelerate so fast don’t feel suitable for this level-design and the game lacks standard features like being able to move the camera to see around you. I lost track of how often the level encouraged me to jump down, only to reveal enemies that I had no way to counter without knowing about them beforehand. 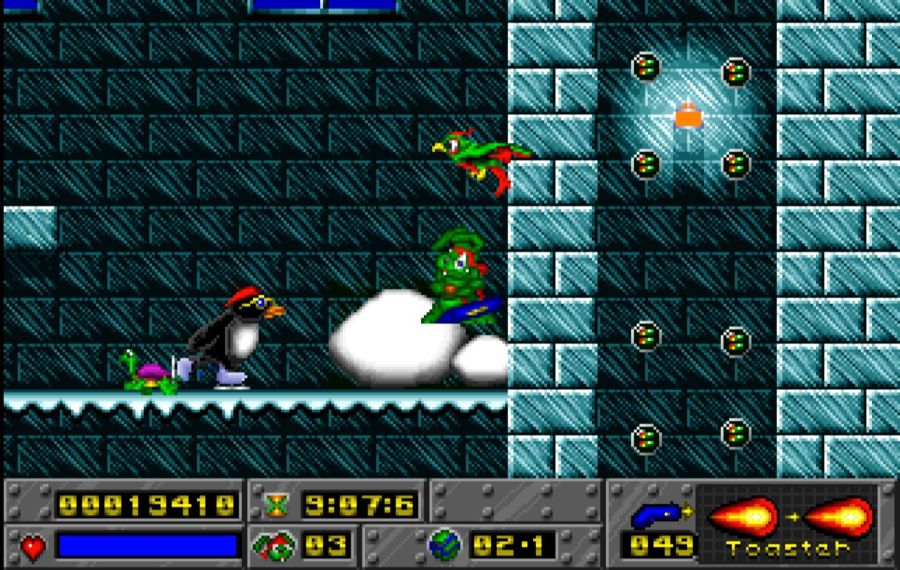 Jazz Jackrabbit can be an impressive game if you watch somebody familiar with it play through a few levels. Speed is possible if you know when to jump to avoid incoming enemies and when it’s safe to just run & gun. That mastery is, however, reserved for those who can deal with the initial frustrations and return to the game over and over again.

Despite all its shortcomings, this is still a stylish game and a mascot capable of making the console scrubs at the time jealous. With its radical art, neat animation, and rocking soundtrack, there is a lot to appreciate in Jazz’ first adventure. Fortunately a sequel would follow for Windows systems 4 years later. I can only hope that Epic MegaGames paid attention to its competitors and gave Jazz some much-needed upgrades. DOS and PC weren’t exactly known for their 2D platformers, so I’d be very excited if Jazz Jackrabbit 2 turns out to be a game still worth revisiting. It’s predecessor, though, is only recommended to nostalgic fans.