I remember being disappointed with Creative Assembly’s Warhammer: Total War when it first came out. On paper, a Total War adaptation of Games Workshop’s Warhammer universe sounded like a dream come true, but then it came out and… huh… Empire, Greenskins, Bretonnia, Dwarfs, and Vampire Counts… that’s it? Wait, I gotta pay extra to get chaos? Are you for real? 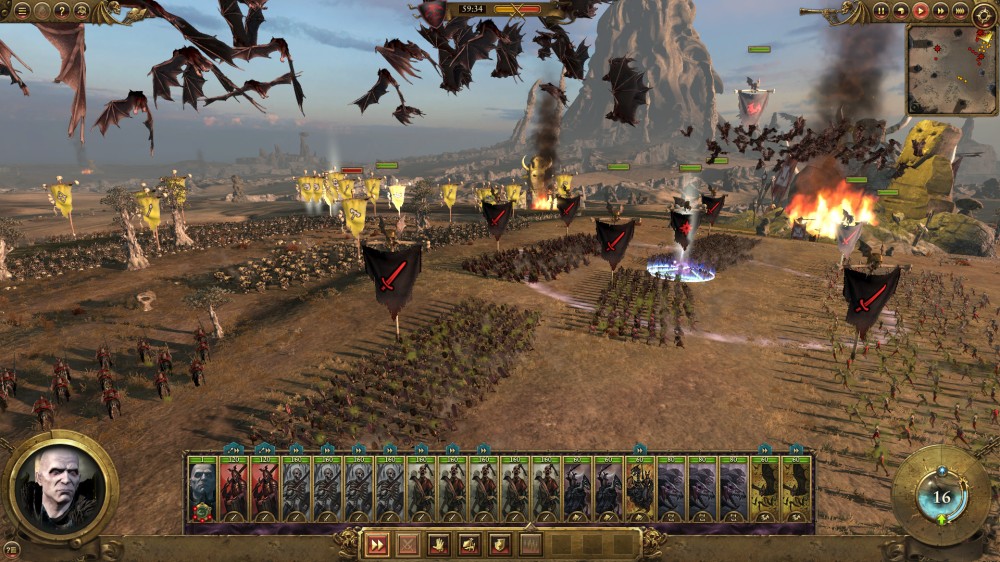 Despite all its merits, few fans of the tabletop game could look at Warhammer: Total War at release and feel like it was a complete package. This is strange, because playing it did feel like you were playing a game worth the asking price. I put over a hundred hours into it before the sequel eventually came out. Still, no Warhammer game of this scale would feel complete so long as it was lacking the factions everybody loved. Where were the Elves? The Skaven? Lizardmen? Beastmen? People love these factions from the wargame and its attached lore, and expected an adaptation by a company this big to at least feature more than 5.

We now live 4 years later and it turned out that Sega and Creative Assembly were more than happy to oblige, but not for free. The most common complaint I hear in regards to the game is the mounting cost related to its DLC. I don’t know the price in dollars, but for us Europeans, getting the whole Total Warhammer package would cost about 280 euros in total. That’s going to hurt even during the best of sales. Factions, heroes, units, even the controversial gore DLC, dedicated fans might want to have all of it.

280 euros sounds extortionate for a video game and it is unfeasible for many gamers, but the more I play of Warhammer: Total War, the more that price tag begins to make sense. The game felt incomplete in 2016, but years of updates have slowly accumulated to a point where I am beginning to feel that this game might be the most perfect realization of the Warhammer universe we might ever realistically get. Many games have been set in this universe, but none of them have ever covered so much of its world and contained so much lore.

Warhammer: Total War is now an enormous game that lets players play as dozens of characters from across 15 major factions, which can in turn interact with a wide roster of minor factions that populate the world. Iconic characters commanding armies made up of the tabletop models brought to digital life, with relations and events based on the lore that Games Workshop has crafted around its license across more than 30 years.

While it felt incomplete at first, Creative Assembly continued to develop on the game and more than tripled its content. And it should be noted that this game is more than just a strategy game where you throw fantasy armies at each other. Each faction has been made unique with its own mechanics, goals, and special events that give them a distinctly different playstyle compared to any other. Empire players must engage in politics and make difficult decisions to guarantee the stability of the loosely-federated provinces and unite them against common threats, Orcs pillage and slaughter with reckless abandon as they grow into enormous armies, Skaven infest enemy cities and occupy ruins to expand while remaining invisible to other factions. The latest DLC at this moment, The Warden & The Paunch, features a new Goblin hero that goes around the world to fight enemy armies and turn their beasts of war into new cooking recipes that buff his armies.

I am renowned for being a cheapskate, but the current state of Warhammer: Total War has opened my eyes to the idea that some games can’t exist at the standard price we have accepted from games over the years. Not because it has the prettiest graphics, but because the developer is realizing an ambition so outrageously large in scope that it outshines any comparable game in the genre. Warhammer: Total War, in its current state, could not have existed as a $60 release in 2016.

Sega and Creative Assembly are, however, not free of blame. Ambition can stand side-by-side with greed. The original base game still goes for a set $60 4 years down the line with no indication of a price drop, Realm of the Wood Elves and Call of the Beastmen are overpriced, and I don’t exactly buy the excuses surrounding the game’s gore DLC or why it was necessary to sell it to people twice. Still, I do look forward to the third entry in the series and all the potential it holds. Who knows how far Creative Assembly will be able to take it. All I know is that I foresee myself putting many more hours into this series.