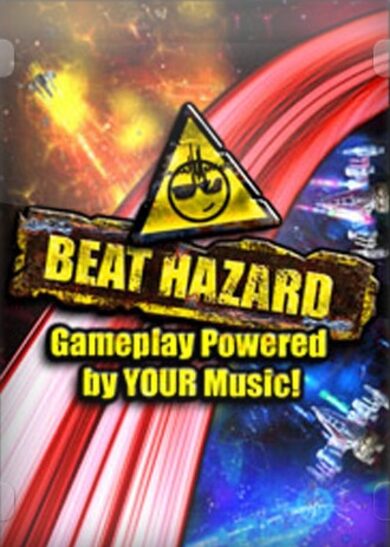 Beat Hazard… now that’s a name from my past. After Audiosurf came out, I became a big fan of these games that take your music and turn it into gameplay, but Audiosurf is a tricky customer and requires a lot of focus and precision. Beat Hazard seemed like a cool, action-oriented alternative and I enjoyed it a lot in the years where I studied IT and had a lot of downtime between classes. I haven’t touched it in years, until I saw the upcoming Humble Monthly and noticed it had a sequel to this old favorite in it.

I am glad to report that Beat Hazard lives up to my nostalgic memories of the game, though the passage time has made it a little finicky. The game is a top-down shooter with a static screen where you control a little spaceship and enemies can swarm in from any direction. The unique selling point is that everything that usually determines the pacing and challenging of such games is decided by whatever music or audio file you tell the game to read.

There are some interesting calculations going on that determine how many enemies there are, how aggressive they act, and even what paths they follow. This comes on top of more noticeable stuff, such as seeing them move faster when your music is going full speed, whereas they might come to a standstill and your weapons turn into peashooters when the song slows down or has a quiet portion in it.

Compared to Audiosurf, it’s less obvious how your song is shaping the gameplay, but Beat Hazard makes for more exciting gameplay that would still be fun even if it wasn’t using your music. It’s an intense and satisfying shooter that forces you to keep moving and adapt to new situations. The enemies like to keep you on your toes and there is a variety of tougher types in there that require more tact and precision to take down. You yourself have some special weapons to help you out in a pinch and I found that the survival mode especially forces you to wisely ration them. There are also power-ups to collect that increase the volume of the music and increase the power of your guns; a nice level of complexity.

The boss-fights are especially good at shaking things up, though I did notice that the game wasn’t always as tactical with placing them. There are often long lapses in the action and the game would frequently initiate a big wave or boss battle right at the end of a song. This is, again, where Survival comes in handy, which is a mode that randomly picks the next song in the same folder and continues the gameplay. This does mean your mileage is dependent on how you have you music files stored. Beat Hazard also doesn’t have the most convenient browser, so having your music efficiently organized will spare you a lot of headache in the long run either way. If all else fails, you can also just press a button to bring out your operating system’s own file explorer. 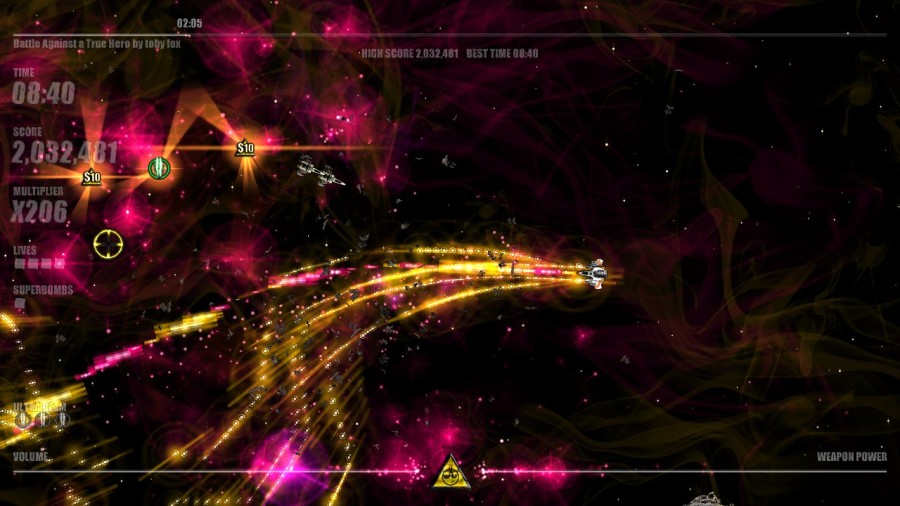 Beat Hazard is pretty kick ass, but it can be too visually intensive for many. There are a lot of flashing lights and everything is constantly pulsing, making it kind of tiring to look at. You can tweak the intensity somewhat and the game does a decent job at making enemies and projectiles distinct, but it can’t fully prevent these from blending in when the visuals get hectic. Sometimes you’re effortlessly plowing through a song unscathed, sometimes you get killed 3 times in a row and never noticed what even hit you.

The only issue I couldn’t work around in this game is it’s lackluster progression system. Every round in the game rapidly fills up an experience bar that gives you a new rank and permits you to pick a new perk. These perks you upgrade with money looted from enemies and I found that it trivialized the challenge somewhat. With the time I put into the game way back, I now started every song and immediately got pretty much every power-up at the start and more weapons than I knew what to do with. 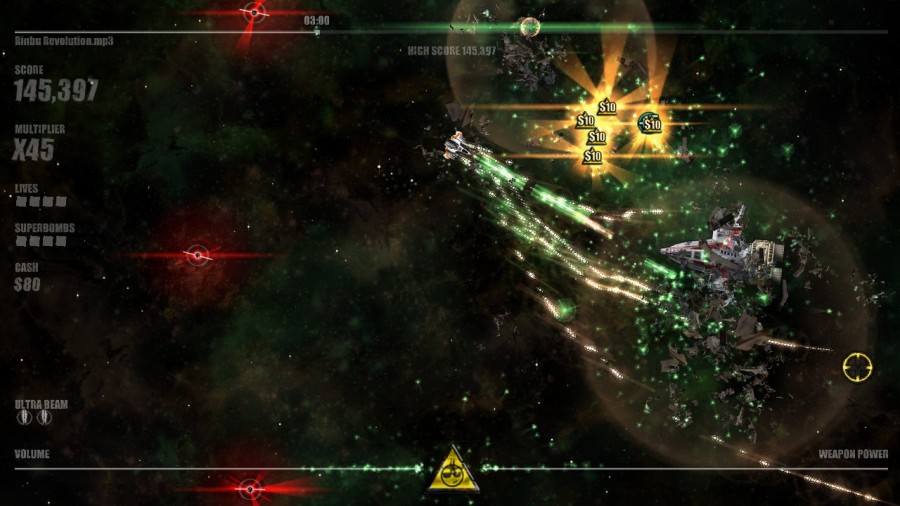 Having rediscovered my fondness for the game now, I feel pretty juiced up for the sequel. I have a wishlist of features I’d like to see in it and a better way to access music would be at the top of them. I read that the developer was looking into integrating access to music streaming platforms and that would be godsend. Still, this original game is very recommendable if you’re on a budget and have your music stored on your computer or don’t mind swapping out CDs.