Capitalism was a fun business simulator with fantastic depth to it. It’s not easy to sell people on the idea that managing supply chains could be a fun activity, but this game did well for itself and developer Trevor Chan graced us with a sequel in 2001. While some took issue with the game and its supposed dumbing down, I actually find that it adds a lot of value to the series and is worth considering if running old DOS games is not your cup of tea.

In Capitalism 2, players run a business empire, potentially from start to finish. You can set up retail stores that sell products directly to customers, but you can also own the factories making those products or even the mines, farms, lumberyards and oil wells that provide those factories the raw resources needed to operate. Heck, you can even have a hand in the marketing of your products. Is the newspaper charging too much for ads? Just buy the whole newspaper!

Like in the last game, this complicated work that usually requires hundreds of educated employees is made easier, though not easy, thanks to the simple interface. You can just click on the build icon and put down a building somewhere, which are neatly categorized and abide by common sense. You, of course, want retail stores near busy civilian centers where land is expensive and business thriving, but your factory supplying that store? That you can probably stuff away somewhere on the outskirts of town where the rent is pennies.

Each building has a grid of business units that fulfill easy-to-understand roles. At its most basic, you’ll want to equip your store with a purchasing unit that buys items and a sales unit that sells those items to customers. You can add in an inventory unit to store excess supplies or an advertising division to market a product, but the game eases you into experimenting with such options; they are not required.

Producing your own goods is a tad more complicated and can require a few attempts before it’ll click with you. The game does make it easier thanks to the manufacturer guides, with which you can look up how to make any specific product, or you can look up resources like steel or timber and see what you can make with those. My advice to any newcomer: check what the seaports are selling in terms of raw resources and what you could make with that, keeping in mind it shouldn’t be something that another seaport is already selling. It’s an easy way to get your foot in the door of manufacturing without having to also invest in expensive facilities to make your own resources on top of that.

If all else fails, a lumberyard + a factory that makes beds is still absurdly overpowered.

Here, I feel the game is conflicted. The tutorial campaign does go into manufacturing, only to make you produce goods that are already being sold by the seaports, and yours are going to be worse, setting you up for failure. The first proper campaign mission then immediately tasks you with selling computers, which are some of the most difficult to produce on your own and you’ll have to get your own raw resources on top of that. It really trips you up and made it seem like the game is a lot harder than it really is. 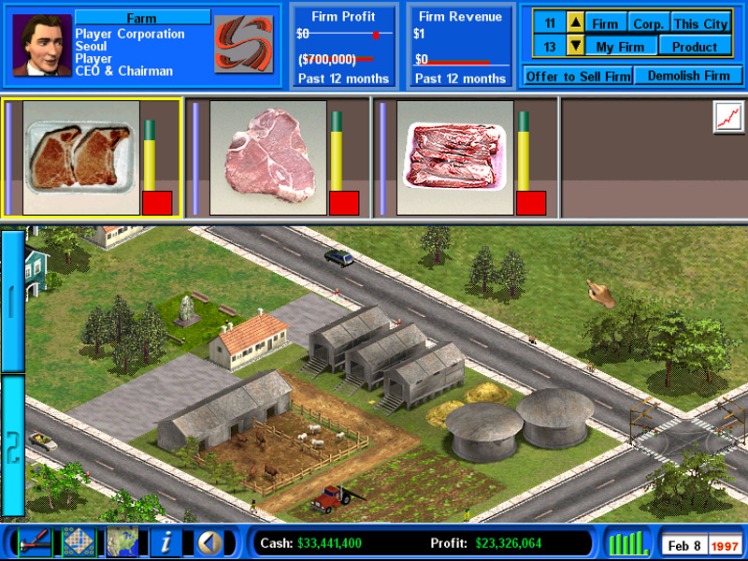 In actuality, Capitalism 2 features a lot of improvements that make the game much easier than its predecessor. For example, A lot of the business unit stuff is automated now. You can just look up what you want to make and browse a handful of preset production chains, many of which are super optimized and will continue to be useful even to experienced players. It will even auto-link to any seaports that sell what you need or buy up your own supplies if you are self-producing.

The biggest change coming from the original is the perspective. Capitalism had its focus on the business end, offering a zoomed-out world map with a “boring” close-up of the land next to it. The screens were tiny and unexciting. By comparison, Capitalism 2 cuts out the big area that separates major location and just gives you a close-up of the cities from an isometric angle. There is a rustle & bustle to each city with a lot of decorative elements and a less serious presentation overall, which fans of the original didn’t entirely appreciate.

The randomly generated world maps used to be a big feature and now all that terrain is reduced to just a portion of unsettled land near each city, which also means resource wells are more clustered and sometimes weirdly-placed. I certainly raised an eyebrow when somebody apparently built a playground over a well of chemicals or when houses had apparently been constructed on top of a gold vein that would make El Dorado seem like chump change. You instantly switch between cities with the arrows besides the mini-map, which can get confusing if there are many to switch between; cities look so alike that keeping track of where each business is located can get annoying.

Control-wise, the game also drops a few balls. The moment you start any game, the timer is already running and you don’t have any quick way to pause like you did in the first game; you gotta click on this speedometer and move the arrow all the way to the left. You also need to double-click almost anything and the game struggles to process this, which often left me furiously clicking away until the game caught up with my intentions. Why do I need to double-click to confirm my selection on a drop-down menu?

While these are shortcomings that weren’t present in the original, Capitalism 2 does add a whole lot more buildings. You can pick between various sizes for factories and buildings, which increases their storage capacity and efficiency, and there is a greater distinction in the retail buildings. You can still use a generic discount store that’ll sell anything, but it’s worthwhile to pick a store type that specializes in something. You don’t have to worry that your rival’s supermarket might make moves on your sportswear business anymore, which also limits how much seaports can hurt you and how easy it is to depend on them. 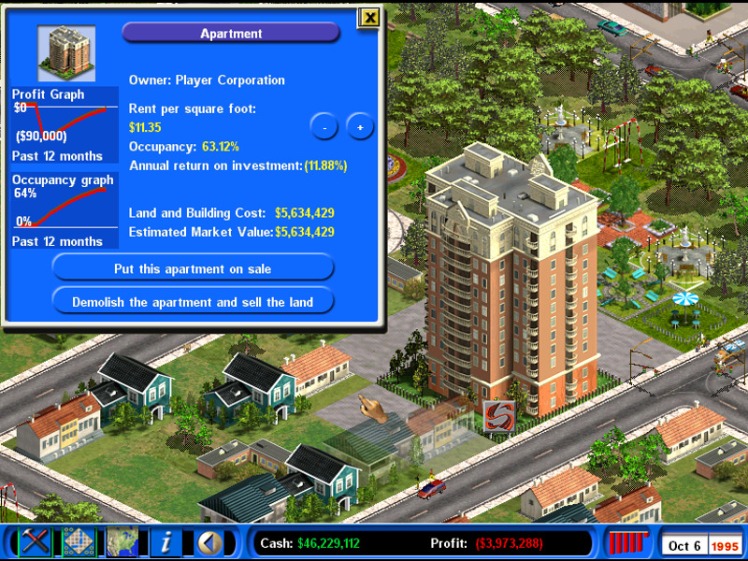 This alone completely changes how you approach the game and changes your relationship with any rival company out there, as you no longer necessarily have the ability to compete in the same markets. You can also still play the stocks game and slowly buy out competing companies, which has only gotten more interesting thanks to these changes and various quality-of-life improvements.

Capitalism was a classic DOS game and I feel it still has its own place in the series. The serious visual style makes it look more like enterprise software, whereas Capitalism 2 is more of a sim game, even though their gameplay is so similar. Capitalism is also just easier to control and more to-the-point, whereas this sequel has more options overall. To fans of Tycoon games and other casual management sims, I recommend Capitalism 2, whereas its predecessor I recommend to people looking for a more serious management simulation without bells & whistles.