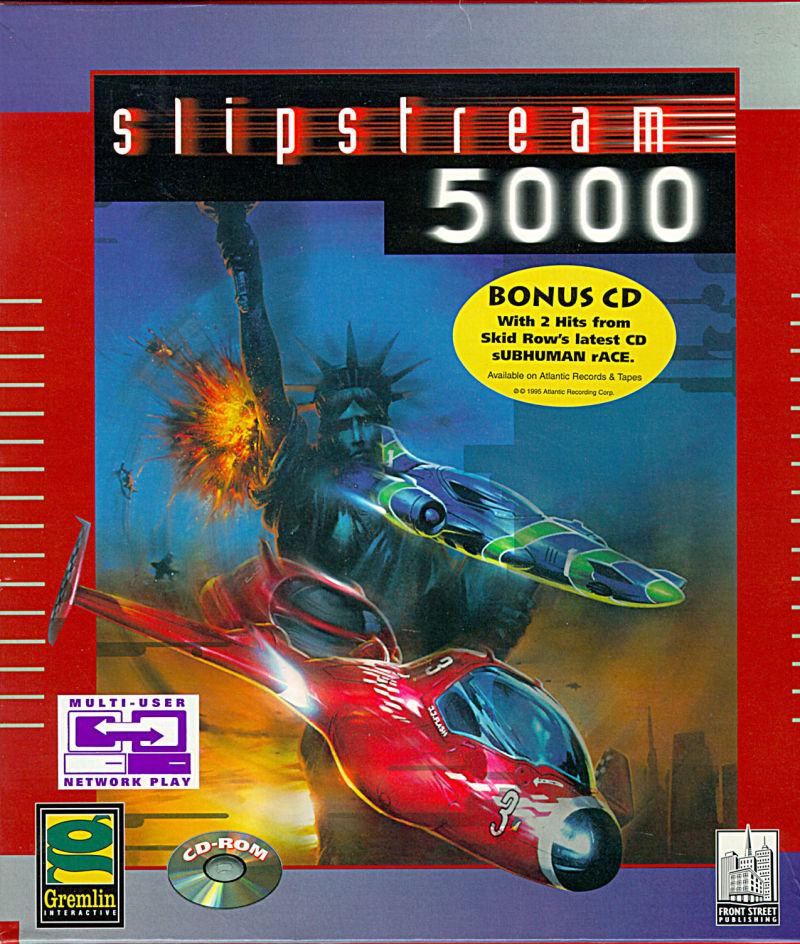 When I recently reviewed the indie racing game Slipstream, my search for information turned up a racing game from 1995 called Slipstream 5000. There is no relation between these two besides the title and genre, but the coincidence was entertaining enough for me to buy the game on GOG to see which of the two was better. The answer, overwhelmingly, is Slipstream the indie title.

Slipstream 5000 is a racing game based on flying ships, each of which is controlled by a heavily stereotyped pilot. The gruff ubermensch Horst flies a ship called the Luftwaffe, there’s a native American pilot called Shaman, you got several comedy Asian types to pick from, you get the gist. The game’s sense of comedy is very basic and predictable, especially when it comes to the announcers and the smacktalk during the races themselves. I personally didn’t care for it, but the cheesy 90s “dudebro” attitude of the game will appeal to some.

The races themselves are dizzying and, at their best, very exciting. The ships control as you expect them to and there’s a satisfying amount of skill to using them. Getting the hang of taking tight corners or knowing when it’s best to break takes quite a lot of finesse, making it satisfying whenever you get that perfect lap and best the developer’s time for that track.

Simple controls make this a real case of easy to learn, hard to master. you control the ship with the arrow keys and accelerate with space. Ctrl swaps between your blaster, turbo, and optional weapons, which you use with Alt. That’s all there is to it. At first I thought it was a shame there was no mouse control, but the arrow keys work just fine and are comfortable to use in combination with the other keys.

You can practice tracks on your own, take on an standalone race, or try your luck with the championship, where you take on each course in succession. Actually, scratch that. You have to do the championship, because every stage aside from Arizona is locked off until you completed them there. Oh, and be sure to properly exit the mode too, or the game will just not register that you unlocked any stages at all. Sorry?

The championship mode is fun, but the stakes are high and the competition cutthroat, which isn’t exactly a plus. Making it through the game’s harsh courses in hard enough as it is, but with enemies around it can be incredibly frustrating, bordering on unfair. They seem to use their weapons almost exclusively on the player, most of which are incredibly powerful. If they don’t just directly damage your controls and engines, they might force you to a complete standstill or cause you to suddenly spin out, losing a lot of time.

Weapons are all homing and auto-targeted, so there isn’t really any counterplay you can make to avoid them. And while the weapons are finite, everybody gets a recharging blaster which reduces your speed with each hit and slowly eats away at your ship’s systems. While you’ll definitely notice that your speed and maneuverability decrease, it’s also just incredibly annoying to constantly have the AI pick away at your health while the same sound-effects and voice-lines play over and over again to notify you.

The AI doesn’t cheat as aggressively as in some other racing games, but it’s certainly coded to at least be a little unfair. I already mentioned how they specifically target you with the special weapons, but the AI also viciously chases you to the point of senselessness. They always take the fastest routes through the tracks, but will chase you into the pit stop or down worse routes just to keep shooting at you. They also get random speed boosts, which they usually apply to grab power-ups just before you can. These might be them just using the turbo in short bursts, but the timing and frequency seem way off compared to how the player’s turbo works.

Those power-ups are another matter. These are dropped by white planes when you shoot them down and come in five different forms. There is a repair token for your engine and one for your controls, there is a refill for your turbo, an instant boost that acts as a mini-turbo, and a red token which inverts your controls. In championship mode, the planes can also drop green money tokens. It’s a basic assortment of stuff, but the way the planes spawn usually guarantees their contents will be picked up by the players at the head of the pack, leaving nothing for those trailing behind.

This makes it increasingly hard to catch up with racers who are already winning, since they keep getting boosts, repairs, and turbo for free, while the other racers need to take an inefficient route to a pit or continuously cope with reduced speed and handling.

Does this ruin the game? No… It’s a big shame and very annoying to deal with, but ultimately Slipstream 5000 is just too cool to play for some obnoxious AI and balancing issues to ruin it for me. The stage design is so intense and the presentation is fantastic. The visuals are great for 1995 and are appealingly retro nowadays. The voice-lines also sound great and, while definitely racially insensitive, it must be said that the game has a lot of personality to it.

There is a place in this cruel world for both Slipstream games and I’ll certainly be revisiting both of them from time to time. However, there’s no denying that Slipstream 5000 drops the ball in some important fields. I like playing it a lot, but it can be a right pain the ass sometimes.