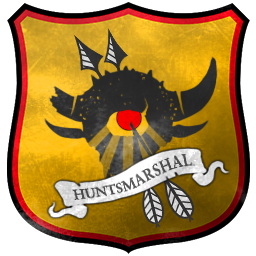 Repanse de Lyonesse may have journeyed to the distant lands of Araby for a sacred quest, but many other Old World nations set sail for more selfish reasons. One such an example is Markus Wulfhart, a legendary hunter from The Empire who has landed in distant Lustria, specifically to plunder its riches and slaughter natives for the glory of The Empire.

The Huntsmarshal’s Expedition is a fantastic faction and probably one of the most interesting campaigns available in Warhammer: Total War II.

It’s an Empire faction with access to the same troops and buildings as Karl Franz and similar lords. However, you are not expected to really build and recruit these yourself. The Expedition starts in Northern Lustria and your main source of recruits comes from reinforcements that arrive from overseas. The Empire wants you to carry out Franz’s mandate and turn Lustria into an Imperial colony, so the more trouble you cause, the more frequent and powerful your new arrivals will be.

While it feels amazing being given handfuls of powerful units for free every few turns, it does come at a cost. Markus and his friends find themselves in a precarious situation; far from home and friends, surrounded by enemies on all sides. The Expedition is almost entirely barred from diplomacy with native Lizardmen and suffers debilitating relation penalties with the nearby Orcs, Vampire Pirates, and Skaven. Allies are few and far between, and major powers like the nearby Elves of Ulthuan may prove reluctant to open up trade with such an unpredictable conqueror.

Markus’ campaign is governed by an acclaim meter that builds up as you defeat foes, build ports, and capture settlements, but doing so also increases the hostility meter. Like a Grand Theft Auto wanted system, the AI will become fiercer and more powerful the higher your hostility goes. When maxed out, the game will just spawn a powerful Lizardmen army anywhere in your land, like an Eye of the Vortex intervention army, and you’ll have to just deal with that. It makes for a high-risk, high-reward system, as a high hostility also means The Empire will speed up its reinforcements. It’s a fun system to interact with.

Another cool touch are the legendary hunters that join Markus on his journey. These are unique heroes with interesting stories to them, which you work through by completing specific objectives that gradually unlock new rewards. Their stories are well-written and reflect nicely on Markus, who comes of as a very sympathetic and caring character as he helps his companions on their personal journeys and comes to care about their plights. Sometimes you’re even asked to make decisions about how their story develops, which results in them gaining different traits and items.

While definitely a nice touch, the objectives themselves are always the same across different playthrough, which harms the replay-value of the campaign somewhat. In similar fashion, a lot of the special events for the Huntsmarshal feel a bit samey, with the same decisions attached to them that don’t even always make much sense in context.

Another major shortcoming is the all-too-familiar issue with victory conditions. It would have been fun to have an Empire army that thrived on raiding & plundering, perhaps requiring Markus to send a specific amount of gold & resources back to his homeland. This could then maybe have tied in with mechanics where you could fight pirates to increase the amount of wealth that actually makes it overseas. But no. Instead Markus just has a generic campaign that basically requires him to conquer the entire continent and wipe out a number of other factions. It’s passable, but a missed opportunity to do something unique.

The Huntsmarshal’s Expedition is a solid recommendation if you have Warhammer: Total War II and have yet to play it. It’s a fun way to experience The Empire roster and it can be a satisfying challenge having to juggle so many enemies and such inhospitable terrain. It’ll be especially rewarding for fans of the lore, as this is a very plot-driven faction that comes with frequent reading material to indulge in.