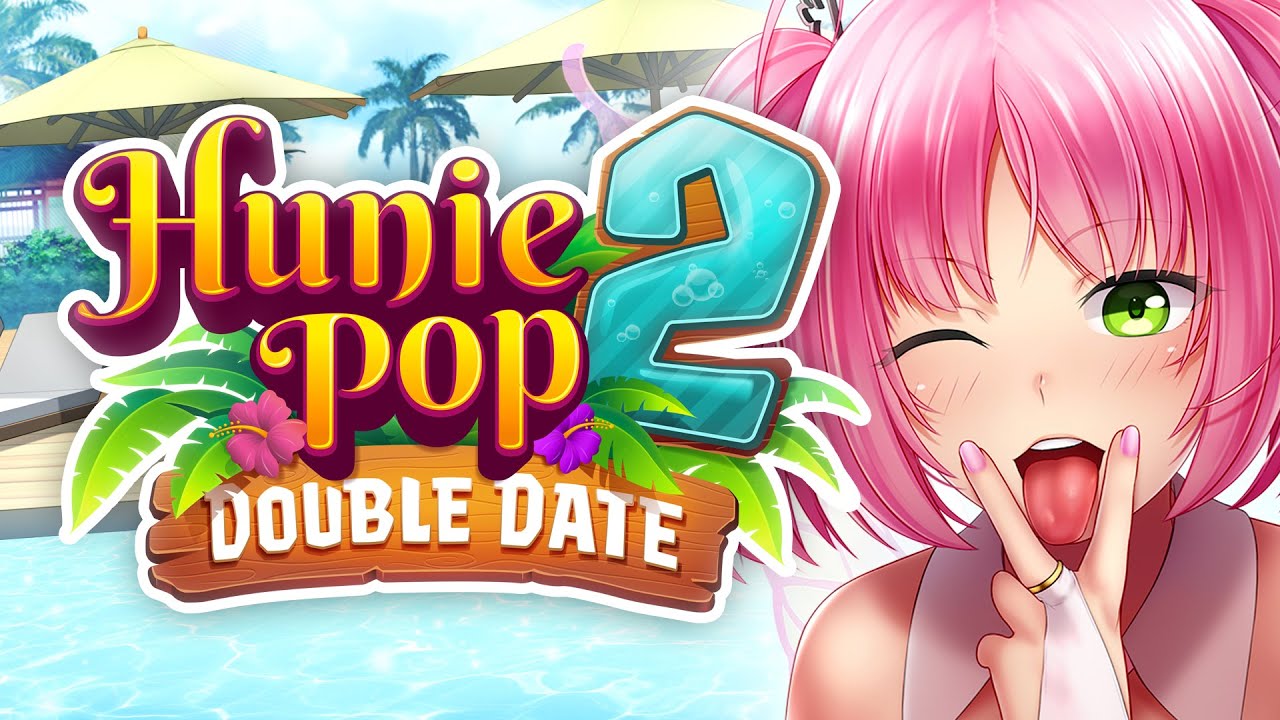 Some time has passed since the events of the original game. Once a lonely incel, our unseen player character has now been turned into an unstoppable sex machine. After yet another night of sleeping with a fashion model, Kyu the love fairy reappears into our life to inform us of an incoming apocalypse at the hands of two cosmic deities. The only way to prevent this from happening is by awakening them prematurely and having a three-way with them…

Look we can sit here and argue about the lore implications all day, but it’s not super-important.

Kyu takes us to the island nation of Inna de Poona, a tropical holiday resort famous for its lustful visitors. Here we have to seduce a cast of potential lovers and convince them to partake in some group activities.

The diversity is very nice and it certainly makes the game unique, but not everybody in the cast I found to be likable at all, whereas I had no such issue with any character in the first HuniePop. Sarah and Candace are characterized as being obnoxiously loud and stupid, Lillian is an angsty teen who can’t have a single conversation without talking about suicide, and Abia, the much-advertised Muslim inclusion, is obsessed with sex and will similarly work it into every line of her dialogue.

The writing as a whole feels a little off in this game. An effort is made to characterize the girls, so you can ask them various things and sometimes they’ll bring up parts of their backstory of their volition. However, these stories are often jarringly grim and horrendously out-of-place in this otherwise carefree comedy game. The game brings up topics like depression, religious persecution, abortion, and drug addiction, and you can’t meaningfully engage with any of it.

Jessie is a good example. She is a single mother and former pornstar, who is now becoming irrelevant to her business due to her age. She is an alcoholic and a lifetime of smoking has left her lungs severely damaged, leading to painful coughing fits. On top of all that, she has become increasingly estranged from her daughter, which has contributed to her developing a depression. All of this is brought up in conversation, but none of it leads to any kind of story or character arc. You just listen to her when she talks about regretting ever having a child, just to get an extra move when you take on her a pool date right after; it completely brings down the mood and is very fucking weird.

You could say that you needn’t take it seriously and the overall plot is certainly ludicrous, but I found this too hard to ignore, especially now that the characters get more dialogue than ever before.

A saving grace here is that the gameplay is much improved. Double Dates work largely the same as normal dates did in the first game, but with the added twist that you need to divide your attention. The date has an overall score meter that you need to fill up to succeed, but both girls have their own passion & sentiment to manage, as well as their own preferences for what tokens they like. It’s fun clicking between the girls to maximize your score, but it’s also tricky because you got a stamina meter now.

Matching tiles drains the stamina of the girl you are focused on while it slowly regenerates for the other. When you drain their stamina, the girl becomes exhausted and you are forced to focus on the other until it has sufficiently regenerated. However, girls will also ignore you temporarily if you lined up a row of broken heart tokens and, if both girls are exhausted or angry, then the date is dead in the water. Better luck next time!

It’s a fun gameplay challenge and you can stack the odds a bit before a date through gifts & food, but I enjoyed the vanilla challenge of juggling the stamina meters and maximizing my score. Dates also benefit from some much-needed tweaks that I specifically asked for in the first game, such as showing you what tokens a girl likes instead of asking you to memorize them, or the nerfed date gifts that made things a little too easy in the original.

Another neat inclusion is the baggage system. As you chat with the girls outside of dates, you have a chance of learning about their past and personality. This unlocks new gifts in the shop, but also introduces new rules for the dates specific to that girl. For example, Lailani is upset with her island nation being treated like a sex island and will be angry with you if you match a line of red sexuality tokens while focused on her. This creates a fun layer of extra challenge to strategize around. For example, Lilian’s edgy nature means she reacts positively to the otherwise dangerous broken heart tokens, so I could switch attention to her whenever I had to clean some from the board.

It’s a great take on the trusty foundation of Bejeweld gameplay, which makes it strange how little the game wants you to actually do it. The first HuniePop game had you work through five increasingly-challenging dates to “complete” a girl, which also provided you with pictures that got lewder as you progressed that relationship. It was a fun system that provided a nice balance between gameplay and sexy rewards. In HuniePop 2, each combination of two girls progresses independently, but each only has two dates to it.

This is a problem for several reasons. From a storytelling perspective, this gives the imaginative characters very little time to shine, as even the most unlikely couples are rushed through a mini-arc in a single date. Gameplay-wise it leaves the challenge curve rather flat and makes for a very short game, especially tragic because the gameplay is such an improvement over the first. But most fatally of all, it’s a tragic loss for “the presentation”.

Not only is the bulk of the game very short, but it then also concludes one of the most obnoxious boss battles I have played in a long time. It’s such a leap in difficulty and blatantly pads out the otherwise thin runtime by making it incredibly round-about to prepare for the encounter. Combined with the repetitive dialogue each time you lose and retry, this left me with a bad aftertaste when I finally completed HuniePop 2.

Its gameplay is a nice innovation on the original, but the characters this time around were off-putting for various reasons, the game was significantly shorter, the artwork was kinda boring, and the difficulty leap at the very end was not appreciated at all. I constantly found myself wishing I was playing the first HuniePop instead, even though I had to admit the uniqueness of the characters made this sequel appealing in its own way. I just wish that appeal was better utilized.