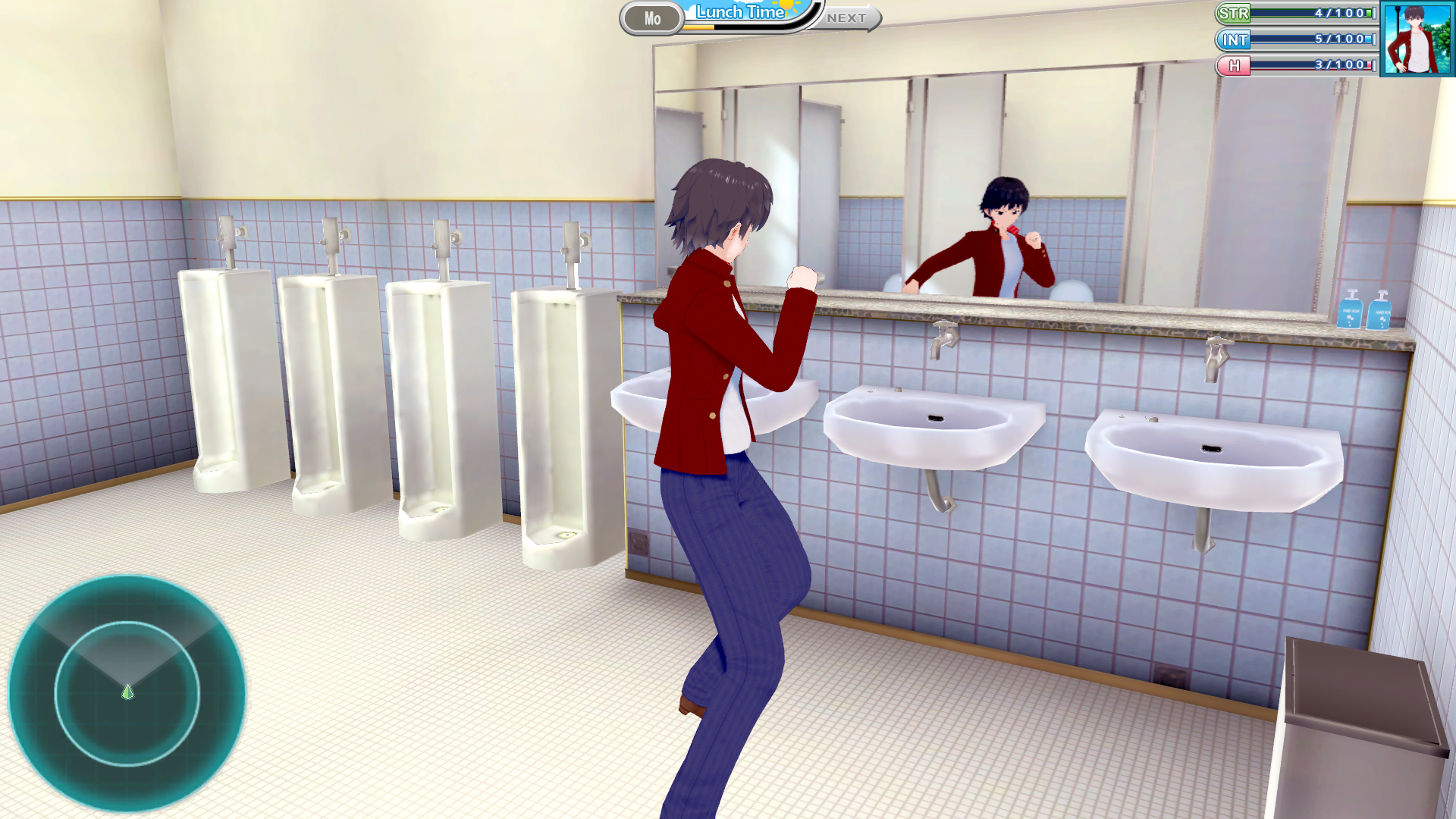 After starting a new game or adding a new girl to the class roster, they start out by default as having no relation to you. Go up to the girls and initiate an interaction by right-clicking on them. You initially work towards friendship with the girls by using either the talk function or having them ask you a question to answer, which fills the relationship meter wrapped around their portrait. This process will be more effective the higher your avatar’s intelligence.

Additional romantic scenes can be found by confessing to girls or accepting their own confessions. The likelihood of this happening (or being accepted) is again based on the relationship meter.

Bedroom scene: Once a girl has been turned into a girlfriend, suggest walking home with them at any time during the afterschool timeslot. Usually this results in a friendly scene, but with girlfriends you receive the option to have them come home with you instead.

Dates: Dating a girl results in a few conversations, but with the After-School expansion you get more choice. Simply approach a girlfriend at school and ask them on a date, which always take place on Sunday. If you already dated that girlfriend once before you’ll be given a choice between different date spots. As you keep dating, these will result in various special H-scenes.

There is no penalty for having multiple girlfriends/lovers or even being caught cheating. Subsequently, there’s no purpose to breaking up either unless you want to make the girls sad.

Throughout each school day you’ll find female students suspiciously making their way to empty classrooms or rarely-visited corners of the school. If you give chase while using stealth (Z to crouch, Shift to slow-walk) you may catch the girls going at it themselves or engaging in a lesbian scene. Approaching carefully and pressing RMB will allow you to peek at these activities. This also works in the showers and toilets, though less stealth is required in those cases.

While spying on a lone girl, you’ll be presented the option to intrude on her fun by pressing a button. This triggers an H-scene, but this option is only available if you already romanced her before. This means the option can’t be used as a shortcut to romancing a girl. Additionally, if you are spotted while sneaking, the girl(s) will be embarrassed and run away from you for a while.

There are 2 ways to trigger H-scenes for groups, both of which are complicated. These will only work if both girls are “experienced”, referring to the level of each sexual category the game tracks. In other words, you need to bone them silly quite often before this even becomes available.

Option 1: Initiate an H-scene with girl 1 while near girl 2. If both girls are experienced, both their moods are just right, and their H meters are high, then you have a chance of being offered the prompt to invite the second girl.

Depending on how many students you have, this may prove to be nearly impossible to achieve. It takes a lot of play time to set up the prerequisites, but you are then also dependent on sheer luck whether events trigger properly or the correct girls will randomly decide to hook up. Considering how underwhelming the 3-way scene is, I’d recommend just setting it up in Free H mode instead of trying to pursue it in the story.

Throughout the school are various Special spots where you and a sexually-available girl can engage in a semi-unique scene with a limited amount of positions. To make these available, simply get a girl to follow you through the interaction menu. If they are interested in romance, then large icons with red a heart will appear above these locales. Note: this is different from the red heart icons marking opportunities to peek on girls.

As of today, the following locales have special H-scenes:

These scenes are easy to trigger by using the Koikatsu Club to meet with a girl at a set location or by calling a girlfriend with your phone when already at the right spot.

The Darkness expansion comes with a special, more violent scene where a girl is forced into a 3-way with you and the school’s janitor. Hence the unsettling name. Only a select few personality types are compatible with this DLC, so prior to triggering this in story mode, consider going into Free H to see which characters are suitable.

To trigger the Darkness Scene, take a non-virgin girl with a compatible personality type to the 3rd floor hallway. Between the stairway and tea room is an inconspicuous door that houses the janitor’s closet. If the two conditions (non-virgin, suitable personality) are met, then a hand icon will appear by the door.

Since the 3rd floor is not often traversed, the easiest way to achieve this is by making a girl follow you there, using the Koikatsu Club to direct a girl, or by calling a girlfriend on her phone.

Each day is cut into 3 pieces, each of which will spawn an event character. These are either 1 of 4 love interests or a female teacher. In the case of the love interests, they may be represented with a star-shaped EVENT icon instead of actually being physically present in the school.

The teachers are also available for romance. Simply make sure to talk with them a few times whenever they appear in a timeslot, and they’ll eventually force you into an H-scene. Afterwards a meter will be visible in the class overview that tracks when their scene may be repeated.